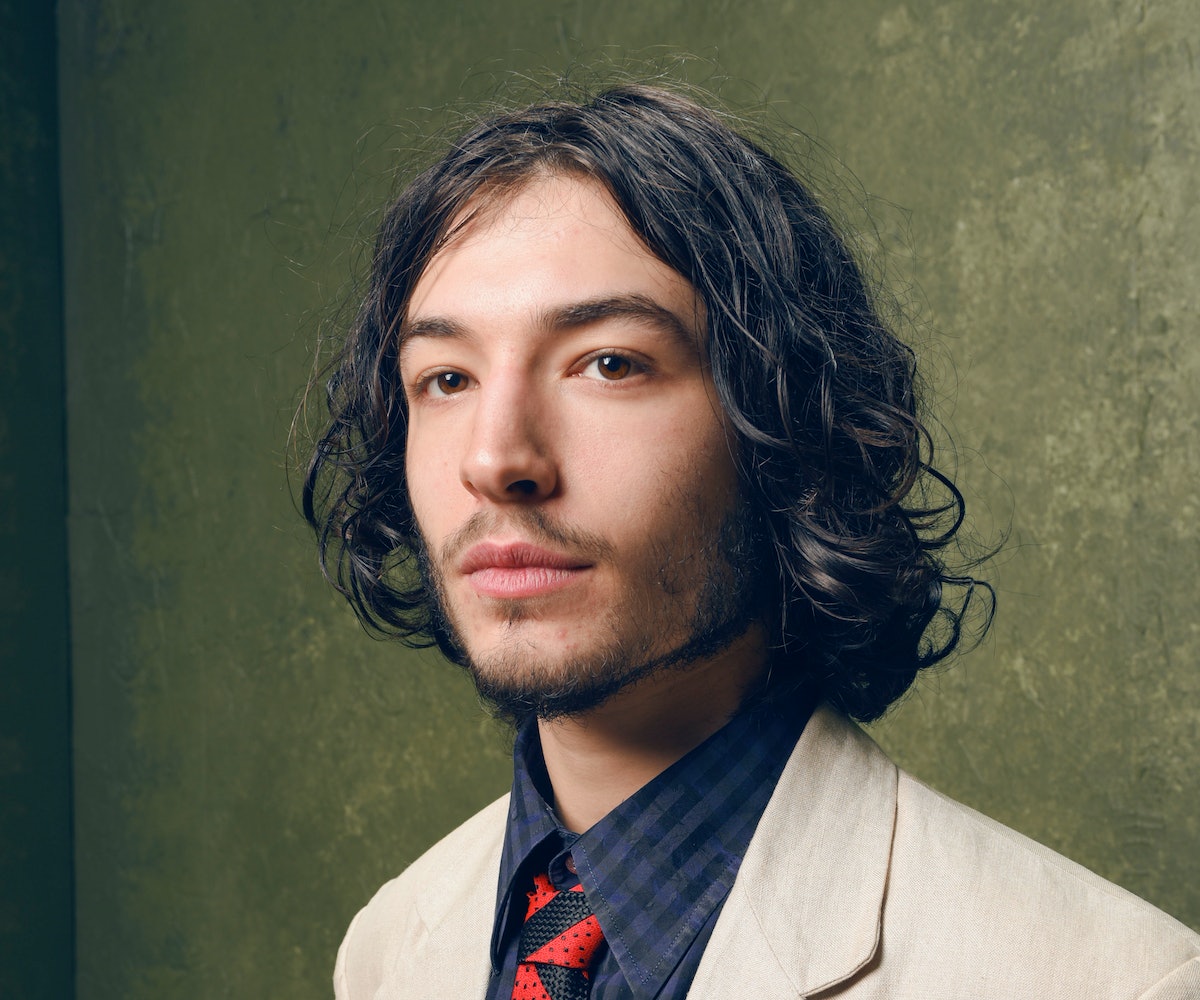 The Stanford Prison Experiment tells the disturbing real-life tale of Dr. Philip Zimbardo and his notorious 1971 study that recruited a group of young men to simulate prisoner-guard dynamics in a mock prison over a two-week span. What occurs next is chillingly recreated by director Kyle Patrick Alvarez and a group of some of Hollywood's brightest young actors, including Ezra Miller and Michael Angarano, who play opposite sides of the same coin in the disturbing thriller. Angarano's character takes his guard role to a ferocious extreme, adopting a Southern accent and a sadistic streak, while Miller's prisoner, known in the film simply as 8612, initially tries to lead a rebellion before mentally coming apart. Both actors turn in standout performances among a group of peers that includes rising stars like Thomas Mann, Tye Sheridan, and Nicholas Braun.

We sat down with the two actors earlier this week and found them in a candid mood. Besides talking about the demands of recreating the nightmarish experiment, Miller and Angarano detailed what it was like acting alongside the same actors they've been auditioning against for years, spoke about their thoughts on—and in Miller's case experience with—incarceration, and what they might choose for their last meal if they suddenly found themselves on Death Row. (The conversation was more lighthearted than it sounds.)

Ezra, you do a lot of screaming in this movie. Did it kill your vocal chords?E: Several times, yes. It also really hurts my head. When you yell a lot, you get that specific headache where your brain is like, “Stop, man.”

M: I just did a play workshop where I was screaming, and after the first day of rehearsal I was like, I gotta change something. I gotta do some serious breathing exercises, because that messes you up.

Did you listen to recordings and watch footage of the real Stanford Prison Experiment as a reference point?E: Yeah, certain reference points felt good to have. We weren’t basing these performances on frame-by-frame studies of these people. Kyle encouraged us to take license in creating these characters, but certain moments are just too good. You couldn’t possibly make it up. The scene that Michael and I do at the end of the film, we did that from looking at the video because it was so good. The actual conversation that happened on video is so wild that you can’t even believe it.

I was mesmerized by that scene. I was so hoping that your characters would meet again after the experiment, and I was glad they did.E: It’s important to know that that’s actually one of the liberties that was taken in the making of this movie, in the terms of straying from actual events. That was not my character that did that interview with Michael’s character. It was actually Thomas Mann’s character.

M: How emotionally affected he was, and how unemotionally affected my character was to me, the greatest frame of reference for my character, because it gives you a huge insight as to what he was really thinking about, what instigated this other character to come out of him. He was like, “It wasn’t me. I wasn’t doing anything. I just wanted to have some fun and earn that money.”

Neither of your characters are given any backstory. Is that something you usually rely on to flesh out a role, and was this a challenge?M: I think it depends greatly on what kind of role you’re playing and what the script is asking for, but what I think is so powerful about this—is that you don’t know who these guys are, where they came from, if they’re actually good, decent people. I think it’s an important thing to know—that all or any notes of individuality or character development that had built these guys up to who they were before they came into the experiment was completely stripped.

E: And what we were wearing was pretty darn close to exactly what they wore.

M: Yeah. Kyle did give us a lot of liberties, but a lot of scenes we didn’t want to stray too far from the material because they’re important beats that we have to get. But those lineups would sometimes go on for like 15 minutes. Remember those days when we would just be in these lineups and not go outside?

M: They would call cut and be like, “What world did we just leave?”

E: And that’s something that was really cool about how well we were able to maintain the pleasant, really fun working environment, because we really were able to feel the contrast between “cut” and “action.”

You both worked with about 20 other young actors who are your peers but also your competition. What was that like? Were you initially cautious about it?E: For sure, because the hyperbole of saying society right now at large encourages us to be competitive with one another. As young actors of the same age range, there’s an encouragement for us to compete where we’re trying to win out the role.

M: The cast of TheStanford Prison Experiment is essentially all of the guys who auditioned for Spider-Man and didn’t get it.

E: All of the Spider-Man rejects, cursing Andrew Garfield’s name to the skies, but together. But no, I would say it was really, really refreshing and empowering and amazing to work with and collaborate with this group of people who you’ve been told are your competition, but you know are your comrades. We’re all in this thing, we’re doing this crazy thing together and it should be together. I’ll also say that I’ve had a lot of terrible experiences over the course of my life with large groups of men. It’s been like a lot of the worst experiences of my life. And this was really transformative and healing for me, in a very serious way.

Really?E: One-hundred percent. And for the first two weeks, I was waiting for the axe to fall, you know what I mean?

Was there any sort of trepidation when it first started, wondering who your allies and your enemies were?E: One-hundred percent. I’m flashing back to very, very rough times and I’m like, “When are they gonna turn?”

M: “When are the switch blades gonna come out?”

E: Because I was traumatized as a middle schooler in the 1950s.

M: When are we gonna go fight under the bridge?

E: Yeah, like when are we gonna meet under the bridge? Comb my hair back son, roll up my sleeves, and have a nice rumble.

M: Everybody was very aware that it could have easily segwayed into a life-imitating-art situation. It was one of Kyle’s main concerns walking into it. We all had meetings and we were all trying to impress upon him that we were all going to take it very seriously..

Was there an extra amount of goofing around because (A.) you’re all sort of the same age and (B.) to alleviate the heavy tone?E: Massively. It was really important that we say inappropriate, horrible things that will never be repeated off of the set of Stanford Prison Experiment in those interment periods so that we could shake it loose.

M: It kind of became like we receded for 10 years and became the middle-school versions of ourselves.

E: Yeah, but again, for me the redeemed middle-school versions of ourselves where we weren’t turning on each other.

Did you guys talk about parts that you didn’t get and the other person did?M: Literally. I’m not exaggerating.

Did you find that to be hellish?E: Yeah, and I’ve really had the experience of noticing how few of my capacities are substantial, how when you’re in this place like The Tombs—and like Zimbardo said to his guards before the experiment—it’s simply a situation where we have all the power and they have no power. And to really feel how much of the entity I consider to be me is actually reliant on very flimsy and transient external conditions, was a really challenging and important series of experiences in my life that first of all, made me really not want to get arrested anymore, and second of all, made me really want to cultivate spirit, really want to cultivate my understanding of my innate self and build up that guy because this guy is going down when shit hits the fan—no question. He’s falling apart and so there better be the truer, internal warrior spirit that we can pull out during those times.

So you’re saying if you were in solitary confinement, you would want to be able to keep your shit together?E: I would want to know how to meditate for 14 hours, at least.

Michael, how do you think you’d handle being locked alone in a room for a day or two or three?M: I mean, we’re learning more and more about what solitary confinement does to the human mind, and I think it’s one of the most dangerous weapons that we, as humans, have.

M: To isolate each other because I think your mind just disintegrates rapidly. I think I’m completely speaking out of place and with a great deal of baseline ignorance, but I have no idea how I would react. I would think that my mind would slowly disintegrate like everybody else’s, but I would also hope that I could find some level of peace within it. There are amazing stories of people who have endured years of that. I don’t think at this moment in time I’m physically capable of really withstanding it, but I don’t think a lot of people are.

Ezra, what did you learn from your experiences in jail?E: I definitely felt like I entered the courtroom and suddenly, things separated me from the people I had just been incarcerated with. I definitely felt that if I was a person of color, according to my crimes, I might have been sent to Rikers for a stretch, and I can tell you with great assurance that that would have crushed and ruined me. Consider the horror of incarceration and really what it’s doing to people, as we claim it’s for the purpose of rehabilitation. Beautiful kids who go into Rikers Island come out as killers. This is our society’s means of reforming people? That’s rugged.

If you guys were both on Death Row, what would your final meal be?E: I’ve thought about this a lot. There’s a great George Carlin routine where he’s prolonging his death by being indecisive about the meal. Honestly, I think it would be ramen. I’ve thought about it a lot and I think a nice bowl of ramen, because then you’d also be weighed down and taken out of the game a little, so you’d be a little food coma-ed for the horrible, lethal injection that is probably terribly painful, speaking of cruel and unusual punishment. I’d want to have a little ramen downer on me.

You want to knock yourself out a little bit.E: Also how is the mercury going to interact with those chemicals, you know what I mean? You gotta think about it. It’s very dangerous.

M: Mom’s home-cooked meal is probably what I would do.

E: My mom is making me some ramen, you hear this mom?