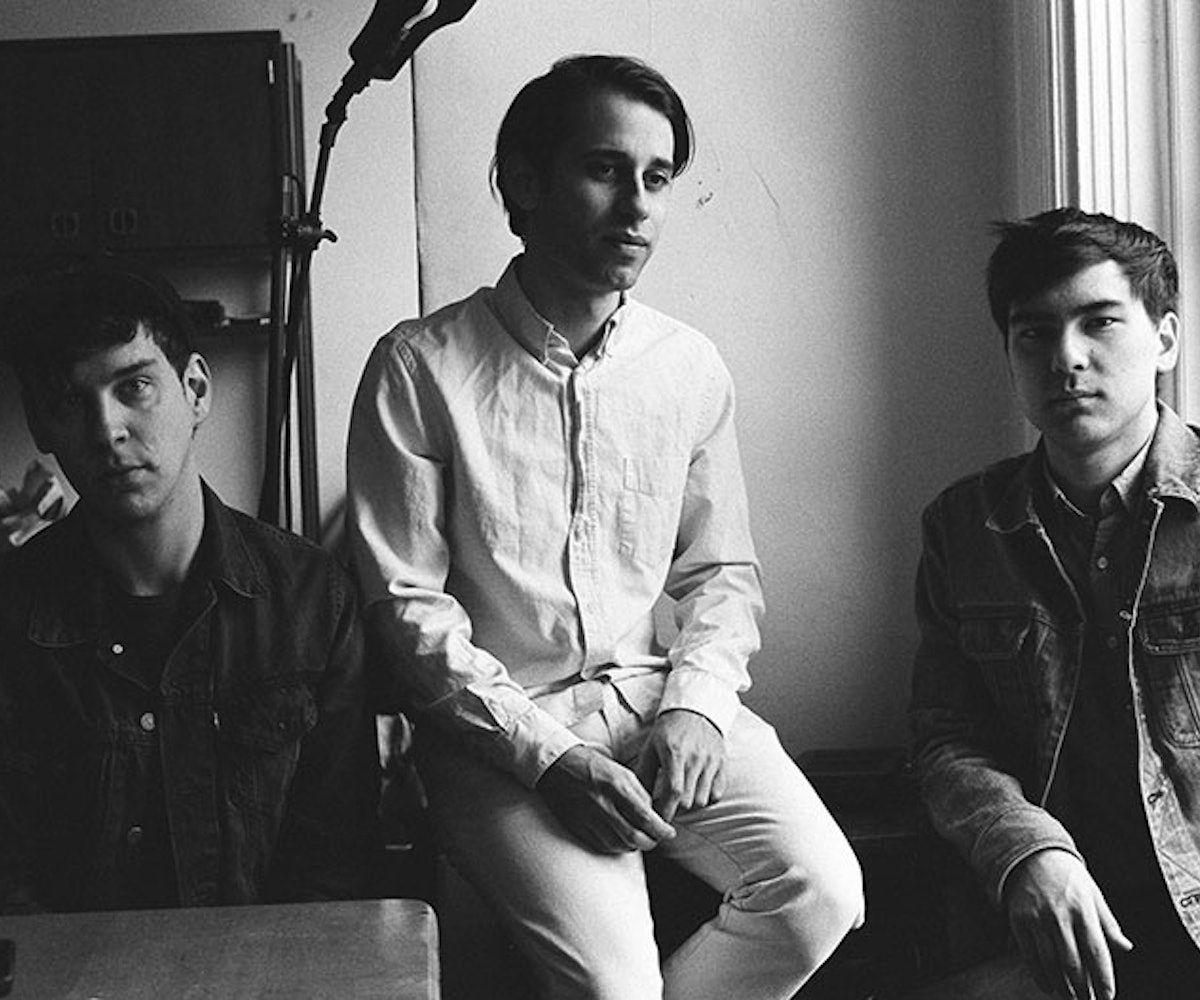 Just because you’re a band from New York City, it doesn’t necessarily mean your band sounds like New York. The city’s sound seems to fluctuate with the traffic tides. There’s the Brooklyn-indie vibe, the grit of the Lower East Side’s heyday, and deep club beats. Brooklyn trio EZTV has found a sweet spot right in the middle. Together, Ezra Tenenbaum, Michael Stasiak, and Shane O'Connell create a music that’s rich with summer ease and introspection. Their debut album, Calling Out, is a refreshing take on the heartbreak trope that spins even the lowest points of a breakup into something you can kick back to.

Here, the trio’s resident songwriter Ezra Tenenbaum lets us in on what went down and where New York is, sonically.

Congrats on the album! There seems to be an element, as joyous and euphoric as the tracks feel, there’s a very bittersweet element to the whole album...something like heartbreak.

It’s kind of a breakup album, really. I wrote it when I had a relationship ending—they had moved out. My way of dealing with it was to try to write positive songs and power-pop songs; so it’s kind of a mix of trying to have fun and trying to move on.

Definitely. I love that you can listen to it and feel good, but also know that there is some real solid emotion underneath. Anyway, how did EZTV come about? How did you all meet?

All three of us had played in bands and were living in New York for a bit. Michael [Stasiak], the drummer, and Shane [O'Connell], the bassist, met at NYU. Michael was working at a record store over there and [they met] through his boss. His band was dumped at the last minute before playing, like, Lollapalooza, and needed a band to get together. It was just kind of on a whim—the two of them are friends and they asked me to just crack up a bunch of songs. [The show] didn’t end up working out, but I had a bunch of songs I’d been working on anyway, so I’d asked them to do some stuff with what I had been working on. Here we are!

What kind of music were you making on your own? Was it always this kind of poppy, rock n' roll vibe?

I was listening to psychedelic rock like Ariel Pink, Chris Cohen, and some of that stuff. It took a while and we were all busy doing other stuff. It was really a side project for a while until last year, when we actually started playing shows and made a record.

How would you describe the vibe of EZTV?

It’s definitely influenced by ‘70s power-pop like Nick Lowe and the British Invasion. It’s also really built around us, as a trio—we’re trying to get the most out of the lean-trio vibe. When we actually started making the record, I was listening to a lot of Big Star and Radio City’s music. I got into the idea of loose-trio rock music.

Honestly, EZTV is a breath of fresh air among all these cookie-cutter songs coming out today.

I think, unintentionally, we keep our recording methods pretty basic—we mostly record things live. Once we get something down, that’s it.

What would you say has been the most surprising thing since becoming a band and putting the album out?

It’s really interesting to see people latch onto it or latch onto different elements of it. They have this label called Tugboat Records in Japan, and they put out the record separately. It’s been interesting, you know, I have no idea what Japanese culture is like, but I guess there’s like a small group of people that are really into Anglophilic power-pop. It’s been surprising that people are listening to it and pass it around.

How long have you been in New York?

I’ve been here—I think we’ve all been here eight or nine years. We all moved here for school and have been here ever since.

So you’ve seen all of the scenes fluctuate throughout the years.

Definitely. I think that plays a part in our music; having been here and seeing all the musical trends come and go. I feel like, at this point, we just want to be in a fun band and not overthink it or try to be one of the latest cool trends. We’re just making music we like.

When you think of New York, what is its sound? I always think the Yeah Yeah Yeahs have a really New York sound.

I don’t know! There is a whole early 2000s Yeah Yeah Yeahs-Strokes vibe, but there’s also Brooklyn. When I moved here as a freshman in 2006, there was Animal Collective and Dirty Projectors. It’s really hard to pin down what a New York sound sounds like. I think that’s what’s great about New York. You can bounce around.

What is the best advice you’ve been given?

Make music or make art that you stand behind and that you and your friends would listen to. I don’t think it gets more complicated than that. It ruins the point if you start thinking beyond that. I don’t know if that’s advice per se, but it’s something that, over time, has become a guiding principle. If you really believe in what you’re doing, I think that’s the most important thing.