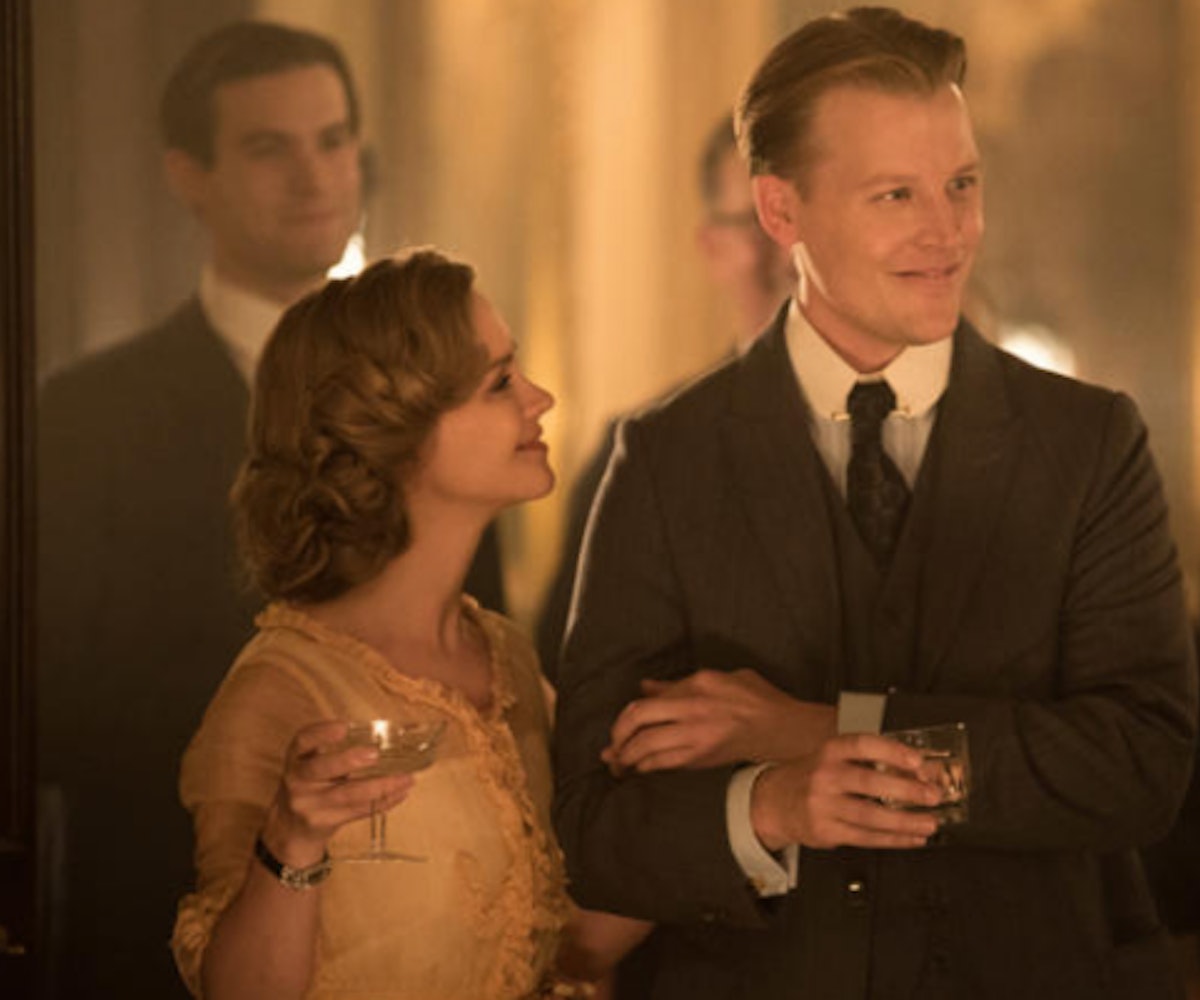 The new Amazon Prime series Z: The Beginning of Everything focuses on the life of Zelda Sayre (portrayed by Christina Ricci, who also produced the show), a wild child Southern belle, whose artistic talents were manifold, but who is perhaps best known historically as the wife of iconic American author, F. Scott Fitzgerald. The first season of the series follows the early days of the couple's romance, the literal honeymoon period. It's fascinating not only for its gorgeous era-specific costumes and sets but for the way in which it casts an intimate eye on a love story of mythic proportions.

Key to this is the sensitive portrayal of F. Scott Fitzgerald by David Hoflin. At the beginning of the first season, Fitzgerald had yet to publish The Great Gatsby; in fact, he had yet to publish any novel at all. So while audiences are aware of Fitzgerald's looming fame—and the couple's inevitable notoriety—the characters themselves are still uncertain about the ultimate path of their own lives. It's a fine balance to strike, that of an artist who wants great things for himself, but has no assurance that they will arrive, and Hoflin pulls it off beautifully.

Recently, we had the chance to sit down with Hoflin and talk with him about what it was like to play such a legendary figure, what attracted him to this project, and whether or not artists should enter into romantic relationships with one another.

What first attracted you to this project?

Well, the story really; the romantic story of Zelda and F. Scott is really the basis of the whole show. The fact that Christina was involved, I didn't know a great deal about the history of Zelda and F. Scott beforehand. I knew of F. Scott, but I didn't know of their history. The fact that it's set in New York in the Jazz Age was appealing. And the fact that it was going to be shot in New York as well; it wasn't just a studio somewhere outside. We ended up shooting in a lot of places that were private clubs that have been around since the 1800s, so you really got a feel for the history. And the sets that we did have were pretty amazing and, hopefully, it catches that life.

F. Scott Fitzgerald is one of the most important American authors of the last 100-plus years. But what's so interesting about his story is, even if you take his celebrity out of it, he and Zelda just have an incredible love story, period.

That was the key in my opinion; that's the key to the whole show, really. If we can establish a strong connection between Zelda and F. Scott, then that's half the battle won, because then hopefully people will care about what happens to them. They did have a very tumultuous relationship, very high highs, very low lows, so I think—especially for the first season—the important thing was to really establish a strong base of the way they passionately felt about each other. Because then, you know, people hopefully will care to see what happens to them. And, you know, it just keeps on getting more extreme as time goes on.

Yeah, absolutely. They meet in this sort of inherently cinematic way: He's in the army, and he sees her dancing. It's so incredible because if all of it was just written you almost wouldn't believe it to be true.

Right, and it is kind of amazing how it all comes about. I haven't delved too much into the later parts of [their lives] because that's for later on, but, of course, I'm aware of sort of what happens in their relationship. There's a lot of stuff there, and you wouldn't necessarily believe it was true unless it was. That's why this is a very interesting story, I think, because there's so much that happens. Their lives were so colorful at a time where it was already a very interesting, original time period of history to live.

So how did you prepare for this role?

I did as much reading as I could in a relatively short space of time. I read a lot of his early books to get a sense of who he was. You know, there's a lot of opinions on what F. Scott was like on a personal level. I tried to steer away from that as much as I could because they're just opinions. He was very eloquent in his writing, and a lot of the time he wrote about himself; his characters were him or a manifestation of him and his personality, so generally I studied a lot of his earlier writing to get an idea of what he thought of himself. That was the main thing. Apart from that, it was a simple love story, really. The challenge that Christina and I had was trying to get that established; I mean it wasn't a challenge, but that's what we really wanted to do, try and have that connection between boy and girl. So that was important.

You're dealing with such an epic time in history and these larger than life characters, but there's an intimacy to it on-screen that is really special and makes it feel like you're not just watching mythical people. You're just watching people.

I think that's an important part of it, 'cause after a while, it's like anything; if you watch an action film, after a while the explosions, the visuals, they're not going to carry the whole film. You're going to get bored of that at some point, and you need a strong story and strong characters to drive the story along with it. So hopefully, as much as the show looks good and really represents a time period, if we can get across just a simple story of two people no matter what era, I think that's important too.

How is it playing somebody who actually existed? Is there a weird responsibility that comes with that?

It was interesting. I don't think a lot of people would look at any performance of anyone playing F. Scott and say, "That's not him; those weren't his mannerisms." It was a time before there was a lot of video footage of him, so really, interpretation-wise, there wasn't a lot of responsibility to get the way he walked right. That's up to interpretation. But he is an iconic figure and, of course, you want to do the character justice, but it's more for me about trying to understand his inner psyche, and how he viewed himself, how he viewed life, and, more importantly, how he viewed Zelda, 'cause she was such an inspiration to him—she was the main catalyst of his success.

She was a muse, but she was also an artist in her own right, though obviously not as celebrated. Their relationship and its inherent imbalances proved really difficult. Do you think that says anything about two artists being together?

At the end of the day, I think, it's just purely based on personality. Artists are generally more well-known for being a little bit extreme, maybe. But I think that can work. The problem that they faced with each other, I think, would be the fact that, along with being great artists, sometimes come addictive personalities; or the reason why they're great artists because they have something that they need to release. I believe that's quite strong in a lot of people that are artists. And, generally, when that plays into two artists who are very passionate, you have the high highs and the lows and the depressions and the addictive things with alcohol and drugs, and, certainly, that played a part—a big part—in their relationship. I think it's, though, a personality mix. You know, I think you can find people in the world that are artists that get along famously because they mix so well. I think with Zelda and Scott there was this honeymoon period where everything is going well for the most part, and then it slowly unravels.

[Laughs] Well, I mean, you know it is history, but I won't give anything too extreme away.