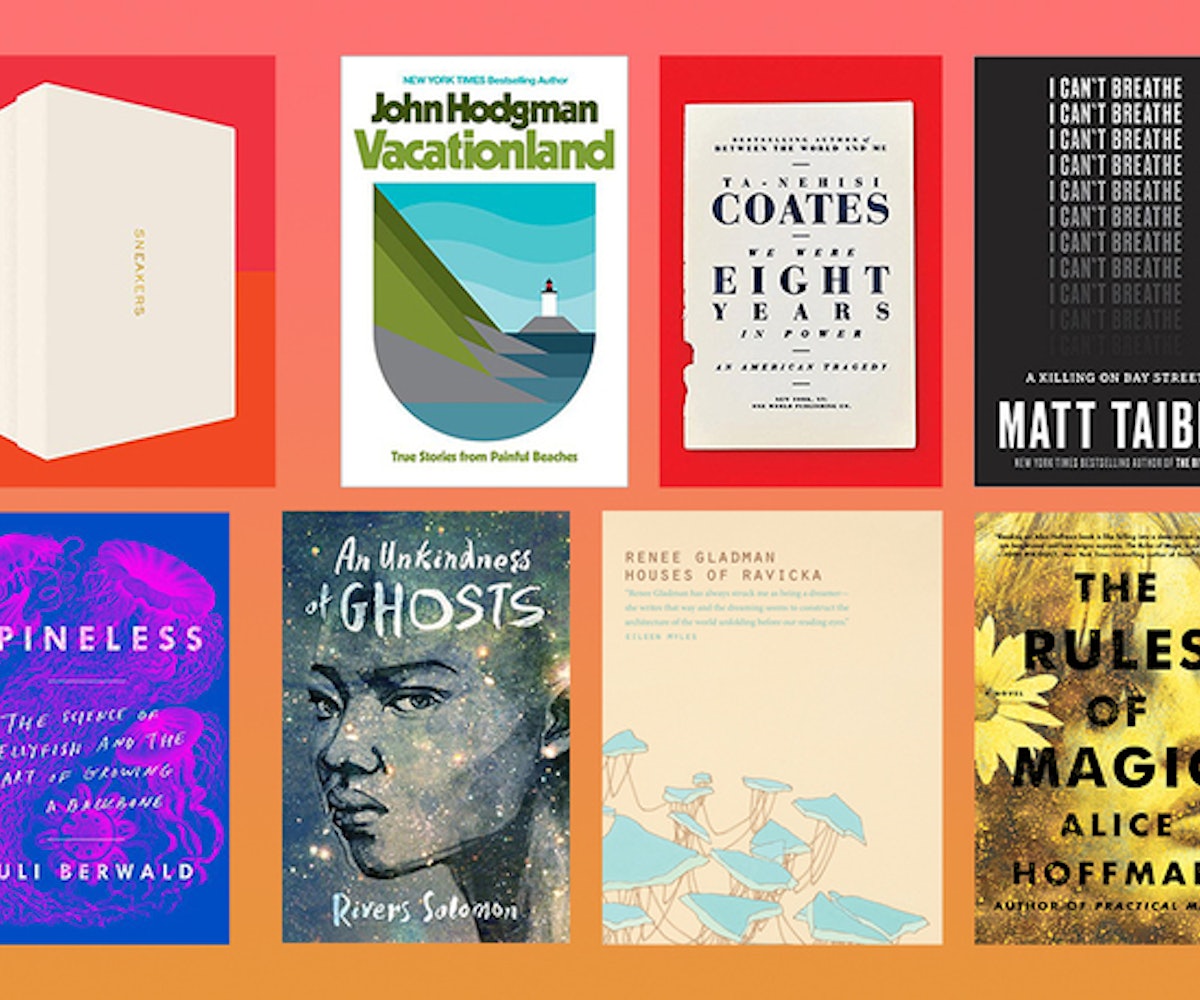 Summer's known for its great beach reads, but fall might be an even better time for books. After all, there's something inherently satisfying about cozying up with a good read when the weather drops.

To help spread that special feeling around, we've enlisted the help of bookstore employees in the New York area to get some recommendations. Because who better to share their favorite books (aside from us, of course) than the people surrounded by them?

All of the following titles will be released in the coming months, so add them to your list. And don't forget, there's plenty of August reading material to keep you occupied in the meantime.

"Rodrigo is my all-time favorite designer, and he's made a book about the history of sneakers. Sign me up!"—Michael Fusco-Straub, owner of Books Are Magic.

"John Hodgman is one of the most consistently hilarious people I have ever seen, so I'm pumped for his book, Vacationland, coming out in October."—Michael Chin, events coordinator at Books Are Magic.

"This is a new collection of essays from Coates set during the Obama years. The title is in reference to Thomas Miller, a black congressman elected during reconstruction. It's very timely."—Kathryn Harper, sales associate at Housing Works.

I Can't Breathe: A Killing on Bay Street, by Matt Taibbi (available October 24)

"Literary journalist and Rolling Stone must-read Matt Taibbi dives deeply into the infamous police killing of Eric Garner. While this is definitely not the feel-good book of the fall, it is wildly important, informative, and, at times, infuriating. A serious breakdown of the corruption in our justice system."—Leigh Altshuler, communications director at Strand Bookstore.

"I'm so excited to dive into NORMA by Sofi Oksanen. It's the story of a young woman with supernatural hair, who is trying to solve the mystery of her mother's death. I mean, you really can't get any cooler than supernatural hair."—Melissa Ragsdale, events assistant at Housing Works.

From Here to Eternity by Caitlin Dougherty (available October 3)

"[Dougherty] traveled all around the world to observe death rituals and practices for this book. It sounds morbid, but her voice is so funny, personable, and empathetic that it won't bum you out too much."—Harper.

"I picked this up because I love books that explore how weird and wonderful the natural world is. Spineless looks at how jellyfish, who are able to sense and feel and react without any nervous system(!), may be a key to surviving rapidly changing and destroyed ecosystems."—Colleen Callery, marketing coordinator at Books Are Magic.

An Unkindness of Ghosts by Rivers Solomon (available October 3)

"I'm hyped for Rivers Solomon's sci-fi novel An Unkindness of Ghosts. It's about slavery, racial segregation, and resistance, all set in outer space."—Liv Stratman, bookseller at Books Are Magic.

"This is Okeowo's debut book that looks at four stories of men and women fighting extremism and fundamentalism across Africa. We're also hosting her book launch on October 4!"—Callery.

"This is a short story collection that sounds wild in the best way. The author reimagines Law & Order SVU, what more could you want?!"—Harper.

"Zoe Quinn speaks up against the internet, and the hate and danger lingering in its corners, in Crash Override. Quinn exposes online harassment through her own experiences with GamerGate and also provides tools to help those at the receiving end of it. Why are we excited? The internet is overdue for a wake-up call against cyber-bullying, and this is what we've been waiting for. We're thrilled to be hosting her at the Strand on September 5."— Altshuler.

"Renee Gladman is the supreme prose architect of our time.The latest installment of the Ravicka cycle brings readers even further into the ailing urban sprawl of Gladman's speculative tour de force. There's nothing else like Ravicka in contemporary fiction, and any opportunity to encounter its mysteries is a welcome one."—Jarrod Annis, manager at Greenlight Bookstore.

"The debut collection from Emily Skillings radiates like mercury and feels, in its way, inevitable. Her poems move like a body in flux, and before you know it, you've turned into something different after reading them. You don't read these poems so much as they soak slowly into your skin."—Annis.

"If you loved Salvage the Bones, get excited for this book. The story of a struggling Mississippi family is beautifully and compassionately told by Ward in this novel. Get ready for personal—and sometimes tear-jerking—moments with character Leonie and her children, Jojo and Kayla. You don't want to miss this one!"—Altshuler.

The Rules of Magic by Alice Hoffman (available October 10)

"This prequel to Hoffman's best-selling Practical Magic is about an earlier generation of the Owens family, three magically gifted siblings who are learning who they are and, at the same time, dealing with the curse following the family since the 17th century: those they fall in love with come to ruin." —Tom Morris, sales associate at Housing Works.

NEXT UP
Culture
December 2022’s Best New Books
Culture
Not One, But Two BTS Documentaries Are Coming
Fashion
Reformation & Canada Goose Team Up To Warm You Up
Fashion
Jimmy Choo’s Collab With Timberland Gives The Classic Boot A Glam Makeover