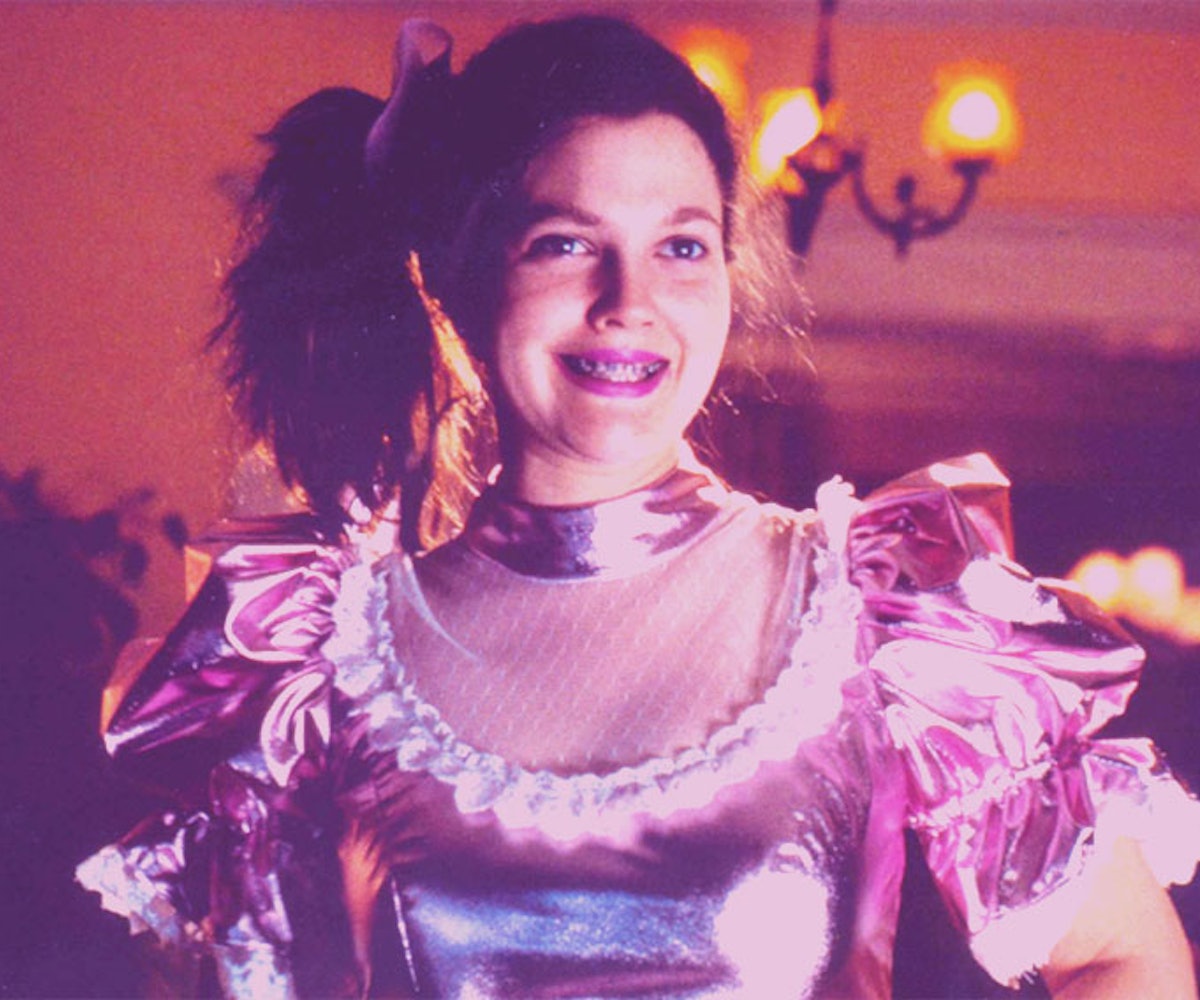 Sometimes, I think to myself, maybe prom wasn't so bad. But then I unearth the photos of me looking like some sort of cyber warrior-slut with square fake nails, and my generous feelings towards the hallowed American ritual fade. I looked crazy. Yet, my photos also tell a story about who I was in '99 (a weirdo), and I wonder—will girls today, with their access to red carpet looks and the Internet, be subjected to incredibly dated prom portraits? And, also, is it possible to find a prom dress that doesn't immediately feel cliché? We tasked our editors to share why they wore what they wore, and what they might don today. Strangely, it isn't as bad as you'd expect. But, it isn't that great, either.

"Here is what you can't see: The barbell that has been shoved through my very thin eyebrows, and the fact that my dress is missing an entire back. (I had breasts then, so I am pretty sure I had taped them with these weird, boob-sized Band-Aids.) My whole look was very inexpensive—I got the skirt for about $40 from Wet Seal, and I think that my shirt may have been from Delia*s. I wanted to have a sense of edge, but I always like playing with opposites—a naked back + a full-sized skirt. My date (my pal Robbie) was good-natured about having a giant raver on his arm that night. If I did it again, I would rent the hell out of my dress, because I never ever wore this ensemble afterwards."

Jay Godfrey Back Out Gown, $70, Rent The Runway.

"So, my dress was actually vintage from the '60s! I went to a small vintage store and found it for $50 dollars, chopped off the long skirt and I was done! I think it's still a great dress, it's so beautiful, and it still fits (thankfully) so sometimes I wear it when I have a special occasion! I'm one of the lucky ones." —Marissa Smith, Fashion Market Editor.

"In high school, I was a crazy rocker chick, and mostly wore oversized concert T's, baggy Levi's I stole from my brother, and Dr. Martens. So I wanted to have my Cinderella moment at prom. I went classic with a long black and white gown with a huge white bow on the back, and long white gloves. Those gloves! What was I thinking? It was my 17-year-old self's idea of being sophisticated. I don't know if it's just nostalgia talking, but I do still like this dress (minus the gloves and tendril updo). But if I had a prom re-do, I would want to go with a younger look that's more fun and modern, but still classic." —Patty Adams-Martinez, Editor-At-Large.

"Several weeks before prom, I broke up with my boyfriend, and by then all my friends already had dates...So I decided to go alone. I also decided it would be a really good idea to wear the silliest, pinkest, shiniest, longest dress I could find, because I felt like if I was going alone I should do it in something ridiculous. I wasn't trying to make a fashion statement, more like an 'I'm a pretty princess with or without a date' statement. In hindsight, this was not a good move. If I had to do it again, I'd want to wear a really fabulous jumpsuit—one that I'd actually wear again, too." —Gabrielle Korn, Senior Digital Editor.

"My prom was only five years ago, so I wouldn't say my dress has aged too much. If anything, I would have changed everything but the dress. I would have worn less makeup and forgone the tight, complex updo. It sounds cliché (much like prom itself), but you always feel best when you're not trying to emulate someone else's ideal of beauty. But if I had to change the dress, I'd definitely dress like the Bratz prom dolls, with a crop top and voluminous high-waisted full skirt—because why not?" —Yasmeen Gharnit, Editorial Assistant.

"I remember liking this dress for several reasons. I thought the color was really pretty, it fit perfectly and it seemed more sophisticated than the puffy tulle princess dresses everyone was going for that year. I also had boobs for the first time ever (thanks birth control!) and was super excited to share them with my high school. Considering my prom was 11 years ago, I think this dress holds up pretty well. It looks kind of irridescent because of the flash in this photo but it's less shiny and more silky in real life. I would even consider wearing it to a wedding.

(A note about this photo: My bff and I had gone to prom together since both our boyfriends were too punk rock to be our dates and we left early to go meet up with them. This was before cell phones —so we stopped at this payphone in the middle of nowhere to call them only to find that they had decided to stay home and play video games.)" —Liz Riccardi, Digital Design Director

"After multiple trips to almost all the malls around Cleveland, OH, I had picked this black elastic/tulle dress. It's hard to see in the picture but it's piece-y at the end of the skirt, so there is a nice movement to it. I still like the dress but kind of wish I didn't choose the color black. This is a mom thing to say, but hear me out: you're gonna get so many opportunities to wear black for the rest of your life. I was also the only girl who didn't wear heels or get her hair done to our prom, and although I'm proud of that to this day, I also maybe wish I did both in moderation." —Busra Erkara, Senior Editor.