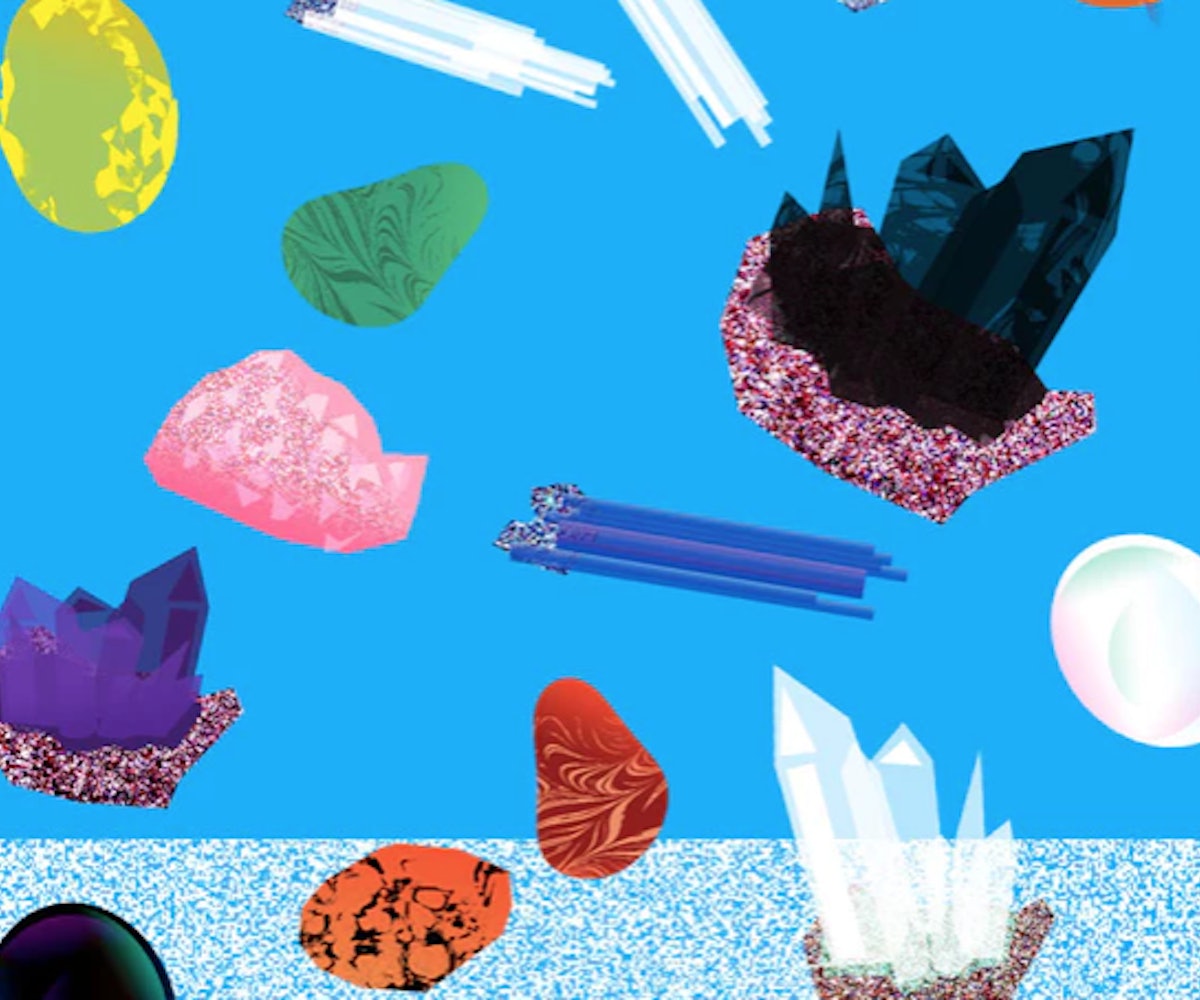 It would be easy to write off 2017 as a year devoid of beautiful things. These past 12 months have, after all, been filled with much that was ugly; that is a list that I could recite, but, in the interest of celebrating beauty here, I... will not. Instead, the following is a collection of sentences that signify something important: In the midst of all this ugliness, fragments of loveliness do exist. And because of their small size, the sharpness with which they were crafted, it is these sentences that have stuck with me over the course of the year, burrowed under my skin, where they've sat for some time, distinct from the larger whole but irrefutably part of it, proof that words have some power still, and that their power can be used for good, whatever that means.

Here, then, is the year in our sentences. Some of them are more intricate than others; some are fiction, some are not; some are more impactful than traditionally beautiful. All of them have teeth. All are hungry and nourishing at once.

Morgan Parker, from "Poem on Beyoncé's Birthday," There Are More Beautiful Things than Beyoncé: "Drinking cough syrup from a glass shaped/ like your body I wish was mine but as dark/ as something in my mind telling me/ I'm not woman enough for these days/ colored with reddish loathing/ which feels, to me, more significant than sun/ my existence keeps going/ ripple in other people's mouth/ pools of privilege and worship/ I want, I keep thinking/ I am exclusively post-everything/ animals licking my chin, new leaves stretching/ from a palm plant like a man's greedy arms/ today your open eyes are two fresh buds/ anything could be waiting."

Why we love it: Parker's poetry drip drops its way into your consciousness, lingering long after your eyes have moved on. This poem is one long sinuous sentence, but it evokes desire, need, envy, and is profoundly rooted in both the body and the mind, playfully exploring the boundaries of both.

Sarah Manguso, from 300 Arguments: Essays: "The trouble with comparing yourself to others is that there are too many others."

Why we love it: Manguso excels at the type of taut sentences that pierce right through you. They feel as familiar as memories, but take your thoughts to wholly new territory. This sentence, in particular, speaks to the futility of searching for meaning in essentially meaningless ways.

Durga Chew-Bose, from "Heart Museum," Too Much and Not the Mood: Essays: "A woman carries her inner life—lugs it around or holds it in fumes that both poison and bless her—while nourishing another's inner life, many others actually, while never revealing too much madness, or, possibly, never revealing where she stores it: her island of lost mind."

Why we love it: It was really too hard to pick one beautiful sentence from this specific essay, let alone from Chew-Bose's entire book, but I love this one, for the way in which it so perfectly captures a woman's burden as she moves through the world, and what it takes not just to maintain sanity, but, actually, to maintain, too, a level of insanity.

Samantha Hunt, from "A Love Story," The New Yorker: "I had great hopes that the threat of Lyme disease would revitalize our sex life."

Why we love it: Hunt's absurdist humor is just the right level of dark (i.e. very), and I love a touch of morbidity attached to my sex life, don't you?

Jesmyn Ward, from Sing, Unburied, Sing: "'Jojo,' she called, and her voice was a fishing line thrown so weakly the wind catches it. But still, the lead weight settled in my chest."

Why we love it: Okay, yes, technically this is two sentences, and it was also hard to pick just one small part from Ward's brilliant novel, but I love the imagery here; I love how I can hear that voice, even in its fading.

Julie Buntin, from Marlena: "Tell me what you can't forget, and I'll tell you who you are."

Why we love it: This is one of the strongest opening sentences of any novel I read this year, and that it's Buntin's debut novel is all the more impressive. As with all great writing, I feel like it's existed forever, awaiting my discovery. And now that I've found it, I'll think about it always.

Jen Gann, "The Son I Adore Is the Son I Shouldn't Have Had," New York: "And it’s something almost beyond me to imagine, looking into Dudley’s eyes and saying, I’m sorry I didn’t save you, from your own life."

Why we love it: Gann's essential piece about her experience raising her son, who was found to have cystic fibrosis after he was born, is one of the most powerful things I've ever read. She details the excruciating pain of being a mother, and being unable to do the one thing you most want for your child: save them from pain. In Gann's case, saving her son, Dudley, would have meant not letting him be born. This is a perfect, heartbreaking meditation on love and choice, and should be read by everyone.

Carmen Maria Machado, "The Husband Stitch," Her Body and Other Parties: "She’s like dough, how the give of it beneath kneading hands disguises its sturdiness, its potential."

Why we love it: Machado does a remarkable job at focusing on the dichotomies inherent to women's bodies, how they are seen and experienced, felt and lived. We are all just doughy bags of fluid-filled flesh, and Machado reveals and revels in that, but also manages to make us so much more.

Sarah Nicole Prickett, "Weirder Things," ArtForum: "There is an old word for women who believe they can overturn fate, and the word, as an adjective, is 'weird.'"

Why we love it: Really all of Prickett's writing about Twin Peaks is required reading for anyone interested in all things... weird. Which Twin Peaks is, and Lynch is, and women—some women—are. It's simply some of the best criticism written this year, and is perfect for anyone who recoils at the word "recap."

Rebecca Traister, "Our National Narratives Are Still Being Shaped by Lecherous, Powerful Men," New York: "In hearing these individual tales, we’re not only learning about individual trespasses but for the first time getting a view of the matrix in which we’ve all been living: We see that the men who have had the power to abuse women’s bodies and psyches throughout their careers are in many cases also the ones in charge of our political and cultural stories."

Why we love it: Maybe (definitely) "beautiful" is the wrong descriptor here, but, whatever, because maybe beauty can be ugly, and the truth is often both. Traister tells the truth—a truth—in this piece, and it will make you question everything you thought about how our collective stories are told.

Jenny Zhang, from "Why Were They Throwing Bricks?" Sour Heart: Stories: "Oh well, it was probably stupid anyway, and you go on with your life, and you learn nothing, and you don't change at all."

Why we love it: Some of the absolute finest writing this year about family was done by Zhang in her excellent short story collection, Sour Heart. This sentence ends one of my favorite stories in the book and is a reminder that our history makes us who we are, but also doesn't, but also that's okay. In other words, it reminds us of the gorgeous emptiness of love, and how we need it to make sense of our lives, even though it, on its own, makes no sense at all.

Sadie Stein, from "Goodbye to the Gem Room," The Paris Review Daily: "New York was more of a nerd’s town back then, or at least felt like it: cheaper and weirder and crummier."

Why we love it: This tiny piece is a gem of its own, commemorating, as it does, one of the last remaining havens for nerds in New York. It's gone now, but this tribute remains, glimmering softly, there to be turned over and over in your mind.

Dayna Tortorici, "In the Maze," n+1: "It may once have been a mark of a first-rate intelligence to hold two opposing ideas in mind, but it was now a political necessity to hold three, at least."

Why we love it: Everything Tortorici writes (and edits and recommends) should be read, but this particular piece is a masterful look at the seemingly intractable position many progressive thinkers find themselves in right now. If there's any way to get through the maze, it just might be by following Tortorici.

Ariana Reines, "Life as We Know It," ArtForum: "I have found so many excuses and so many ways to hide from sight."

Why we love it: This is one of the most provocative pieces written in the recent deluge of "Me Too" essays, dealing as it does with silence and voice, responsibility and guilt. There are also some beautiful star-studded bits at its end because Reines can do anything with words—and should.

Paul Thomas Anderson, Phantom Thread: "No one can stand as long as me; I can stand forever."

Why we love it: Standing is strength. And strength is beautiful.

Lana Del Rey, from Twitter (but also, and actually, from Emily Dickinson): "It is also November. The noons are more laconic and the sunsets sterner, and Gibraltar lights make the village foreign"

Why we love it: It's Del Rey quoting Dickinson. What could be better than that?