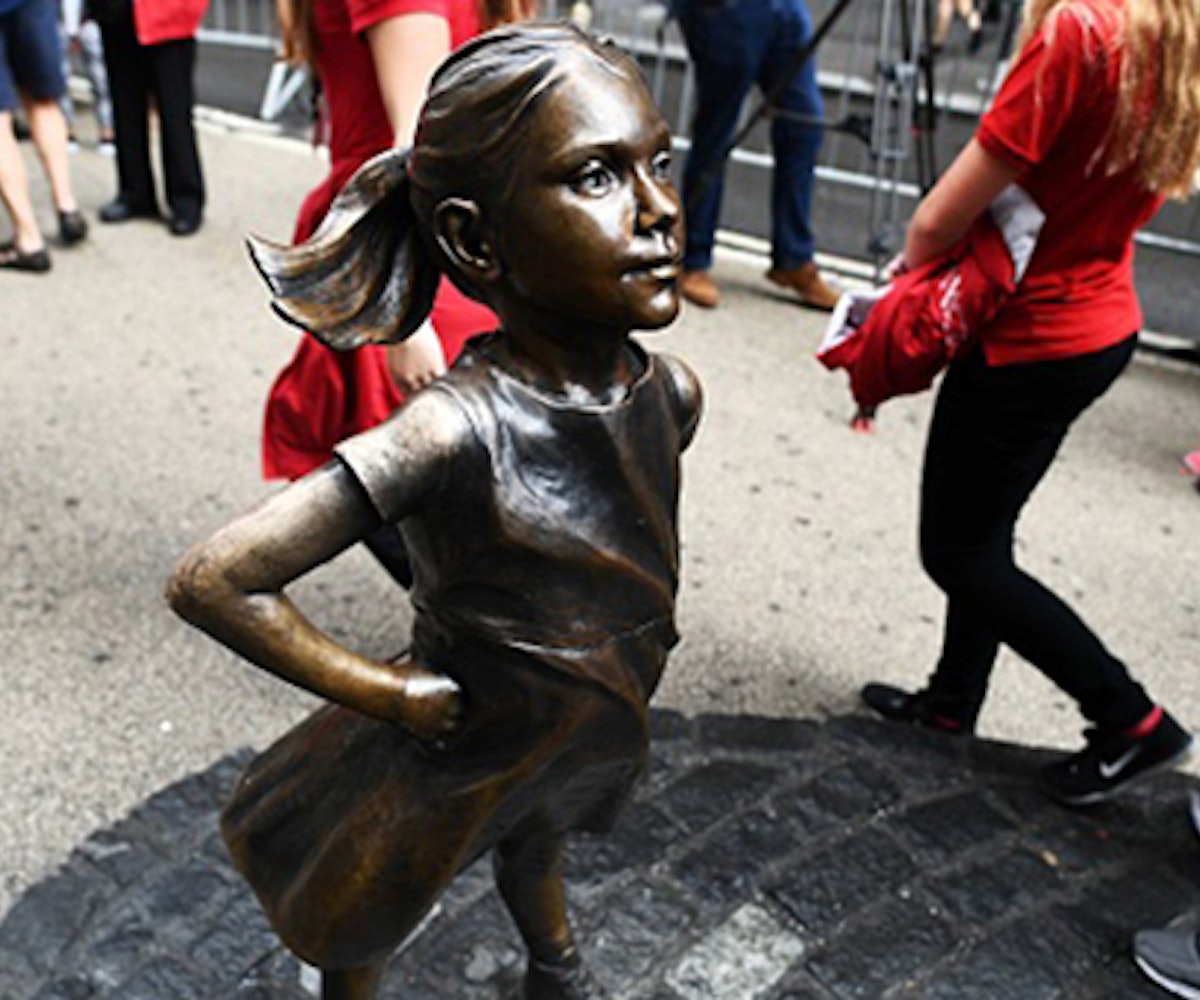 There's been a lot of debate recently about corporations co-opting feminism in order to make money. While it's certainly nothing new, marketplace feminism has been a thing for decades, it's heightened over the past few years, reaching fever pitch after Donald Trump took office. However, a lot of these companies touting "empowerment" and "equality" as their core values aren't actually practicing what they preach. On Thursday, the firm behind the Fearless Girl statue—which was installed in front of Wall Street's charging-bull statue on the eve of International Women's Day this year—settled a lawsuit accusing them of underpaying women and people of color.

State Street Corporation will pay $4.5 million in back pay and about $500,000 in interest to affected employees, the New York Times reports. The news broke just after Miramax's Harvey Weinstein was revealed to have decades-worth of sexual harassment allegations against him. A liberal who regularly donated money to Democratic campaigns—some senators have vowed to donate his contributions to charity—Weinstein paid off his accusers and somehow hid the harassment rumors in plain sight for years.

Also on Friday, a staff writer for Vice's women-oriented site Broadly, Mitchell Sunderland, was discovered to have emailed with alt-right journalist Milo Yiannopoulos. "Please mock this fat feminist," Sunderland wrote to Yiannopoulos in May 2016, according to a BuzzFeed report, along with a link to a story by New York Times columnist Lindy West. While he worked as Broadly's managing editor, Sunderland was passing along their content for Breitbart to mock. For instance he sent a Broadly video about the Satantic Temple and abortion rights to Breitbart, which published an article the following day titled "'Satanic Temple’ Joins Planned Parenthood in Pro-Abortion Crusade.”

Other CEOs of "feminist" and forward-thinking companies have been exposed for underpaying women, not offering benefits like maternity leave, and causing hostile working environments. Miki Agrawal, the founder of Thinx, a period-absorbing underwear that gained attention for the company's progressive, sex-positive ad campaigns, was accused of sexual harassment by the company's former head of PR, Chelsea Leibow. Other employees complained of an "erratic workplace culture," according to Bitch Media's Andi Zeisler, "substandard pay, shitty labor policies, and a boundary-free leader who touched and talked to employees inappropriately under the guise of openness."

The "girl power" clothing site Nasty Gal saw a similar fate. Former employees told Jezebel's Anna Merlan that the company fired “multiple pregnant employees either before or during their parental leave,” as well as one man who was about to take paternity leave, and a woman who was waiting on a transplant surgery. In 2016, Nasty Gal filed for bankruptcy.

We need to hold accountable companies who pay lip service to feminism but are actually doing nothing to secure equal pay and access to things like maternity leave and healthcare. Feminism isn't all Instagrammable slogans and viral ad campaigns. The most radical thing a company can do right now isn't make soap bottles in the shape of women's bodies, it's actually raise the pay of every woman at your organization to be equal with their male counterparts. It's putting money toward causes that benefit marginalized communities. While a Fearless Girl statue might encourage a young woman to take on a male-dominated industry, we need a lot more than just symbols right now.