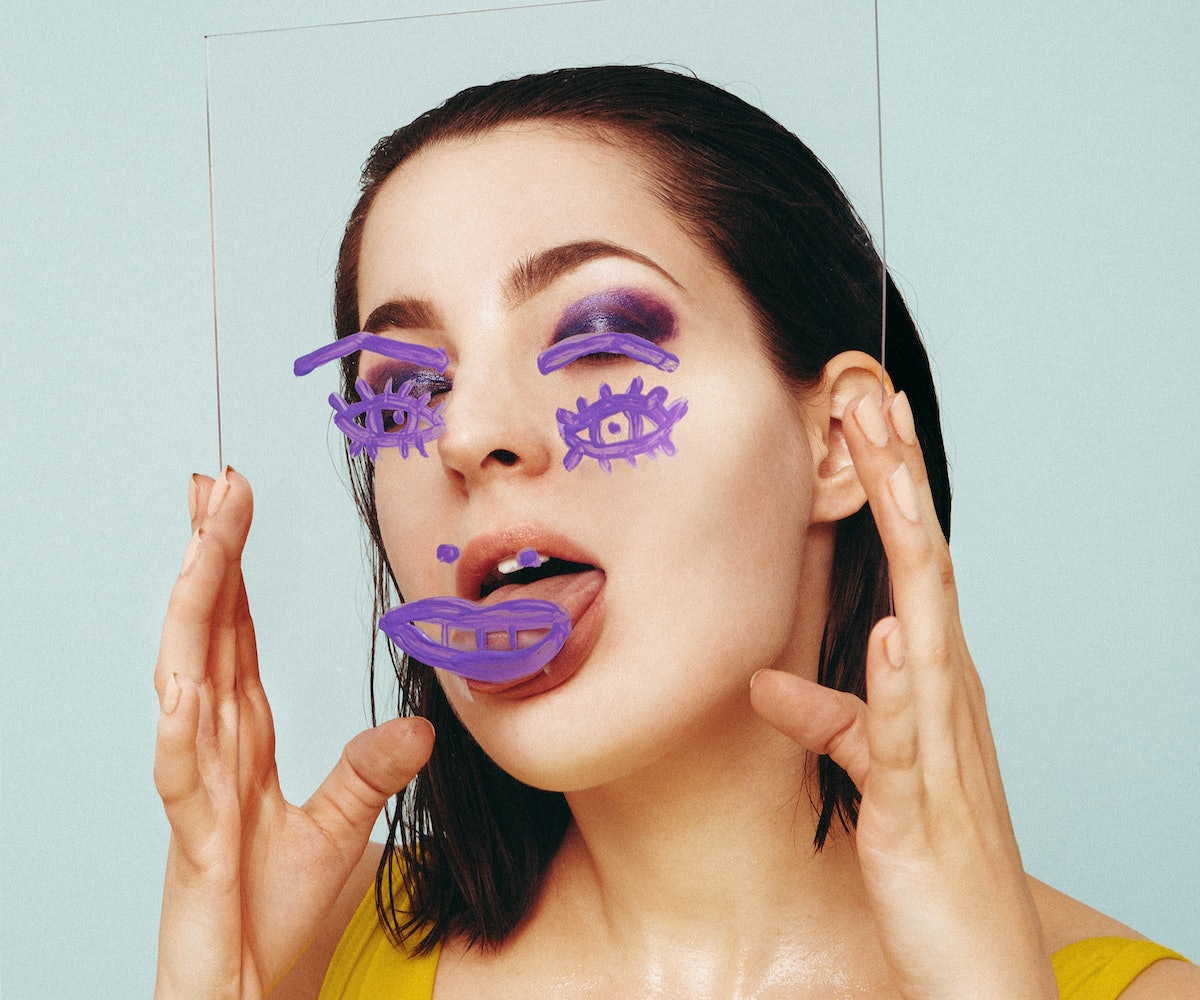 Historically speaking, we have seriously been deprived of the art that women create. Women have been bombarded by the omnipresent male gaze and shut out from art institutions like galleries and museums. But, plenty of women have been working to change that reality, and now there's a new collective of young women joining the fray.

The girls in this crew are no newbies to the art scene, though—Art Baby Girl has her own online gallery, Ruedy has shot for the likes of Betsey Johnson, Stone was once a graphic designer at MTV, and Louise has been featured in publications as both a model and a stylist. Individually and combined, these creatives have a list of credentials that rival any mediocre dude in the industry.

Linking up IRL and through the internet, the artsy girl group started the project trying to play off one another’s artistic styles. Obviously, that was just the beginning. What resulted from their artistic fusion is an intensely important photo series that explores femininity, the female gaze, and notions of bodily autonomy that play out through explosions of pastel colors, texture, and kitschy press on tattoos and gloss—lots of gloss.

We recently spoke to the collective about how their girl-powered collab came about. Check the interview out in the gallery, below.

How did everyone become friends?

I know Norah from going to Minneapolis College of Art and Design for undergrad. I know Savannah because of the art scene in Minneapolis. I met Grace through the internet because I love, love her work. Grace and Savannah happened to work together. Oh, and we all worked at American Apparel [

I went to the same art school as Norah and Savanna, and when I moved to New York City, I met Grace because we both worked at the same place and became friends.

It's actually kinda cute that we've all worked at American Apparel at one point in our lives. I've known Savannah since I was 17. Savanna and I went to art school in Minneapolis together, and since then have definitely become closer friends after relocating out East. New York can be a really isolating place, so it's nice to know I have a group of friends that have roots in my hometown. I met Grace the day of the photo shoot, but I've been following her work for quite some time.

I met Savannah because we both used to work at American Apparel and Savanna reached out to me about collaborating last summer. The three of us have worked together on a few shoots before this, and it has always been a really fun experience.

How was the actual experience of working together? What were some of the highlights?

It’s so fun. We are always chill about it, and it comes together so organically. I would say highlights are the actual shooting part. We always find a way to make it funny or inspire each other in weird ways.

It's always fun working with these girls. I think the highlight was just the vibe in general; having fun and hanging out and coming up with ideas as we worked. We were all definitely giggling when Grace was drawing on me.

The actual experience of working together was really great. I think we just wanted to have fun and weren't really thinking too hard about the overall production and concept of the photos. We get along really well, so it felt more like we were hanging out while simultaneously snapping some photos.

It’s always fun to work with a group of artists who have complementing aesthetics. I felt really comfortable thinking out loud and trying things on this shoot, it was a new way of incorporating my art into photographs.

What was the inspiration behind this shoot?

ads but with a grotesque element mixed in. But mainly, our goal was to create a space for all of us to get out of our daily routines to create images solely for ourselves.

Can you tell us more about the theme?

The theme was to work together and all bring an influence of our work together. It was about playing with material and doing something we haven’t done. Also using a human to use the material on.

Girls working together and having fun.

How does feminism come into play here?

I think us all being women is one thing. It’s also all of our own practices combining. We all have such a strong influence of women in our work. It all combines to effortlessly create a strong feminist outlook. It comes so organically.

I think everything we do as a team or individually involves being feminists.

I agree. I think everything we do deals with feminism in some way because we are women making work in a male-dominated field. Other than that, there wasn't necessarily a feminist concept, to begin with, we just wanted the photos to come about organically.

I think women have a really wonderful way of communicating with and to each other.

How do you go about catering to the female gaze in your work(s)?

I feel like the female gaze is everywhere in my work. I shoot women and even if I shoot men I feel like there is an effeminate quality. When I shoot stills, I tend to lean toward my own irony, and it’s often a play off of feminism. I show my gaze as it is, as a woman.

My photos and drawings have always come from a perspective that is very personal, like a diary. When I was a teenager my dad used to call me "Savannah Land," because I was always spacing out, always in my own little world. But that's where I still go; that's where I pull ideas from. I believe that women have this great capacity to just go inside themselves and dig and then come back and share it in an intuitive and sensory way. So I identify with that. We recognize these things about each other. We are our own subjects, sharing our experiences.

I don’t think about being appealing or likable to men in my work.

What brought you all to New York?

I was brought to New York to intern at Milk and Refinery29 when I graduated.

I was transferred here with the job I had at the time, but I always had the goal of moving here and doing creative things.

I moved here shortly after I received my bachelor's so I could explore more creative opportunities New York had to offer. Similarly to a lot of others out here, I always knew that New York was a place I wanted to live from a very early age, so it was really a no-brainer.

It seemed like the most challenging and rewarding city to live in as an artist.

What is the creative community like in Brooklyn, New York, specifically?

My community of creative friends is really collaborative, I feel like we are always bringing each other into projects or connecting each other to other creatives.

The arts community in Brooklyn feels very small sometimes. It can be really comforting but also really isolating. Often it can feel like a high school lunchroom, and all you want is to sit at the cool kid's table, but in reality, I guess that's just your twisted perception of things. Don't get me wrong, I've had great experiences here, but it can be hard. I think this feeling has been heightened since Instagram has become such a major platform to share and promote your work. I've definitely noticed how this accessibility has changed the community, there's definitely this push and pull between real life versus virtual singular experiences.

My creative community originates online, but it’s great that some of us do live here so we can collaborate IRL sometimes.

How would you describe your aesthetic(s)?

I would describe mine as ever evolving. I like to evoke a moody and off-putting side to my work. I love when things are ironic. I love to shoot people. I love to create a mood. With this specifically, it’s a certain genre I don’t often get to express: colorful, flat, and super crazy. I like to experiment with color and texture.

I am inspired by many aesthetics, but at the moment I'm using bright colors and minimal compositions, with details that are slightly off or unexpected.

Justin Bieber eating a corn dog in a pink convertible.

What else is everyone working on?

So many things! I’ve been working with a lot of brands lately, test shooting. I’ve also been shooting people from the internet that I’ve always wanted to shoot. Being more creative and less black and white is something I’m hoping to accomplish with this change of season. It’s a week by week thing. I also have so many fun editorials I’ve been hiding up my sleeves.

I've been working on a "secret" new app with Paperless Post, hopefully, it will be out summer of 2017.

I’ll be releasing some new items at the NYABF next week at PS1, and I’m painting a mural and curating an exhibition at Holyrad Studio at the end of September for BOOM called “I Play No Games.”