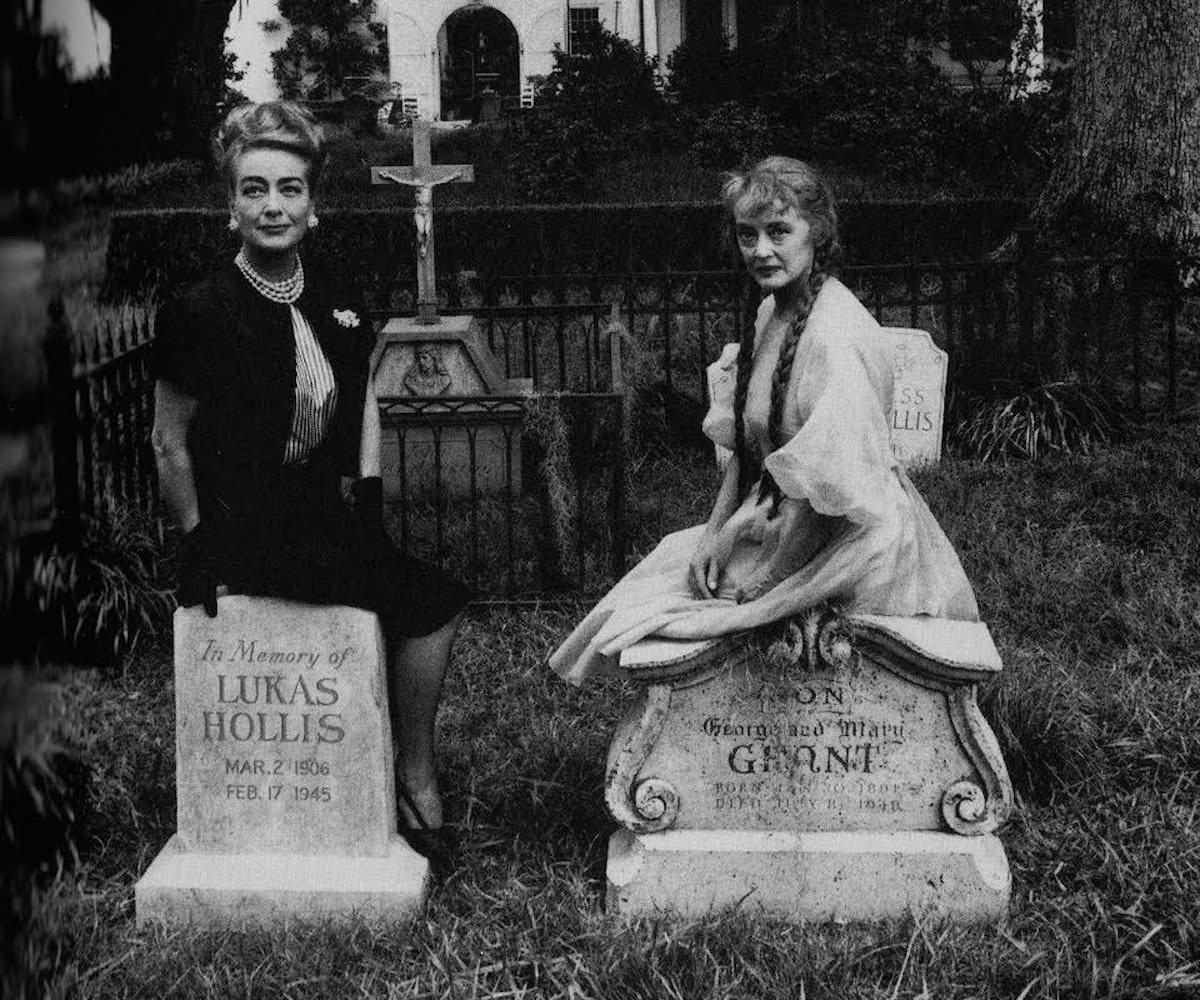 Shooting has started on Hush… Hush, Sweet Charlotte, and Joan completes her complicated entrance in one take, which impresses Bette. Once Joan gets on the set to do another scene, however, Bette tries to undermine her, stage whispering to their director Robert Aldrich, “You’re not going to let her do it like that, are you?” On the one hand, what Bette is doing is wrong and meant to dent Joan’s shaky confidence. On the other hand, she is trying to get Joan to play the role of the secretly villainous Miriam Deering in a more layered fashion, which would have actually improved Joan’s performance. But Bette goes about this in a tactless way.

Aldrich confesses to Joan that Bette has a producer credit on this picture, and so Joan starts to really feel threatened. Dominic Burgess’ Victor Buono tells Bette how much he admires Joan’s death scene in Humoresque (1946), but Bette sniffs that Joan walked into the sea to die without getting her hair wet. And then Bette talks to Aldrich in bed about her first screen test when she was a 22-year-old virgin and she heard Jack Warner asking, “Who would want to fuck that?” She also remembers Warner saying that he wished she looked like Joan.

All of these scenes on location for Charlotte have an aimless quality, as if the stakes have been lowered since the episodes where they were shooting Baby Jane and needed a hit so badly. Bette and Joan both still need a hit, but the tension between them has been allowed to cool off. What’s missing is the genuine antagonism between these women, which was actually at its height during the Charlotte shoot. By most accounts, Bette was out to deliberately intimidate Joan on the set of Charlotte, but that strong action has been dissipated for yet another attempt at seeing the sisterhood between them. That’s all well and good, but Bette’s Margo Channing would have looked at this script and said, “It won’t play!” Usually a story based in truth is changed in order to make it more dramatic and not less so.

There is a confrontation scene between Bette and Joan here late at night when Joan has been drinking; it is tied not to competition and anger, but to self-pity. Bette and Joan had plenty of moments of self-pity in their lives and on the screen, but this scene is fatally soggy with that inactive emotion as they directly address their mutual strengths and weaknesses. “The answer to feeling less attractive isn’t to make yourself uglier!” Joan shouts at Bette at one point, a very low blow that is countered by Bette saying, “I am a character actress.” Yet Susan Sarandon is unable to suggest what Bette was like as an actress when we see her doing a scene from Charlotte because hysteria and scenery chewing is just not her bag.

The curious thing, finally, about Feud: Bette and Joan is that the main scripted conflict between the two main characters doesn’t make sense. Bette is supposed to be the great actress and Joan is supposed to be the great aging beauty. But from what we see of their actual acting work on this show, it is Jessica Lange’s Joan who is the great emotional actress and Sarandon’s Bette who is the older sexpot. Lange can’t stop herself from acting the hell out of Blanche Hudson and Miriam Deering while Sarandon is uncomfortable as Baby Jane and Charlotte. Bette keeps bemoaning the fact that she was never considered attractive, yet Sarandon looks uncannily youthful and sexy at age 70.

In trying to make Davis only sympathetic on this series, she has been made less spicy and confrontational than she actually was. Sarandon has Bette’s big eyes and she can present herself in a tough manner, but that doesn’t make her Bette Davis in any other way. She has worked hard to put together a believable and rounded characterization, but there is something serene about her toughness that doesn’t gibe with the turbulence and neuroticism within Davis. The real Bette was volatile and often a pain in the neck, but Sarandon’s even-tempered Bette is a good sport who keeps fading into the woodwork. Sarandon is an excellent actress and she has done some major work on screen, especially in Lorenzo’s Oil (1992) and Dead Man Walking (1995), but emotional volatility is either something you have or you don’t. It cannot really be acted.

Lange doesn’t look much like Joan and she is unlike her temperamentally in many ways. She is very feminine and unable to catch the masculinity of Crawford, the brute hardness that overtook her as she aged, the imperious boss issuing instructions. When Lange gets upset or angry on this show she shoots her feelings all over the place, whereas Crawford was lethally and monolithically direct on screen with emotion and anger. But Lange has managed to play lots of different aspects of this complicated woman, and she has brought a great deal of insight and sympathy to her portrayal (sometimes too much sympathy, but again that is the fault of the writing).

Once Joan realizes that her role is being cut by Bette, she retreats to a hospital and pretends to be ill. When Aldrich visits her, Joan offers him absurd suggestions to beef up her part, and then she tries to vamp a studio doctor who is examining her, but she gets rebuffed. (As she tells her friend George Cukor, “The only bed I can find any power in is this hospital bed.”) Joan returns to the set, but when Bette once again suggests cutting dialogue for her character she has a “relapse.” Aldrich finally casts Olivia de Havilland in Joan’s part, and Mamacita quits her job after Joan has thrown one too many vases of flowers at her head.

There is one more episode to go for Feud: Bette and Joan, and it has been hinted that it will take us up to Joan’s death in 1977. The 1970s were very sad years for both Bette and Joan, but this is a show that will most likely find some upbeat way of proving their sisterhood yet again and telling us in dialogue how all those mean sexist men (and mean female gossip columnists) kept them from being friends.

But some women and some men are natural enemies, and some hatreds can be as stimulating and enjoyable and productive as love affairs. You don’t hate someone without some kind of intense thwarted love lurking somewhere as a flip side to that emotion. And hater-lovers like that can never be just friends.