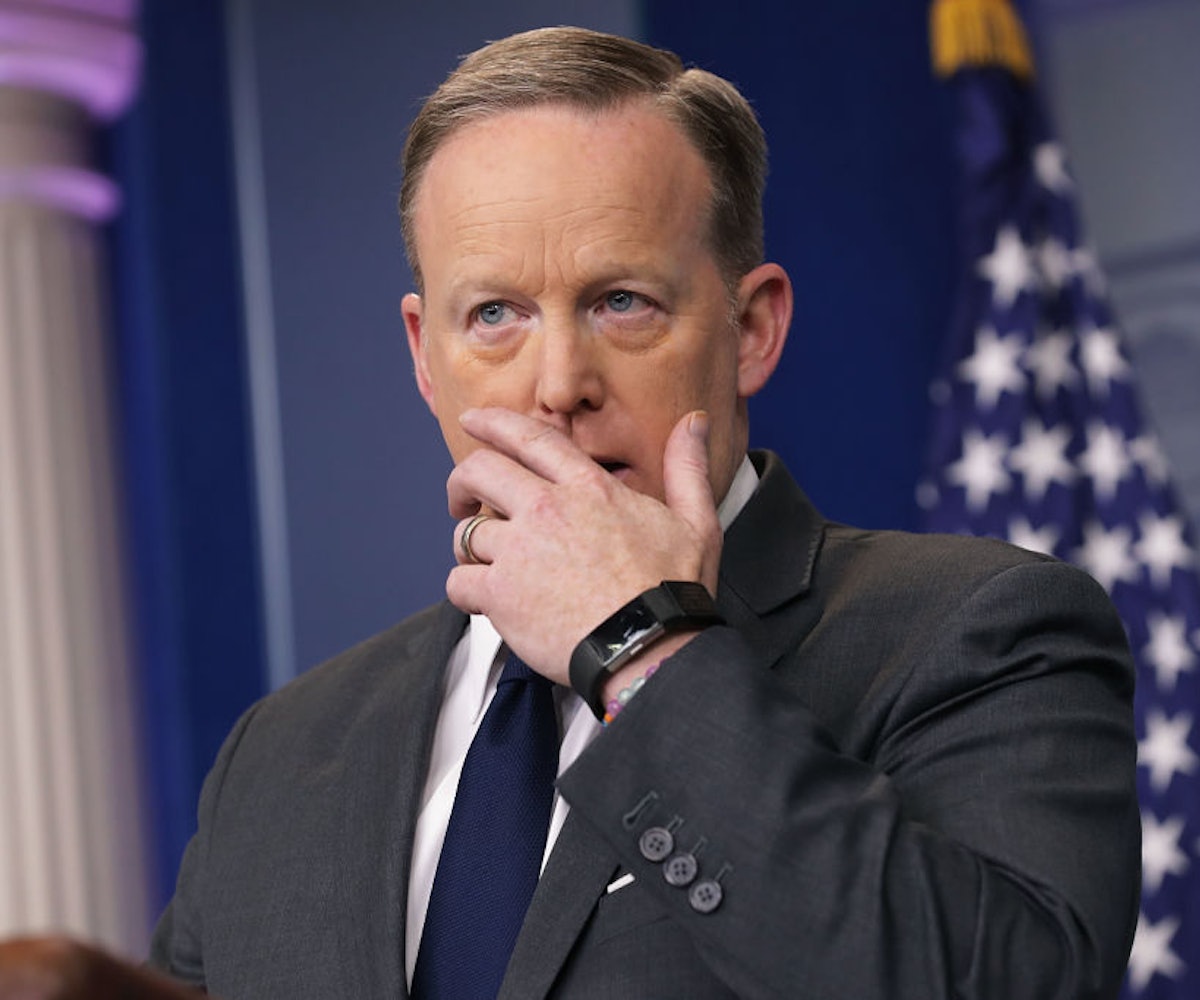 An ongoing theme of the Trump administration has been the gross incompetence with which they do, like, literally everything. From the senseless (and, by all accounts, strategically ineffective, though still deadly) bombing of a single Syrian airfield to the failure to pass a health insurance plan and the inability to plan the annual White House Easter Egg Roll (no, really), there seems to be nothing that this administration and its members can't completely mess up. But the latest example of their collective idiocy still manages to stun because of its fundamentally horrific nature.

What is it, you wonder? What could possibly be worse than every other awful thing they've done? Well, how about denying that Adolph Hitler—whose methodical murder of six million Jews and millions of other Europeans often via the use of gas chambers—ever used chemical weapons, to begin with? Yeah, we were shocked too.

Today, White House Press Secretary Sean Spicer, in an ill-advised attempt to demonstrate that Syrian dictator Bashar al-Assad is truly in a class of his own when it comes to the atrocities he bestows upon his people, compared Assad to another guy who committed some atrocities against his people: Hitler. Now, perhaps you're thinking, Oh, well, Spicey's mind is occupied with the upcoming Easter Egg Roll, because he probably has to dress up as the bunny again, like he did during the George W. Bush administration. He probably didn't say anything all that bad. He was probably just trying to say Hitler and Assad are similarly awful.

Alas, no. Instead, Spicer utilized Hitler—Hitler!—as an example of somebody who showed restraint (whaatt?!?) and who, unlike Assad, didn't "sink to using chemical weapons." I repeat: What?!?

Now, comparing politicians to Hitler is something that happens all the time. (There's even a name for it: Godwin's Law.) But usually, when people invoke Hitler, their intent is to demonstrate just how utterly horrific Hitler is, not to, you know, be all, "Hey, the guy wasn't that bad." But that's exactly what Spicer did when he mentioned Hitler at his briefing today.

And even when reporters tried to give Spicer an opportunity to explain himself, he only dug in further, saying, "[Hitler] was not using his gas on his own people... in the same way... he brought them into the Holocaust centers." And for a third time now: WHAT?!? First, is Spicer trying to say that Hitler's victims—the millions of Jews, gypsies, homosexuals, and countless others—were not Hitler's "own people," that they were in some way enemy combatants simply by virtue of their existence as Jews, gypsies, and homosexuals? And further, what is Spicer's point? That it is somehow better to kill people via chemical warfare in concentration camps? That there is a preferable way to commit atrocities? What is wrong with this man?

Spicer's continued apologies have gotten weirder and weirder. He first released a statement saying, "In no way was I trying to lessen the horrendous nature of the Holocaust, however, however I was trying to draw a contrast of the tactic of using airplanes to drop chemical weapons on innocent people." Because apparently, Holocaust victims weren't "innocent people"?? Spicer amended that apology, changing the words "innocent people" to "population centers," but, you know, too little too late, you Nazi-apologizing monster. And on Passover, no less.

All of which is to say, while it might be hard for the White House to find someone else to dress up as the Easter Bunny this year, the time has come to fire Sean Spicer.