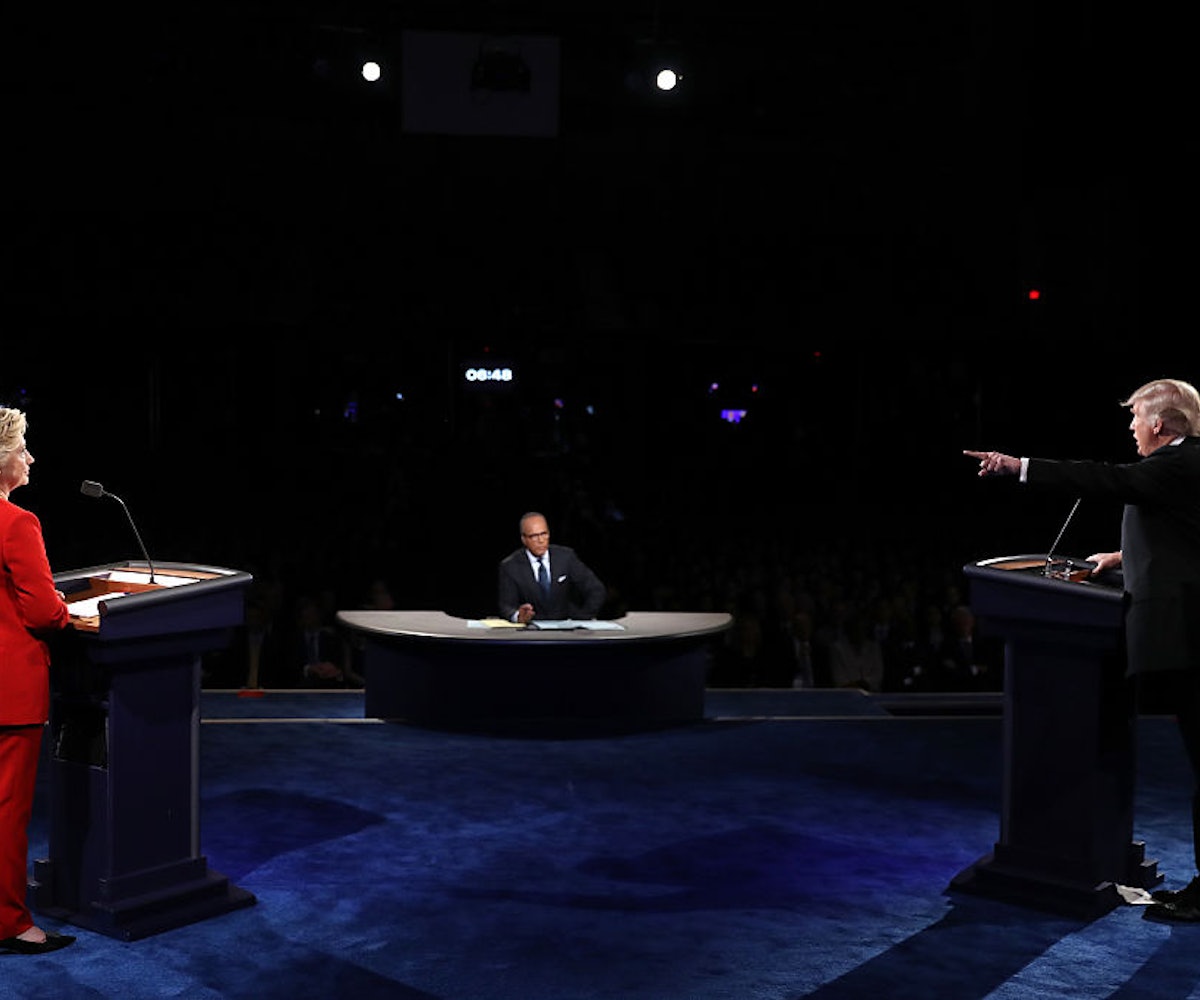 There were many moments of note during last night's debate between presidential candidates Hillary Clinton and Donald Trump. There was the point at which Trump took pride in not paying federal income taxes ("that makes me smart"), despite his assertion that American infrastructure is like that of a "third world country," which is a problem that could be potentially solved with the aid of... federal tax dollars. There was Trump's constant sniffling, water guzzling, water blowing (??), and general mouth-puckery. There were multiple denials by Trump that he'd supported the Iraq War from the beginning (but he did), that he'd ever accused China of perpetuating climate change as a "hoax" (but he did), that stop-and-frisk was found unconstitutional (but it was), and that New York City's murder rate has gone up since stop-and-frisk was outlawed (it hasn't). There were the expected malapropisms: "bigly" and "a very against police judge" spring to mind, with "braggadocious" a close third. (Yes, technically it's a word, but it's almost never used in modern dialect.) And baseless accusations, such as Trump's contention that Clinton has been fighting Isis her "whole adult life," which would be hard, considering Isis is less than 15 years old, and Clinton turned 18 in 1965.

But the thing which has stuck with me the most, post-debate, is Trump's response to moderator Lester Holt's question about what Trump meant when, earlier this month, he said that Clinton doesn't have the "presidential look." Holt's question was undoubtedly an allusion to Trump's many on-the-record sexist remarks about women's appearances, a problem of the candidate's which was brought up last night, but Trump deflected the original question and instead focused on a quality of hers which he has questioned before: stamina.

Holt tried to bring Trump back to the original query ("The quote was, 'I just don't think she has the presidential look.'), but Trump refused to be sidetracked, continuing:

Clinton's response was a strong one:

Well, as soon as he travels to 112 countries and negotiates a peace deal, a cease-fire, a release of dissidents, an opening of new opportunities in nations around the world, or even spends 11 hours testifying in front of a congressional committee, he can talk to me about stamina.

She chose not to lower herself to his level and comment on the fact that, while she was suffering from pneumonia, as recently as two weeks ago, it was Trump who was visibly winded and constantly sniffling on stage during the debate.

And yet, Trump insisted that it was Clinton who lacked staying power. At a glance, this seems like one of Trump's many ultimately toothless attacks. After all, how, on the one hand, can Trump hammer home the fact again and again that Clinton has been involved in public service for 30 years, while, on the other, insisting that she has no endurance? It seems absurd. But stamina has many other associations attached to it beyond just the literal meaning. Stamina is strongly attached to common cultural conceptions of masculinity and of virility, qualities to which Trump habitually tries to lay claim, once even using another debate stage to assure the American public that he, in fact, has a very large penis.

Stamina as a concept is, therefore, difficult to detach from our idea of a specific type of male-related strength; by repeating the word, over and over, Trump was implicitly reminding Americans that his opponent is a woman, who is biologically incapable of the type of male performance with which we associate the word stamina. By saying Hillary Clinton has no stamina, Trump is saying: She's a woman. He means this as an insult. Trump's particular brand of toxic masculinity, so prevalent on internet comment threads and egg-fronted Twitter accounts, is fear-based, as is his frequent racist and xenophobic discourse. He wants Americans to be afraid. He wants Americans to be afraid of what they don't know, whether that's people of a different religion or culture, or what it would be like to have our first female president.

Trump's accusations about Clinton's stamina fell flat last night. It was demonstrably clear that it was Clinton who had resilience and fortitude; she did, after all, stand there calmly while being interrupted dozens of times. And, in the end, we can only hope that Americans will not vote out of fear; or, if they do, that what they fear isn't having a woman for a president, but having a man who has no political experience, a tenuous grasp on the English language, an even more tenuous grasp on the truth, an apparent belief that the key to ending cyber attacks is to talk about the fact that his 10-year-old son is really good with computers, and a really bad case of the sniffles.