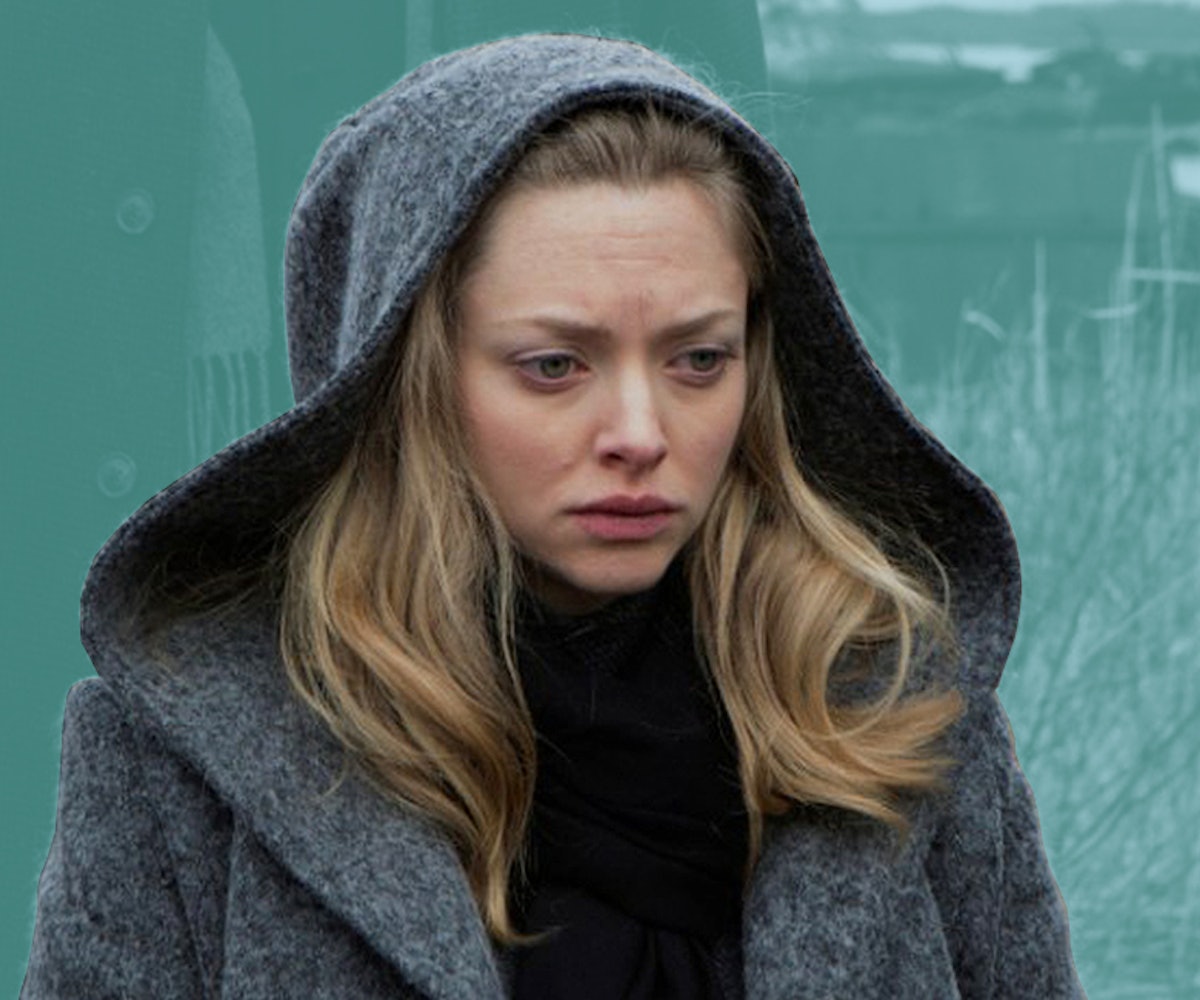 As Becky Burnett in Twin Peaks: The Return, Amanda Seyfried was the embodiment of ecstatic amorality; she was in love, and she knew her love was doomed, so she embraced it even more fiercely—eyes and mouth wide open, head flung back, looking like she was floating in… not air, but rather in utero, almost, in a red leather womb. But it wasn't a womb, it was only a convertible, driven by a murderous speed freak, who was ushering Becky along to her ultimate fate.

In Paul Schrader's First Reformed, Seyfried plays Mary, another hopeless romantic, another woman determined to love in the face of doom; all of which is to say, Mary is pregnant. Also, Mary is alone, as the men around her are rushing toward their own sorts of doom. But while First Reformed is a film that centers around religion, around the battle between the body and the spirit, and the struggle to, if not reconcile the two, at least assert the dominance of one over the other, Mary's pregnancy is not the result of some sort of divine intervention. Rather, Mary is pregnant by her husband, Michael (Philip Ettinger), a troubled man whose dismay at our planet's looming environmental catastrophe has him urging Mary to end the pregnancy, so fearful is he that their child will grow up in a world of imaginable horrors (which are, it should be said, so much worse than the unimaginable kinds).

Mary is first seen seeking help from Reverend Ernst Toller (Ethan Hawke), the minister of a small Upstate New York church, a man whose own conscience weighs heavily upon him; Toller's marriage has fallen apart after his son died in a war his father had convinced him to join. But it is Toller whom Mary asks to counsel Michael; it is Toller who is tasked with making Michael see that there is a future for our children, a future for us all.

And Toller tries. He sits with Michael, attempting to convince the despairing younger man to put aside reason, to disregard the overwhelming evidence that this planet is headed for an ecological disaster of epic proportions, to ignore facts, and have some faith—in God, in humanity, in life's ability to persist in the face of all odds. It is an electrifying conversation, one made all the more urgent by the simple fact that there is no argument within it, because nothing Michael is saying is in any way wrong—doom is looming on the horizon; it's a fact, you can have as much faith in it as you can in tomorrow's sunrise.

It is during this conversation, the one that Mary put in motion, that Toller—a tormented, adrift alcoholic—shifts his own belief system, inspired by the nihilistic passion of this younger man. Though Toller and Michael never talk again, Toller has been invigorated by the other man's belief system; whereas Toller had become a shell of a person, he is now filled with the rage of the righteous, a desire to expose the hypocrisy of a people whose refusal to alter their luxurious lives is leading to the end of all life as we know it. Toller is ready for a cleansing, a fiery end to the demonic pleasures of Earth. It is, it should be said, a distinctly masculine way of trying to solve an unsolvable problem. Use fire. Use pain. Use rage. Redemption might not be possible, but revenge is easy enough to come by.

But what of Mary?

Heavily pregnant with a child she wanted to keep, Mary is well aware of the legitimacy of Michael's fears; she worked with her husband as an environmental activist, she knows the dangers that lay ahead. But Mary does not succumb to the anger or the despair that infects her husband, that pervades Toller. Whereas Michael and Toller find that the only way they can reconcile their torturous knowledge of the world's fate is by taking varying forms of violent action, Mary chooses to wait. Mary sits. Mary slows things down. Mary's body, burdened by the life of another, moves with its own purpose, one of creation, however small, rather than mass destruction. Mary's pregnant body is the manifestation of the merging of the needs of the flesh and of the spirit, then, a reminder that the two things needn't be separate, that they're stronger when they come together, that their combined potential makes all things possible.

And yet. There is the question that must be asked: Is it humility or hubris that allows a person to bring life into the end of the world? Is Mary's determination to have her baby a product of a rational or irrational mind? What kind of privilege allows someone to ignore the sword hanging over her head? Or, perhaps the questions go back further than the choice to have a baby. Perhaps the questions should begin with: What right do we have to love one another while the world is being destroyed?

It is this question that First Reformed answers best, perhaps. It does so in part through Mary's deepening relationship with Toller; she reminds him that there is an alternative to despair, and that the answer to changing the world cannot consist solely of obliterating the bad things, but must, too, rest in the creation of good things. It is tempting to be cynical, to see this as the futile hope of a doomed romantic. But Mary's dignity and willingness to find beauty and passion in the face of so much sorrow is a reminder that while we are still living here, we are still alive, and the temptation to give ourselves over to fatalism must be resisted. Ecstasy need not exist only in the form of a drug-fueled ride to nowhere in the front seat of a top-down convertible, it can exist in quieter ways, a bike ride through a gray landscape, a body pressed up against another, an embrace before it all falls apart, an embrace that somehow manages to keep it all together.