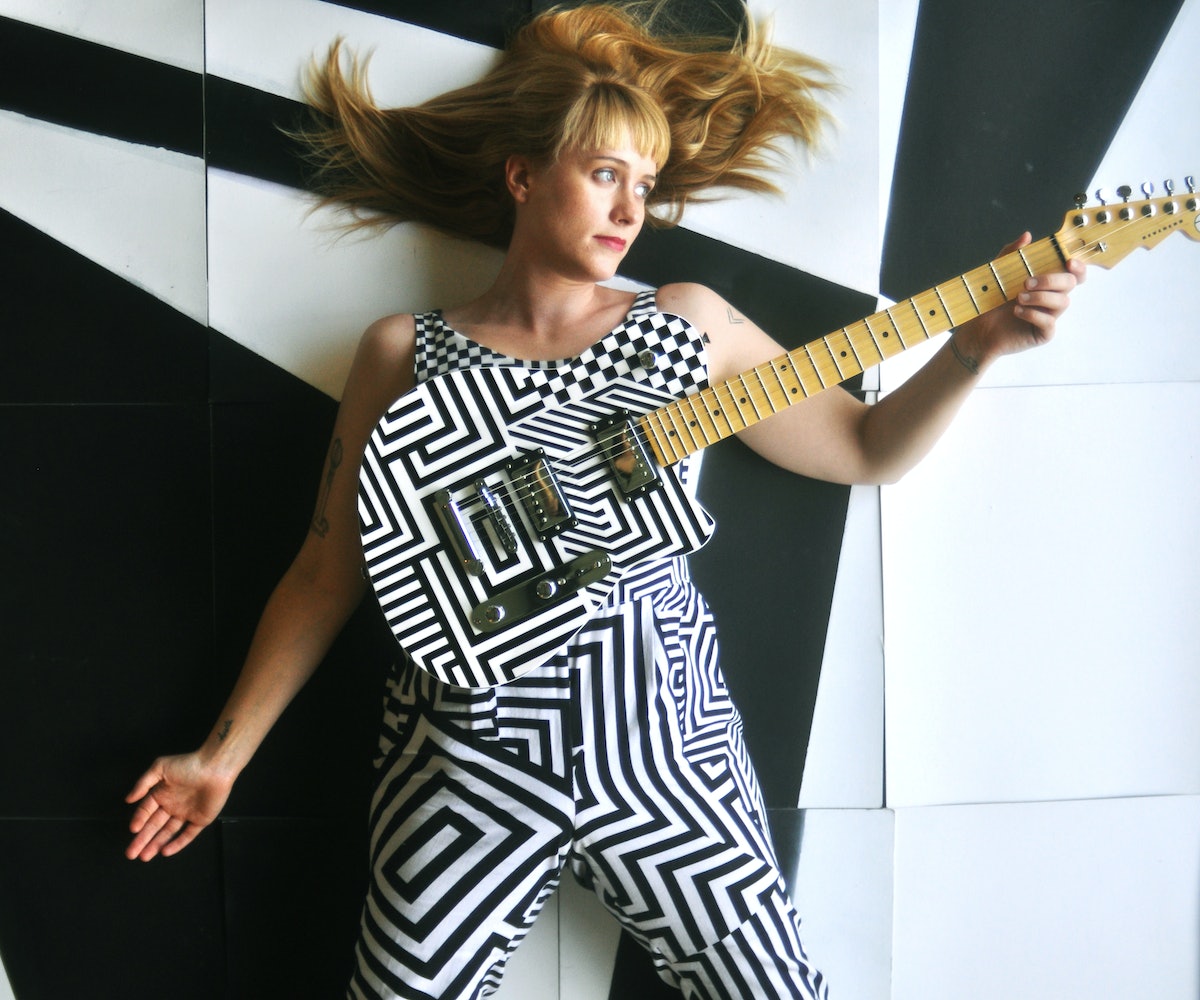 Jenn Wasner is calling from musical prison. She laughs at the term, twisting the camera to show off the keyboards that enclose her on three sides, all on loan from Nick Sanborn of Sylvan Esso. (“I try to pay it forward whenever I can,” says Wasner of her generous friend and neighbor.) Even though the musician is about to embark on a tour with her solo project Flock of Dimes (opening for her Sylvan Esso pals), there’s also the next Wye Oak album to think about.

Multiple projects and forward momentum is the musician’s bag—although you’d be hard pressed to guess that listening to her first Flock of Dimes full length. Full of gently unspooling synths, understated guitar lines, and her lilting soprano, If You See Me Say Yes is a confident exploration of complex life ideas. Key example: “The Joke,” which we’re premiering the remix by Bayonne for below, features a conversation with alternate dimension versions of herself. But as Wasner explains, life is too interesting and complicated not to be celebrated.

Between Wye Oak and Flock of Dimes I’m trying to wrap my head around how much work you do. What’s your idea of downtime?

The idea of having two projects is that I would never feel stuck in a rut because I was working on two different things. So that works. But what I failed to really recognize about it is that it means twice as much work. I have historically been the kind of person who needs to work to feel good. I have had a really hard time with the slowing down. The irony is that I’m at this point where I’m like, “I could just be a person and be okay and not feel like my identity is threatened.” But that’s not on the table for a couple of years.

How has music changed for you since If You See Me Say Yes has been released?

I’m really proud that I still feel fully comfortable inhabiting these songs and these emotional worlds. Because that was the goal. To be able to stand up in front of people and be able to sing these songs and feel good about it and feel present at all, it feels like proof to me I set out to do what I wanted to do. I get tired of things very quickly. You have to make things and put them out and see what happens. You have to do the best you can with what you have right now and see how you feel about it.

It’s easy to overthink the creative process. I approach projects sometimes like they’re tattoos, thinking, “I’m going to have to live with this forever!”

You’re not wrong. But at the same time if you lean into that too hard, you’ll never put anything out in the world. I think about my tattoos—of which I have a few, including one that says “hustle” that was a reference to the aforementioned need to not stop doing anything ever… I think about them less as "I’m going to love this forever," and more as: "I never want to be the kind of person who doesn’t have empathy and respect for the younger versions of myself." I’m a different person now than I was when I got this tattoo. But I still want to love and respect the person I was when I got this tattoo. I don’t want to ever be a shitty old person who’s ashamed of that. Ashamed of the fact I made life and made mistakes and choices. Tattoos and creativity and anything you put out in the world that has your name on it. Sometimes you fuck up. Sometimes you’re embarrassed of the things you put out in the world. But you’ve got to love all the versions of yourself.

I’ve been leaning into that idea a lot recently. It’s easier to love other people than myself.Who else is going to do that for you? You have to have real connections to other people and things. If you can’t find that in yourself you’re stopping yourself from living your life properly. But it’s work. It took me a really long time to get to that point. It’s a pretty fresh discovery for me to be really accepting who I was and who I am now and who I’ve become.

There’s a line in “Everything is Happening Today” where you do call that out a bit: “I’m as fragile as I ever was.” That hit me on the same level.My whole record is one big emotional pile! [Laughs] I think about that. Even in those moments you have the awareness. That’s step one. With the awareness you start moving with step two, which is seamlessly integrating those beliefs and ideas into your actual subconscious and your behavior and feelings. By then there’s this crazy disconnect about knowing things about yourself but they haven’t established themselves in the way your feelings and behaviors manifest. And so I’ll be like, "I’m doing that right now." But then there’s a wave of irrational emotion that’s coming from a different place, where this hasn’t fully impacted yet. I get it but there’s part of my brain and body that’s still out of my control. The only way to train it is to continue those thought patterns until they have some kind of effect. It just takes time. You can’t just get it. It’s repetition. I’m not sure if it fully happens either.

Being a human is complicated. It sure is, man! It sure is! It never stops.

Some creatives struggle with putting out art in any form because they worry people will take it as a pure representation of who they are as people. How do you make peace with that? It’s so true. The thing that I struggle with that’s very hard to explain to people is that in the moment of actually creating a thing, it is true. There’s a complete overlap between your present self and the thing that you’re making. The further away you get from it the more time passes and there’s a separation. As time passes and I’m playing the song more and more for people, that separation grows wider and wider. It becomes less about inhabiting a true and real space and more like a performance. It’s strange because you’re performing yourself, but you’re performing an outdated version of yourself. It’s such a strange thing. People who are really good at it often have more of the entertainer’s streak than I do. It’s something that I’ve kind of learned over the years, but not something that’s come naturally. It’s really hard to explain to people. I don’t want it to come off as complaining. It’s interesting from the perspective of someone who creates to inhabit those emotional spaces long after they’ve passed and expired. A friend of mine once asked, “Why would you want to wear a dead man’s skin and dance around in front of people?” I enjoy it, but sometimes there are times it doesn’t feel right. I’ve had to teach myself how to make it seem like I’m there when I’m not there. That’s what entertaining is. If I’m not being honest, I feel deeply deeply uncomfortable.

But I don’t mind it, I feel like it’s one of the few selfless things I can do with this job. A lot of time it feels like an incredibly selfish and self-serving thing to have this job. In light of everything else that’s going on in the world I can’t tell you how many times I beat myself up about not doing something that’s more helpful to others. In some small ways I think making beautiful songs is helpful to others.

I know this sounds super cliché, but given the time that we’re in—beautiful songs, beautiful art, literature, it means so much more. You can say your job might not be important, but I think there’s a lot more happening than you’re ever going to see.I think that’s true. Many people have told me that. At my best, I accept that and I’m at peace with that. At my worst, I’m hard on myself for having a selfish life. You read things like how much Arctic ice melts every time someone takes a flight from the U.S. to Europe. Why am I running around actively harming the planet so I can sing my little songs to people? There’s a lot of gray area to it. We all do harm just by existing all the time. That’s just the reality of it. You can’t control the fact you will unintentionally do harm just by existing. The best you can do is do as much good as you can to counter that. No one is utterly blameless.

Tell me about “The Joke.” It’s one of my favorite songs on the record. I’m so happy it’s going out as a really amazing remix. It’s about falling in love. It’s about this feeling that finds you whenever something momentous finds you in your life. Where past and present and future all have their eyes on you. There’s a line in the end about those moments: “The child I’ll never have, the stranger on the sidewalk, are waking up to wish me luck.” I had this vision of sitting in a room with all the lives that I could have had but didn’t. All the different alternate versions of myself that, through my choices, I abandoned, but that somewhere they still exist or could exist. I’m making a choice that’s going to change my life, and in doing that I’m going to move away from these other lives that I could have and other versions of myself that I could have been. Here they all are, being like, “I see you. Good luck.” That song is really significant to me still today for that reason.