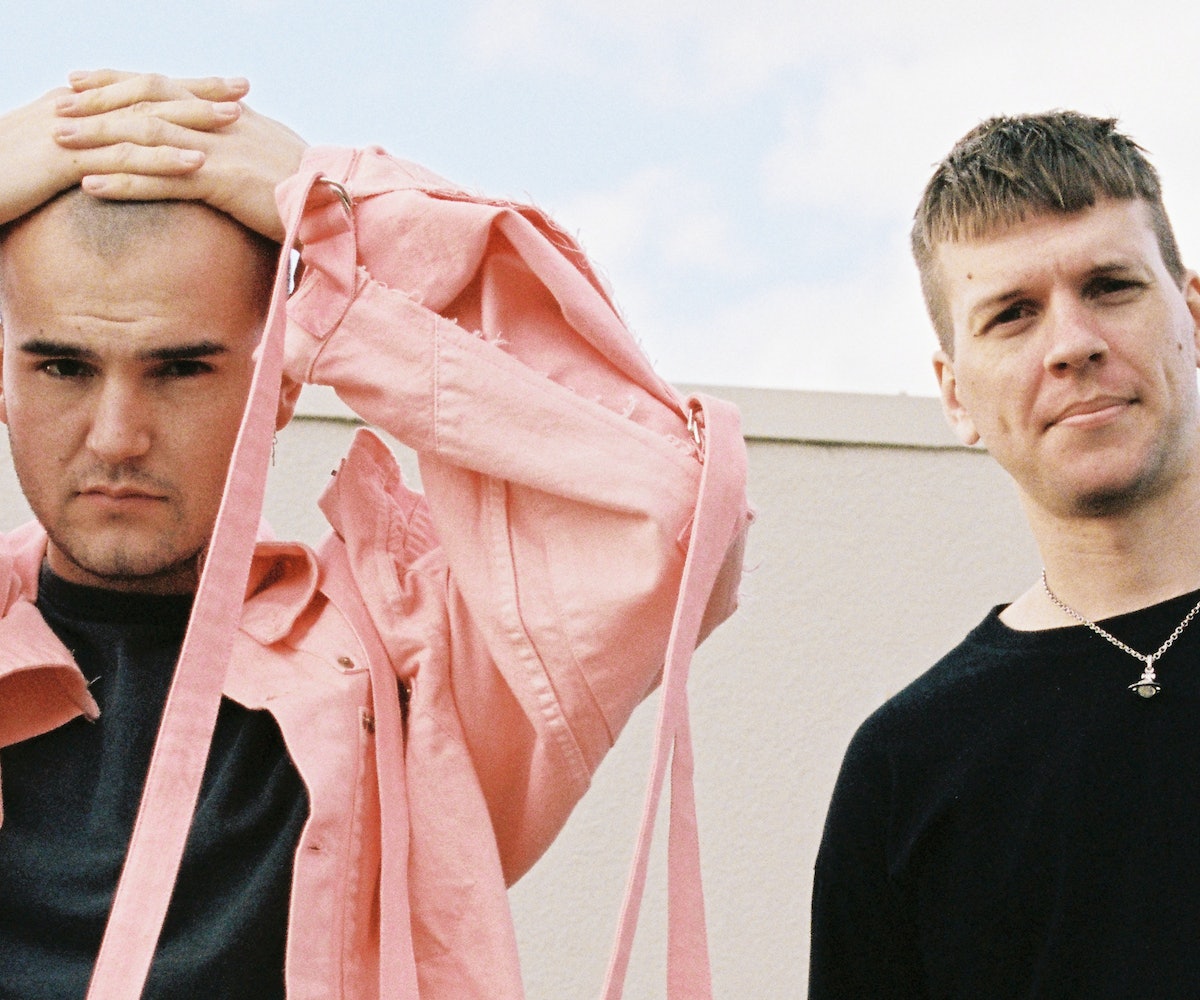 Together, New Zealand natives Barnaby Matthews and Conor McCabe make up Fortunes., a musical duo that blends hip-hop, electronic beats, and the raw emotion of R&B to lay down some pretty sensual tracks. And before you wonder if there's a typo, yes, that is Fortunes. with a period at the end. Why? Because SoundCloud suggested “Fortunes123,” and the duo was like, “Nah. Let’s just put a dot at the end.”

Barnz and Con (as the producer and vocalist are respectively known) went to high school together but only started making music together once they'd moved to Melbourne, Australia, a few years after graduating. In 2013, they dropped a cover of P!nk’s “There You Go,” but don't try and hunt it down: “That was the first thing we put out. You cannot find it online. It's buried,” says Matthews. McCabe thinks this is a good thing: “I sound so bad on it—like, I do not know what was going on.”

Fortunes. is now signed with Future Classic, and their latest EP, Undress, offers singles "501s" and "Focus," which have received over 3 million listens on Spotify and ardent reception from radio stations and music blogs in Australia and New Zealand. The two are currently in Los Angeles recording their debut album, coming "who knows when... soon." Get to know them better in our interview, below.

Can you guys give a little history of where you're from and how you started to make music?

Conor McCabe: I'm from a small town in New Zealand called Raglan. It's a little beachy, surf-y, hippie-ish [town]—but so cool. And I just always sang, and then went to high school in Hamilton, which is where Barnaby went to school. We went to the same high school, but we didn't really know each other.

Barnaby Matthews: I grew up in Hamilton, and I was a drummer and played in lots of bands as a drummer through high school and past high school. And like Conor said, we went to the same high school, but we were a few years apart. I was a few years older, and then I moved to Australia, and I was living in Melbourne just working at a cafe, and then Conor moved to Melbourne separately a bit later and came into my cafe where I was working.

CM: It was the first day I got there. Because our friend worked with you. We came in, and I was like, "I know that guy,” but I didn't say anything 'cause I was shy or whatever. And then a bit later we were at a party, a housewarming party, and then I saw you, but I was more wasted and I was like, "I know you. We went to high school."

BM: It was a strange string of events. And then I was making beats at the time, and then after that party, I was like, "Conor, do you want to come and try and sing on some stuff?" And that's how we started.

How did growing up in New Zealand impact your musical sensibility?

BM: I mean, Hamilton is a pretty small city. It's just mainly a dairy farming city, and there's not that much to do, so me and all my friends always played in bands just 'cause it was a boring place to be. I feel like if I grew up in Sydney or Melbourne or something, where lots more stuff is going on, I probably wouldn't need to entertain myself with music. Maybe growing up in boring places is good for creativity and getting into something.

CM: My town's a surf town, and everyone else would be surfing, but I don't really swim. And whenever I tell people I'm from Raglan, they're like, "Ah do you surf?" I'm like, "No."

BM: It's probably the most famous surfing town in New Zealand.

CM: I just always sang. There’s a music festival in my town that we would go to when we were growing up. It's called Sound Splash, and it was kind of a reggae festival. My mom is a dancer, and we toured around lots of festivals.

BM: He was a festival child.

CM: I was such a festival child! Growing up in New Zealand and being around a lot of New Zealand music from going out to all these festivals, I think it has a really different kind of feel to the music, especially on the reggae side—and that's mostly what we were around.

What's your musical process like? Where do you get the inspiration for your lyrics?

BM: We're still kinda figuring it out, but, usually, I'll just be making beats, usually by myself, and Conor will usually write lyrics by himself. Just words without melody, like straight-up poetry. And I'll make pretty simple beats to start with, and then we'll get in the studio together and sort of go through what I've been making and what kind of emotions that pulls on to Conor and what words would suit what he'd been writing, and then we'll sort of marry the two together. That's kind of the basic thing we've been doing. But being in L.A., working with other producers and other songwriters and stuff, is cool because you get to see how other people work and get out of our usual routine, which is going to be very helpful. It's been pretty productive so far.

CM: I get inspiration just from laughing, definitely. Laugh and love. But since I've been here, I've written two songs, and both of the songs I've written in the last few days have been from conversations that I've had since I've been here. Just like random little conversations. And then I'll go back and like think about it and turn it into a song. But usually, if I am feeling a way, I try and just pick up on a little thing within it and expand on it and try and come up with an interesting concept for a song.

My favorite song right now is probably "Focus," so I'm curious about what the inspiration was behind that song.

CM: I think I started writing that song when I was walking to work and when I was at work. I was in love with someone who was still in New Zealand, and this was when I was in Australia. And certain days I'd be, like, working, but I'd be super-distracted by just getting in my emotions. I guess it's kind of just about getting distracted by someone and also them not being there. The bridge is a lot about that: "You can call me a homebody/ But these walls have no hold on me." I'm trying to think of the lyrics and what they're about. Yeah, it's like, "Come here. Teleport over here."

What was it like working on a project like ThirtyDaysOfYes [a mixtape whose proceeds raised money for marriage equality in Australia]?

CM: It was cool to be a part of it. It wasn't really like we were working on it as a project. I had been writing that song for a year or two before we released it and when all of the marriage equality stuff was happening in Australia. Just being from New Zealand and not being able to vote in Australia, I was really feeling like I needed to do something.

BM: Yeah, it was pretty frustrating. So that was a song we were gonna save for the album we were working on.

What do you guys have planned for your debut album?

BM: We're still in the writing phase. We've got lots of songs.

CM: I think the plan right now is to write some singles. I feel like we've got some good songs. My plan for the album is to really connect with people. [So that] when people look back on it, they're like, "That was the time of my life. I remember how I was feeling at that time and I was listening to their songs." And when we had our goodbye show in Melbourne before we left, and we played mostly new songs and everyone was crying, and I was like, "Yes! That is what I want." Like cry, cry, cry. So that's one plan.

Why did you guys choose to come to L.A.?

CM: Most of our label is based here.

BM: And they just finished building this studio they're having a bunch of people work out of. Mainly just to get out of our usual environment and our usual creative place, because we've been working mostly in the same space for the whole time we've been Fortunes. And we get to work with other people, because it's usually just me and Conor like 99 percent of the time, so we've got a bunch of songs that we wanted to try to get some fresh ideas and perspectives.

CM: Yeah, and I wanted to take a step up in hopes that the music will take a step up as well. I was like, "I feel like if we just stay and do it all in Melbourne that it will all just be the same." You know?

BM: Yeah. Trying to push ourselves up a little bit and elevate.

Do you guys have any advice for someone who may want to enter the music industry?

CM: I would say be yourself but like… in your art and your writing especially. Just be yourself and have your own point of view from what your experiences are. And draw from your whole life, because it's all interesting no matter what kind of life you had.