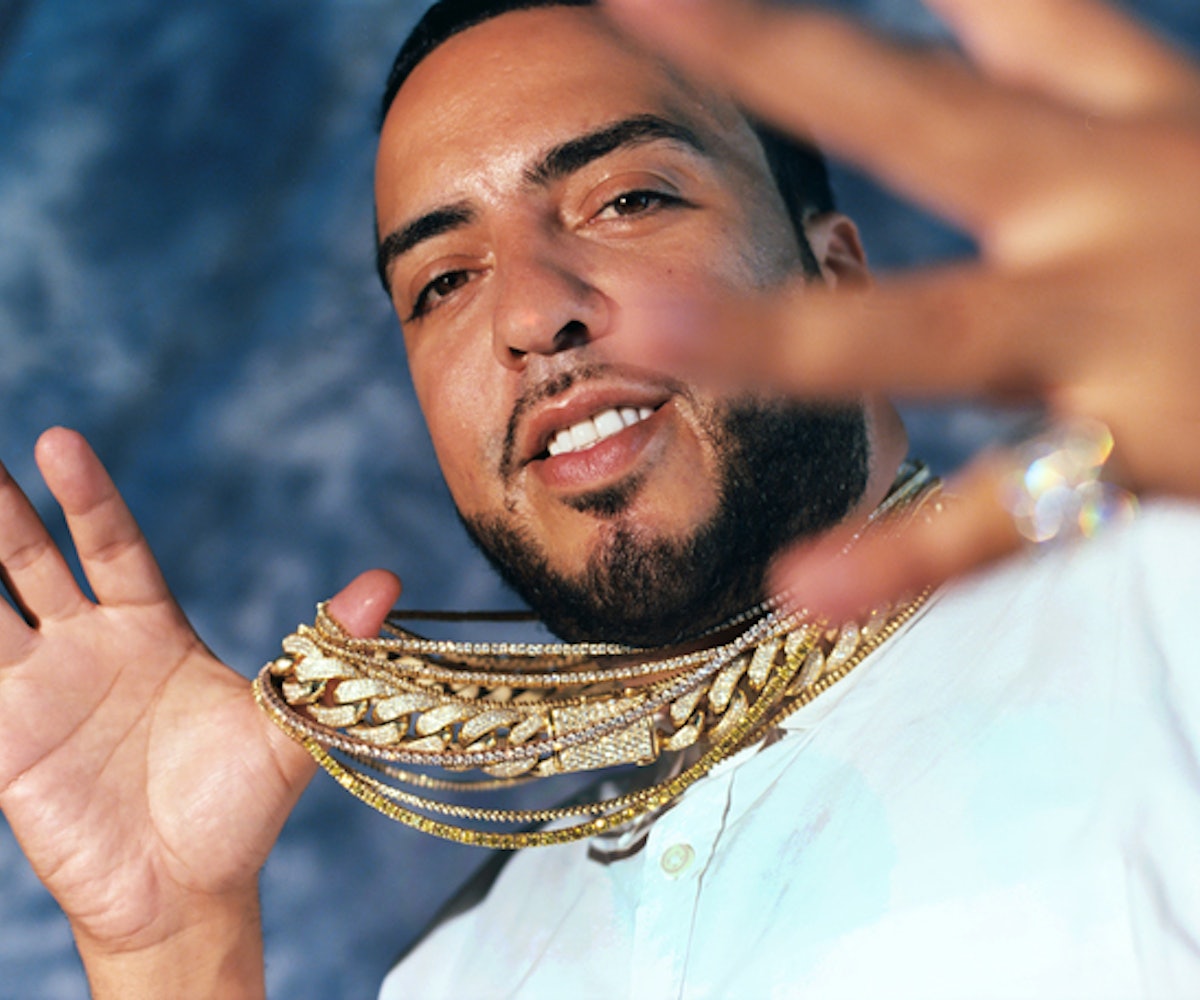 “Her ass fat/ You could park 10 Tahoes on it,” is unabashedly one of my favorite French Montana bars. Largely known for club hits and coke rap, the Moroccan-born, Bronx-raised rapper and founder of the Bad Boys Records and Maybach Music Group imprint Coke Boys just released his second album, Jungle Rules, and on the day I interview him, his first single off the project, a collab with Rae Sremmurd’s Swae Lee, entitled “Unforgettable,” has gone double platinum. It’s arguably the Song of the Summer.

Montana and his music were never considered particularly “woke,” but it didn't matter. He carved his path and has steadily progressed along it. He’s also managed to maneuver through the music industry unscathed by scandal or any problematic allegations from women, which is unfortunately—and increasingly—rare. We’ve seen both Xxxtentacion and Kodak Black make XXL’s Freshman List (a nod French himself once received) while being in jail or on trial for violent crimes against women (among other charges). And it's not a genre-specific problem: Even after Kesha accused producer Dr. Luke of sexual assault and battery, sexual harassment, gender violence, emotional abuse, and violation, Sony kept him on payroll and would not release Kesha from her contract. And in the last 30 days alone, we watched A$AP Mob co-founder, A$AP Bari, sexually assault a women on camera (and subsequently lose his deal with Nike), a story run on R. Kelly’s continued manipulative behavior with young women, and Rick Ross admit he won’t hire or sign women because he’ll need to have sex with them. Or, you know, as he puts it, “I’m spending so much money on her photo shoots. I gotta fuck a couple times.”

Amid all of these infuriating occurrences shedding light on the lack of value given to women in the music industry, nearly all of French’s team, aside from security and his manager, Tony Sal, is made up of women. His assistant is Maria Gialouris. He calls her his "day-to-day," and it’s clear she’s the right-hand (wo)man he needs. There’s Dina Sahim, his project manager, and Tammy Brooks, his publicist. Emily Bustamente is his stylist that keeps him looking fresh; DJ Duffy is his DJ; Zoe Alicia is his A&R, and has been with him for about eight years. When Alicia recently joined Epic Records full-time, she, L.A. Reid, and French even worked it out so she could still work on French's team. Then there’s Jackie Carrasco, who does marketing and consulting through Lola Media Group. And finally, there’s the founder of Lola Media Group herself, Lola Plaku, who has been with French in multiple roles. “Lola, now she does all my social, all my everything. Wherever I lack at, I send her. She’s like the Oscar Robinson of the team. She plays whatever position is empty,” French says.

Lola actually calls while I'm sitting with French on the couch in the NYLON studio, asking him about all the women he works with. French picks up and puts her on speakerphone with a cheerful hello and hearty laugh. She’s calling to run through the topics he and I are going to talk about, as he’s never really spoken about his team in an interview before. He responds, “I’m with someone who wants to say hiiiiii.” That’s me. Among other things, I ask her about her specific title, and Lola says, “Oh my god, I don’t have one... artist development is what I say. We don’t operate with titles. We’re a family.”

I guess, with us, it’s more than business, you know? I feel like, yeah, the money you need, but it’s bigger with that. When people care for you from the heart, it’s totally different than someone that’s just working for you. That’s where we all connect at. All of the relationships that you create in the business... All the relationships I’ve made are really genuine and real. That’s what I’ve found having women work with me. They care more. There’s nothing like having a team of girlfriends that are not your girlfriend. Imagine you have a relationship and you don’t argue you, you don’t have to worry about none of that, you just get to uplift each other. That’s very dope.

Admittedly, French hasn’t always worked with so many women, but he’s always maintained platonic friendships with women. He learned from a young age that having home girls is fulfilling. “There wasn’t jealousy with women friends. When you find someone that you really call bro or really call sis, that’s really dope, too.”

Despite the rumors and the way media can take any sideways glance and turn it into a full-blown affair, French doesn’t hesitate to live his life on his own terms. Following the announcement of Carmelo and La La Anthony’s divorce, French and La La were seen at the same strip club and rumors began to swirl. However, once reporters got a chance to get a word with French, he told TMZ, “That’s my best friend. She’s the Teflon queen.” In another interview, he told E! Online, “She’s a beautiful person, man, and if I was going through something she would be there for me too, you know?” He told me, “I just want to uplift somebody that’s going through something. I’ve seen her go through a lot. It’s about having somebody to support you, whatever you’re going through.”

Granted, French Montana is still French Montana, rapping about pussy poppin’ and fuckin’ in the hotel bathroom, and there’s nothing wrong with that. “I had better experiences with women as friends, not so much as girlfriends,” he says. Even so, simply because a relationship doesn't work out, doesn't mean that French is the type to have bad blood. After he dated Khloe Kardashian—a woman with four sisters and a very involved mom—he managed to maintain positive relationships with the family, so much so that Kourtney even showed love to Jungle Rules on her Instagram and called French her brother. To most men, dating a woman with a whole team of sisters may be daunting and maintaining friendships following a breakup nearly impossible, but not for French. “They’re all my sisters! Khloe, Kourtney, Kylie, they’re all my sisters. The relationship never changed with all of them.”

French also tells me about Mama Hope, the organization he donated $100,000 to in Uganda, where the video for “Unforgettable” was filmed. “It’s nonprofit organization run by women. I love them,” he says matter-of-factly. His donation has gone toward improving health care at the Suubi Health Center, and he was even able to get The Weeknd to match his donation.

He calls his decision to head to Uganda to film the video the best move in his career, which is no tiny feat, given that this is coming from a man who signed to Bad Boy Records with P. Diddy with offers on the table from Jay Z’s Roc Nation, Kanye West’s G.O.O.D. Music, and Rick Ross’ MMG imprint. Yet, when I bring it up, he insists that taking the 30-hour trip to Uganda, working with Mama Hope, and including the community in his video, beats any such accomplishments.

“Even just yesterday, somebody was showing their next video, and it was like Hawaii, beaches, pretty girls, so I just felt like to do something different, to reach something different, you have to try something new," he says. "Also, like what’s the message? How are you using your platform to benefit anyone else besides the people that are renting you the cars, the girls, the IG models? I just feel like, for me, having those kids on Jimmy Fallon and on BET stage... it means more to me that they get an opportunity.”

When I ask his favorite track, he says “Unforgettable.” Not because it’s double platinum, though, but for the story. “Going back to Africa, starting a clinic center, meeting these kids, the story of me getting the record—it’s been an unforgettable journey.”

Later in the night, I join him and his team for a friends and family viewing of a documentary he’ll be releasing covering the trip to Uganda and the making of “Unforgettable”—as well as for a shot of his new Ciroc flavor, French Vanilla. He’s the first Ciroc ambassador with his own flavor, and on the day “Unforgettable” went double platinum and the day his team got to relive their journey to Uganda together, there really isn’t any better time to toast with it.

Not everyone could be there, though. Lola checks in with French via FaceTime. He had two other interviews that day in addition to ours. “I love you. Where are you at? If you saw the documentary, you woulda cried,” he picks up and immediately starts gushing. He then flips the camera on me and says to say hi, again, and let her know that we’re still holding it down.

French had a lot to say, but it's the things he does and the way he lives his life that speak volumes. So many men who have behaved abominably toward women offer an excuse or reason to why they “aren’t really like that,” because they “love women,” were “raised by women,” and/or "have a daughter." But actions speak a lot louder than words, and it's notable that French surrounds himself with a team of powerful women, yet never feels the need to explain it, by saying something dismissive like, “Women are just more efficient.” Nor did he crack a joke about just wanting to be surrounded by beautiful women; and although they are beautiful, he didn’t objectify them in the slightest. He knows what works for him, and that’s working with the best people for the job. For French, that means professionals who invest in the people they work with, care about the people they work with, and hold down the people they work with—and the majority of them just so happen to be really incredible women.