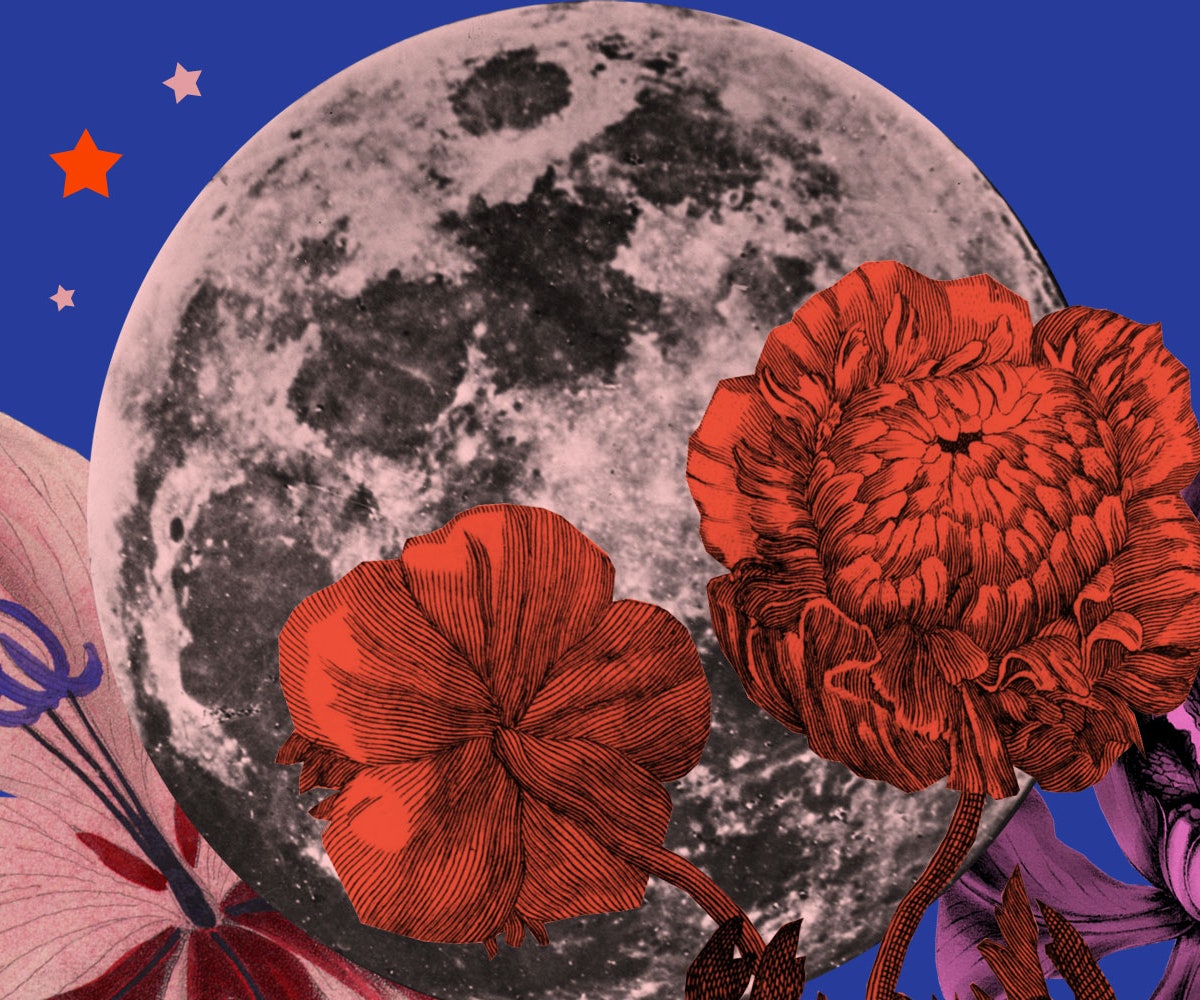 Goddess! We’re only a few months into the year and I’d venture to say that many of us are already exhausted. Well, thanks to the impending full moon in Virgo on March 12, a moon that asks us to do inner work if we want to see outer results, we can look forward to a lot less rest than we’d probably like. What kind of inner work? you might ask, questioning whether you’re up for it. Ah, but the moon has big plans for you and, whether you’re up for it or not, you’ll feel her pull.

It is vital, when thinking about the moon, to remember that she (like all powerful beings) acts in duality with the sun. With our days streaming the dreamy, wandering light of the Pisces sun and our nights under the earnest, ardent, wide-open eye of the Virgo moon, tension should come as no surprise. And, while tension isn’t inherently bad—it’s the seed of all great art and good sex, after all—it’s how we choose to respond to it that matters.

Speaking of seeds, for those of you who lean toward ritual, this is the time to recall the seeds of intention you set during the Pisces new moon at the end of February. The Virgo full moon brings those intentions back around; it asks you to release the dream and begin the blueprint. A beneficial Virgo is a person of action, attentive to the small gears that turn the big machine.

That’s where you come in, reader, and where we might venture to separate the effects of our free will from the cosmic hands of fate. Knowledge is power, said both dead philosophers and actors in '90s after-school specials; so, for you to feel empowered in the face of great astrological influence, it will do you well to know just what’s going on up there in the galaxy above you. Yes, the fact that the moon will be 22° in Virgo (that’s Decan 3) is important. What’s also important, however, is the way the Virgo moon will rise in close alignment with the star Denebola, during a Venus retrograde, while Saturn is in Sagittarius, while Jupiter is opposite Uranus, and Chiron and the sun work it out in Pisces. Basically, a veritable smorgasbord of interplanetary vibes.

Let’s talk about Virgo, baby (how it is and how it should be). As I mentioned earlier, Virgo at her most beneficent gets the job done. She’s the one you call when you need a kickass organizer and a stealth accomplice—basically, when you’re ready to set it off. That’s because Virgo deals in hierarchies of needs and one thing every good mission requires is a strategic action plan that puts things in order from “absolutely imperative” to “fuck it, lets skip that part.” Virgo loves being called upon to help because she loves to be of service and she loves when the people she admires feel taken care of by her. This kind of nurturance and devotion gives her purpose and a place in the world.

There’s a downside, of course, because Virgo has a duality. When Virgo is in her detriment—whether it’s due to the planets around her bringing on some bad vibes or what I’d like to call “environmental factors” (traumatizing childhood, unfulfilling relationship, lack of purpose) Virgo’s acts of service become heavily entwined with feelings of resentment. This can lead to toxic codependent relationship structures and various other sorts of manipulative behavior.

“Well, I’m not a Virgo,” you non-Virgos out there might say, “so, what’s this got to do with me?” Because, Earthlings, we only get one moon on this here planet and where it’s stationed is important to every sign on the zodiac wheel. The Virgo moon reminds us that we are all connected and there is a little bit, if not a lot, of Virgo in each of our heavenly bodies—even if we don’t see Virgo in our charts.

Given that so much of Virgo’s emotional wrangling comes from love via acts of service versus codependence via lack of boundaries, it follows that this full moon is all about mindfully observing our relationships and the roles we play in them, paying close attention to the places where we have allowed resentments to fester due to unclear expectations or boundaries. And, in case you’re afraid it’s a total downer, the full moon is also about celebrating the pleasures and moments of beauty we’ve begun to take for granted, abundance—baby—take note. What the Virgo full moon sure doesn’t want you to do is recline into familiar patterns of discontent and criticize your partners and friends while all the while doing nothing to investigate what part you play in the problem. In fact, due to the Moon’s placement in Virgo’s 3rd Decan, you might find that the more you resist self-interrogation (note: this is not the same thing as defeatist self-shaming, quite the opposite), the more your physical body will bear the brunt of your psychic blockage. That’s right, we’re talking physical breakdown, illness, and immune issues. Or, as that shadowy bard of Lesbos named Sappho allegedly said, “What cannot be said will be wept.”

Why the strong focus on relationships? Well, for starters, Virgo is a mutable sign. That means, when Virgo feels herself within a flourishing community, when love pours around her, love pours from her. Her dreams and her private interior, although not always so predictable, are heavily dependent on the relationships in her life. For another thing, as I mentioned earlier, Venus retrogrades in Pisces this month (good heavens the potential for drama is high) and any time a planet retrogrades, it’s a good time to reflect, honor past commitments, build up your resources. Generally avoid getting into trouble. Mercury retrograde has been a popular concept in pop astrology, with everyone warned to back up their data and avoid new travel plans because Mercury is the god of information. Well, when Venus is in retrograde, love means never having to say “here’s another problem I’m not willing to let go.” Love becomes a place of generosity, of seeing your partner in their best light even if they don’t know how to stand in it. Love is about honoring what you’ve been doing right together or about taking some time alone to change the only thing you’ve got the power to change—yourself.

In addition, the moon’s station in Virgo so close to the fixed star Denebola only highlights the tension between self-improvement and self-sabotage. Denebola is Venusian in nature, a star that promises blooms if you know how to tend the ground. What I mean is, Denebola is that kind of star that brings brilliance or ruin and leaves it up to you (actions speak louder than words here) to see which one you deserve.

What if you don’t have a partner? What If the relationship you’re most in need of rectifying is the one you have with yourself? Never fear, the moon’s got homework for you too. For starters, all of us need to work on our relationship with ourselves. Having said that, stubborn old Saturn in Sagittarius has been plugging away at the labor of self-improvement (Sagittarius, Capricorn, Scorpio, Taurus, can you feel me?) for quite some time, making some of us wonder whether we were born to define what work is before we’re even allowed to do it. Now in conflict with the moon’s station in Virgo, Saturn is keen to up the ante, filling our moments of much needed reflective solitude with nervous, anxious, and—yes—sexual energy that needs somewhere to go.

Well, if you can’t fuck, then clean; that’s what I always say, anyway. That way, when you finally get a moment to celebrate your relationship (your “I just met you tonight” relationship), at least you’ll have clean towels and a dust-less nightstand. Which brings me to another warning about the moon in Virgo when Venus is in retrograde, this isn’t the time to risk everything for love—especially not the kind of love you feel the first time someone’s glance sets fire to your heart. Jupiter opposite Uranus might inspire you to take some big risks in the name of independence and lust but do yourself a favor and save the fire for the upcoming month of Aries. Fire is the most fun way to play with fire, after all.

Finally, Chiron, the wounded healer, has been hanging out in Pisces forever. So long that Pisces probably can’t remember a time when Chiron’s influence didn’t feature heavily into their lives. With the Sun in Pisces acting as the Virgo moon’s dual nature, it’s important not to forget Chiron’s power. Chiron, on his own, teaches us how to surrender, how to use our pain and subsequent healing as a tool. Under the difficult auspices of Chiron, Pisces everywhere have spent over a decade learning that it is their task as survivors to turn their tragedies into stories of triumph and empowerment. Either that, or watch those same tragedies return to them again and again in new forms of despair. Chiron is a shadow teacher and in Pisces, these lessons take on a dream-like nature, a propensity toward mystic visions or haunting nightmares. With the moon in Virgo, you might find yourself wound-dwelling, circling in on your deepest scars and wondering who to blame for how raw they feel. Try to remember that all scars feel raw in bad weather, that weather is cyclical and the ache you feel is inevitable. The only tongue responsible for licking your wounds is your own. Any other tongue you allow on your body is a gorgeous gift. Treat it accordingly or turn it away forever.