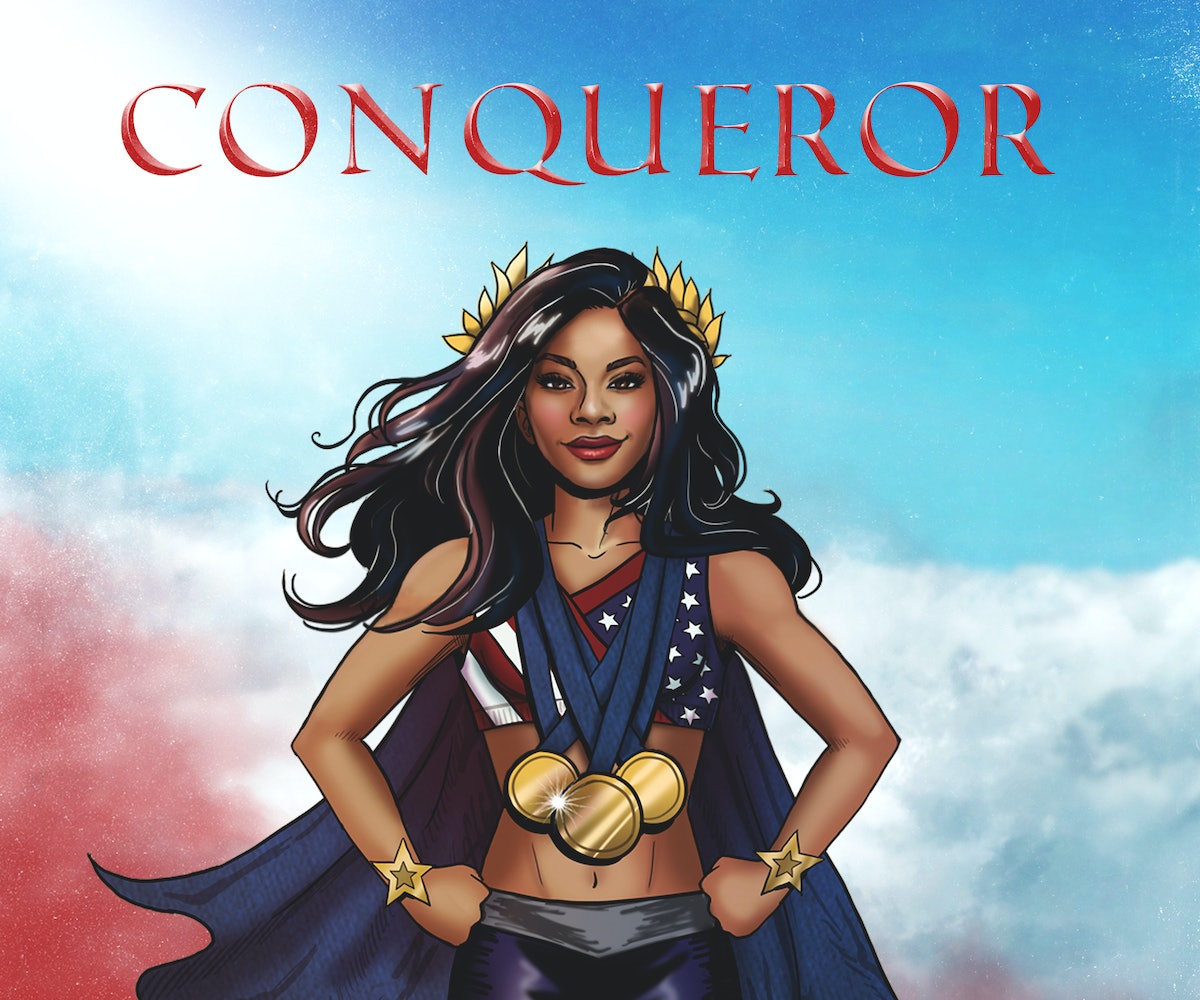 During the Olympics, we constantly found ourselves wondering what the athletes listened to right before they went on. I mean, wouldn't you want to listen to a soundtrack that gets one in the zone to win gold? Well, now you can. And not just anybody's playlist either. Gold medal-winning gymnast Gabby Douglas has just released Conqueror, her first ever music compilation that she made in collaboration with Heard Well. The 21-year-old gymnast has personally selected 12 tracks that get her ready to achieve her goals, and that she hopes will also motivate others.

We recently caught up with Douglas to learn more about the steps it took to create her latest project. Conqueror is available to purchase now on iTunes and Heard Well. Channel your inner conqueror and learn more about how the compilation came together in the interview, below.

How did you get involved with Heard Well on this compilation?

Well, number one, I was just really excited for

to leak, and I thought it'd be so beneficial for other people to really listen [to] because that's a helpful album that I personally listen to when training. Anything that I do is mostly not only for me but for other people to benefit from. It was just so fun to create this album. It definitely gets me motivated and hyped up, so hopefully, others will feel the same and feed off the positive music and just enjoy the album.

How did you go about choosing the artists that are featured on this?

Well, these artists I've been listening to for quite some time, and they really motivate me in a way that's so powerful. I mean, it's not only talking about one thing, but it's talking about something deeper. One of my favorite songs personally on the album

is "Not Backing Down." I was listening to it every single day. Literally, every single day. There's this rap section, and it's amazing. I listen to it at every competition, and I definitely recommend you check out the lyrics. [They] are just amazing and motivating, and it's very positive.

What does the word "conqueror" mean to you?

It means so much to me. Me and my mom and the people from Heard Well, we went back and forth like, "What should we name it?" Me and my mom were just talking about names, and we thought "conqueror" is the perfect name because of what I had to overcome, all the challenges. There's good, there's bad, [but] you still give it your all and you still finish and you don't quit your project. "Conqueror" is something so powerful and it goes beyond that word. It's basically my whole life, and also my mom's. My family has just been conquering giants since we were young.

What keeps you going despite all the pressure that you have to deal with?

Olympics. So you have to set different goals and take baby steps until you meet that goal. Like, what do you want to achieve today or daily or weekly or in a month? So set goals for yourself and then go out and achieve them.

How do you feel about being put in the position of being a role model on a national level?

It feels amazing that people look up to me and also look up to my story and really feed off that positive energy. I'm honored and grateful for the support and love that people have, and that they have been supportive of me and my family. So, one, it's just an amazing feeling. And two, I don't look at it as a responsibility. I mean, there's certain things that I don't post because many people can take that the wrong way, so it is a little bit of a responsibility, but I also love sharing my story [and] helping different people. I'm one of those people that loves giving gifts; even though I like receiving gifts, I feel much more joy in other people's joy, you know? I love talking to other people, sharing my story, giving them different advice and tips.

I have some stuff coming out, some stuff in the works, so I'm really excited for all of that to come. Right now, I'm taking a little bit of a break from gymnastics. After the Olympics is hard not only physically, but mentally. Everyone takes a break after the Olympics, it's normal. I'm also a guest star on the new show on Nickelodeon called

It was really fun, I was the head munchkin of the Gold Medal Girls. I mean, I don't think that I want to pursue [acting] further down the road, but we'll see. I have different, fun opportunities and media chances, so right now I'm just taking it day by day and step by step.

I think it's really awesome that you're pursuing all these different interests and passions of yours.