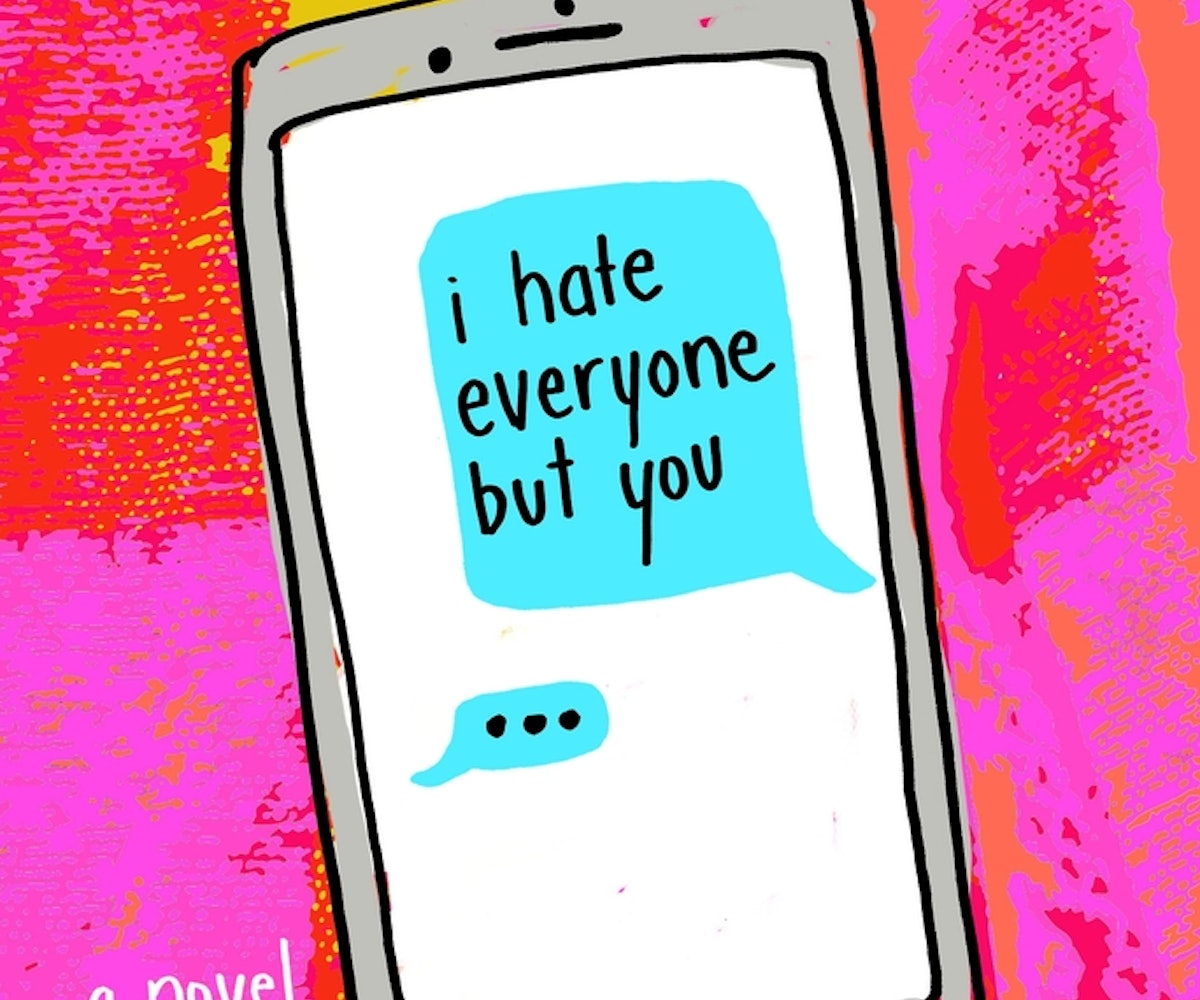 Even if you don’t regularly watch Gaby Dunn and Allison Raskin’s YouTube videos, you’d assume they were best friends after talking with them for just five minutes. They play off of each other’s jokes, their natural banter has a way of making you feel like you shouldn’t be listening in, and they make fun of each other in front of complete strangers. You know, typical best friend behavior.

That same relationship, which has more than 750K YouTube subscribers, is now on paper for their new YA novel, I Hate Everyone But You. Well, sort of. The book is loosely based on Dunn's and Raskin’s college experiences—though which parts are fact and which are fiction you’ll have to figure out yourself. It follows Ava and Gen, two best friends navigating their first semester at college on opposite sides of the country. Through text messages and emails, the book tackles things like heartbreak, self-discovery, losing your virginity for the first time, coming out, mental health, and polyamory. Not your typical YA novel one might say. But Generation Z isn’t your typical generation, either.

Dunn and Raskin tell me they chose to write a YA novel because teenagers, the ones now expected to change the world, are whom they wanted to be speaking to. “I think that it’s a really good growth time, and if you can get through to them at that age, you can really shape what they become,” Dunn says.

Ahead, we chat with both Dunn and Raskin about why queer content is so important for young people, the work that goes into maintaining a friendship, and how writing a book has turned them “increasingly fake.”

You guys are best friends in real life, but having two people write one book seems a little difficult. What was that process like?

Allison Raskin: We just sat next to each other, nine to five, three days a week. I typed the whole book while Gaby sat next to me, we ate a lot of candy and listened to a lot of music.

AR: Yeah, it was good times.

It's very much based on both of your own experiences; what kind of boundaries did either of you create for yourself in terms of what you would and wouldn't include?

AR: Well, it's fiction, so honestly there were no boundaries. If anything, we want to be able to deny and say we totally made that up. I think that's maybe some of the fun for the fans who know us, to decipher what's new and what actually happened.

GD: We took a lot from our real lives—we took a lot of actual experiences and tried to condense them down to happen in one semester. So, if anyone wants to go back, [they can] find the actual article that I wrote about a dean committing sexual harassment because that really happened. If anyone wants to find Gen's real article, it's a deep cut from the Gaby Dunn Library.

How was it revisiting freshman year of college? It can be a roller coaster for a lot of people.

AR: I think it was such a relief to be an adult. I never wanted to go back in time. I think that that's like the mythology often, that college is often the best time of your life, and I really wanted to make a book where that wasn't the case and where that was okay.

GD: Yeah, I mean I was sort of a fuck-up in the beginning. I partied too much and I hung out with people a lot of whom later dropped out. I took up smoking cigs. I was like, "I'm free for the first time, I'm gonna do all the adult things I want." And so, it was fun to go back and be like, "Oh yeah, you didn't know anything, here's a depiction of that!"

In the book, there's a transgender character and you touch on LGBT and mental health issues. You guys obviously bring these topics up a lot on your YouTube channel also, but why was bringing them up in the book important to the both of you?

GD: I think there's this weird misconception right now, that queer content isn't for young people. My friend Lindsey Amer runs a channel called "Queer Kids Stuff," which is like a Sesame Street and for kids, and people go crazy on her for that, they're, like, so furious [for introducing queerness to children]. But we tell babies, "Oh, that's your girlfriend," or, "Oh, this baby's such a flirt." It's not like we don't teach kids heterosexuality. So I think there's this weird thing, where we're like, "Oh, we gotta keep the queer content away from the kids," but kids know, teenagers know, they're very sure of themselves now. They're very interested in sexuality, so I wanted to depict 18-year-olds who already are interested in that about themselves. Where Alex has already transitioned, and that's not a huge factor in his story line in the book. Gen's coming out, but she's still super-happy about it and is excited to be bisexual. I think that was important because I didn't want to talk down to young people who already know this.

AR: I think a large part of what we enjoy doing on the channel is normalizing stuff that potentially hasn't been completely normalized yet, but if we treat it like it's no big deal, then it becomes no big deal. That was definitely a big approach to some mental health stuff in the book.

It's so strange that people are uncomfortable with exploring this topic with younger generations because I feel like Gen Z is probably the most woke of the generations.

AR: I've always said that this generation is our only hope.

It's true, they have a lot riding on them.

AR: Yeah, if the world survives long enough for them to take over.

So, another aspect of the book that I really like is that the characters argue. There's a lot of love, but there's also a lot of telling it like it is. Ava says a lot in the book that she refuses to be a yes woman to Gen. Why was that important to show the highs and lows of friendship, and did you pull from any of the arguments that you guys have had in real life?

GD: Oh, we had a huge fight while writing this book, and we just put it in the book! We had a massive fight in the middle of writing it, that was like, it came from weak plays on both sides but… I think there was stuff that came from good places, and that's where the characters are coming from; they love each other. It's less mad and more sad that they're not seeing eye to eye.

What do you guys hope that younger generations, or whoever is reading this book, take away from it?

AR: Friendship should be an important part of real life—it should be a priority—and who you are now doesn't dictate who you are in the future. There's so much room for growth and both characters change so much in the course of one semester, just imagine what they'll be like at the end of the college experience. And hopefully, you'll find out, because it'll become a best-seller and we'll get to write a sequel.

Gaby, I listen to your podcast Bad with Money, do you guys have a plan in place for how you're going to manage your first big check from book sales?

GD: Well, the personal proceeds that we're making from the tour are going to Hurricane Harvey relief, that's what we decided to do. So, that is good and bad with money? We thought that was the right thing to do, considering how disastrous and devastating it's been. Also, it was a great opportunity for me to learn what a retirement [fund] was, and to actually put stuff away for retirement. So that's mostly what I've been doing. I don't wanna seem like a saint, I also bought a lot of suits... oh yeah, and sneakers. I became a sneakerhead.

AR: I started getting fake eyelashes? Cause that feels like the real me?

AR: Yeah, that's what is happening. I pay for a trainer now, I have fake nails, I don't know what's going on! I was saying, like, no one is beautiful, people are just rich.

GD: Yeah! Dolly Parton says, "Ain't no such thing as a natural beauty."

I Hate Everyone But You is available for purchase now.