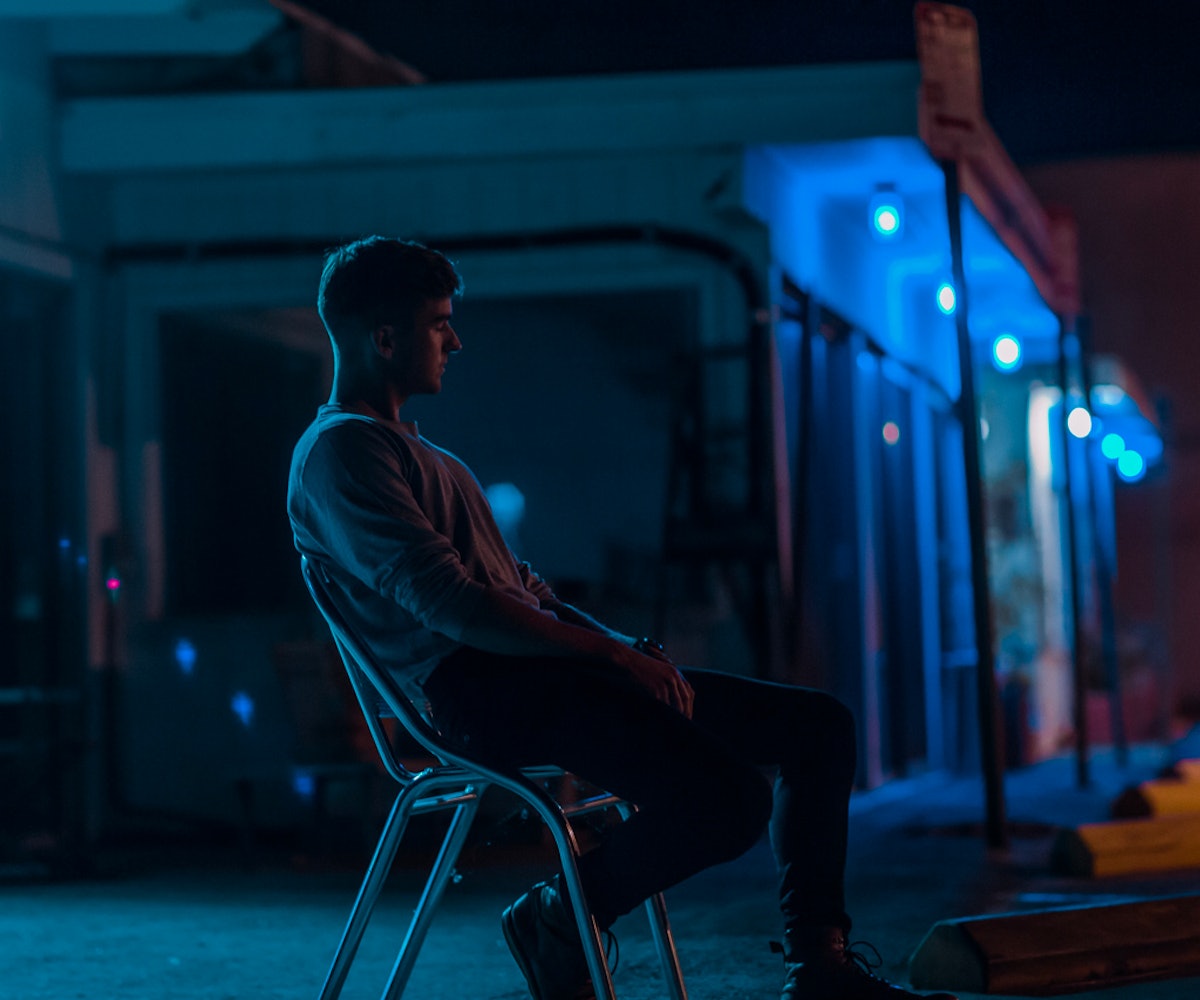 The world of electronic music is a world of infinite possibility. There's nothing an artist can't turn into melody. Voice, however, remains one of the strongest and versatile instruments there is. Learning to harness it and manipulate it is a skill reserved for a talented few. For L.A.-based Danish artist Galimatias, the voice is a platform for creating some of the lushest songs out there today.

A first listen to "Let Me Know," Galimatias' latest, will likely leave you thinking he employed synths and keys. He didn't. It's layers of his own voice and beatboxing spun through a vocoder, chopped up and screwed around with. Talk about innovative. It's a slick, confident mesh of R&B and electronic influences that come together for a brilliant three-and-a-half minutes. Galimatias has swagger that's worth listening to on repeat. Learn more about him in our interview, below.

The Urban Flora EP. It just turned two years old recently, but there are even more people listening to it now than when it came out. It's amazing that it's still growing. I think what people find so appealing about the release is how genuine it feels. There's a lot of these Top 40 kind of albums coming out where you look at the credits, and there's like 30 different writers, producers, mixing, and mastering engineers etc. With Urban Flora, it was just two people, and I think that creates a different kind of intimacy that you don't normally find. When you listen to the record, it feels very consistent, like it's one story from beginning to end because everything came straight from us. It's like we truly own this story. And I don't mean own as in legal terms of copyright and percentages; I mean own it as in we created it, from the bottom up. It is as genuine and unfiltered as it gets, every single word and sound. Things have already changed so much, it won't be like that again. But that just gives me more the reason to cherish it.

I'd generally prefer not to have a roommate, but if I have to pick one, I'd say Isaac Newton. That man discovered so many things, I feel like I'd always be motivated to push myself further if he was around. Imagine coming home like, "Hey Isaac, what have you been up to today?" "Oh, not much. I just finished my book defining the laws of motion and universal gravity. How about you?"

Soul and jazz from the '60s and '70s. Names like Marvin Gaye, Stan Getz, The Temptations, The Manhattans, The Isley Brothers, Barbara Mason, etc.

I would never emulate anyone. I remember Neil deGrasse Tyson in an interview saying all the "greats" were never versions of someone else. And what he meant was, you cannot become the greatest of anything if you try to be someone else. Because how could you? That person is already what you want to be. You have to figure out what is unique about you and then develop that. That's what I'm trying to do. I think this is the most important aspect to understand when trying to develop yourself as an artist. Don't look at others, look at yourself and find what that separates you from them. There's a lot of people I admire and respect, but I don't idolize anyone.

At home, at night, with headphones on.

I'd like to experience the emergence of jazz when African rhythm merged with Western classical instrumentation. I guess that would lead me to New Orleans somewhere in the beginning of the 20th century.

These days, I like watching the Joe Rogan podcast on YouTube. They are long-form conversations where Joe Rogan just talks to people he finds interesting. It could be anybody from neuroscientists to a movie director to an astrophysicist. It's always fascinating to just observe somebody else elaborate on their passion. Practically any subject can be interesting if it's communicated with passion. I guess it depends on the person, but you learn a lot when you just listen and really immerse yourself. It can easily be more engaging than watching a movie.

Big Magic. It's a book that has a really naive perspective on the creative process, and sometimes that's just what you need. I'm very much a perfectionist, so I tend to spend too long changing and tweaking every single detail in my music, and this pulls me in the opposite direction—kind of easing the pressure off my own expectations.

I never went to high school. In Denmark, the school system is quite different. You go to elementary school from grade 0 to 9, then you pick from a range of different schools next depending on what you want to do. I definitely went through a bunch of phases. I'm 25 now. I was already making music when I was 14, but nobody else in my class did until this funky new rapper kid moved in from Copenhagen. We became best friends for a few years until our ways separated. I remember when we were around 15, we would have these house parties where I played the piano while my friend would do freestyle rapping over my chords. It was like we started a genuine interest in music among the others in the class. I remember how suddenly a lot of them started taking interest in freestyle rapping, and then music slowly became a thing in our small countryside villages. We started making our own songs. My best friend wrote a whole track for me on my birthday, and it was actually the best birthday present I've ever received. I clearly remember he sent it to me late at night on my birthday and as I listened to it, I was laughing so hard but trying to conceal it because I didn't want to wake up the rest of the house. My mom woke up and barged into my room because she actually thought I was having a seizure.

I think I'm a pretty fast learner. I've realized that if there's something I am truly curious about, I can learn it. And that goes for anything because you will get better at anything you practice.

I think people would be surprised to find out how much football [soccer] I play. I can genuinely feel myself get happier after playing. There's something about being absolutely immersed in a physical activity. It's not the same as running or working out in the gym for me. When I play football, I am 100 percent there in the present moment. I think everybody needs to have an outlet like that because we are chased out of bed by our own thoughts and we keep thinking and thinking and thinking until we go to sleep. Sometimes you just need a break from all the thinking and do something where you are forced to be so engaged that you can't even think about anything else, something that pulls you straight out of conscious thought. I feel like it makes me more creative afterward, too. It conditions my brain.

My current project. I'm working on my own music only right now. An EP or album will come, but not yet. Right now I'm just working on tracks and releasing them as I finish. It's very liberating, also because there's no pressure from a label. I've got a very dedicated manager and a cool team working with me, so we just release it independently. For the music itself, I'd say it falls somewhere between hip-hop, R&B, and electronic. I guess I'd be defined as an electronic artist, but the funny thing is I don't really listen that much to electronic music. I'm generally more into hip-hop and R&B. In that regard, I've started to work a lot more with my own voice, and not necessarily just as the lead vocal but also as an instrument. The human voice is the most versatile instrument there is, so it's very inspiring for me to explore it and especially to extract something new out of it. On "Let Me Know," everything up until the chorus, except the sub bass, is made from my own voice. All the rhythmical content is different layers of me beatboxing through vocoders, generating harmonic content that also serves as rhythm through the track.

I feel like innovation is a vital part to human nature. We want to progress in every aspect of life, not just technology. So while The Beatles, Michael Jackson, and Marvin Gaye are all amazing artists, we don't want somebody to copy their styles today. We want something new. We want to be surprised. That's why I'm always trying to push the boundaries of my music, and it's generally expressed through the sound design. One of my next tracks has a main melody made out of a recording of a squeaky plastic cassette, but you would never notice 'cause the final sound is very organic. It almost sounds like an animal. But that's what I love when I listen to music, the unique sounds. Like, when you come across some sound that you just can't define, it gets ahold of your imagination. Usually, I try to make sure there is at least one sound in every one of my tracks that nobody has heard before.

I think the phrase "You aren't the center of the universe" is bullshit. I am truly the center of the universe in my perspective, just like you are the center in yours. Like I said earlier, the only way to measure the success of your life is to recognize what makes you happy. And it's okay to be selfish sometimes and prioritize that. It's also okay if you haven't found the thing that makes you happy yet, but that means you have to keep actively searching for it. You can't just sit back on your couch and watch TV all day if you don't know what makes you happy yet. You've got to follow your curiosity, and then you'll find it eventually.