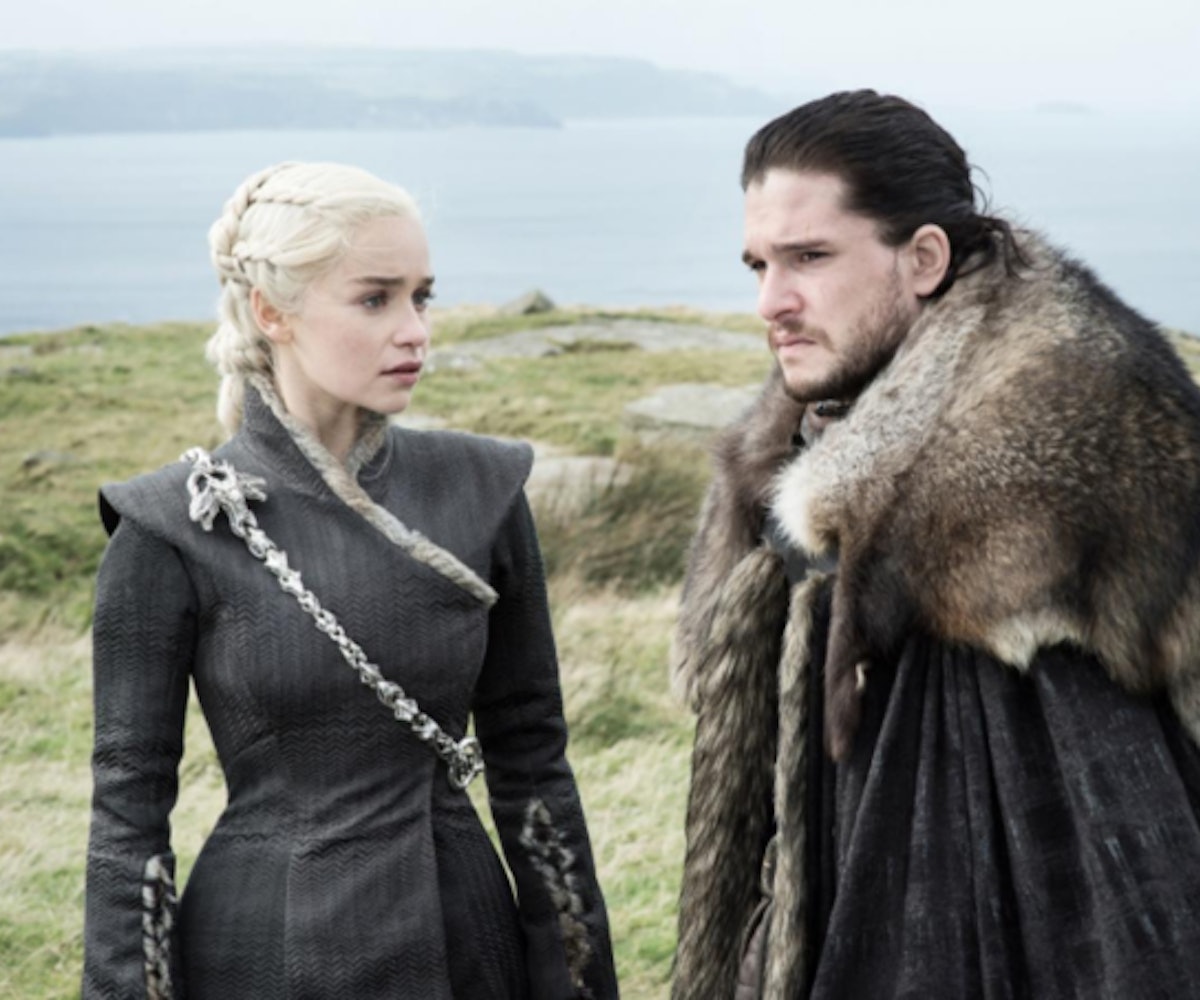 Last week, Ira Madison III, who both writes for the Daily Beast and is the best person on Twitter, wrote that Game of Thrones is "actually a soap and not a drama." Madison's assertion undoubtedly ruffled a few GoT fans' feathers, because the hugely popular series is often held up as an example of Peak TV, and talked about in the same breath as shows like The Wire, Mad Men, and Twin Peaks. Other than sharing an air time on Sunday nights, Game of Thrones doesn't have anywhere near the nuance or character development of those shows; it doesn't subvert archetypes, it reinforces them. (The fact that a woman can be fierce and fearless in a leadership role is not a subversion merely because it isn't done enough.) In truth, the show's most subversive element is that it has employed soap opera tropes—sudden deaths of main characters! unlikely revivals of those dead main characters! surprise pregnancies! mistaken identities! murder plots! twins!—but presented them in a way that screams "prestige," by casting incredible actors, shooting in sumptuous locations, and spending tons of money to make dragons and zombies look like real, living (or not-so-living, as the case may be) beings. (What happened with the wig budget, we'll never know.)

For any GoT watchers who still doubt that the show is just a soap opera with direwolves, "Eastwatch" will clear away those doubts and prove that, yes, this is the soapiest thing currently on TV, but that's just fine—in fact, that's why it's as compelling as it is. We wouldn't change a thing.

And kicking off the episode is the main reason why we appreciate GoT's refusal to care about the way the world works when it comes to basic things, like the fact that a man who falls into a river wearing a heavy suit of armor would definitely drown, rather than swim downriver in said suit of armor and climb onto a friendly river bank without much trouble at all. But because this man is Jaime Lannister, and because we're still eager for him to kill Cersei in the same way he killed another mad regent, we're okay with his survival. (Also, he's very pretty to look at. So...)

Even though we're well away from the point where Jaime may (or may not, I'll get to that) kill his beloved sister, there's still plenty for Jaime to do this episode. First, he must head back to King's Landing and tell Cersei that they have absolutely no hope of winning the war against Daenerys, because she has a dragon and Dothraki and, oh, also, more dragons. Cersei is like, okay, then we will die. So that was a good talk. Another good talk Jaime has is with Tyrion, who has traveled with Davos at the speed of light to King's Landing in order to tell Jaime that the real battle is the one between the living and the dead and that Jaime and Cersei would do well to pay attention to that. Jaime takes this news to Cersei, who already knows about it because she knows everything (also because Bronn is a snitch, it seems), and then Jaime receives some news of his own: Cersei is pregnant with another twincest baby. Because Jaime still loves her and because Cersei promises to tell the world that the baby is a product of twincest, all seems right in the world between the lions of Lannister. Like, maybe those crazy kids will make it work! Except, of course, they won't, because Cersei immediately follows up her announcement by threatening Jaime not to ever betray her again. Threats between lovers? That never ends well.

Something that did end well, however, was Gendry's endless rowing away from the clutches of king's blood-thirsty Melisandre wayyyy back in Season 3. Did you forget about Gendry? Well, Davos didn't, because Davos is the best. So while Tyrion is bro-ing down with Jaime, Davos finds Gendry in the blacksmith's shop and is all, "Come with me!" And Gendry is like, "I will! Let me bring my massive war hammer, one reminiscent of the kind my father used in battle to kill Rhaegar Targaryen!" And if you have any doubt about whether or not Gendry can swing that thing, don't! Because he can. He almost immediately kills two Gold Cloaks who never had a chance to poke holes in their chainmail thanks to all the fermented crab they'd just consumed.

But what purpose will Gendry serve on Dragonstone, where he returns with Davos and Tyrion? He will join up with Jon Snow, his fellow bastard (or, you know, not), as Snow goes with Davos and Jorah Mormont (who is back with his beloved Dany, even though he quickly realizes that Khaleesi now has eyes for Jon Snow) up north, where they join up with Tormund, the Hound, Thoros, and Beric Dondarrion to go beyond the Wall where they will attempt to capture a zombie from the Night King's Army of the Dead. Good luck with that!

They will really need it because, as we see when Bran inhabits the body of a raven and flies past the Wall, the Army of the Dead is huge and intimidating. Also intimidating, though not as huge? Littlefinger. He's been lurking around Winterfell, definitely up to no good. He's not gone unnoticed though, because Arya has been trailing him, and even breaks into his room to investigate what he's been up to. It turns out, Littlefinger is in possession of the letter Sansa sent to Robb and Catelyn, wayyyyy back in Season 1, in which she wrote asking her brother to pledge his allegiance to Joffrey, as their father had been labeled a traitor. Now, Sansa had to write that letter under duress from Cersei. And Robb didn't heed it. But Arya undoubtedly only sees this as an indication that Sansa has always been willing to sacrifice family for her own rise to power, finding further proof of this in the way Sansa has been dealing with the northern lords while Jon is away. Things don't look good for the relationship between the Stark sisters; they look chaotic, in fact. And who do we see smirking in the shadows as he plans his ascent up this particular ladder of chaos? Littlefinger, of course, who planned the whole thing. It's just a reminder that Arya is used to defeating her enemies lately with her skill and strength, but she is going to need to use a different tactic to defeat Littlefinger.

Speaking of defeat: Say goodbye to one of the least sympathetic characters ever on GoT, Randyll Tarly. He and his son were burned to death by Drogon for refusing to bend the knee to Daenerys. Tarly lived as he died, a stubborn and xenophobic fool with strange loyalties. But there was something about the way Dany killed the Tarlys that really bothered Tyrion and Varys; it had none of the decency of regular warfare, apparently. And, look, I get it. Dany's constant "bend the knee" talk is wearing on me too, but this is war. She needs loyalty. Every main character has, at this point, killed those who were traitorous or otherwise evil or even simply just in their way, and we don't hate Arya or Jon or Brienne, do we? No, we don't. We just have a problem with young women rulers demonstrating just how powerful they are. And Dany, with her dragons, is the most powerful of all.

But it might be a power that is not hers alone, as we see when she arrives home on Drogon and is greeted by Jon, who clearly is fearless when it comes to confronting the living embodiment of fire. Dany is definitely curious about Jon's ability to stand in front of Drogon and stroke his nose; it's something she's never seen. (She didn't see Tyrion similarly unchain Viserion and Rhaegal a while back.) Could this mean that Dany is not the only one with dragon aka Targaryen blood? Um, yes, duh. Obviously.

And if we needed any more proof, Gilly finds a passage in one of the crumbly old Citadel history books about how Prince Rhaegar annulled his marriage in Dorne in order to marry another woman. Gilly reads it out loud to Sam, but he's too busy feeling unappreciated by the maesters, and so he ignores this incredibly important plot point and just sets about stealing scrolls to take with him and Gilly and baby Sam as they plan their escape from Oldtown. But in case you don't know what this annulment means, I will tell you: It means Jon Snow is the legitimate son of Rhaegar Targaryen and Lyanna Stark, not a bastard at all, and so not only has dragon blood but also has a better claim to the throne than his aunt Daenerys.

This episode had a ton of plot reveals and not that much action, but it's setting up for so much good stuff to happen in the remaining two episodes of the season. Like, a Sansa and Arya showdown! And a Littlefinger and Arya showdown! And a White Walkers and Jon Snow and co. showdown! And maybe Cersei will give birth! Except, wasn't the prophecy that she would only have three children? Wouldn't this ruin the prophecy? Unless... wasn't the other prophecy that the "valonquar" (little brother) would kill her? And haven't we always thought that meant Jaime? (Even if Cersei thinks it means Tyrion?) But what if the "little brother" is actually... this baby? Who is the little brother of her other children? And so Cersei dies that way?? SO. MANY QUESTIONS. Just like in a soap opera. What's not to love?

NEXT UP
Fashion
Target’s Future Collective Gets Buoyant With Gabriella Karefa-Johnson
Entertainment
19 Niche Music Festivals For Every Type Of Person
Entertainment
Boygenius, LCD Soundsystem & Steve Lacy Are Headlining A Summer Concert Series
Entertainment
Chloe's "Pray It Away" & 9 Other New Songs Out This Week
Style + Culture, delivered straight to your inbox.