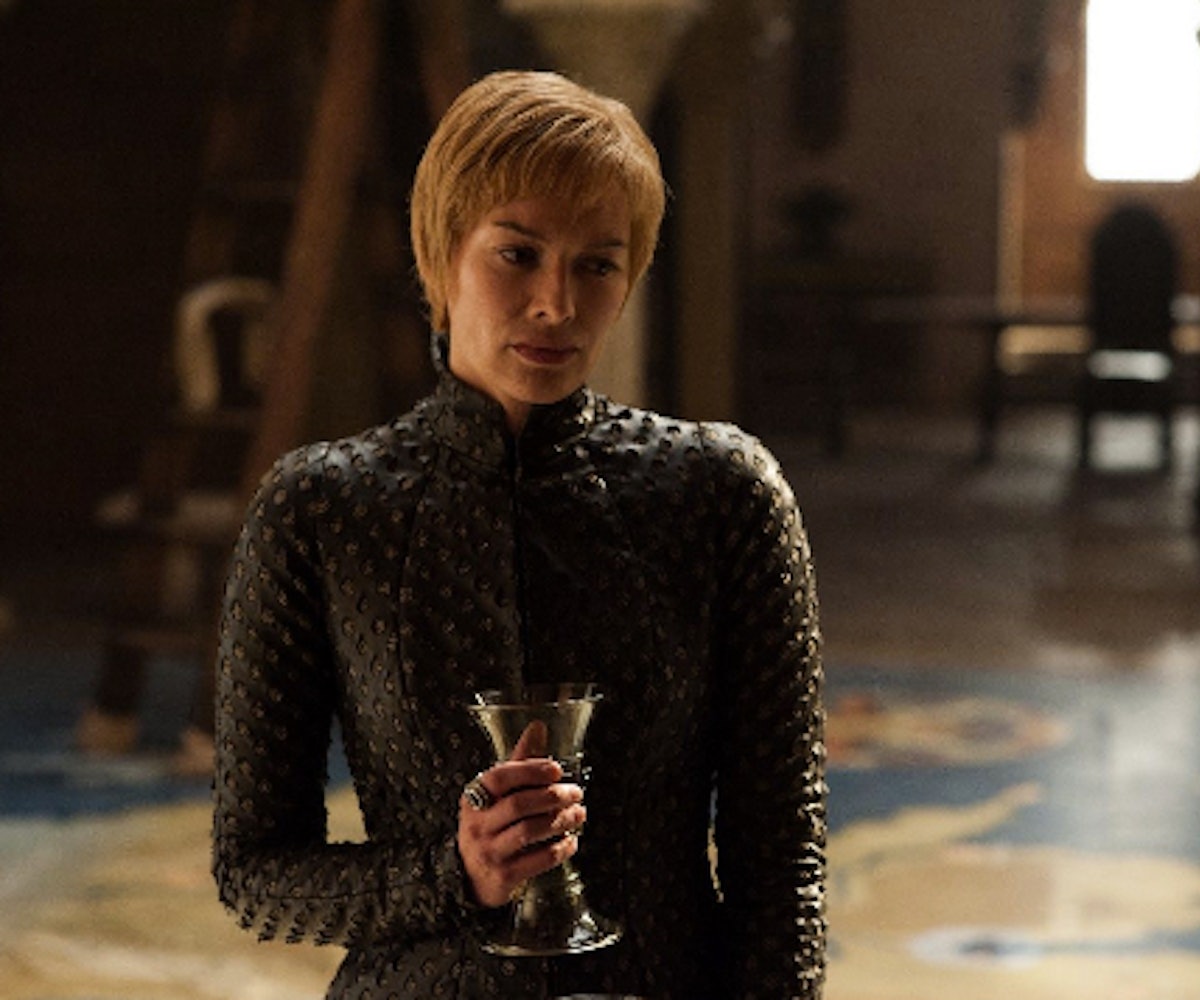 If you, like me, recently rewatched the opening scene of the Game of Thrones Season 6 finale, you'd have been prepared for anything offered as part of the Season 7 premiere to be underwhelming. After all, the gorgeously paced montage, in which Cersei handily dispatches with a huge swath of her enemies (as well as hundreds, if not thousands, of innocent bystanders, not to mention her last remaining child) in a phosphorescent green cloud of wildfire, was instantly iconic. It inspired dread and awe; it solidified Cersei's position in this particular game. She is someone to be feared and reviled—or maybe a little bit admired for her absolute commitment to maintaining her position of power in a world that seeks to bring her down. What could possibly top that? Well!

The penultimate season of Game of Thrones kicked off with a scene that served as a tidy parallel to that fabled Cersei-centered opener. Another family was virtually wiped out; revenge was doled out in a smile-inducingly satisfactory way; a woman's bloodlust was further satisfied. Only, in this case, it wasn't an evil Lannister doing the killing. It was one of our heroes: Arya Stark.

When last we left Arya, she had assumed the guise of a serving girl in order to seek vengeance on the late Walder Frey, who had supervised the infamous Red Wedding massacre of Arya's mother, Catelyn; her brother, King Robb, and his direwolf, Grey Wind; Robb's pregnant wife, Talisa; and scores upon scores of Stark supporters. Walder Frey had thus earned a place on Arya's Kill List (which is getting shorter and shorter), and it only made sense that once Arya obtained her face-shifting abilities that she would use them to start knocking off people on that list. And what better place to start than with nonagenarian Walder Frey?

But, of course, as Arya well knows, it does little good to cut off a serpent's head if another one will just grow back in its place. And so we open onto a dining hall filled with Frey men—and only men—with old Walder looking down, seemingly benevolently over them all. But wait? Isn't Walder dead? Yes, obviously. That's not Walder, that's Arya. And the reality of this grows more and more clear, even to those idiot Freys as they sip their poisoned wine and listen to their patriarch mock the bravery they showed by slaughtering a young woman, heavy with child, and a mother of five. Arya Stark has proven that not only does the North most definitely remember, as she tells the trembling young (and I do mean young) widow of Walder Frey, but also that winter has come for House Frey—and it's coming for all enemies of the Starks. *Cue shivering*

It's hard to say if this scene was supposed to be evocative of the mass murder committed by Cersei last season, but Arya's bloodlust has always carried an uncomfortable similarity to that of her sworn enemy. Now, though, it seems another Stark sister has also picked up some lessons from the new Queen of Westeros. Following an uneasy and very public confrontation with Jon Snow, now King of the North, about whether or not the children of a family should be punished for the sins of their fathers (Jon chooses leniency, Sansa seeks revenge), Sansa and Jon talk about the existential threats they currently face. While Jon stresses that the Night King and his zombie army are more pressing, thanks to the fact that, you know, it's a literal coalition of the undead (whose numbers include, as we see, towering giants with those telltale glowing blue eyes), Sansa warns Jon not to sleep on Cersei, pointing out that the Mad Queen is ruthless, and has killed all those who cross her. Jon notes that Sansa is talking of Cersei in a tone approaching admiration, and Sansa doesn't disagree, saying, "I learned a lot from her."

But like, did you, Sansa? Because if you did, you would probably have learned that, despite the whole "blowing up thousands of people at once" thing, this was actually one of the few victories Cersei has had against her enemies; after all, her hated brother Tyrion is now helping lead an invading army of dragons to capture Cersei's throne, the Tyrells are still a force to be reckoned with, the "brood of bitches" down in Dorne is causing major trouble, and, um, Sansa herself, a mere girl at the time of her escape, has been able to avoid Cersei's wrath for all this time. So maybe Cersei isn't actually the best role model to have?

It's an unsettling shift in Sansa's sensibility, if not an altogether unsurprising one. It makes a certain kind of sense that Sansa would be looking up to a powerful woman, particularly after being overruled by Jon, who is now ruling the ancestral home of the Starks, despite being a Snow—a bastard. One theme that runs throughout Game of Thrones is the ways in which a patriarchal society does itself no favors by ignoring the importance and contribution of a full 50 percent of its members. Yes, there are women who will find ways to work the system, and there are others who are content with their established roles within it. But for countless others, who chafe at being treated differently, resentments are justifiably formed, and the outcome of those feelings is impossible to predict. What GoT has taught us is that those resentments can turn into murderous rage and immoral power grabs, and it seems like Sansa is starting to identify more and more with Cersei, who has long lamented that if she had been born a boy, like Jaime, she would have been king long ago.

But Jon Snow is not Joffrey Baratheon, as even Sansa must admit; he has, in fact, just made a push toward gender equality by declaring that all young girls and women in the North will be trained in the arts of combat, the same as the boys and men. While some of Sansa's resentments are understandable (it was she, after all, whose call to Littlefinger and the Knights of the Vale, was integral in defeating Ramsey Bolton and gaining Jon his Kingship), she would still do better to forget Cersei, whose rash decision-making has led to countless deaths and untold destruction. There are better role models, and any decision that puts Sansa on the side of Littlefinger is the wrong one.

Other things of note:

—Ed Sheeran came to Westeros! In a totally not-distracting (read: very distracting) cameo in which he sang a song about women's hands being warm, so that was something. There were many good tweets about this cameo. And that's all there is to say about that.

—Daenerys made it to Dragonstone! You'd think this would be a more pivotal part of the episode. And it was very cool to see the throne room and the map room and the... sand. But, also, you know, it's just setting up the real Dragonstone action, which is going to take place when Jon Snow arrives, seeking White Walker-killing ammunition in the form of dragon glass...

—... because dragon glass can be found in great quantities on Dragonstone! Which we know for sure because Sam read it in a book. Reading is an activity Sam does occasionally while studying to be a Maester in Oldtown. Other things he does include lots of stuff related to poop and human organs. It looks terrible! Though it is through Sam's eyes that we see what has become of Jorah Mormont, which is that he is shut away in a dark cell, awaiting a cure for Greyscale, it seems.

—We do get a lot of good time with the Hound this episode, which is nice. Even though it mostly serves to remind us that the Hound used to be Bad. Now, though, he is Good. And he can even see things in the fire! One of those things is that the White Walkers are going to breach the Wall at Eastwatch-by-the-Sea, so the Hound and his merry men must head there to try and stop the army of the dead.

—And then finally, there's Euron Greyjoy, who has descended upon King's Landing to propose marriage to Cersei and to have a dick-measuring contest with Jaime. The latter goes better than the former, but Euron leaves the Queen's court with a promise to return bearing an ideal wedding gift. And while we know that the one thing Cersei really wants is her brother Tyrion's head on a platter, that's probably not going to happen, so Euron will undoubtedly either be bringing back someone else's head (Ellaria Sand? The Queen of Thorns?) or, more intriguingly, the Dragonbinder, a mythical horn that has the power to bind dragons to do the will of anyone who blows it. Such a thing might come in handy for anyone fighting, oh, an army of dragons in the not too distant future.