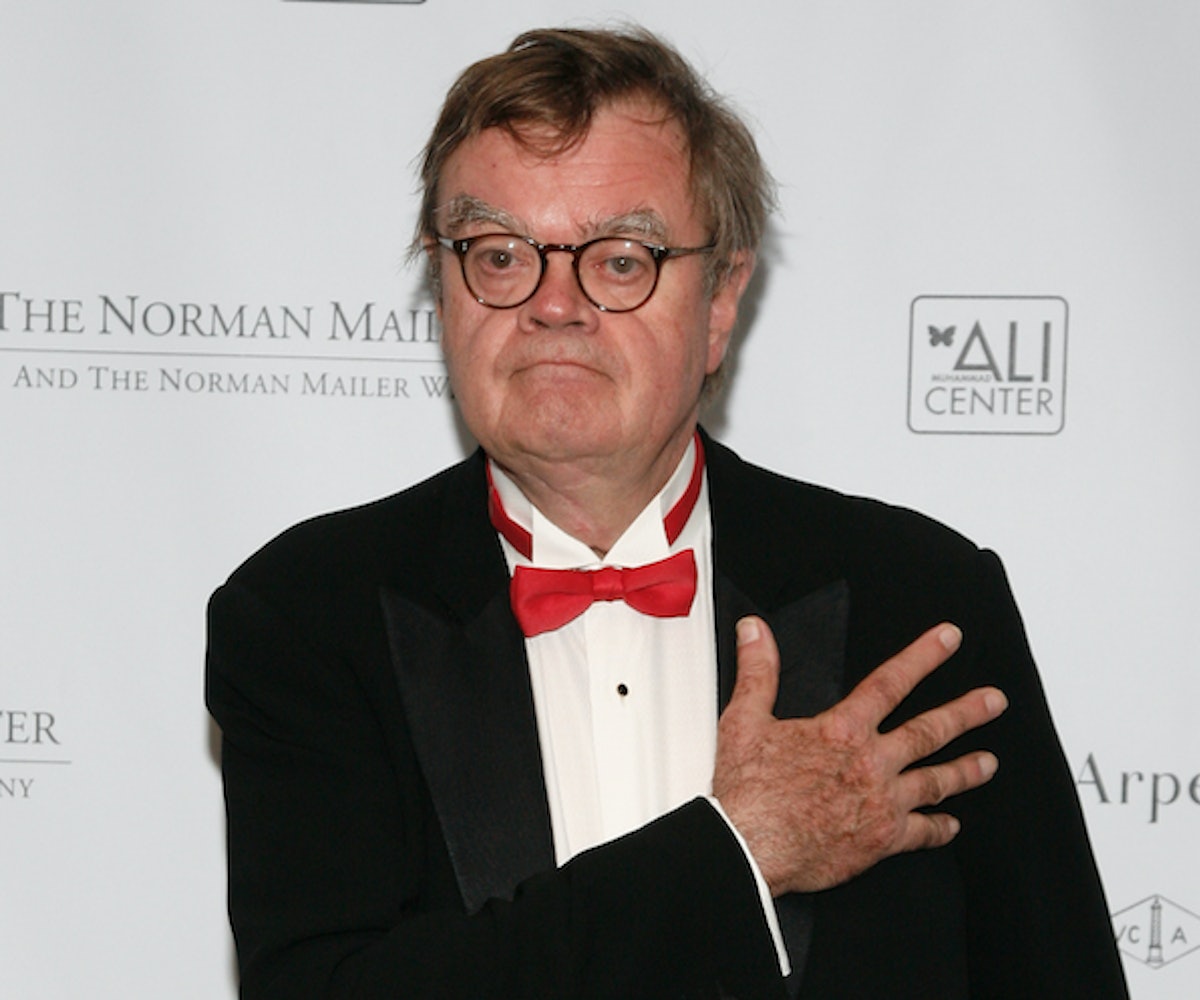 On Wednesday morning, a bunch of people, many I hadn’t heard from in a while, started texting and emailing me. They sent links to various articles about Garrison Keillor, who had just been fired from his long tenure at Minnesota Public Radio for allegations of improper behavior. They reached out to me not just because I’m from Minnesota, which I am, or because I loved A Prairie Home Companion, which I had and listened to every Saturday evening throughout the dead of winter and lazy summer nights since I can remember, and not even because the particular small town that I came from, Cold Spring, is one of the specific hamlet-like places (population just under 2,000 while I grew up) that Keillor based his mythical Lake Wobegon on. No, on Wednesday, these people raced to reach out to me because, somewhere along the line, I had told them a story about Garrison Keillor, too.

Their messages came with notes like, “Natalie, what have you done…” jokingly implying I was the one who had outed Keillor. Or with the subject line, “You called it, kid.” Or, “I think of the story you told me often.” Or, “Indeed,” texted next to the article whose headline read, “Garrison Keillor fired by Minnesota Public Radio over allegations of improper behavior.” You get the point. In one form or another, all of these friends were acknowledging that the story I had told them about my run-in with Keillor—though it did not constitute overt harassment or obvious misconduct—had the unmistakable stench of weirdness. Or of, um… that ain’t quite right, or, more simply, of behavior that, between a 26-year-old female in her place of work and a famous man more than twice her age, was at least not neutral.

The long and short of it was this: It had been one of those nasty blustery fall days in New York City, in 2009, when I was an editorial assistant at Workman Publishing. They were the publishers of a calendar of Keillor’s jokes. On November 12 of that year (I have records of this in my Gmail, from when I wrote of it that same day), I stood in the lobby after lunch, shaking the raindrops off my umbrella, when I looked up and saw, unmistakably, Keillor, clad in his usual slacks and red Adidas.

My initial reaction was: shit. How can I not say something to him? I’m not a person who likes to say things to celebrities for the sake of it, but, at the same time, there seemed to be no good reason not to mention our geographical connection. So when we ended up in the same elevator, I said hi and told him I was from Cold Spring. Right away, he asked me my name, and I told him. Then he asked me to spell my last name, and I did. Then he shook my hand and wondered if I also worked where he was headed. I told him I had listened to his show since I could remember, that it was nice to meet him, and then ran to my desk to call my mom.

Obviously, I thought that would be the end of it. But a few minutes later, my phone rang. I chirped hello, thinking I recognized the number. But on the other end, in that unmistakable baritone, I heard “Natalie Rinn?” I paused, confounded, knowing “This is Garrison Keillor” was about to come out of the other end. He followed with an apology about the fact that our elevator conversation had been “cut short.” I assured him it was quite okay. Then, time kind of suspended, and my brain started to short circuit as it tried to make sense of what was happening. No celebrity had previously called me directly to ask mundane questions about my life, so when that started to happen—and because our office had an open floor plan and was quiet as a graveyard and everyone knew Keillor was there that day and could hear me awkwardly answering his almost tedious questions—I was uncomfortable, to say the least. What had brought me to New York City? he wondered. Where had I gone to college? What had I studied? Did I like New York City? Where did I live?

Eventually, I had no idea what to do because the conversation seemed to be going nowhere, so I found myself asking Keillor what he was doing in town. He told me that, in addition to checking in on his work in the office, he was giving a series of shows that weekend at Town Hall, and offered me tickets. “Where can I send them?” he asked. Then he gave me his private Gmail address, so I could let him know (the office, I would end up writing). Finally, at the end of the call, he bid me, “Good luck, kid.”

I never heard from Keillor again, and he never sent the tickets to the office.

Throughout the years, I’d tell friends this story when his name came up. And then on Wednesday, some of those friends reached out and affirmed that, yeah, we’re not exactly surprised by this. But, why? After all, in my mind, Keillor had not done anything wrong with me, not in a damning kind of way.

But in this case, that is the specific point. Inappropriate behavior doesn’t have to enter the realm of the physical or sexual or verbally lewd to be inappropriate. Inappropriate behavior becomes inappropriate—especially in the context of a person who is powerful and famous, and who exerts their power and fame over a much younger person with neither of those things—as soon as that behavior makes the other person feel weird, or helpless, or just kind of thrown off, because whatever it is they are doing is certainly not normal.

Because here’s something else that’s true. Powerful people who make others feel compromised don’t do one basic thing that everyone else has to do: think about other people, and how they feel. Indeed, at the root of powerful people’s actions is a type of narcissism, a lack of understanding that the world shouldn’t work according to their whims. It shouldn’t, but it often does because they’re powerful and famous. They get to do whatever they want, to whomever they want, and get away with it. The president of the United States literally told Billy Bush that.

And for once, unfortunately, he is more right than not.

And in the case of my interaction with Keillor—even though it does not involve something as egregious as gleefully bragging about grabbing female genitals—the foundation of the problem is one in the same. These titanic men, with rot in their souls, are not concerned with rules. They make their own, but they do not follow those of others. Keillor might not have been breaking any clear rule when he called me on the phone and asked me a bunch of personal questions, but he also wasn’t paying attention to normal protocol about how to act in a professional environment. Instead, he was doing whatever the fuck he wanted, which happened to be something that was kind of jarring and weird. And I let him do it, and he knew I would because I told him I liked his art. I was easy prey comes, and he lunged.

In the life of one of these powerful predators, this cycle of hunt-and-attack continues until one day, one of their victims lunges back. Maybe she says, “Actually, I did not want your hand on my bare back.” Maybe it’s something else. But it’s enough to disrupt the cycle, to throw a wrench in the machine.

Even though my story with Keillor does not involve him groping my bare skin, one thing is still similar: Keillor did what he wanted with people who have no power. It’s easy to see how he’s capable of doing worse than calling a young woman at her office and asking a series of strangely probing questions about her life, sharing his personal email address, asking for her own, and then disappearing. It’s a reminder that even relatively mild shitty stories about men are almost definitely indicative of a whole teeming sewer under the surface.

Here’s another thing: These stories about bad behavior do not follow every man around. This is why women need to trust their instincts. When something feels off, it’s probably because it is. The inciting incident doesn’t have to fit into a tidy sentence about why it specifically sucked in order for it to not be all right, as my own story about Keillor demonstrates.  My gut told me it was, somehow, not straightforward. And the rest of my friends who texted me on Wednesday felt the same way, too.

In the end, that is a key takeaway at this point in time, when abusive men are being exposed by the strength of women’s stories. It is essential to feel comfortable enough to trust our guts, even—and especially—when situations are not black and white. And then turning our intuition into narratives and calling out the people responsible, even—and especially—when the behavior in question is as ambiguous as a phone call. Because there are far worse cases of harassment and abuse and assault that have come to light in the last few weeks, but they’re not the whole story, they’re just a part of systemic misogyny, not all of it. The majority of harassers are more insidious, sly, like snakes. And they’re everywhere, even if they’re not always biting, they’re hanging from the trees, lying in wait, ready for whoever walks by the nest.

And finally, an epilogue: Years after my run-in with Keillor, oddly enough, I sat across from him on an airplane. After the flight, he offered to help me take down my luggage from the overhead bin. I said, “That’s okay, I got it—but actually, we have met once before.” I went on to tell him a little bit about that encounter. Maybe I’d jog his memory. Unsurprisingly, he told me he did not remember.