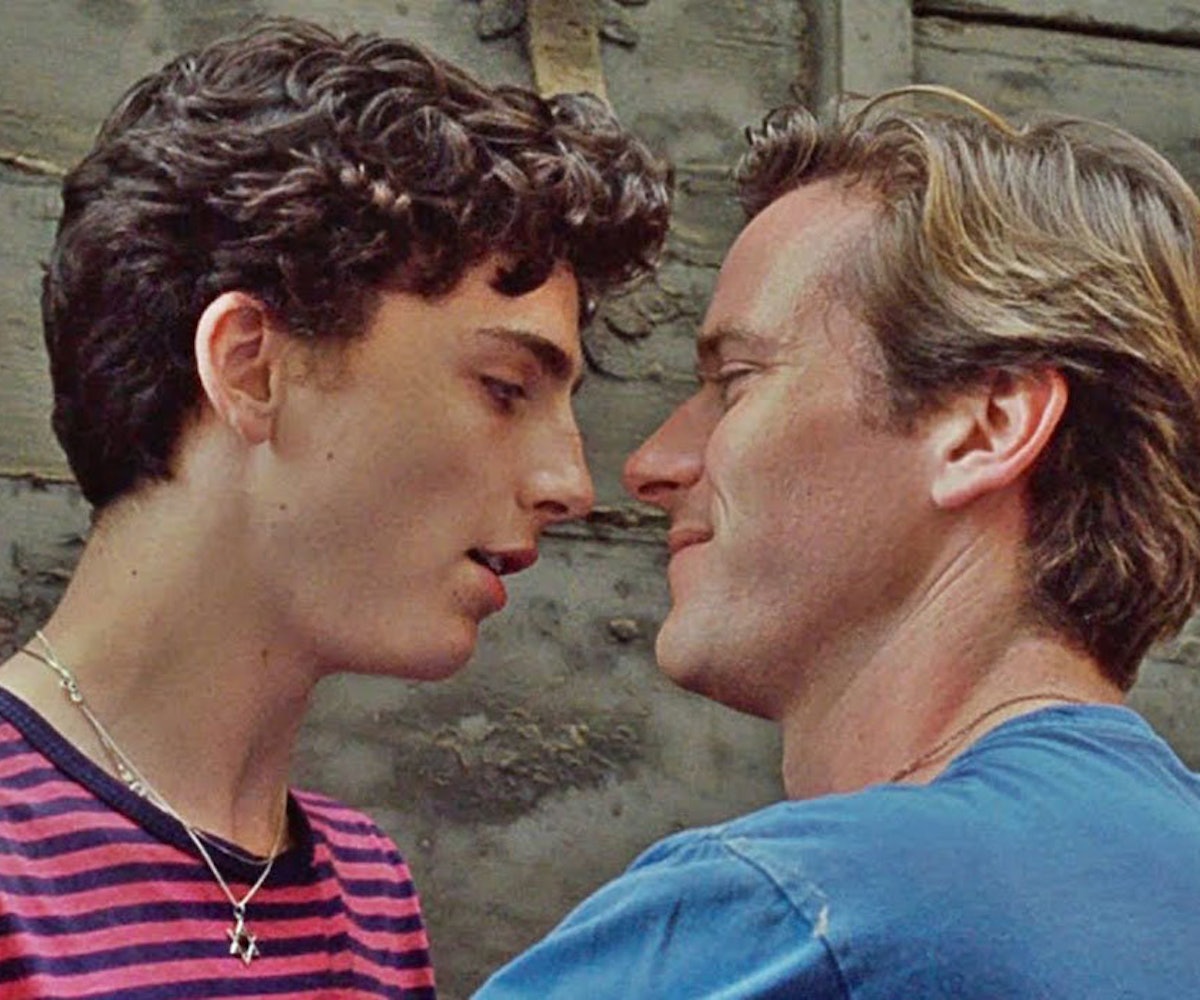 There is a scene in André Aciman's 2007 novel, Call Me by Your Name, where the story's narrator and protagonist, Elio, takes a reprieve from the dog days of summer at his family's Italian countryside home. Up in his bedroom, he lays on top of his bed, closes his eyes, and dozes off into a dream, in which Oliver, the university student under Elio's father's summer apprenticeship, quietly enters the bedroom, undresses, and they engage in sweaty, passionate sex. It's erotic, sensual, and bursting with youthful desire. (Elio is, after all, still a virgin and only now discovering his sexuality.) It's a scene that doesn't progress the narrative but provides ample fuel for it as it shows us, the reader, how overwhelming and natural these newfound urges are. It's a scene that is unfortunately not included in Luca Guadagnino's devastatingly beautiful screen adaptation of the novel.

Though it may not exactly be as pivotal to the story's arch as the much-talked-about peach scene is—and I have to say Guadagnino and Timothée Chalamet (who plays Elio) do a spectacular job highlighting Elio's undeniable infatuation and longing for Oliver—it brings to mind the question of why something that character building would be omitted. Even the climactic sex scene between Oliver and Elio is shown through brief foreplay before the camera pans to the right, holding focus on a very lovely tree as the moment of Elio and Oliver's big moment of truly joining together happens outside of the frame. The sex the pair engage in during their final trip together, too, is hinted at, but not shown. For a narrative that's as specifically queer as Call Me by Your Name's, the omission of the sex acts between its two main characters is a bit of a head-scratcher. It also highlights just how far the LGBTQIA community still has to go when it comes to visibility in popular media.

For reasons rooted in homophobia, queer sex—especially man-on-man sex—has always been seen as pornographic. Todd Verow, an independent queer filmmaker in New York City, has shot both heteronormative and homosexual sex scenes; the former has led him to no trouble while the latter has resulted in film processing labs refusing to process the footage or even (questionably) losing the footage all together. "The real problem right now is online [distribution] companies and their even more vague and secretive 'standards,' where there is a definite bias against independent and queer films and the big studio product," he says.

"What is sexy or explicit differs from person to person," Gary Kramer, the critic for Gay City News and Philadelphia Gay News and author of Independent Queer Cinema, says. "It's oftentimes easier to let viewers imagine rather than present." That is, if the viewers want to. A major focal point in the 1995 documentary on LGBTQIA representation in Hollywood, The Celluloid Closet, is the idea that movie audiences project some part of themselves onto the characters on screen; a filmmaker (and distributor) asking an audience member who may not support the LGBTQIA community to empathize with an LGBTQIA character may be taken as an offense and, sadly, result in backlash and a decline in ticket sales. At this point in queer representation in the media, we're still at first base while heteronormative coupling is scoring home runs.

"Because film is a commercial enterprise, profitability sometimes comes into direct conflict with art, and sexual content is often the greatest source of friction," Erika Couto, a queer business and media strategist and film reviewer, says. "Television, meanwhile, has different regulations, and with the creation of specifically LGBTQIA-focused stations, there are more opportunities to show complex, beautiful, and messy relationships." And yet, HBO's big gay show, Looking, barely showed any queer sex, let alone male nudity. Queer culture, it would seem, is wanting both to see queer sex on film while also normalizing queer romance so as to not play into stereotypes.

The fear of marginalizing audiences into thinking queer people are defined by what they do in bed is a tricky one. Kathleen Archambeau, the author of Pride and Joy: LGBTQ Artists, Icons and Everyday Heroes, cites the taboo perception of queer sex acts by the masses. "Everyone wants queer sex to be dark and quick," Verow says. And it better be either between two very masculine, very handsome men or two women. Remember when Black Swan came out and one of the main talking points of the film was the sex scene between Natalie Portman and Mila Kunis? Though the folks that made it tried to steer the conversation away from that scene, the talk alone was enough to get thirsty bros to see the movie. Films like John Cameron Mitchell's Shortbus, which set out to normalize queer sex through non-erotic depictions of explicit auto-fellatio, gay anal sex, and multiple ejaculations, didn't really normalize it. As Kramer says, "It seemed to be more sensational for what it did than how it made [queer sex] more acceptable."

The only way of normalizing such acts is, of course, by daring to show more of it. Guadagnino's Call Me by Your Name does well in doing so, despite any problems I, personally, may have. For many, the romance between Elio and Oliver shown onscreen may be the most they can handle right now. It's a beautiful romance, as gut-wrenching and as relatable as it is fantastical. It's a solid step toward showing queer sex in what Verow calls "all of its exciting, frantic, fun and sloppy glory."

Call Me by Your Name hits theaters November 24.