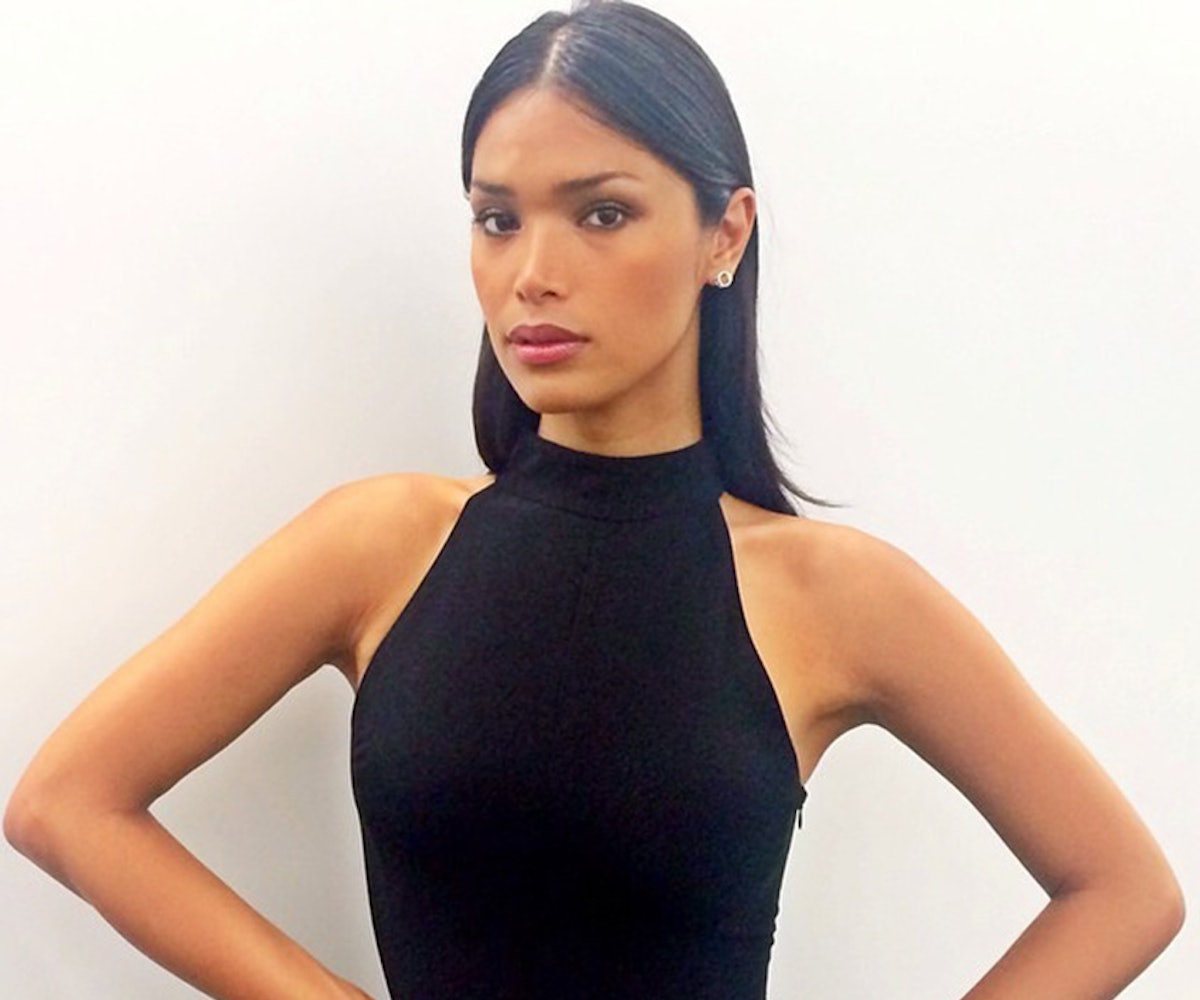 Most of us were born into a gender-normative culture. Girls played with dolls, wore dresses, and liked all things pink. Boys played sports, scuffed up their sneakers, and liked all things blue. The status quo wasn't necessarily taught intentionally, but through gendered bathrooms in schools, gendered toy aisles and store layouts, and even McDonald's Happy Meals, the male/female binary was nurtured. Thankfully, that's all changing. With transgender and other gender non-conforming narratives more frequently popping up in the media, the binary is gradually blurring in stores (like Target), and in schools, as Geena Rocero came to understand in this week's ASPIREist installment.

Rocero is a transgender activist, model, and founder of Gender Proud, an awareness campaign geared towards amplifying transgender narratives and helping individuals self-actualize. This week, she takes her activism to the other ASPIREist hosts and highlights gender education programs being implemented in grade schools across the nation. The 60 Minutes-type episode tackles trans youth, their support systems, and how the perception of gender is changing among young people. It's a touching installment—one that's necessary to push the trans narrative forward to new, more diverse territory. Ahead, we catch up with Rocero to talk about her experience with the show, the trans youth she's met, and what the next steps are for transgender equality.

ASPIREist is a new news show that tackles 21st-century problems and highlights how each of us can help using social media calls to action. With the help of Flipboard, the viewing experience becomes 360 as each episode has a digital magazine component to it. This week's episode will air Sunday, at 8am EST, on USA Network. It will be available to stream on YouTube and Flipboard soon after.

How did you get connected with ASPIREist?

How did you come to know about Tomás Rocha?

I got to know Tomás through one of the producers. What was really, really particularly important for me, when planning my segment, was talking about trans youth. I work with trans youth a lot; I like spending time with them. So we looked at the issues that affect the community and certainly, the bullying that happens in schools, that’s something that’s particularly of big concern for me. 82 percent of LGBTs have reported being bullied, so I wanted to figure out how I could cover that topic. Most of those things happen within an elementary and middle school and high school, so I wanted to figure out what we could talk about. What does it look like in schools that are teaching curriculums that talk about gender? Not just transgender, but gender at all. So, we found Tomás, we went to visit Berkley and met his mom, met some of Tomás’ teachers, and we had a great time.

What lessons did Tomás teach you?

At one point, Tomás said, “You have to be brave to be yourself.” Coming from a young person—speaking with such truth—for me, that was the fundamental message of what Tomás could teach us. For the longest time, people thought young trans people were too young to figure out about their gender. But in reality, I knew at a young age. I knew at 5 years old. Tomás’ experiences reflected my experience at such a young age. I know how to self-identify, and certainly, there’s a lot of studies that have proven this: Young people know their gender at between the ages of 4 and 5. We know our identity at such a young age. So what I learned from Tomás is to be brave and be honest.

It’s really humbling to watch the group of young students talk openly about gender. What sort of conversations did you have with them that weren’t in the episode?

Kids are so smart, you know? If you want to know the truth about something, have a conversation with a kid, because they have no filter. Today, they have not been taught by society that gender is just this one thing. So, I think in the bigger picture, when I was speaking with them, these kids, they just know the complexities about gender. One of the kids even mentioned, “I love seeing trans people in the media because they just look so empowered when they talk about their stories.” They can handle these kinds of topics. When we actually teach kids to be more empathetic about diversity, about gender diversity and about gender roles and gender bias, they can actually make that decision for themselves about what is gender. It’s not simply about, “Let’s just talk to them about transgender education.” Let’s talk about gender roles. Let’s teach a young transgender girl to believe, “Oh, I could be a president of a country. I could be a scientist.”

What was your gender education growing up?

We were never taught anything in school about gender. I learned about gender, gender fluidity, and gender spectrums through our culture. In the Philippines, we’ve had this long history of transgender beauty pageants. It’s part of our culture. At 13 years old, I became one of the most famous transgender beauty queens in the Philippines. Through that community, through that family—that chosen family—I learned and fully understood my gender expression, my gender identity, and the complexities of it. However, it’s still not fully understood, you know? There needs to be political recognition. There should be policies that support transgender youth regarding bathrooms, regarding anti-discrimination bills and gender recognition. In the Philippines, it’s culturally visible, but it’s not politically recognized. It’s tolerated. We’re allowed to express ourselves; we’re part of the culture, but, it’s not fully understood, and that is a reflection of it not being recognized. There are no transgender rights in the Philippines.

How do you think social media and the Internet have affected trans youth?

In many ways! If I post something on my social media, the people that have followed me, they see an empowered, successful, happy transgender woman of color from the Philippines doing what I’m doing. I want a young trans youth to see that and possibly reach a of point of clarity where they can actually live their dream and live their truth, because when I was young, I never saw that. I never saw a positive portrayal of trans people in the media. Now that people that follow me all over the world and have access to the things that I’m doing, when they see me doing a campaign or they see me on the cover of magazines or a billboard, they get to see someone living the truth. Social media has shown the world that you can be really successful, no matter your gender identity, and that’s worthy of celebration and representation.

Most definitely. That leads into the topic of exposure. Since TIME ran the Transgender Tipping Point cover, the trans narrative has only gotten bigger and more robust within the media. What are the next steps in increasing awareness? It seems like we’re consuming a very privileged narrative at the moment.

I think that transgender visibility and the coverage in mainstream media and pop culture has definitely gotten bigger. I think it’s time to go deeper and make it more complicated and make it more interrelated because all of these things are. You have to look at it from this very intersectional lens. We need to make sure that we center the narratives of the most marginalized; which is transgender people of color. You know, people would think, “Oh my god, the transgender tipping point.” It’s not. Last year was the most violent in my community. There were more than 20 trans people murdered and most were trans people of color. All of these things are interlinked and that’s why we need to get to the root cause of transphobia, homophobia, racism, and misogyny. That’s how we can deconstruct these narratives. We have to be bigger, we have to dig deeper and get more complicated and more thorough. Hey, I’m a producer. I have a production company with Gender Proud. I will tell more complicated stories about trans people. I want to see movies and movie roles that are being portrayed by trans people, you know?

What do you hope audiences walk away from your episode with?

First, empathy in the complexity of gender. I hope people can finally realize gender is not just this thing. It’s not just transgender. It’s not just about the binary, right? For the longest time, we’ve been operating in this mindset that gender is just this very rigid stereotypical male and stereotypical female. I hope audiences understand that gender is a spectrum. We are seeing the complexity of it with each coming out story. That is the proof. People will say, “Transgender people have always accepted.” Some people think that transgender is a new identity because, finally, we’re seeing it in the media. Hopefully, people will also realize that we’ve been around forever. We are who we say we are. Hopefully, through storytelling and through media representation, people will create empathy.