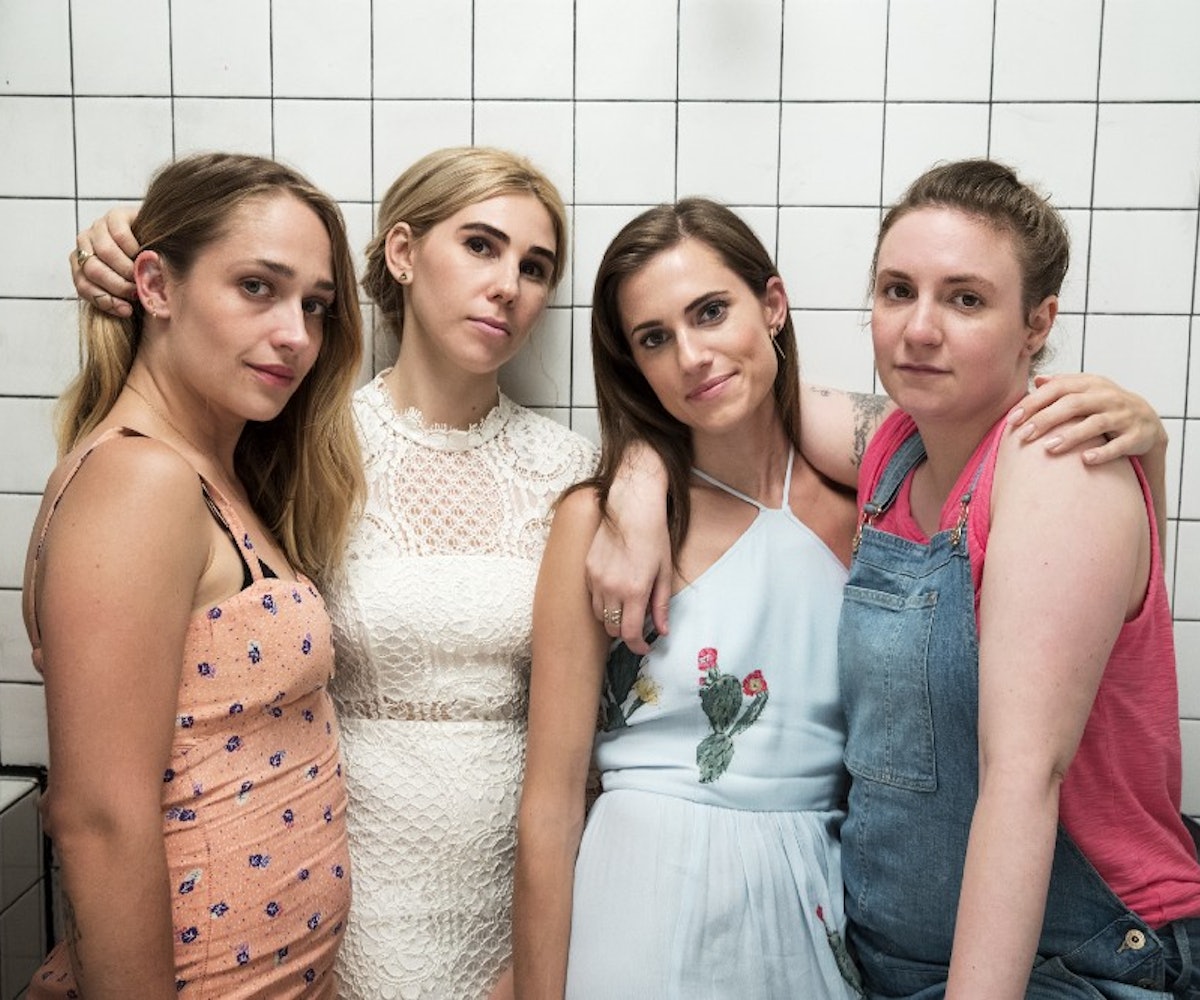 Recently, I was talking with the writer Durga Chew-Bose about her new book Too Much and Not the Mood, a collection of essays which touches upon many things, among them Chew-Bose's close bonds with her friends. I told her I felt like the book read, in part, like a love letter to friendship, rather than the more usual literary focus on romance, and Chew-Bose lightly laughed and said, "My relationships with my friends and my family feel like romantic relationships in that they are... work."

These words came back to me when I watched the penultimate episode of Girls last Sunday night. In it, the four main characters, upon whose friendship the show was not only titled but also premised, gather together for one final time—at an engagement party no less. If Girls were just about any other show, the engagement party would have been cause for a very specific type of celebration, one which promised futures full of happiness, success, love, and abundance. Instead, this party—to which one of the girls had only been invited reluctantly, and another, not at all—became a different kind of reckoning, one which subverted the classic television trope that no matter how rocky your romantic relationships may be, your friends will always be there for you, serving as a steady influence during the wild ups and downs of life.

This idea that friends—and particularly female friends—will always be there for you has been portrayed on television to great effect for decades. Whether via Lucy and Ethel's unbreakable bond in I Love Lucy; or Dorothy, Blanche, Rose, and Sophia's late-night cheesecake chatting sessions in Golden Girls; or Carrie, Miranda, Samantha, and Charlotte's brunch-time bawdy conversations on Sex and the City, our cultural conversation as it pertains to female friendship has had a unifying message: These relationships are always positive, and they're the only ones that can be counted on to last forever.

More than just that, as, week after week, episode after episode, viewers would see small fights erupt between the TV friends, one other thing was always made clear; namely, that friendships could and should survive their low points because these would always be ultimately unimportant. Most of these fights, after all, centered around bad communication resulting in hurt feelings; there was never anything done that truly hurt, or that couldn't be fixed in under a half hour.

While there is no doubt that there's something comforting about this dynamic, about the idea of unconditional platonic love, there was also always something missing, something which Chew-Bose referenced in our conversation: Even the best of friendships take a lot of work.

Sometimes they take work because of distance, whether literal or metaphorical. Like, it would be nice (maybe) if all of us could live down the hall from or share a big house in Miami with our best friends, but that's not usually how life goes. And even when we do all live in the same city as one another, it can still be really hard to find the time for a weekly brunch hang. More than that, though, same as in a romantic relationship, when you have a really close bond with someone and share true intimacy, when you share a bed or a bathroom together, as Hannah does with Marnie and Jessa and Shoshanna on Girls, you run the very real risk of hurting them much more deeply than if you were merely casual acquaintances. And hurt each other we do; we're only human, after all. But, much as in a romance, once you really hurt one another—say by sleeping with your friend's ex, as both Marnie and Jessa did to Shoshanna and Hannah, respectively—those friendships risk falling apart forever.

Or, at least, they would in real life, but rarely ever on television. Until Girls, that is. Rather than tack on some sort of sappy and vaguely ominous "we're all in this together, and we always will be whether we want to or not" ending (which, in fairness, Marnie wanted to have, because, of course, she would, because she's the worst), Girls chose to have Shoshanna—always the oddball of the group, the one whose continued presence in the friend group you never quite understood—say that no, enough was enough.

Since Girls started airing, a common point of contention about the show has revolved on whether or not it was "real." This always seemed semi-absurd to me. It's television, why do we even need it to be real? As with all art, its inherent realness isn't the thing; it's how it reflects and examines reality that matters. But with this last episode, when it became clear that Girls wasn't going to be a show that allowed four women, who had nothing in common, maybe didn't even like each other at all, and treated each other horribly, to stay friends, it suddenly became all too real. Girls became one of the only (if not the only) shows to deconstruct the myths around female friendships and demonstrate what really happens when, for whatever reason, we don't take care of the people around us.

And this isn't necessarily a bad thing. Girls shows that sometimes it is only by shedding these types of relationships—the damaging ones, the unfulfilling ones—that we can truly become ourselves, whoever that may be. The final shot of the episode reveals all four women dancing their hearts out; they don't dance together, their rhythms and styles don't mesh at all. But they are able to be completely and utterly themselves; they don't need each other anymore because they're better off alone. And, funnily enough, that winds up being the happiest ending of them all.

NEXT UP
Nylon Nights
Post NYFW, Chanel Gathers All the Girls for Annual 'Through Her Lens' Lunch
Beauty
Meet Erika “Babygirl” De Leon, The B-Girl Who’s Empowering A New Generation of Female Breakers
Entertainment
Paramore's "This Is Why" & 9 Other New Songs Out This Week
Entertainment
Lindsay Lohan Teases Her Return To Film, 'Falling For Christmas'