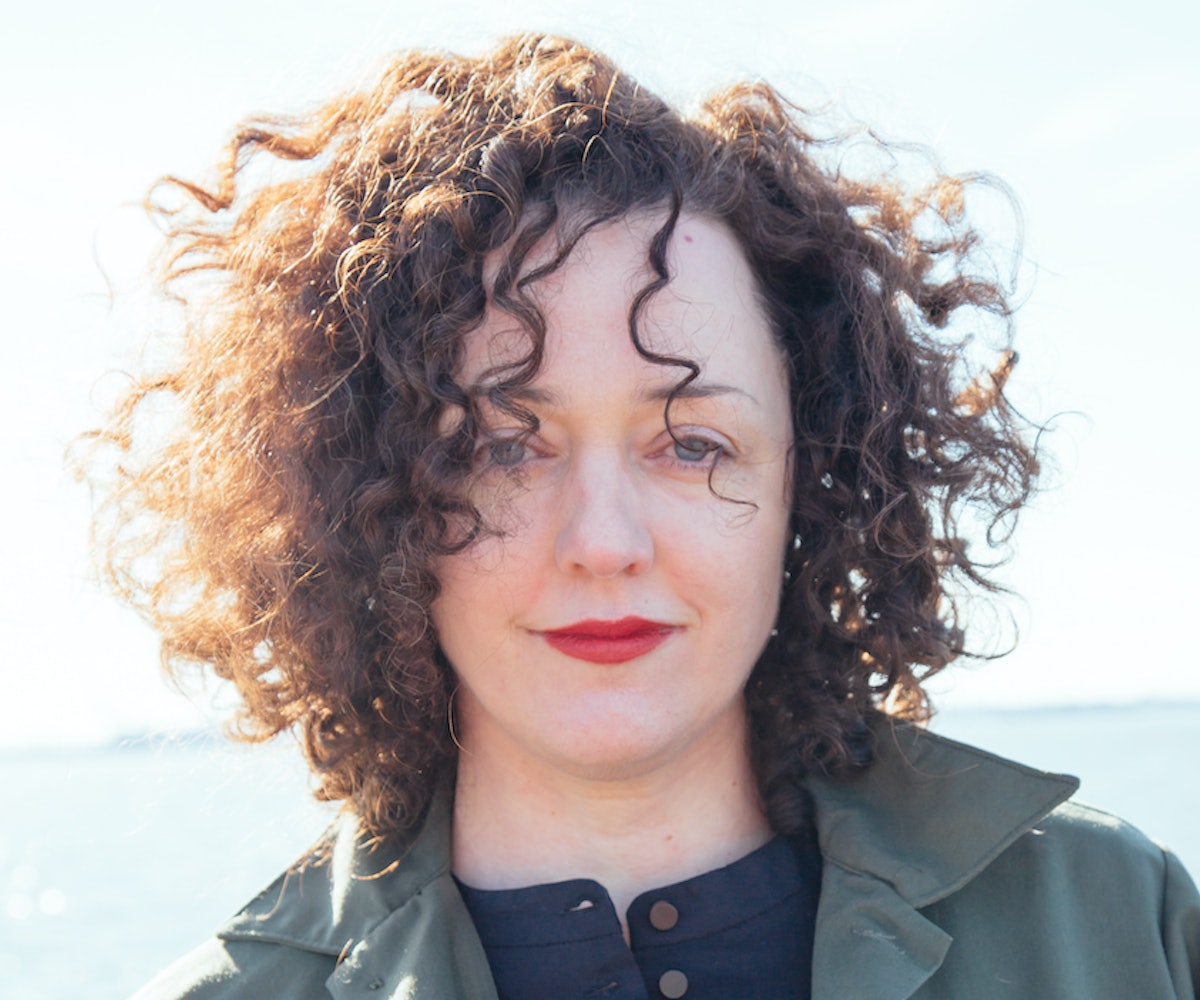 "Think about it," Glynnis MacNicol says, sitting across a table from me in a coffee shop. "Women are always talked about as being drivers; we don't like them in the driver's seat. In stories about women on the road, they're either being chased or they're fleeing something." This is all, MacNicol points out, part of a larger narrative, a societal one, in which "women are rarely afforded the opportunity to navigate their own lives." This is a narrative which MacNicol is seeking to upend, both in the way she lives her own life and with the documentation of that life, in her new memoir, No One Tells You This.

Documenting a period in her life that women are taught to, if not fear, then at least use as a time to reflect on whether or not they've achieved certain, widely agreed-upon life goals—the years surrounding her 40th birthday—No One Tells You This is MacNicol's exploration of what it looks like to be a woman who isn't doing things in the traditional way, one who has eschewed things like marriage and children; one who is, in a sense, driving down a road with no map to follow. And so the analogy about women drivers, and the fact that they're so rarely trusted to know where they're going without external guidance, is an apt one. It is, in fact, one of the reasons why MacNicol originally wanted to call the book Good Driving, as a means of offering up a version of life that many women don't think is available, one in which the destination might not be predetermined, and in which the focus is on the fact of traveling itself.

It's easy enough to forget the many ways in which women are told—from the time they are young girls—that their lives should unfold in a certain way, and that way necessarily includes marriage and children; even as our culture has grown somewhat less heteronormative, the pressure placed upon women to be married and have children is still all too prevalent. But just as a recent wave of books on motherhood has revealed the need to offer a different perspective on a part of life that has too often been portrayed in only one specific way, so, too, is there now the need to show what life is like for women who don't have children or get married, who are set apart from those rituals which have long served as signifiers of a "successful" life.

In countless ways, MacNicol is living what could only objectively be called a "successful" life: She has a wonderful, close group of friends; a great relationship with her family, including a close connections with her nephew and niece, who wants to be just like "Auntie Glynnis" when she grows up; a vibrant, self-directed career; a terrific apartment in New York City; the ability to frequently travel around the world. It's the kind of life that, were any man to have it, would be envied by all; and yet, because MacNicol is a woman, she's constantly being told that she still has time to find the right man and have kids one day. Because she's a woman, total strangers feel compelled to pity MacNicol and tell her that she's done life all wrong, implicitly trying to humble her for living the life she does.

MacNicol, who says, "I'm living as fulfilled and enjoyable and difficult as a life as I would be if I'd made a different decision," thinks that this type of constant critique that she endures speaks to larger problems with how our society treats unburdened women: "I feel like, in the same way we don't train women what to do with money, we don't train women to deal with any sort of freedom. And when we have it, we're told to feel shame for it. Like, what's wrong with me that I can do whatever I want? What's wrong with me that I don't have anything preventing me from traveling?"

We've long been taught to either pity or fear the single woman; throughout history, we've seen them as everything from witches to crones, from sexual temptresses to cat-loving spinsters—rarely are they depicted as being happy with their lives, rarely are they seen as being in charge of their present reality. No One Tells You This changes this by providing something that MacNicol likens to a "field report" from the frontlines of her life, as it's being lived. She says, "I wanted to take a snapshot of what was happening, as opposed to insinuating, 'This is what it means.' I really just wanted to say, this is what's happening in my life and I see it happening in so many other women's lives, but I don't see it being reported on anywhere. I really wanted it to be like, 'I'm out here,' and I wanted to say what it's like, because nobody else is."

What it's like, for MacNicol, is not just a rosy picture of a woman doing whatever she wants, without a care in the world. Rather, it's a nuanced exploration of MacNicol coming to terms with where her decisions throughout her 20s and 30s have brought her, for better and for worse. There is a lot of joy: MacNicol has a truly wonderful group of friends, and her traveling takes her everywhere from the glaciers and hot springs of Iceland to the far reaches of Wyoming. Her career offers her the flexibility to leave her home base of New York City and visit her family in Canada, as needed. She is aware of the fact that she has many wonderful things, and that some might be dismissive of her because of her privilege; she says, "I do belong to a strata of privilege that I'm aware of, but I also don't think it's something I need to apologize for, because we still do need someone to model this [type of life], so that there's a trickle-down effect. I'm aware of why I can do this, and I'm aware of why not everyone can do this, and so those are the things we need to talk about, so that other people can do this."

And there are also many difficult things in MacNicol's life: The memoir is bookended with the death of MacNicol's mother, whose life was wildly different from MacNicol's own, and centered around her role as a wife and mother. Beyond that, MacNicol is not immune to bad relationships, including unfortunate online dating matches and the kind of toxic relationships that have your best friends threatening to block a guy's number if he texts you one more time. MacNicol also confronts the perilous financial realities of working in a chaotic industry (media), and how that affects things like retirement planning and health care needs. Plus, MacNicol grapples with whether or not she is really okay without having kids, and her decision-making process is one of the more interesting, insightful ones on the topic I've read, never veering into the kind of binary we usually assign to women, that they either love or hate children.

But perhaps what becomes most clear is that the challenges of living a life not frequently documented is that, even when other people accept that your life can still be a celebratory one, they don't quite know how to celebrate it. MacNicol brings up an episode of that ultimate "single girls trying to have it all on their own" TV show, Sex and the City, and mentions the episode "A Woman's Right to Shoes," in which Carrie, upset at having a pair of shoes stolen when she was celebrating the birth of yet another one her married friends' children, has those friends buy her a new pair of shoes—but as part of a gift registry for the occasion of Carrie's marriage, to herself.

MacNicol says she initially thought that story line was somewhat silly, but now, "The older I get and the more I understand her challenges, the more I understand the motivations behind those actions. How do you measure the progression of a life without any rituals? It's really tough. I don't know what the solution to that is, but I think by writing the book, I hoped to create a marker, because I think we should get some kind of celebration of our lives that feels deeply meaningful."

And while, of course, Sex and the City ended rather disappointingly for anyone who wanted a celebration of the single girl (MacNicol thinks that Carrie should have moved into that Brooklyn brownstone with Miranda, rather than having married Big; we agree), it's now possible to see a future in which the choice to be single, to live life on your own terms, will be widely celebrated. Or at least, it's important to fight for a future in which it can be. As women's freedoms are more and more curtailed by a presidential administration which seeks to make it increasingly difficult for women to have access to health care (it's no coincidence that women's relatively recent economic freedoms came alongside the rise of readily available birth control and abortion rights), it is essential to have a diversity of narratives available on the myriad ways a woman's life can be lived—and Glynnis MacNicol is here to tell you how she's lived her life, so that more women can feel like it's possible to live their own lives in any way they please, and never have to feel ashamed for their freedom or their choices.

No One Tells You This is available for purchase here.