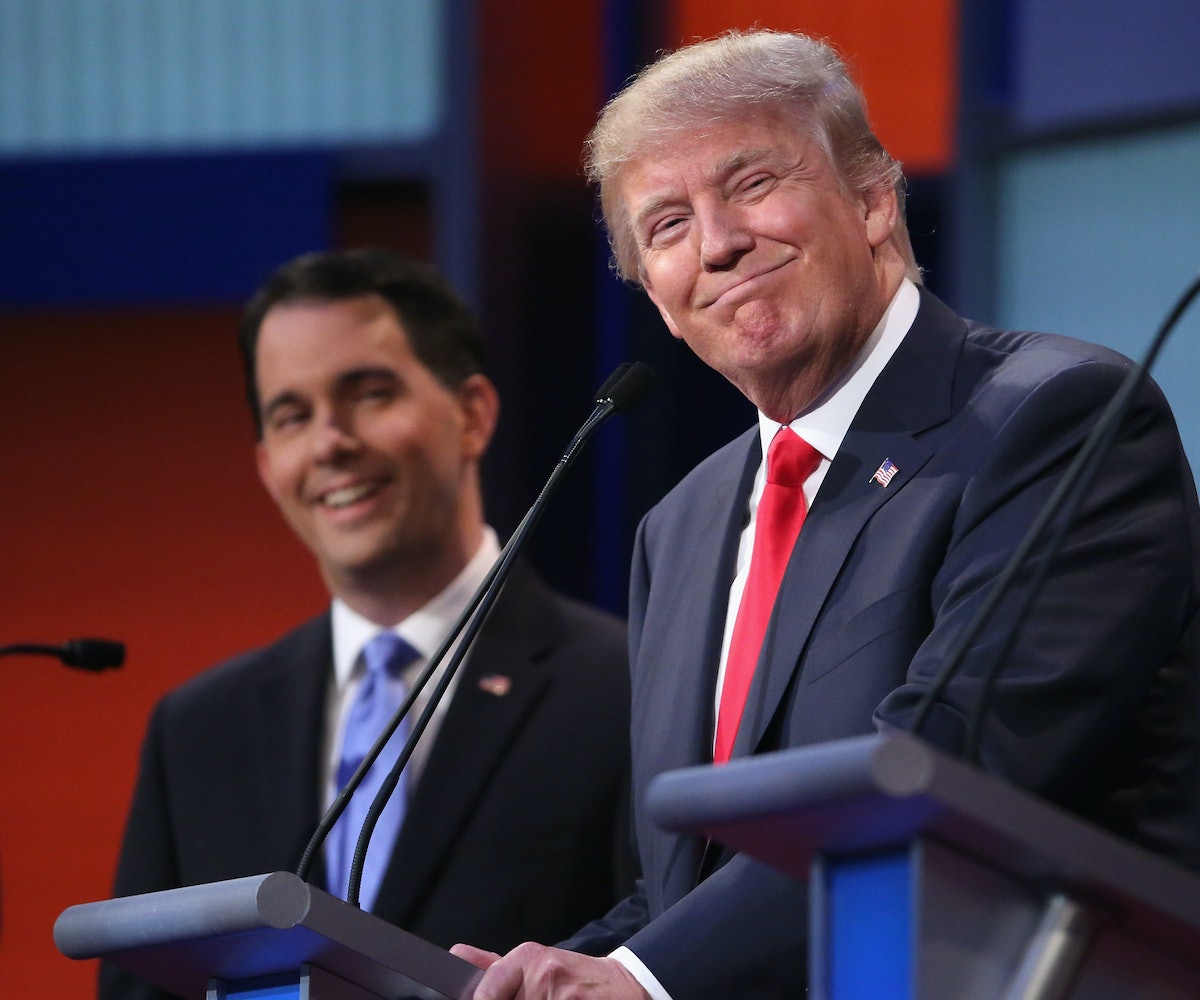 This morning though, we’ve come down from our IPA/Jon Stewart-induced high and realized what we just saw. So to cope, we've analysed the most WTF moments of the night through the medium they deserve—GIFs. It's a valuable perspective that the Washington Post just can't provide.

Dr. Ben Carson: “Well, I haven't said anything about me being the only one to do anything, so let me try that. I'm the only one to separate siamese twins…The—the only one to operate on babies while they were still in mother's womb, the only one to take out half of a brain, although you would think, if you go to Washington, that someone had beat me to it."

Donald Trump: “Border Patrol, I was at the border last week. Border Patrol, people that I deal with, that I talk to, they say this is what’s happening. Because our leaders are stupid. Our politicians are stupid. And the Mexican government is much smarter, much sharper, much more cunning. And they send the bad ones over because they don’t want to pay for them. They don’t want to take care of them. Why should they when the stupid leaders of the United States will do it for them? And that’s what is happening whether you like it or not.”

Host Megyn Kelly: “After the break, we're going to let the candidates make their closing statements, their final thoughts, and God.”

Sen. Ted Cruz: “The next thing I intend to do is instruct the Department of Justice and the IRS to start persecuting religious liberty.” [emphasis added]

Huckabee: “I think the next president ought to invoke the Fifth, and Fourteenth Amendments to the constitution now that we clearly know that that baby inside the mother’s womb is a person at the moment of conception. The reason we know that it is is because of the DNA schedule that we now have clear scientific evidence on. And, this notion that we just continue to ignore the personhood of the individual is a violation of that unborn child’s Fifth and 14th Amendment rights for due process and equal protection under the law. It’s time that we recognize the Supreme Court is not the supreme being, and we change the policy to be pro-life and protect children instead of rip up their body parts and sell them like they’re parts to a Buick.”

Kelly: “Mr. Trump, one of the things people love about you is you speak your mind and you don’t use a politician’s filter. However, that is not without its downsides, in particular, when it comes to women. You’ve called women you don’t like ‘fat pigs, dogs, slobs, and disgusting animals.’ Your Twitter account…”

Kelly: “No, it wasn’t. Your Twitter account…For the record, it was well beyond Rosie O’Donnell.”

Huckabee: “Most of the income in this country is made by people at the top who get dividends and—and capital gains. The Fair [revised tax code] transforms the process by which we fund Social Security and Medicare because the money paid in consumption is paid by everybody, including illegals, prostitutes, pimps, drug dealers, all the people that are freeloading off the system now.”

Trump: “If Iran was a stock, you folks should go out and buy it right now because you'll quadruple.”

Carson: “You know, I was asked by an NPR reporter once, why don't I talk about race that often. I said it's because I'm a neurosurgeon. And she thought that was a strange response.”