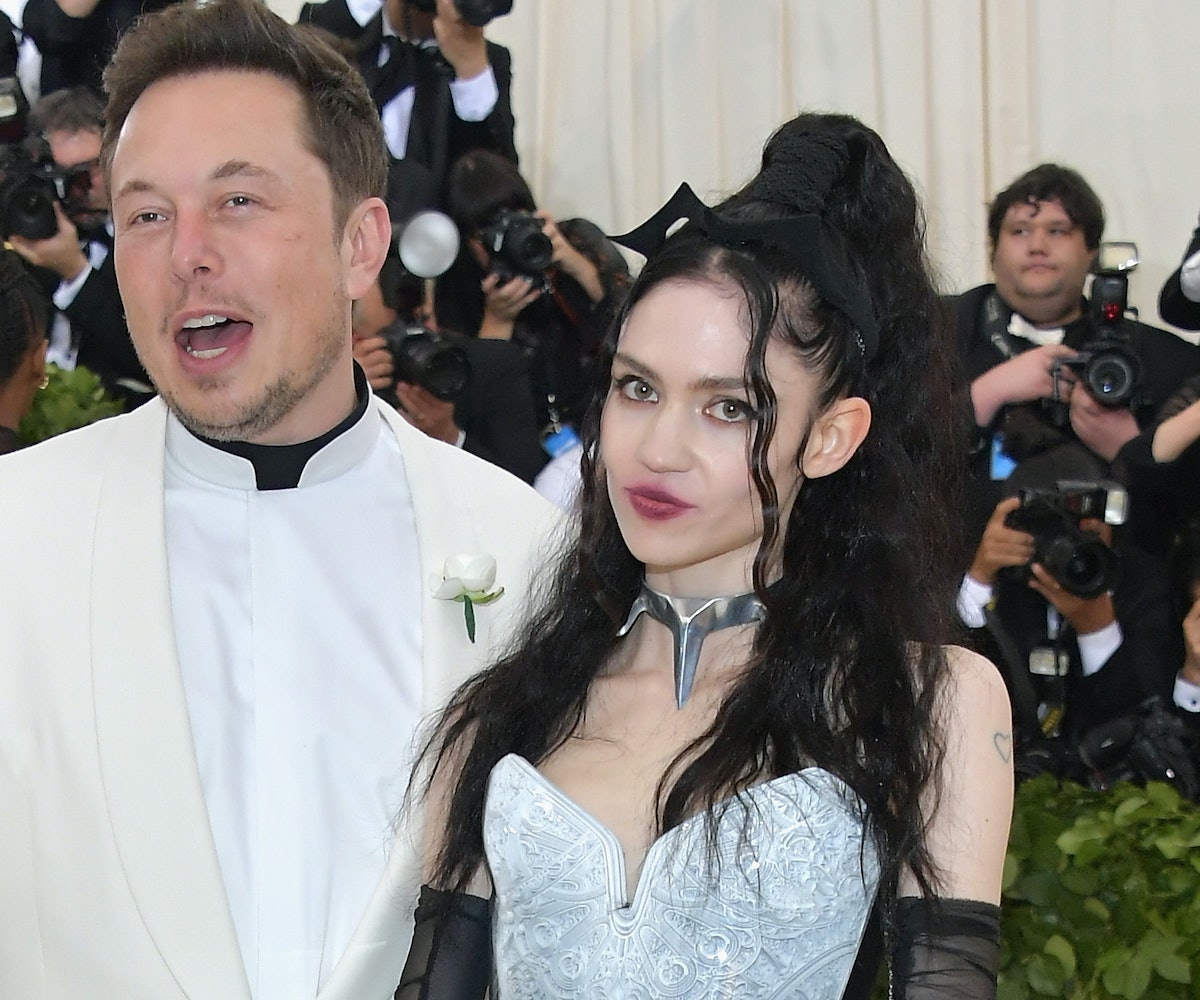 Unless you’ve been living under a rock for the past week, you’ve probably heard about Elon Musk and Grimes and how they're... a couple. What started as a strange, speculated-upon conversation about cocaine comets soon morphed into the buzzy news that the two had been quietly dating and would make their debut as a couple on the Met Gala red carpet. So naturally, once they finally emerged (from the depths of a Tesla limo??) together, the entire internet exploded on cue.

But why? On one hand, we have Grimes, an iconoclastic pop artist known for her distinctly radical, feminist, and disruptive worldview. On the other, we have Musk, an alleged union-busting, multibillionaire tech CEO with a taste for candy. It’s a pairing some consider ideologically mismatched and has subsequently caused two different fan followings to freak out.

Everywhere you turn on Twitter, stills from everything from The Girl with the Dragon Tattoo to The Simpsons—all featuring an alternative-looking, younger girl paired with an archetypally nerdy guy—cluttered the “grimes elon” search results. On Reddit, people continually made the same joke, all rooted in the same “goth gf” meme that’s haunted the Tumblr-adjacent corners of the internet since 2016.

All of this begs the question: Where did the desirable goth girl in pop culture come from anyway? Is the “goth gf” merely a contemporary extension of the classic “femme fatale”? Or, is it actually the next, darker evolutionary form of the widely lambasted “manic pixie dream girl (MPDG)”?

It seems that the "goth gf" is our era's heir to the manic pixie dream girl—and this is a problem. As Nathan Rabin, the writer who first coined the term in 2004, wrote in a follow-up essay, the concept of the MPDG is intrinsically sexist. “It makes women seem less like autonomous, independent entities than appealing props to help mopey, sad white men self-actualize,” he wrote, noting the skewed nature of the power dynamic between an MPDG and her partner. “[It’s a] fancifully, if thinly conceived, flibbertigibbet who has no reason to exist except to cheer up one miserable guy.”

And it feels like this is precisely what Grimes has become to a certain contingent of Musk fans, who ardently cheer on their relationship as proof that Musk is just as "badass" as they think he is. “The computer science major's dream: A hugely successful and industry-disrupting company, and a date with that surprisingly attractive goth chick from class,” one Reddit user wrote. “Didn't think I could like Elon any more but he is into goth girls and I dig that,” another quipped. It seems that the main takeaway for many of Musk’s fans is that Grimes has given him cool points via association.

This also reveals what "goth" has come to mean in pop culture; it's dropped its more macabre associations and become synonymous with "alt," rendering the word essentially meaningless. In the same way the MPDG became so ubiquitous as to become irrelevant, now that the “goth gf” title can be applied to any woman with a penchant for black eyeliner and a slightly disaffected demeanor, the term has lost a sense of distinction and importance.

That said, Grimes does have her roots in goth subculture. However, it’s a disservice to distill her down into a single, poorly misunderstood concept, especially considering she has consistently had to fend off the reductive and “infantilized” way she tends to be treated (as well as the title “quintessential manic pixie dream girl of the synth-pop world”). As one of my friends joked via text, “u either die a MPDG or u live long enough to see yrself become a goth gf.”

But before memers come at me for being a wizened internet crone who can’t take a joke (however true), consider that women are reduced to fetishized archetypes on the regular. And, in this vein, the concept of the “goth gf” seems to be yet another assignation for “rare and highly desirable” women, per the Know Your Meme page. Altogether, it’s a joke format that feels insulting given who Grimes is. After all, why does she have to be Elon’s hot “goth gf” based solely on arbitrary personal style and aesthetic choices?

An intensely gifted songwriter who at one point was studying neuroscience, Grimes is weird, critically acclaimed, and terrifyingly brilliant—just look at the bizarre and esoterically referential way she and Musk reportedly met. She is also an autonomous adult woman with the agency to date whoever she wants. And while her fan base (myself included) is markedly less impressed with Musk than his followers are with her, it stands that, at the very least, she shouldn’t just be relegated to mere “goth gf” status in this or any relationship.

Since the tides of the internet aren’t realistically going to shift anytime soon, here’s a temporary solution for those of you tired of seeing Grimes reduced to “Elon’s hot goth gf”: The Chrome extension that replaces all mentions of “Elon Musk” with “Grimes’ boyfriend.” Enjoy.

NEXT UP
Entertainment
Gracie Abrams & Gia Coppola On The Joy Of Free-Flowing Collaboration
Entertainment
19 Niche Music Festivals For Every Type Of Person
Entertainment
Boygenius, LCD Soundsystem & Steve Lacy Are Headlining A Summer Concert Series
Entertainment
Chloe's "Pray It Away" & 9 Other New Songs Out This Week
Style + Culture, delivered straight to your inbox.