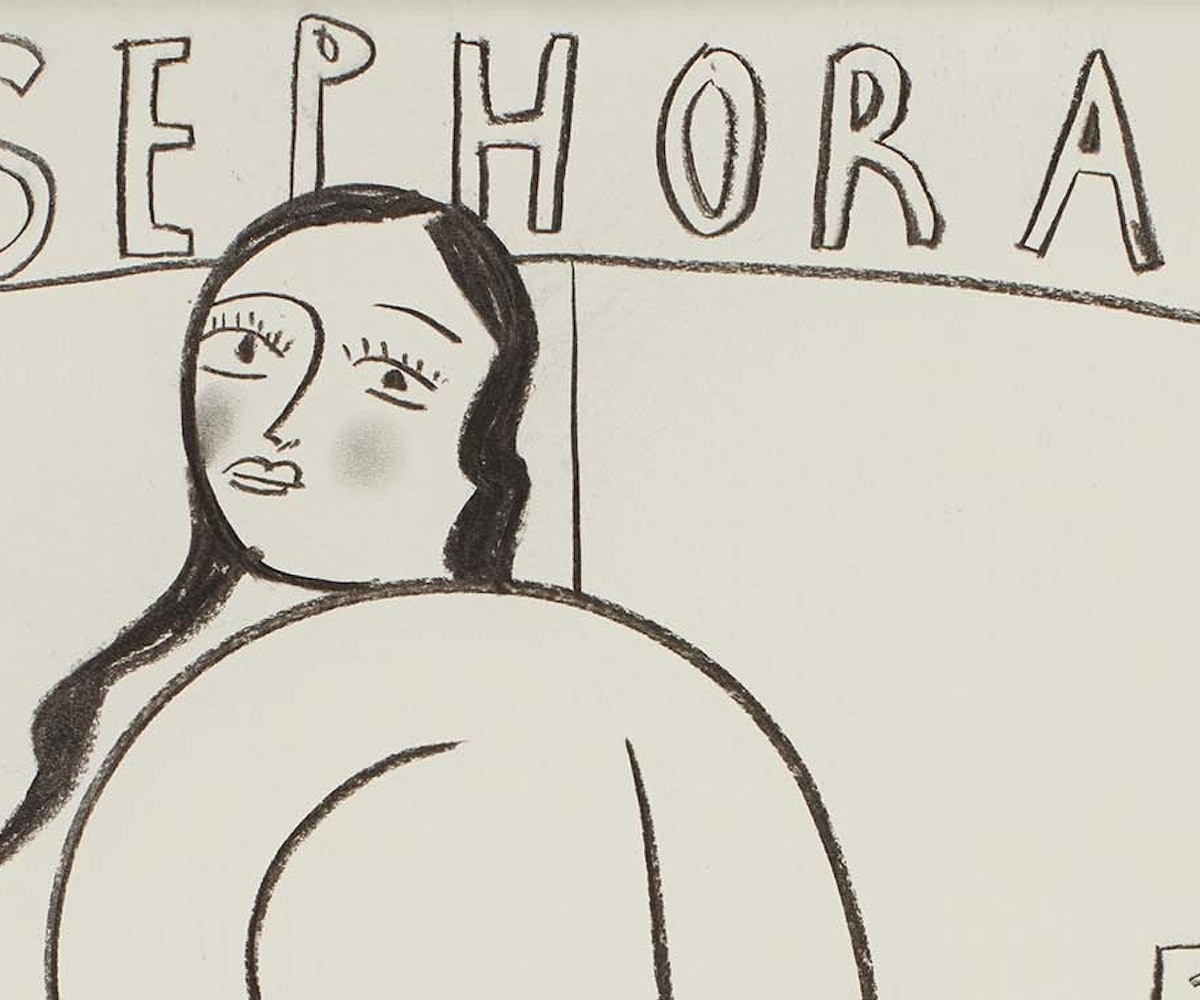 Figurative painting is having a moment, thanks to young women artists; Grace Weaver, a 29-year-old Brooklyn-based painter, is among this group, and notable for the specifically millennial perspective she brings to the form. Her bright bendy figures apply face moisturizer, cut avocados, attempt to listen to their boyfriends through their boredom. They are simultaneously an embodiment and a parody of life in 2018. Emphatically feminine, her work resonates with a rich knowledge of art history. Both Mannerist proportions and a pop art sensibility appear in her large-scale, confrontational pieces.

Her solo show, "BEST LIFE," opens today, September 14, at the James Cohan Gallery in New York's Lower East Side location and with it comes Weaver's moment to shine.

Below I speak with Weaver about "BEST LIFE," the dark (and funny) side of self-care culture, and memes.

Can you tell me about the idea behind BEST LIFE and why you chose that as a title?

Titling is the hardest part for me but I hope that a title can add one extra piece of the puzzle. A sense of time, or something like that. I like words that are strange and complicated and can go many ways. I wanted the work to have a connection to how people speak in 2018. I didn’t title it I’M LIVING MY BEST LIFE, you know? It’s just BEST LIFE. It’s a simple phrase that opens up the more you think about it. And maybe it’s just me, but I think there’s something kind of bizarre and maybe a little bit dark about the idea of living your best life. Like how much are we going to try to optimize our lives? It seems somehow to me exceptionally torturous to feel the pressure to live your best life.

A few pieces in the show, like "primer" and "ten-step" seem like a nod to the whole wellness movement.

Yeah, did you see that amazing piece in the Times about Gwyneth Paltrow and Goop [by Taffy Brodesser-Akner]?

She’s incredible. There are some lines in that about aspiration always being suffering or something like that. That is kind of a current that goes through this body of work too, because I think there’s something really interesting about what’s happening with the modern wellness movement. It’s supposed to be about "treat yoself" and empowerment, but I think a lot of it ends up making people feel miserable because there’s never a satisfying endpoint it just ramps up and up and up. I thought that was an interesting complicated space to be in with these paintings.

That piece is deeply funny. I feel like there's a similar element of humor in your work. Is that intentional or does it kind of just happen?

[Brodesser-Akner is] making herself just ridiculously vulnerable and there's a very honest humor to that. I think that [humor] is a big part of why I'm seizing on these really mundane subjects in my work. It's a statement to make a huge painting of something that seems as mundane as washing your face or something like that. I think the stuff that was so funny in that article had to do with her own failure to live up to it [the wellness movement]. On the surface so many of us are aspiring to optimize our lives, and inevitably there's the dark side of that, which is the failure and humiliation and awkwardness of not quite getting it right. There's a reason why the Gwyneth Paltrow stuff and whatever other trendy stuff is popular and I'm just as vulnerable to it as anyone else and just as ambivalent to it as anyone else. And I think that the combination of vulnerability and ambivalence is interesting.

Obviously your work is very 2018 in certain ways but it's also clear that you have an extensive understanding of figurative painting as a form and its history. What are your some of your influences?

In undergrad, I was studying biology before I got into art history and really had no painting or art history background. Some of the first stuff that I got really excited about was Indian and Persian miniature paintings and that still continues to have a huge influence on my work. Also Japanese prints and early 20th century French painting and Mannerism and Rococo. I love how communicative figurative painting is. I remember sitting in an art history class on Persian miniatures and there's some big, important scene from literature happening in the middle of the painting but in the background there are these little villagers making faces at each other and pointing and gesturing and having a funny little moment. There's something extraordinary about being able to understand someone across time in that way through tiny gestures and facial expressions. So when I started painting I was grabbing little moments from all over the place in art history and trying to build out my own vocabulary from all those things. I just knew that I wanted to make something that was aggressively communicative.

Why do you think figurative painting is having a moment currently?

I think things ebb and flow and it was kind of inevitable that there would be a figurative painting moment but I do think that there must be some relationship to social media and confessional media. If you just think about what's changed with how celebrities communicate with the wider world and how direct it is. I think for a whole variety of cultural and political reasons people just—we're kind of ready for a very sincere, sometimes dorky and sometimes empathetic moment in painting and in art in general.

Do you ever take inspiration from your Instagram feed or pop culture for your work?

Maybe this will sound crazy but I kind of think that memes are one of the most interesting visual formats out there right now. Five or 10 years ago did everyone know that nobody else really wanted to go out to the party and would rather stay home and watch reruns? So I mean, if I do take anything from social media, it's probably from the stupidest form ever, which is memes.