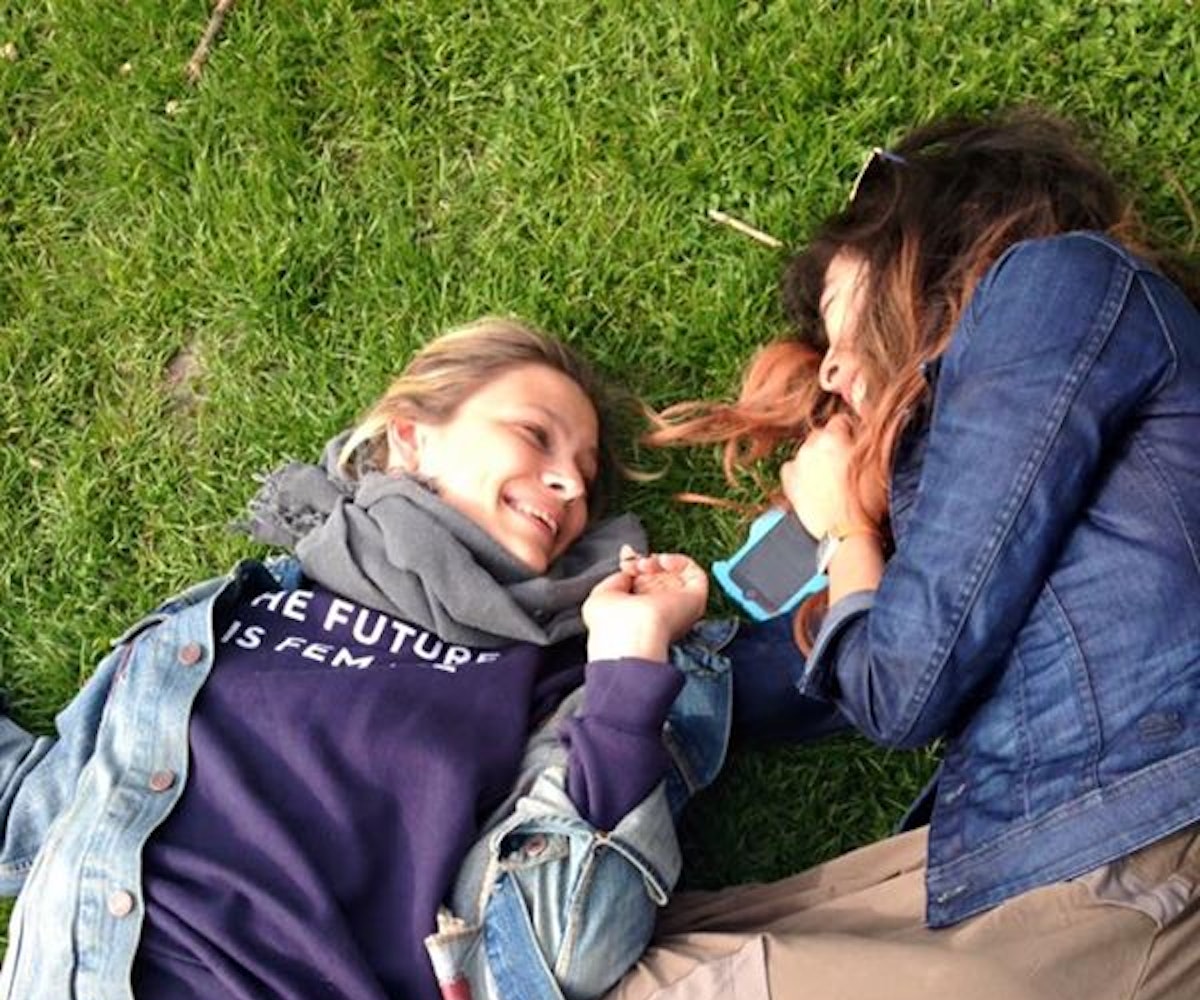 Over the past couple of years, #GirlSquads have popped up across the country, spouting a new movement of collectives that base themselves around everything from equality in the workplace to simply having a safe space to speak with other women about private topics. Confetti Crowd is a group of women made up of creatives in TV, music, and fashion; Nap Girls strives for equality in the music industry with members in areas like A&R and stage management; ReQuest is an all-female hip-hop dance crew. But there was one group that remained in the shadows until an event called Fuck Rape Culture popped up on Facebook following the Stanford rape case ruling. It was a viral success, with more than 1,000 people attending the Brooklyn, New York event, and suddenly, everyone wanted to know, who was behind this? Who was GRLCVLT?

While Crushee founder Annaliese Nielsen originally started GLRCVLT in L.A. in 2012, the New York City chapter was initiated by photographer Remy Holwick in 2014. A secret society in the truest sense of the term, it only exists in hashtags, private group chats, and IRL meetups. In an age where it's almost impossible to not leave a digital footprint, GRLCVLT manages to stay a whisper. There is no website, though there is a bowling league. No Instagram, but a monthly get-together at the Ace Hotel. Across the country, 6,000 women buzz about their internal channels on the daily, creating a cloak-and-dagger space where members are free to talk about everything from Tinder dates to feminism and their cats.

We decided to sit down with Holwick and fellow GRLCVLT member Jenny Pien to talk about why this hush-hush sisterhood is necessary, coming out of the shadows for Fuck Rape Culture, and starting a secret society of one's very own.

Why choose to not have an online presence and be a secret society?

Remy Holwick: So GRLCVLT started because an even larger group of women—which was also secret—didn't feel intimate enough. We wanted a chance to be able to talk about all these varied aspects of our lives without people like parents, employers, and friends, necessarily seeing it.

Jenny Pien: Also, being secret means that the pool of women that are suggested have previous relationships with the ladies in the group and are vouched for. I think it provides more of a safe space.

RH: Because we don't have a "topic" and we aren't an interest group, there's a huge array of discussions going on concurrently, and you don't want the world to see if you're asking about a yeast infection or how to leave your job or why your pee smells. It's a culture of "Thank god I didn't post that on normal Facebook!"

JP: It's more of a girls' chat... I didn't have a lot of girlfriends before these groups, to be honest, and I've never been able to share things and be a part of things that I may have ignored previously.

It's a "girls' chat" that has become topical...

It has become topical in the media for sure. We band together to do things, like

, we all got behind the idea of "Let's talk about rape and start working to undo some of the societal garbage around it." When you are in the group, it's a hugely mixed bag. We have underpinnings—we're founded on intersectional feminism and undoing the belief that you have to put other women down to bring yourself up—but topically, we go everywhere from "Look at my boobs, I love them!" to "Let's talk about the time I was sexually assaulted" to "I need a new job" to "Is my mom weird?"

Like in any group, some important social issues will arise in conversation with friends, but within a group like ours, we have a lot of resources and dedication.

Was the Fuck Rape Culture event the first time GRLCVLT had done anything publicly?

What was it about the Stanford case that made you decide to take something that was previously exclusively secret and bring it to the public?

When the case broke out, a lot of our community was affected by it.

I think it was a point where we got sick of seeing the news and thinking, "I want to hide." This is a women's issue, and we are women, and here was something that had happened to a

of us, and it wasn't partisan, and it was something we united behind. Instead of hiding, it felt really important and really good to get out there and use our voices, steamrolling the problem rather than letting it steamroll us.

I think there is a lot more thought into how we can use our voices to do more, whereas previously it was more friendship sharing.

The turnout was immense, what tangible change did you see from it?

There were around 1,000 women at our event, and another 1,000 in L.A., and I think 700 in San Francisco. Those numbers and the media coverage we got, which was huge, put a human—and young—face on the recall effort against [Judge] Aaron Persky. After that, we had businesses contacting us asking how they can help fundraise for the recall campaign. In California, judges can be recalled by ballot initiative, which means the initiative gets a campaign just like a politician. So on that front, it turned a lot of eyes to that campaign. His recall is super-symbolic and has the potential to be a turning point concerning rape sentencing and the way that law enforcement approaches rape. Women showing the power to take a judge off the bench if he doesn't take us seriously is real change, and we're doing it. We need to push this all the way. If we just raise our voices once and then settle down again, no one's job is threatened, and we say, "We don't like it, but we'll take it." Once judges start losing jobs, I hope it sends the message that the tide is turning.

I want to go back to something Jenny said, that she previously didn't have many female friends.

Oh, yes. I had a hard time making friends because I had been moving a lot in the span of five years. A lot of my core friends had dissipated due to careers and life. Finding a group like this really opened my life up.

Same. I had also learned to be competitive with other women, that being "not like all those other girls" was something I was supposed to strive for.

Yes! There's so much competition and tearing down of each other, and now it's so obvious to me that it's useless and that energy can be redirected. I've become much more open friendship-wise and I think overall more friendly in general. This group has really reset my views on friendships with women.

It's misogyny that we're taught to inflict on each other at a really young age. Like, Cinderella gets to win the prince because she's not like all the other girls.

What was your view on friendship with women?

Maybe six years ago, I was very "Oh, girls are

drama." And now I hate myself for that.

Me too. And that's so not true. We're exhausted by a society that teaches us to compete with each other, but we aren't drama. A lot of the group teaches us to undo that and trust each other. I

that when I was little, I genuinely learned from the media that girls were boring. I dreaded being a woman.

I didn't understand being a "woman." I still don't.

I thought women were embarrassing.

But here's my thing... All my life I've been told I'm weird, that I need to change and be regular, that I should be more like people around me, that I'm not ladylike or all these things. This group has made me feel so... normal.

I feel the same way. I felt like a total misfit, and then the groups happened, and it was all, "Wait, we're all like this, we are so normal!" It feels like we're all growing together and realizing we all have a ton in common even though we come from radically different backgrounds, and that's amazing.

Are there plans for additional GRLCVLT events?

Yes! We're about to announce a fundraiser at Baby's All Right on August 1. And then for our girls, we throw a ton of events. There's stuff going on every weekend... but that's between us.

What would you say to someone reading this who feels like an outcast or like they don't connect with other women?

Two things. First, if you feel like a group would benefit you, make the effort. Make a secret group, invite 10 people you trust, and ask each of them to invite 10 people. Second, make the effort to approach women with trust. It takes a lot of undoing because society is really fucked, but it has to happen in every one of us, and that means you have to start somewhere. Know that there are people out there who want and need to undo all this weird stuff just as badly as you need to benefit from it being undone.

Yes! The second one: Before I was added to the group, I would push myself to try to talk to women and found most were friendly and happy to make friends. I would say, "Remember that most people are like you inside, they are also anxious about things and looking for kindness." We have a monthly mixer, and I remember I went to one when I first flew in from Hong Kong, and I was like, "How do I talk to these women? How do I approach them?" I literally just walked up to a girl I kind of recognized from the group and introduced myself very awkwardly, and we just started laughing together.  I’d never felt that before... stranger/non-stranger friendliness.