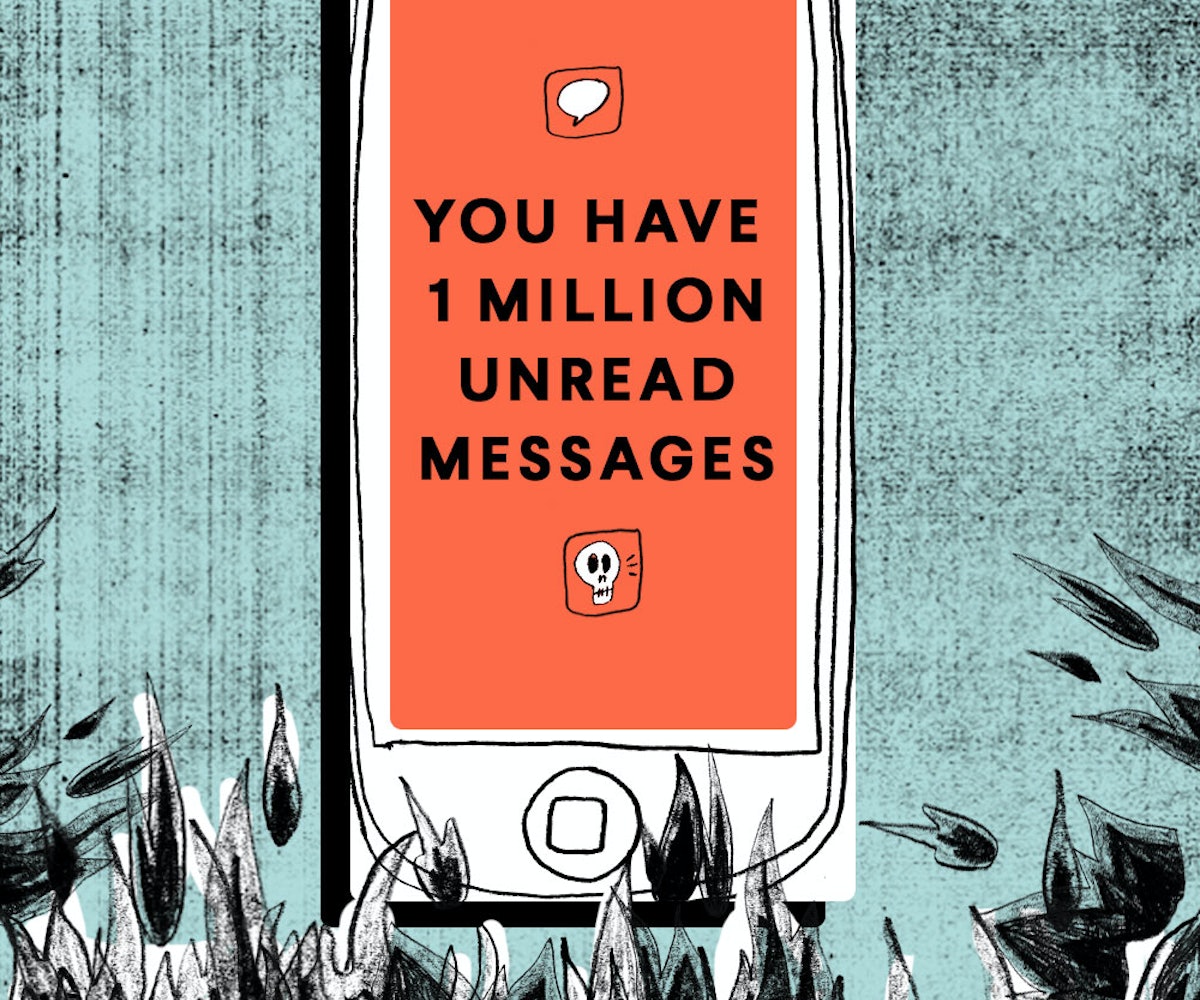 Sometime in the last year, I stopped texting my close friends individually. Instead, I’d hit them up—to share a thought, a meme, a picture of my lunch—on a group thread. The thread had to be at least three people deep, myself included (two people and it’s no longer a thread), but it could stretch as far as eight or nine people. Even if my intention was to address only one person on that thread, the message was sent to everyone, and anyone could respond. And they often did, which meant that my message set off a chain reaction of texts and responses that could eat up five or ten minutes of the day in a scary-fast instant. Multiply that by the 10 group threads, and it quickly became a problem.

I can’t really place when the whole group text phenomenon emerged. It didn't feel like a thing just two years ago. Back then, I had one group thread that lived on Facebook’s Messenger app. It was me and five close friends, most of whom were scattered across the East Coast. We used it to stay in touch through bromantic, joke-splattered conversations about how much we all loved each other and how great and vital the thread was. It became like a 21st-century clubhouse, and it was a great comfort knowing that five of your closest friends were always in your pocket. We called it “The Thread,” and we were all “members of The Thread.” On the rare occasion that the five of us found ourselves in the same city, it was cornily dubbed “The Thread Reunion.” I became so reliant on it that other friends became aware of it—and suspicious. “Did you just send that to The Thread?” they’d ask whenever I sent something to the thread. It had become a sacred space to share my inner thoughts and deepest secrets with those who knew me best.

But now I have like ten of those, and the threads keep growing. They pop up like heads on a Hydra, every time one gets chopped off, another takes its place. And that Hydra is reigning hellfire all over my social etiquette. Before the age of group threads, staying off my phone around flesh-and-blood humans was already a challenge. The temptation to check social media or respond to texts posed its own set of problems. Now my phone feels like a switchboard with multiple conversations crisscrossing through it all the time. If I leave my phone unchecked for an hour, it could easily accumulate 100 text messages, only a few of which directly address me. And then, of course, I’ll spend the next five minutes reading all of them. It’s a criminal waste of time, but I can’t help my need to keep up with those conversations.

The original FB Messenger thread is still going strong (with three new members since its original incarnation) and has been joined by about six iMessage threads that I use regularly. I don’t have a Whatsapp thread, which is popular among the international crowd, but I have started using Instagram threads to forward eye-catching posts directly to my friends. Needless to say, it’s a lot.

But I’m not alone in this affliction. My friends, some of whom I share multiple threads with, are dealing with it too, and it’s affecting their relationships. “My girlfriend and I went to a wedding last weekend, and she made me turn my phone off for the entire day,” one friend told me. "It's actually becoming an issue." Someone else very close to me got a strongly worded email, also from his girlfriend, warning him about his excessive cell phone use. She didn’t single out the amount of time he spends responding to group threads, but they were clearly to blame (along with an unhealthy dose of Twitter).

But group threads don’t have to be a lightweight distraction. Sometimes they can come in really handy. They don't necessarily have to just eat up all your time and cut you off from the real world—they can also make life a little easier. Threads make figuring out a night on the town or coordinating a weekend upstate a more efficient process. Just this week, a new thread was created to plan a weekend getaway with multiple friends. What was once a scattered and incoherent process, became simple and swift, and we now have a house in the Hamptons waiting for us this weekend. The problem is that while the plans have been set, that thread is still very much an active volcano, sporadically erupting with memes and sarcastic remarks. Even as I write this sentence, it’s popping off.

I've never considered leaving the thread game entirely—that would be crazy—but I have imagined a life with only a handful of them. On an iPhone, ditching a thread requires you to "Leave this Conversation," but the conversation doesn't stop simply because you left. It goes on without you. That's what group threads are—continuous conversations with your closest friends. In a world where everyone is busy and wrapped up in their own lives, that, at the end of the day, is a valuable thing.