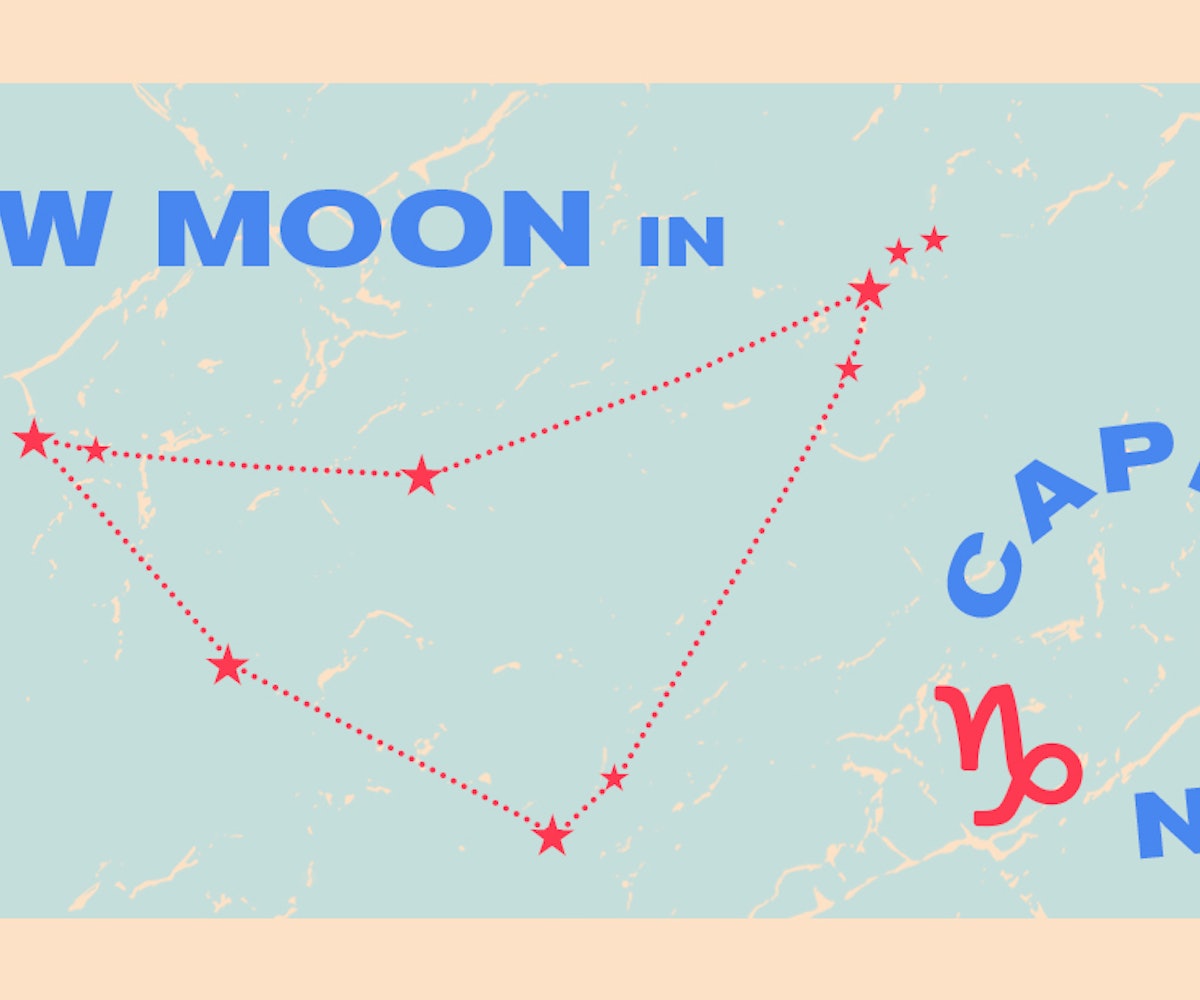 It’s time for the new moon in Capricorn, and if you change one thing about your behavior under this lunar influence, it should be your reluctance to change. For those of you who consumed media in the dawn of MTV’s The Real World, the phrase “when people stop being polite and start getting real” will have a very particular resonance. It was the beginning of the reality boom: seven strangers in one house challenging each other’s dignity and humanity episode by episode. We all know that strong personalities make good TV—just their presence can radically shift a plot line. And when it comes to planetary aspects, a similar dynamic is at work. All to say, even if you think you know what happens when the Sun, the new moon, Mercury, Venus, Saturn, Pluto, and the asteroid Vesta all get together in Capricorn’s House, well… you have no idea.

This cast has all kinds of chemistry on the intergalactic screen, and some of it is bound to end up in smoke. The Sun can't relax in Capricorn, he's got to stay up and alert, ready to assert himself if any changes come to pass without his approval. He's never quite sure he's doing enough and would rather err on the side of doing too much. The new moon might look like she's keeping her distance, but she's really drawn to the Sun and all his Daddy drama. She knows if she plays her cards right, she can get help actualizing her dream project, something Sun in Capricorn loves to work on. The new moon has been spending a lot of one-on-one time with Venus, and something about that girl really turns the moon on… not that she's ready to admit it. She is, however, starting to realize that her sex life could use a little less convention and a little more experimentation. There’s this irksome guy named Uranus who lives across the way, and he’s got that Rebel without a Cause appeal. Totally trouble.

For viewers at home, our creative lives weave tight with our relationships, we want to bring the old into the new, shake things up safely, define Eros so that it walks hand in hand with consent. We want our professional lives to not only give us a deep sense of purpose but allow us to walk our path with self-respect. This is not easy in the midst of critical feminist backlash, but Capricorn doesn’t care about the easy way and never has. The hard way is one in which Capricorn shines, scaling that vertical mountainside in high hoofs.

Mercury in Capricorn isn’t interested in getting messed up with whatever’s about to pop off. Mostly, they’ve been keeping their head down and making lots of contingency plans for when everything blows up and there’s no money for pizza. Sometimes, at the end of the night, Mercury has been known to sulk gently in the corner and call everyone a “phony” in a way that seems almost tender. Our relationships, friendships, partnerships are of the essence, and they demand nurturing. Contracts are popping out of the woodwork. Let your commitments stand alongside your desire for self-actualization. It’s okay to be inventive, it’s okay to say “yes” in a way that’s entirely new to you. Saturn who—plot twist—governs Capricorn, probably doesn’t love all these big personalities hanging out in her house. But, she’s sort of resigned herself to the nuisance and is trying to get as much work done as she can, usually waking up early to do it. Many of us will feel in overdrive this week—so much to do, so little time to do it in! But that's okay: The new moon is a good point to write everything down and plan out your next steps.

Pluto is that character people keep forgetting lives in the house. She uses this to her advantage, strategically leaving useful triggers, pamphlets, and damning evidence around that could serve to get everyone out of her way and possibly into trauma therapy. Sometimes she convinces herself it’s because she’s a healer. If everyone seems to be moving forward while you stand still or, worse yet, seem to be falling back, consider that you might be much more attached to the weight of the past than the past is attached to you. Consider ways of letting go.

Vesta, an asteroid, is really hoping that despite her general reluctance to sleep around or get wasted, she winds up making some fun connections. Viewers might wonder why Vesta is interested in connecting with people that share none of her interests, but they must remember that the goddess of the hearth makes a commitment to whomever she hosts. She loves to take care and be of use, especially when in Capricorn. We all know new friendships can be a delight, but not if they take away more from you than they add.

When people stop being polite and start getting real, they might not know what reality will cost them. After all, Capricorn’s influence on our featured planets might have us choosing integrity over gentleness, as if these two qualities can’t coincide. If there are people that surround you with whom you don’t agree, now is the time to ask yourself what brought you to them. Under the new moon, you can control your need to feel control or you can leave and begin again. Don’t you know that Capricorn has, on occasion, made the mistake of choosing stagnancy and narrow-mindedness in the face of the unexpected? It’s easy to confuse false pride for intuition when your intuitive compass has been dinged a few too many times by bad relationships and broken contracts. When you get real, don’t forget you’ve got to get real with yourself. This night is the darkest it will be all month, the planets move forward on their path, and we are below them—watching—willing ourselves to move forward, too.