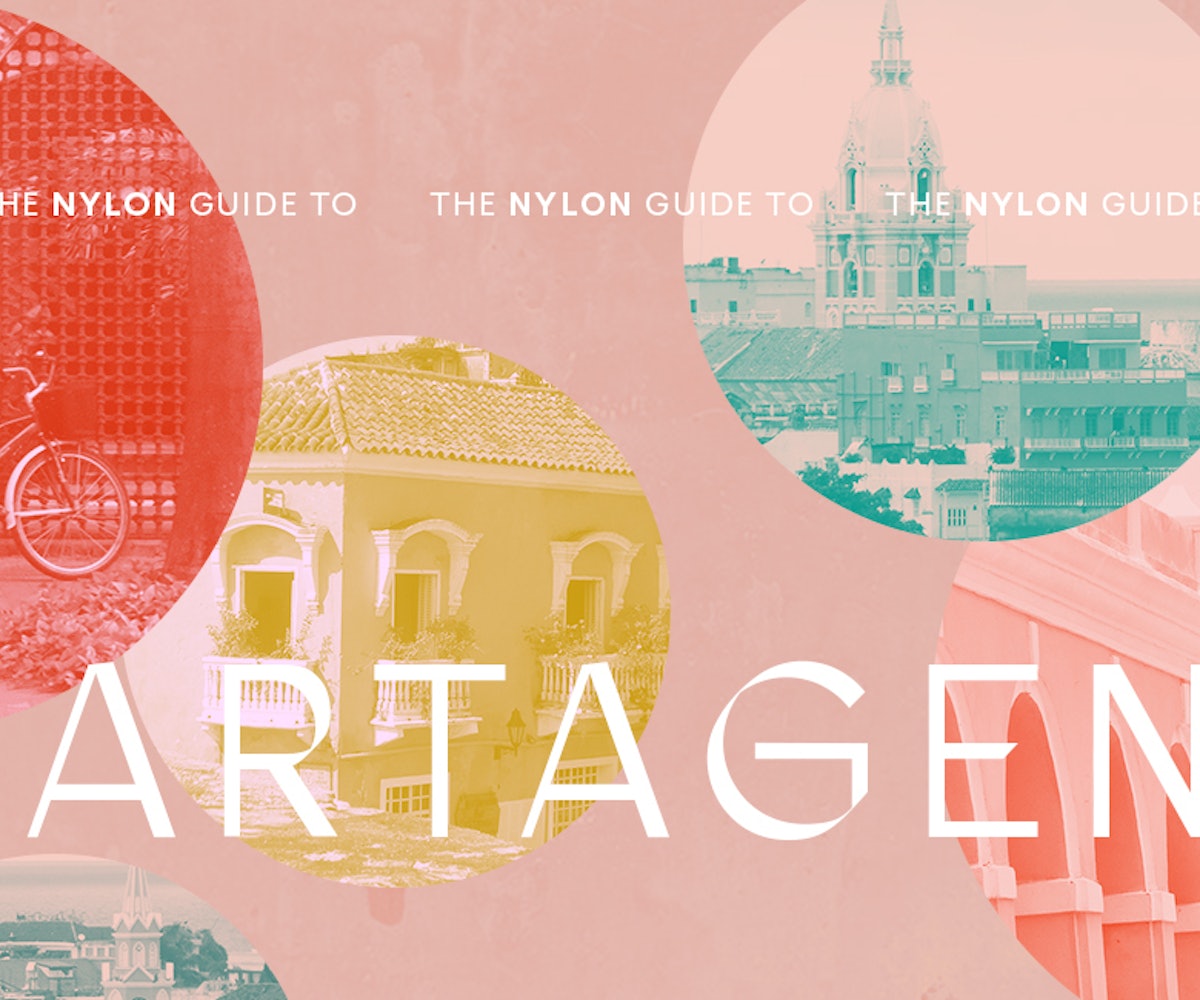 Known as “the jewel of the Indies,” Cartagena is undoubtedly Colombia’s most popular destination. And with colorful city squares, colonial-era architecture, quirky shops, delicious restaurants, and the historic walled old city with fortresses dating to 16th century, it doesn't take long to see why. Situated on the Caribbean, on Colombia’s northern coast, Cartagena makes it easy to get lost in its charming pastel-hued streets, swim for hours in its azure waters, and eat one's way through the best ceviche you'll ever have. With dancing and live music on the plazas at all hours and bustling street vendors crowding every calle, the sights that inspired the magical realism of Colombian literary hero Gabriel García Márquez—whose writing was inspired by Cartagena, where he lived briefly—are still present on every corner.

To get the most of this of this enchanting city, read our guide to where to stay, eat, drink, shop and what to do when visiting Colombia's crown jewel.

Typically, the history-loving tourists either stay in the old city, the skyscraper-filled Bocagrande, or the up-and-coming Getsemani, while the beach-seeking ones stay in nearby, shoreline-adjacent neighborhoods like Manzanillo del Mar and Punta Canoa. No matter your preference, there are plenty of options in boutique, budget, and luxury categories for every traveler.

Conrad Cartagena: If you're leaning more toward a beach vacation, look no further than Colombia's first Conrad hotel that just opened its walled city-inspired front doors this past December. In addition to having prime beachfront location on the Caribbean Sea (all 268 rooms and suites overlook it), the stunning property holds four swimming pools (including one located in the beach club and overlooking the sea!), seven restaurants and lounges, a 24-hour fitness center with yoga and spin classes, and an indoor and outdoor spa that offers indulgent ancestral treatments including volcanic mud wraps and Caribbean scrubs. Part of Hilton's mission to reduce its environmental impact by 50 percent by 2030, Conrad is the only property to run on rooftop solar panels in Cartagena; it also works on various social initiatives that range from recycling leftover soap to working with local artists, fisherman, and farmers to ensure that it's supporting local communities. For those wanting to explore the historic side of Cartagena after a few days of pure bliss, there are four shuttles available daily to take guests to the walled city. The hotel also offers 1, 3, or 5-hour program itineraries, that include everything from an informative historic tour to local-led food, shopping, and art tours.

Casa San Agustin: If you want to stay in the historic center, check into this boutique hotel housed in restored colonial-era buildings that feature contemporary amenities, including an L-shaped courtyard pool (built beneath the walled city's original aqueduct), spacious rooms with marble bathrooms and tech capabilities, and a spa with a hammam. Bonus: Alma, the property's very good restaurant, is a draw in its own right.

Biblioteka: Your donde esta la biblioteca-level Spanish will actually come in handy at this chic Asian-European-Latin America fusion restaurant that puts out flavor-packed and elevated dishes like tuna tartare with watermelon crystals, beetroot salmon carpaccio, duck magret with foie gras, and arroz meloso and is decked out in books that you can request to read during dinnertime. Veggie-lovers will appreciate a selection of exciting vegan and vegetarian dishes, like the incredible patata (yes, not patatas) bravas amuse-bouche, mango biche tempura, and mini veggie paella, somewhat of a rarity in a carnivore- and seafood-loving country.

Ceviche: You can stay in Colombia for weeks and eat nothing but ceviche the entire time—it's that good and offered everywhere. You can't go wrong with La Cevicheria, which Anthony Bourdain skyrocketed to fame, and which serves all-around-favorited fish, octopus, and shrimp varieties. For something a little less traditional, try El Boliche Cebicheria that puts out innovative takes on the Caribbean staple with a coconut version and a breaded squid, conch, and mushroom blend.

Maria Bonita: Take a break from the Caribbean-Latin American cuisine at this Mexican hideaway in the hip Getsemani neighborhood. The restaurant, that also has an outdoor patio with an Instagrammable flower wall, is decked out in artwork depicting Frida Kahlo and makes the most delicious octopus, shrimp, and meat tacos served with a platter of homemade salsas.

Oh la la: Run by a French chef, this healthy restaurant will serve as a welcome break from all the fried food you'll have in Colombia while still offering a taste of the local cuisine. Some of the highlight dishes include the freshly baked bread, ceviche, chicken in coconut milk, and Colombian cheese and yam soup. Note: The restaurant also offers cooking classes for those looking to learn even more about the region's culinary traditions.

La Paletteria: Good luck picking out what you want to try at this popsicle shop that offers flavors ranging from maracuja and mora roja to salted caramel and tres leches.

Absenta Bar: You might feel like you've had too much of the green fairy juice before you even have your first drink at this exceptional cocktail bar, which has chairs, saucers, and top hats hanging from its ceiling and a bar made of books. Try one of its signature absinthe cocktails made using traditional methods that involve burning a sugar cube over a spoon.

Epoca: It would be borderline sinful to go to Colombia and not try the coffee. Do so at this espresso bar known for its ritual-like filtering techniques (that amplify the intensity of the flavors) from the mountains of Tolima, Quindío, Santander, and Cundinamarca.

Cafe Del Mar: This is a tourist trap for sure, but, also, you're a tourist, and when else are you going to be able to sit on the remains of a historical defense wall while overlooking the sun set over the Caribbean Sea and drinking rum? So embrace the tourist label and just do it.

Demente: If you heed our advice (and you really should!) and end up at the aforementioned Maria Bonita, stop by this next-door bar and tapas restaurant that retains the walls from the 18th-century ruins from which it was built. The pintxos and pizza made in its wood-fire oven are very good, but even better is the beer garden in which you can sip on local brews as an incredibly well-curated music lineup plays in the background.

El baron: Considered one of the best cocktail bars in the city, El Baron infuses its own liquors and makes its own syrups. You really can't go wrong with any of its drinks, but for photo ops, try one of the tiki mug concoctions that this cozy bar offers. Don't be intimidated by the lack of space when you first enter—there's an outdoor area.

Malagana: Another Getsemani favorite, this restaurant-bar owned by two sisters serves some of the most delicious frozen margaritas you'll have in the city. Grab one of the round tables on the mosaic-tiled rooftop patio—a setting that looks plucked out of Santorini—for the best seats in the house.

Son y Ron: For a true Caribbean experience, grab a couch at this bar whose doors open to an ocean breeze, order a selection of rums (Son y Ron carries several rare varieties), and listen to the live Cuban band that takes over on the weekends.

Abacus Books and Coffee: While the selection of English books isn't very large (in fact, it's just one shelf), it's the atmosphere at this bookshop-coffee house that earns it a spot on this list. Listen to jazz as you sip on a delicious cup of cold brew and read Márquez's Love in the Time of Cholera.

St. DOM: This fashion-forward concept store is often mentioned in the same breath as Opening Ceremony and Dover Street Market. Carrying everything from clothing and jewelry to books and housewares, this hip boutique should especially be noted for its selection of Colombian designers like Mercedes Salazar, Johanna Ortiz, and Amelia Toro.

Casa Chiqui: Decor aficionados won't be able to resist the curation that is Chiqui de Echavarría’s design and home goods store. Expect to check your bag(s) at the airport with Casa Chiqui's selection of boldly printed throw pillows, locally made Werregue baskets, and decorative ceramics.

Loto del Sur: From the outside, this beauty store looks like an old French pharmacy with cloche bell jars covering a selection of candles and a glass display of blocks of soaps. Everything, from the bath salts and scrubs to lip balms and creams, smells delicious and is plant-based and natural.

Markets: Some of the best shopping takes place at the many bustling markets. Stock up on Panama hats of every variety, striped espadrilles, decorative figurines, and mochilas, popular colorful woven bags with geometric patterns that are everywhere. And don't forget to haggle.

NH Galeria: Get to know contemporary Colombian artists at this gallery located inside the walled city (with a second location in NYC) that holds paintings, sculptures, installations, and photography.

Islands: Hopping las islas is a must when in Cartagena. Rosario Islands are the most popular in the area, with plenty of day trips available (though you can also explore on your own) to the 30-island archipelago surrounded by picturesque azure waters popular for diving, snorkeling, and scuba diving and white sand beaches.

Listen to music: As one Colombian told me while I was in Cartagena, Colombians can't hear a beat and not respond to it by stomping a foot or moving a hip. Stop by any popular nightclubs like Café Havana, Bazurto Social Club, Quibra-Canto, or Donde Fidel to listen to salsa, vallenato, and champeta, and you'll feel the same way.