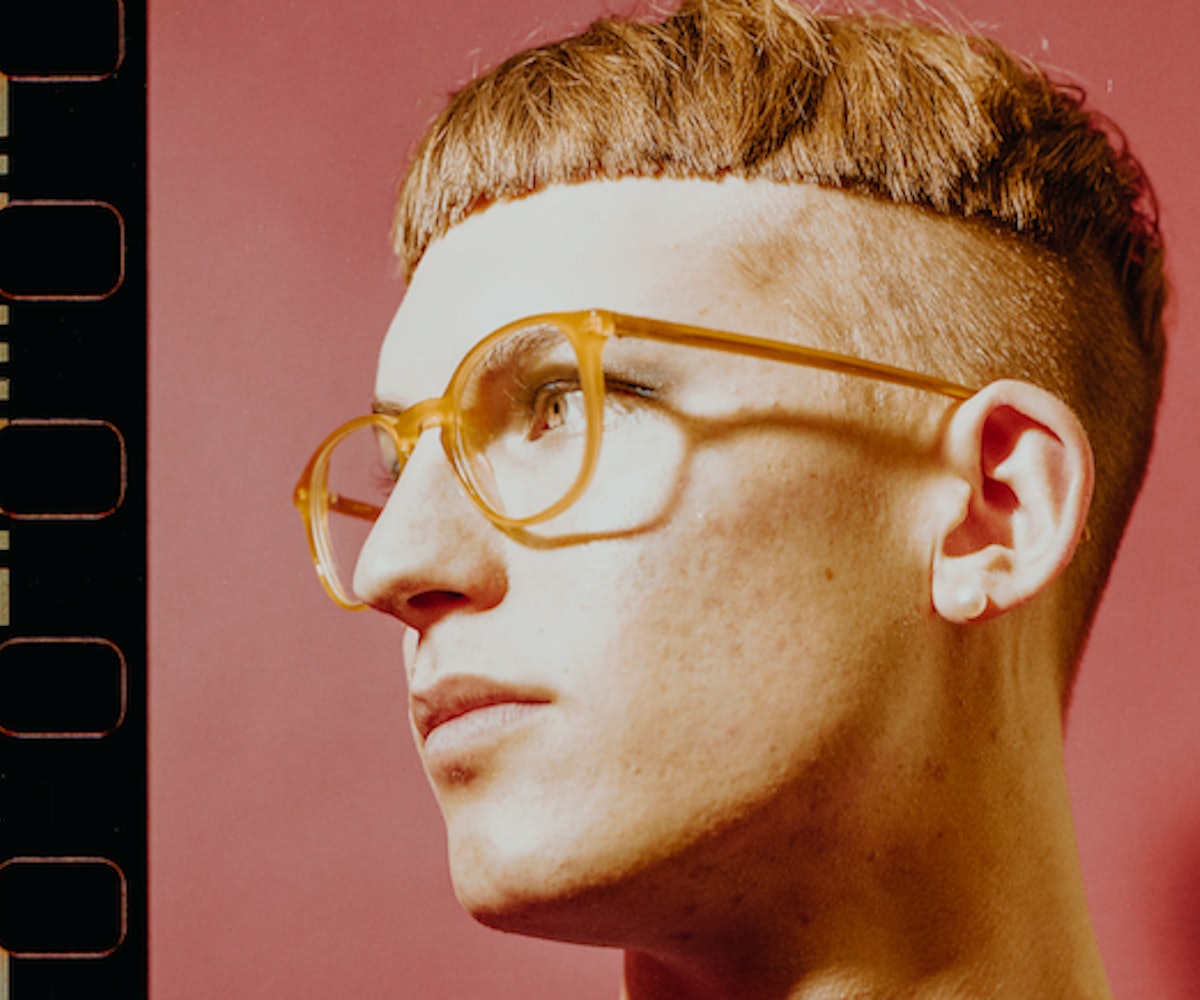 Since the release of Gus Dapperton's hit single, "I'm Just Snacking," in 2017, the artist (whose real name is Brendan Rice) has been making waves not only for his infectious lyrics, raspy vocals, and definitive sense of style but, also, for being unapologetically himself—and for having really great taste in stage names.

Well-known for his iconic bowl cuts, love of high-water pants, expertly applied eyeshadow, and signature dance moves, the 21-year-old Warwick, New York, native is here to let us know that he's unafraid of breaking the mold and being true to who he really is. And in a world where conforming to accepted standards can sometimes be the easiest way to succeed, Dapperton's music and image are hopeful testaments to maintaining individuality whenever we can.

Dapperton's music taps into the dreamscape of his mind and explores wider themes of love, friendship, and heartbreak lingering underneath a shimmering veil of poppy synths and ‘60s-inspired guitar. The mission? Making sure he stays as true to his vision as possible.

I was able to catch up with the musician before his first headlining tour about what inspires his music, what influences his color-filled aesthetic, and what his hopes are for his bright future. Get to know Dapperton and learn all about the budding visionary, below.

What are the origins of “Gus Dapperton” as a stage name?

You've been singing for about three years now, but you've been writing songs since you won a songwriting competition in middle school. What caused that shift and how did you find your voice?

In high school, when I was 17, I went through a dark period in my life. I tore my ACL and I was out of school for a really long time. It was a very sad, dismal time in my life and I think, by the end of it, I just began to come to terms with reality: In order for things to be pleasurable, things have to be un-pleasurable, and it's just the cycle. I started cherishing all those dark moments because, in order for there to be good things, bad things have to happen. After that, I was really determined in showcasing stories through my own voice. I started singing and by the time I put in the effort, I had started making music.

Can you describe your songwriting process?

I would definitely say that I'm more of a songwriter, producer, and a lyricist, as opposed to a singer and a musician. When I first started making music, I was pretty drawn to hip-hop beats wrapped together with super-good lyrics. The most important thing in that is wordplay, so that stayed with me when I started writing songs. I come up with a phrase, or I would hear a phrase and write it down in my cell phone or notebook. That moment in time triggers a melody in my head and the layout, and then I'll come up with the arrangements for the rest of the lyrics. Usually, it always starts out with a thought or phrase that hovers around in my head, or a phrase that summarizes a moment in time, and I build the rest of the song from there.

Who would you say are some of your music heroes, and how have they contributed to your overall sound? Is there a specific era in time of music that you identify with more than others?

A lot of artists have a super-specific musical hero they definitely try to hone in on. I'm basically inspired by everyone. I don't have one particular artist who I'm super-obsessed with. I obsess over a lot of artists, so I guess musical influences for me are David Bowie, Brian Wilson from The Beach Boys, and MF Doom. I'm also inspired by writers and filmmakers when it comes to storytelling. When it comes to my sound, I'm inspired a lot by '60s rock and '80s New Wave, too.

Recently there's been a massive wave of DIY musicians making amazing music from the comfort of their bedrooms. I know that you often self-produce from your apartment, so I am wondering why do you feel like it's important to produce your own music instead of having a large team to help you out?

I think I have a super-specific vision when it comes to my own music, so I don't think I'm really ready to collaborate and work with other people. My preferred means of accomplishing my vision is by myself. I think it's the only way I can do it. I know exactly how I want to make my music, and I think only I can accomplish what's within my head, so that's why I work on my own in my own environment. I went to school for audio engineering and I was around a lot of sound engineers over the summers in New York, so I'm pretty comfortable in engineering my own stuff. When it comes to the music, I'm pretty keen on just doing it myself. I think that's actually something that I have to get better at, opening up to working with people, because there's definitely other people who are way better at doing things than I am, so that's something I'm going to try and work on for a little bit. I still have a lot of things that I wanna figure out and accomplish musically. I think once I do that, I'll be ready to collaborate.

What influences the cinematic quality of your music videos? They often feel like mini-movies.

I would have to say that I owe and attribute that to the relationship I have with my director, Matthew Dillon Cohen. I found him, and he really wanted to make videos, and I really wanted to make music videos, too. I discussed my vision, and we've been best friends ever since. I think the amount of time we spend on creating an idea is much longer. In the process of working on a song, I'll show it to Matt and I'll explain the analysis of the song out to him, and he'll start coming up with ideas over the course of six months for each video. We'll come up with an idea, and it'll keep growing and growing until we finally act on it. I think it's the amount of time we spend together, and we have the same taste, so that just becomes more of a specific environment. We try to create an environment that you might imagine.

I think that's really cool that you have more of an intimate process with making music videos.

It's the same way with the music too. I never really have a release date for anything, I'll just work on it until I think it's done, and until he [Cohen] thinks the visuals are done. We come to a conclusion that we think is exactly what we want and are happy with, as opposed to other people having a certain amount of time to do things, which is good sometimes to have a deadline, but this is more of an organic process.

One thing that's super-unique about you is your sense of style. Does wearing women's clothing or dressing in bright colors impact your music in any way? How does your visual identity translate into your musical identity, and vice versa?

When it comes to cross-dressing in women's clothing, I don't look at it like that, more so whatever I think would look good on me. Half of my clothes are women's clothes, and half of my clothes are men's clothes. I like what I think looks good on me, and sometimes one of those sections will offer more than the other one. When it comes to the visual identity coinciding with my music, I say it weirdly represents my music pretty well because my music inspirations and sound derives from when I was a toddler and the influences that I grew up on. My style also is representative of what I wore a toddler when I actually was a toddler... just colorful things and how everything fits me. I always wear high-water pants and simple clothes with no graphics and no brands, just colors.

How do you manage to stay true to yourself in an industry that often rewards artists who have a mainstream image?

Once I came to terms with reality, I became very comfortable with being myself, regardless of what that entailed. I've had a vision since then and I know exactly what is in my head, what emotions and experiences trigger melodies in my head, and I transcribe that into music, and nothing could ever change that or tarnish that. Making music is the only way I can survive. Being myself is the only way I can survive. If I didn't, I would spontaneously combust. Nothing will ever teeter away from that. I was always like, "Quality will stand out." If you want to listen to it, you can listen to it. If you like it, you like it. I would never curate something that wasn't entirely true to me, or a true sound to me. I'm just pretty focused on the present and making and accomplishing what's in my head.

How do you try to challenge yourself as an artist? Is it always trying to stay in the pursuit of being as original and authentic as possible?

Challenging myself as an artist is just making good music. With originality and authenticity, I'm not trying to stay true. It's something that’s inevitable. Challenging myself as an artist is just trying to produce the best music that I can and just getting better at being a musician, being a producer, being a mix engineer, and being a performer, and just trying to train myself in the best way that I can.

Do you find it annoying or irritating when people try to place you into a specific genre of music?  If you could create your own genre to give your music a special name, what would it be called?

Yeah, sometimes. I just say that pop is such a broad category that you could put my music in, but if I could choose any sort of genre, I would say surrealism. That's more of what my music is based off; it's based off dream worlds and fantasy. That would be a cool way to define music, like realism or fantasy. I'll stick to surrealism as the genre. I think it's a really broad category and it explains what my music is inspired by. The rest of the genres are indie or alternative. I don't really like how all those terms have kind of curated a very specific theme or image when you hear those words.

What can fans expect from a Gus Dapperton show?

Wholesome communication between me and my band. They can expect a good performance. We have fun every time we go up on stage because we're living our dreams. I'm definitely working on being a better musician with live performance and I'm not shy about it. We just have the same humor and are always really excited about being there and performing for everyone, regardless of what the show might turn out to be. Every time we go out there, it's the best time of our lives.

What can we expect from you in the future, and what are some goals and aspirations that you have laid out for the rest of 2018?