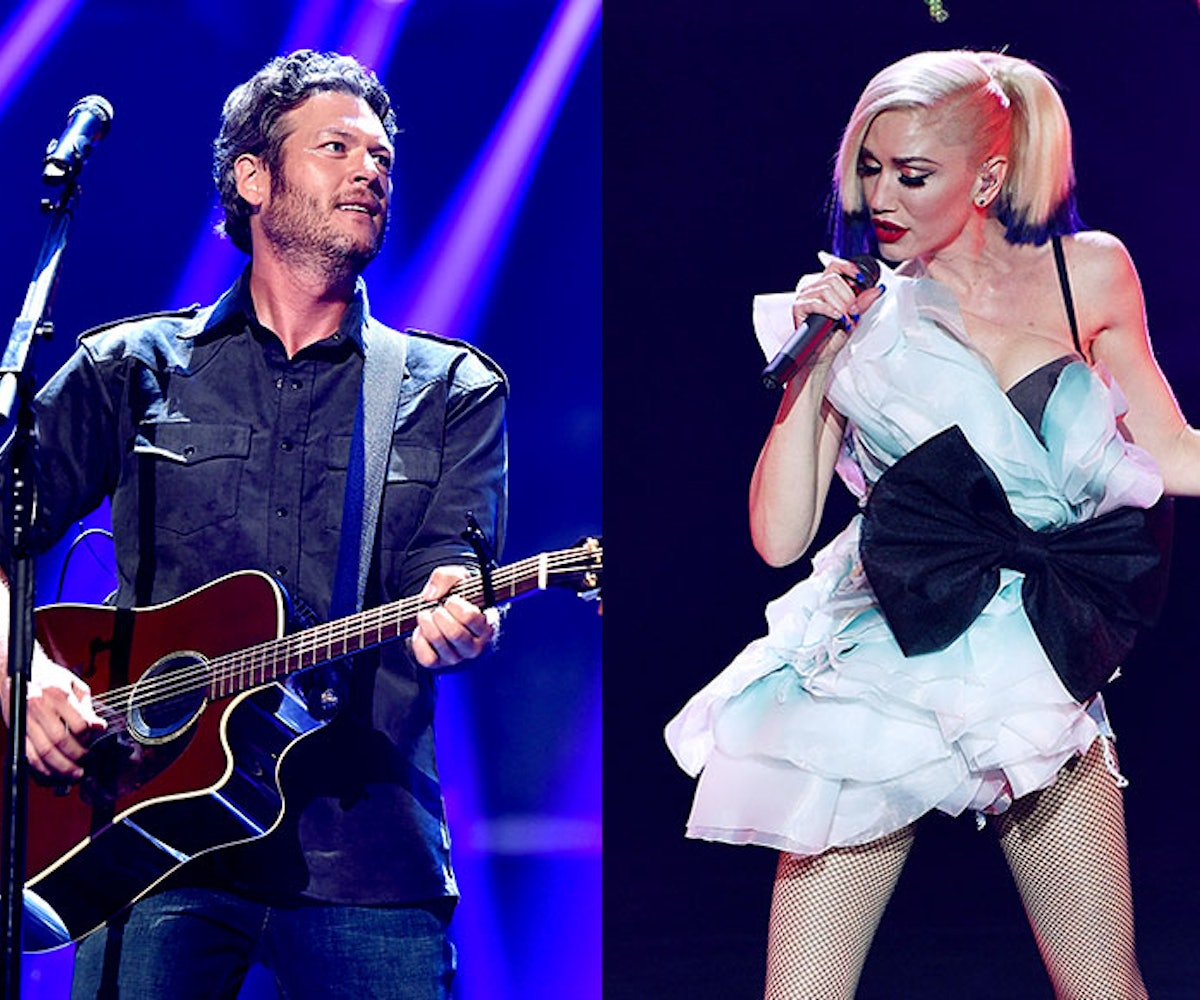 So, there is something just a *little* too convenient about Blake Shelton and Gwen Stefani's recent coupling.

As you meander through this piece, though, here is a disclaimer: This isn't based in anything other than circumstance and a healthy interest in conspiracy theories—and "coincidence" as a planned event. To be clear, I have no interest in dismantling anyone's happiness, but having spent years writing and reporting on pop culture, I am the first to admit that there is a giant machine at work and we are all just delighted little peons staring at its pretty cogs.

It isn't that I'm having an issue with Gwen Stefani suddenly taking an interest in the all-American Shelton after decades of dating super-edgy rockers. And I am certainly not continuing to cry into my whiskey over the dismantling of one of music's most endearing, enduring couples. Blake and Gwen just add up too neatly, it aligns too well, and it smacks of a great, big publicity tour, and guess what...we are all along for the damned ride.

Let's put on our respective tin-foil caps, y'all.

While country music isn't my forté, I was aware enough to know that Blake Shelton and Miranda Lambert were the first couple of the CMAs, and that the duo always had a united front. Blake filed for divorced on

, which was almost exactly a month before Gwen and Gavin announced theirs (

coaches suddenly had their personal lives thrust into the spotlight.

In the midst of this, Stefani is suddenly releasing not only her own music, but a new No Doubt album, as well (yay!)—along with collaborating with both

, because those Coaches like to keep it in the family. As with any release, she has suddenly found herself at the center of a press maelstrom, needing to develop hype and buzz where she can. And, of course, there is nothing more buzzy

than doing a, um, country duet with your surprising, soft-and-sweet new beau

is currently heading into its season finale, and there is nothing more enticing than watching a new celeb couple make eyes at each other on live television. Ratings, dare I predict, are going to be good.

But most importantly, both Shelton and Stefani have images to maintain. A bombshell breakup comes with heaps of weird publicity:

covers, TMZ speculations about causes for the split, rumors swirling, Facebook-trending topics, nannies speaking out, blind items coming to fruition, the whole shebang. There is nothing that generates goodwill like a delightful, new relationship between two people who suddenly found themselves in the midst of heartache. For Gwen, she gets the halo effect of being with one America's most likable fellows; for Blake, he is edged up by pairing off with the queen of pop punk, one of the most stylish women in the world. It's a win-win.

Look, this may be a little "inside baseball," but when rumors swirl about a new romance and a rep immediately goes to confirm it, it just seems a bit

clean. (The general PR M.O. is to put discussing the coupling off until the last minute, à la Jennifer Lawrence and Chris Martin, or, say, Drake and

) And, Hollywood has a storied history of putting together couples in order to sell movie seats.

, who was responsible for selling the off-screen coupling of on-screen stars to the world.

have all allegedly had studio-sanctioned relationships—and anyone who has been near HBO has heard the stories of Tom Cruise's auditions for a partner. (While this may be a bit extreme,

even the director of Twilight

, who both dodged questions about whether or not they were dating for the entire run of the series.)

And while none of these relationships were outright "fake," there are incentives to sudden coupling,

as DListed points out

, "Right before the CMAs, Blake and Gwen’s rep let everyone know that, yup,

they’re humping each other full-time

. That night, a pap somehow got a picture of them holding hands at an after-party. The plan was for them to quickly go to that after-party to show everyone that they’re a thing now. They really showed us!" They did, indeed. The timing, even the most romantic of us most admit, is pretty darn convenient, and the press Stefani and Shelton have each generated has certainly been a career high. Rebranding complete.

Or maybe these are just the ramblings of a jaded entertainment writer who is struggling through the quagmire for something that resembles genuine affection in the world of celluloid illusions. Maybe true, real affection in the form of mega-stars is entirely feasible and we are just too poisoned by the anemic light of our computer screens to believe in such possibilities. Maybe Gwen Stefani and Blake Shelton have been quietly falling in love the entire time they have been on

and, sadly, their relationships ended as a result of their truest, most beautiful coupling.

NEXT UP
Culture
6 Shows To Binge Once You've Finished 'The White Lotus'
Culture
Phoebe Dynevor Will Not Return for Bridgerton Season 3
Culture
11 Must-Read February 2023 Books
Fashion
Collina Strada & Vans Team Up For A Chiller-Friendly Collection
Style + Culture, delivered straight to your inbox.