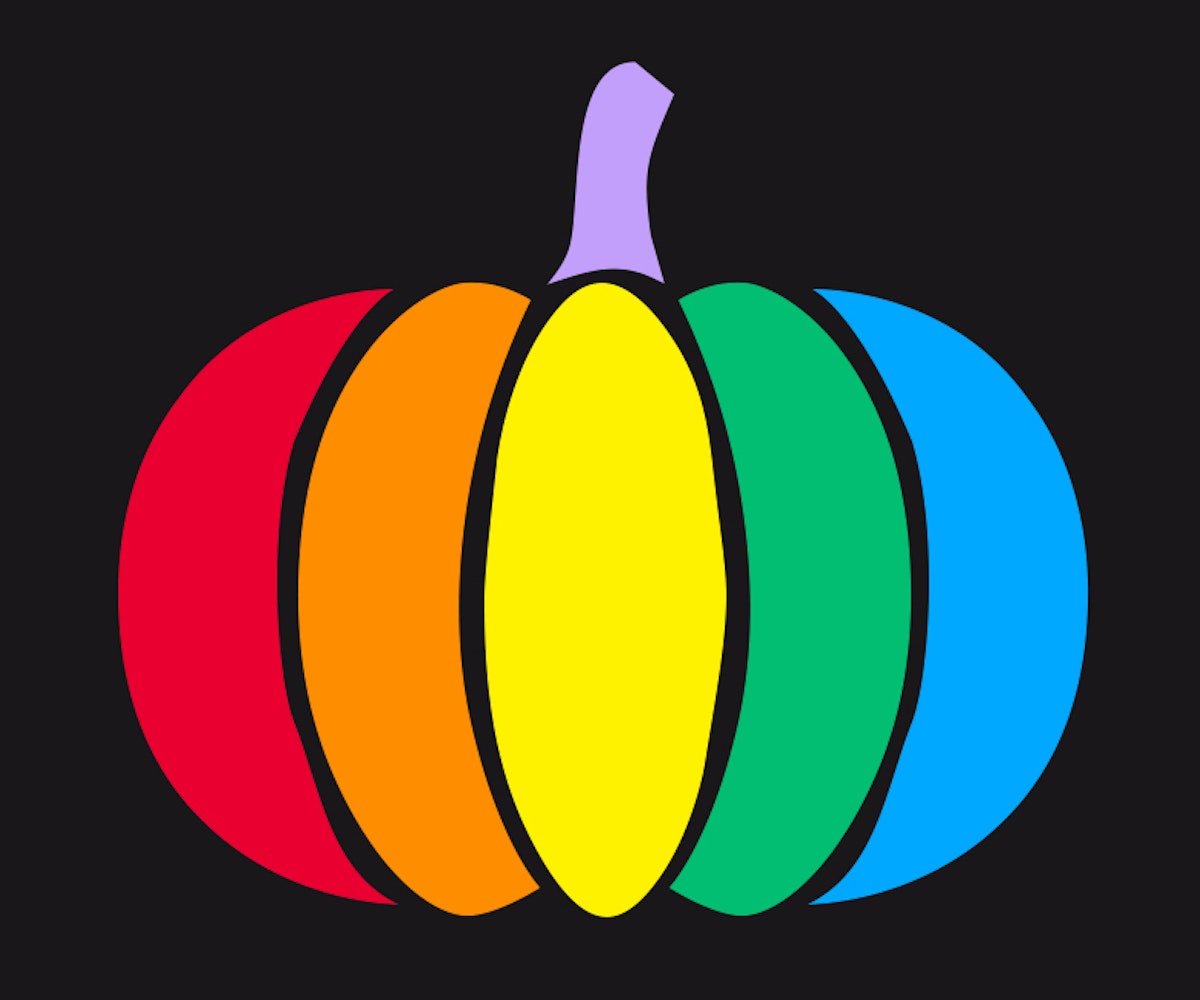 Gender norms are routinely policed, both institutionally (thanks in part to the backward policies being implemented by the Trump administration) and in everyday life, by complete strangers. For many, bathrooms have become a battleground, and online shopping a preferred alternative to being judged for the section in which people shop for clothes. That's why Halloween has become, for some, the only time they can feel comfortable expressing themselves without fear of being told who they should be and what they should look like.

More than that, though, Halloween—a time when everyone is free to transform into anything they can imagine—is an inherently liberating time, one that can serve to help people better understand themselves and their identity.

In celebration of this special time of year, I asked six trans and gender-nonconforming people how they felt about Halloween, and whether the holiday had any impact on their lives or view of their own gender identities. Read their stories, below.

Most days of the year, when I wear what I consider a super-normal outfit—a skirt, heeled boots, some lipstick—people often look at me like, Who's that weirdo? But on and around Halloween, everything inverts. My identity is perceived not as an aberration, but as a costume, and all of the sudden it's socially acceptable. It's like we have one holiday a year where we acknowledge that gender is, in fact, playful. I love that Halloween gives people—especially male-bodied people—cultural permission to experiment with gender. But it's bittersweet, because why should we only have this ability once a year? Why can't we affirm and rejoice in creative expression every day? Why can't we, day by day, acknowledge and celebrate that gender expression is merely a costume? I wish that the Halloween spirit could continue all year, but alas.

When I was a child, I adored Michelle Pfeiffer’s Catwoman [so much] that I even taught myself how to do a cartwheel. I desperately wanted the catsuit, [but] since our mom made our costumes, she wouldn’t do it. Instead, she made me the Hunchback of Notre Dame. One year, I got to be Peter Pan, but my thrill was mainly in watching the Mary Martin [version of the movie] where she flies and you can kind of see the wires. As I got older, I found a Dorothy [from The Wizard of Oz] dress that was for a little girl, and so I wore that every Halloween for years, with booty shorts under. I eventually found a catsuit one year, and wore cowboy boots with it and called myself Puss in Boots. This year, I'm going as Gandalf.

Growing up, I always looked at Halloween as the one day where I could fully be the androgynous misfit that I am, without getting any looks or comments from the other kids. I could dress up as anything, be anything—including the opposite sex—and it was acceptable. For once, I wasn't rejected. I wasn't judged. I could live my life without fear for that one day. I could blend in for one day.Throughout my teenage years, Halloween was the one day where I could feel how different my life would be if I blended in with the rest of the kids. It was the day that I got a mental break from the fear of being bullied and judged.

When I was 12 years old, I dressed up as Edward Scissorhands. I made the hands myself from cardboard and tin foil. As I transformed into Edward when I put that costume on, I felt a sense of relief. I got to take a break from being that sad little middle school kid who was bullied for being a "tomboy" and loving baseball and rock 'n' roll music, and just be Edward for a day. I got to blend in with all the other kids in their costumes.

Now, at 24 years old, I don't want to blend in, and luckily I live in a place where it's safe enough to not blend in. I get to dress as myself. I get to be myself. I'm proud to be exactly who I am.

I find all costume parties quite hard work. Right at the start of my transition, I went to the Rocky Horror Show as Colombia. So early in transition, a lot of the people I went with assumed I was in drag and misgendered me the whole night. This happened again—even more aggressively—a year later when I hosted a club night dressed as Ginger Spice in the "Say You'll Be There" video. A [man] loudly asked if he could "touch my vagina, or dick, or whatever." Not ideal.

I accept doing drag as a trans woman is a tricky one to navigate. I run a club night in the U.K. called Club Silencio. I often perform as Melania Trump, the mom from The Babadook, and various other parodies of femininity in the way that a drag queen would, but then also expect the audience to recognize me as a woman. I appreciate that's difficult. I suppose the difference is, Silencio is my domain. There, I'm in charge.

Halloween is more complicated for me. When everyone's in costume, it can be hard to clock who's in costume and who is expressing their gender authentically. For this reason, at this time of year, I usually opt out.

Halloween is one of the most significant holidays for trans and gender-nonconforming people. For many of us, it's the first time we can (relatively) freely experiment with not only our fashion but also our sense of self. Halloween reveals how gender policing is socially constructed and only applied based on a strange, antiquated system of enforcement.

Being a trans woman who doesn't adhere to gender norms, Halloween was one of the first times I was able to dress in clothing of different genders. One year shortly after transitioning in high school, I dressed up as a rabbit in short shorts, and later did my best Justin Bieber impression. When I was five, I even dressed up as the Statue of Liberty not realizing that might have broken gender boundaries. Now, I try to alternate genders each year, and participate and incorporate gender as a central concept to my costumes.

The strongest memory I have of Halloween growing up is the scent of old lipstick. My mom had tin chocolate boxes full of makeup that I would wait year-round to open up. As a kid, I’d [mentally] stockpile the face of every princess in every storybook, so that when Halloween came, I could become one myself. But we couldn’t afford the princess dresses, so my mom made all our costumes by hand. I distinctly remember stepping out into the cold as Juan Valdez in my father’s sombrero vueltiao and a more than slightly askew mustache. I was blissful. My mustache smelled like old lipstick.

My year-long harvest of the ultra-feminine may have been prep for a costume, but it [wound up being] one I’d wear every day but Halloween. I learned to remove the eyebrows I’d inherited, and paint my face into demeanors I knew were expected of me. Every day I’d apply a fresh shade of lipstick. New lipstick smells different.

I’m now a drag-lesque artist, so I spend a lot of my days covered in costumes. Throughout my performances, I peel back layer after layer, opening space for the parts of me I no longer feel ashamed to value most.