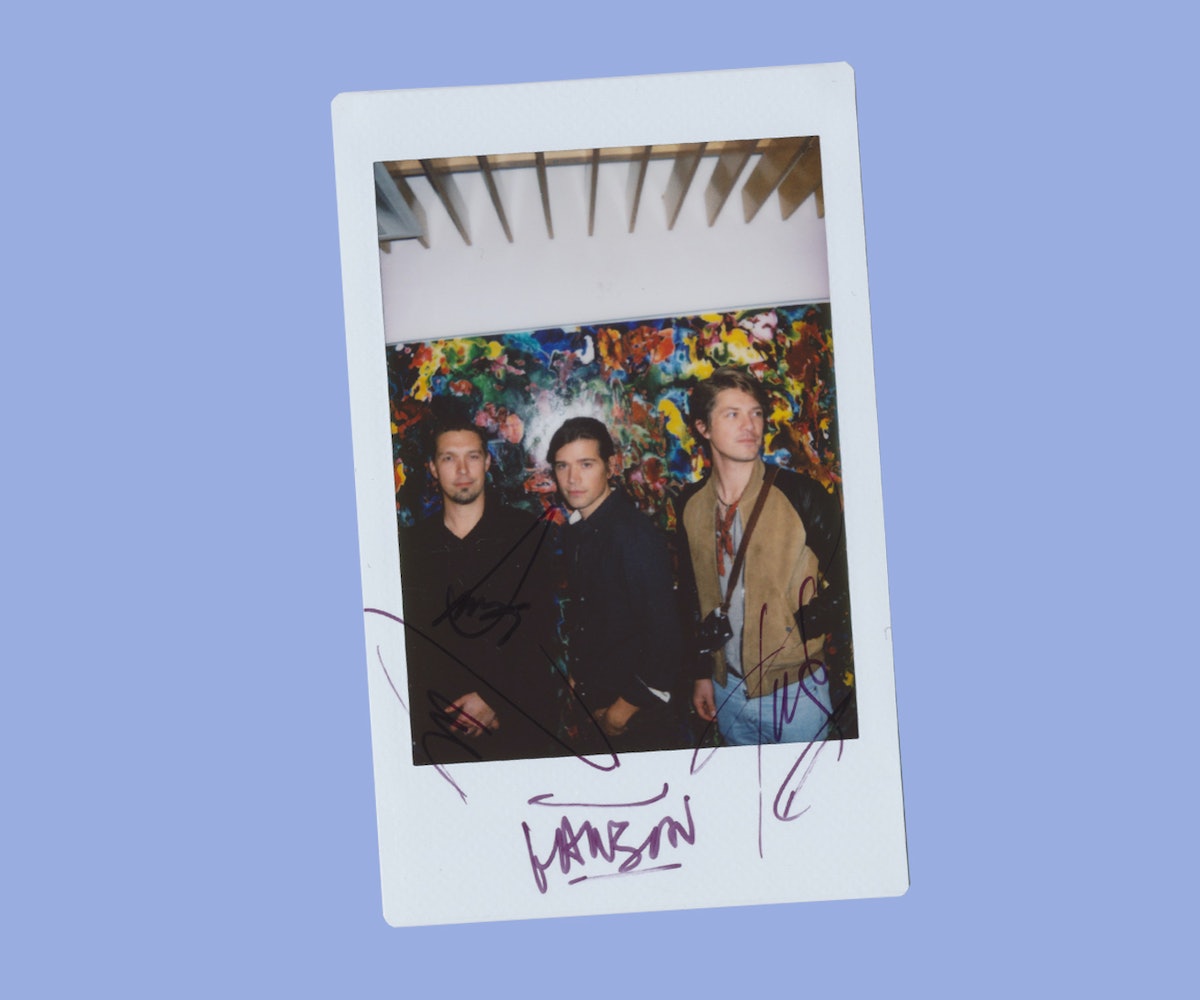 Hanson has always been about audiences hearing their music for the music, not the gimmicks that often come with being pop stars. "We're very serious," Taylor says, "which is funny because people think Hanson as being very pop, very young, and not-so-serious."

I met with Hanson bright and early at the NYLON offices during a routine fire drill. (No, really.) They took it all in stride; they're vibrant, and they're eager. Hanson's debut album, Middle of Nowhere, celebrates its 20th anniversary this month. It's the album that skyrocketed the Oklahoma brothers to stardom in the late '90s, cementing "MMMBop" as pop canon. It's the album that positioned the trio as a band with soul, that wasn't some bubblegum product from a hit-making machine, a band with something to say. They wrote all their songs, played all their instruments, and were talking about very mature themes. "You have so many relationships in this life/ Only one or two will last," Taylor says reciting "MMMBop's" song's opening verse. "It's kind of a melancholy song really, if you look at the lyrics."

The brothers—Isaac, Taylor, and Zac—have been performing together for 25 years. It took them five to get a record out on a major label. Since then, they've put out six albums including a Christmas one. They're passionate and, through this anniversary year, have come to find the joy in how universal themes off Middle of Nowhere still ring true. "A song like 'Where's The Love' really resonates right now in this world," Zac says.

Now, Hanson is gearing up for their Middle of Everywhere world tour. Before that, though, there's a greatest hits album and new music coming. Hanson found their passion at a young age and managed to make it a 25-year-and-still-going-strong career. "I wouldn't take away the journey that we've had 'cause it makes the victories and it makes the next stuff more exciting," Taylor says. Talk about work ethic and longevity. Here's to another 25.

Aside from blood, what is the glue that keeps you guys together as a band?

Zac: We do take the blood pact once a week.

Taylor: I think if you really boil it down to why are we together when many bands don't last 25 years, I think it's because we have this freakish self-confidence thing, a superpower; we know we're doing fine and we know this is what we want to do. The other part is we’re so focused on what we want to do next that it puts the issues that you're dealing with in the present in context

I: I know that any of us could be in a situation where we could just walk off and throw the towel in. But the glue is believing what we do matters.

Z: We've been talking a lot about our band’s DNA, and when we started, we were—and still are—influenced by late '50s and '60s music, which put us into a category where we were not quite in sync with our peers. We had each other.

T: He made him leave until he knew who the Jackson 5 were.

Z: It wasn't my brightest, most loving moment.

Do you ever get tired of playing the hits?

T: If any one of us wakes up and starts to complain about this, they'll get a smack in the face because there are worse things they could be doing. I mean, you're standing on a stage singing music that you get to claim as your own, somehow you get to say that you write songs. The inspiration feels like a gift. If you get inspired to write something and tell a story, there's a gift in that; so performing songs that are old and new has to be done so with full force. It would be disrespectful to go on stage and act all, "Oh yeah... 'MMMBop,' you guys know the song..." It would be disrespectful to the craft really and to the inspiration

T: But part of the job description that we have is to use that hour or two hours to unlock people and connect with them.

I: Songs like “Weird,” I will always love. That’s a song that has meant a lot to us along the way. Its message is something that everybody goes through, whether it's during adolescence or adulthood. We all need that reassurance of “hey, it's okay, we all feel a little bit out of sorts throughout our lives. We're all a little bit weird.” I'm pleasantly surprised by how much I feel still very close to all of the songs.

How much control did you guys have over your image back then when you were first starting out?

T: I can honestly say no album cover or photo on a product of this band has ever been released that we weren't involved in the approval process, from what we wore to the photographer to the final design.

I: There's actually a very specific thing that happened with the Middle of Nowhere cover. If you go back enough, you can actually find early "MMBop" singles that have a different cover of the Middle of Nowhere album on them. It says something like "Middle of Nowhere coming in May," and it has this little thumbnail on it. That was kind of decided on by the label; they said this is what we want to do. It wasn't actually all that bad, we just didn't particularly prefer the photo. In some ways, I think that photo is more representative of the vibe and the record and the band, but that particular photo, it was just not our favorite. So we basically, in the eleventh hour were like, "Listen we are not okay with the cover of the album."

T: The orange in the picture was because we didn't want to use the color photo that they chose. We wanted a black-and-white one. So we compromised and did a colorization of it, which has a retro quality to it, a reference to the covers from the '60s and '70s where they had a lot of black-and-whites and they would try to give it some color.

What is the most bizarre rumor that has come out about you guys?

Z: It's hard to top me being dead. It was when we were making our Christmas record. We were out overseas for a month or so, and it was being reported on the radio that I was dead.

T: It somehow got tied in with the tragedy of Princess Diana—that happened right when we got to the U.K. Somehow reports of Zac Hanson also being in a car accident started coming in. They actually announced it in some schools.

T: There's going to be new music. We're really optimistic about the future of putting out music and connecting with people. It may not come in the form of a 12-song album, but this whole arc of going all over the world is to say thank you and celebrate where we've been and create a good platform for the next round of music. There's a lot it.

T: It's called "I Was Born," and it's just absolutely optimistic. It's about this idea of an almost childlike perspective, saying, "I was born to be something," and the joy of discovering it.

I: I feel like it's a little bit between "This Time Around" and "MMMBop."

T: We didn't write it initially as one of our songs. We wrote it with some friends, and it hung around over the last couple years. We want the song to go out more as a campaign message to what we're about, which is asking, "What were you born to do?" We've spent 25 years living out our dream and for a lot of people, whether they've connected with us on the last album or 20 years ago, we feel like we owe it to inspire fans to aspire. So we're making a bucket list of other stuff we want to do and sharing those experiences across our platforms with the challenge to our fans to do the same. We want to challenge them to go do the thing that they were born to do and make a video of it and post it. What's stopping you, you know? Songs have this way of encapsulating a thought into this micro-space that you get to communicate something really big in three minutes. It's a great medium to tell a story, and we feel like it's a great chance for us to get that message across. As a lover of life, listen to the song and ask yourself, What were you born to do?