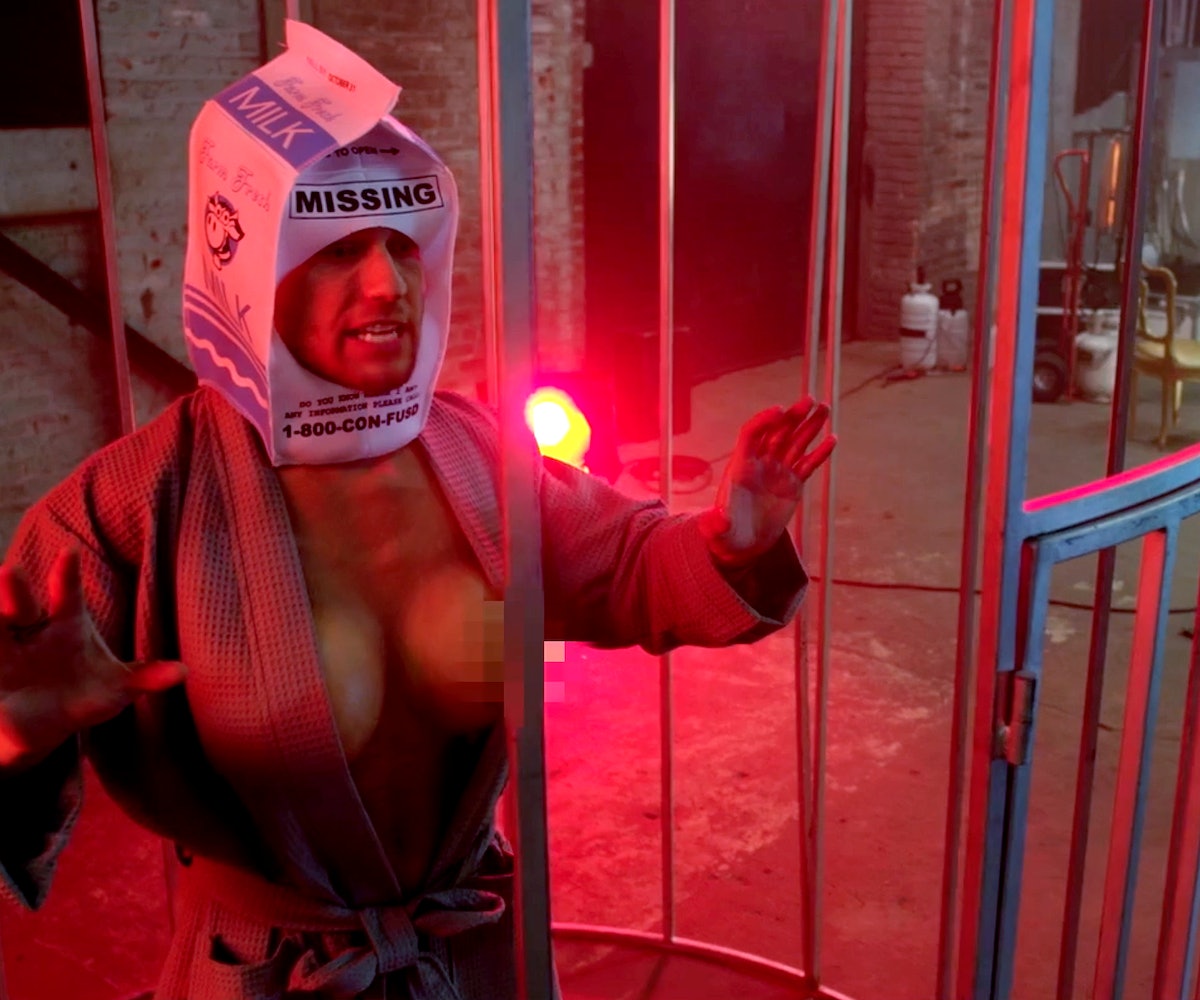 Update 05/05/17: HARD Summer founder Gary Richards has issued the following apology statement regarding the trailer: "Here at HARD Events we are here for everyone. The HARD SUMMER trailer was created as a satirical piece to raise consciousness at a time when equality issues are of utmost importance. Our goal is to promote good music and we are trying to give women more of a platform at our festival. My intentions here were only to help, not offend anyone, in supporting Agata's vision and message. I understand that she does not speak for all women and how people could be upset by the trailer. There is always a risk of misinterpretation when satire is used, but we felt it was right to let her express herself and have creative control over the piece. We want to extend a sincere apology to those who were offended. We hope the conversations started by this piece bring the change we intended and we will continue to be a champion for Women's rights within our community and world at large."

Full disclaimer: I don’t believe it was anyone’s intention to create an unmitigatedly terrible and misogynistic video for California’s annual HARD Summer festival. But it happened. And it turned my soul into a raisin.

The HARD Summer festival's teaser videos, anticipated each year, are heavily rooted in EDM industry satire and feature the festival’s headliners in outrageously scripted mini movies. They often have me doubled over in laughter. In 2015’s video, Chromeo and Mija kick Dillon Francis out of a band after he tries to insist playing spoons is the next big sound. (The back-and-forth rapport is smart and quick. “There’s someone over here hogging the tuba,” says Francis, to which Mija throws back, with expert sarcasm and wide eyes, “Wow, Dillon, you suck at the tuba.”) The video from 2014 skewered mask-wearing DJs with the likes of Kill The Noise, A-Trak, and, again, Francis (who is, by all rights, a comedic tour de force) rolling around L.A. in giant food-shaped helmets. Diplo leans into the camera, his head swallowed in a foam strawberry and brags, “Strawberry gang, baby!” They’re hilarious, and recognize that making fun of what industry insiders (and outsiders) already use as punch lines is not only smart, niche satire, it’s incredibly shareable as well.

About a month ago, I obtained a copy of the treatment for 2017’s HARD Summer trailer, written by its director, Agata Alexander. The visionary behind HARD’s viral videos for years, Alexander wanted this year’s preview to use humor to shine a harsh light on a very real problem that has (arguably) always existed within American dance music: sexism.

“The goal is to support equality and welcome everyone,” it reads. “Challenge the norm and show the world right from wrong. Let’s have fun.” Below it, in large type, “THE FUTURE IS FEMALE” is emblazoned. Fuck yeah, I thought. I had hope.

Beyond the initial pitch, I was heartened by who was involved. Gary Richards, the founder of HARD Festival, has openly been an ally and advocate for representing diversity in dance music. The Holy Ship pre-party he planned for 2016 was all women, but not billed or tokenized as such. This year’s HARD Summer lineup has a staggering amount of talented women gracing the bill, a very obvious statement to other promoters who excuse their monochromatic and mono-gender lineups with “there’s just not enough women artists out there.” The video itself features several of the festival’s brilliant women artists: Anna Lunoe, Kittens, Gina Turner, Cray, and others. The male artists involved are personal friends, who have always shown kindness and compassion toward the topic of equality, like Party Favor and Claude VonStroke. I don’t think any of them represent what is in this trailer. I don’t know how it all went Pete Tong.

The video opens with an over-the-top creepy manager, sitting at his desk with a comb over, ill-fitting suit, and, somehow most disturbingly, an open jar of mayo with a spoon in it. He's been told by Richards that the festival needs to feature more women, and it's his job to make it happen. Sitting in front of four male artists (Party Favor, What So Not, Claude VonStroke, and Kayzo), creepy manager's solution is to "make the biggest girl group of all time" by... putting fake breasts on these men?

It goes downhill from there. There's cage dancing, a male pants-less photographer trying to make the artists feel uncomfortable (a joke that loses its meaning and aha moment because, you know, everyone on screen is a straight guy), and milk pouring everywhere. Strangely, everyone almost always has their shirts open, fake breasts on display, even when it's not part of the script to point out double standards. The meaning is lost quickly. On top of all this what-the-fuckery, it also doses in LGBT erasure by subscribing to a hetero and cisnormative ideal of breasts = women, limiting the female experience to a body part. At the end, several women artists eventually walk in with Richards, but only two of them speak, and it's to point out what we're all thinking: "I don't get it."

The players in this unfortunate video aren't here to empathize or walk in a woman's shoes. Putting comedically large, or sagging, or pushed-up prosthetic breasts on men who are acting out a script, with other men, in a safe space, is not satirical. It's a mockery that whittles us down to our sexual parts. I've had to DJ in a cage at a private event, and it made me feel small. I've been grabbed while in a DJ booth, and no one defended me. I've had creepy agents tell me I was "overreacting" when their clients touched me inappropriately, and I questioned my own authority. Watching these same situations played out by men, parading as versions of cis women that are supposed to pass as cis women simply because they have breasts, just—for lack of any witty phrase or retort—makes me sad.

In an interview with Nest HQ, Alexander defends her final product, saying, "I wanted men to stand up and make the point for us. Us women shout in the dark a lot of times. We need men to stand up for us as loudly as possible. And I can't imagine anything louder than a man putting on breasts and owning it so hard like these dudes did." I agree we need allies, but there is virtually no allyship in this video. Whether Alexander's view is due to willful obtuseness, failure of lived experience, or being too committed to tits on bros as a punch line, it's impossible to say. Her history as a brilliantly satirical filmmaker is lost here, in a sea of boob jokes that lack any nuance beyond the visual pun.

Earlier in the day, a friend and I threw back ideas on what could have been better. What if the roles were switched and the women were the creepy managers and photographers? What if, when the photo shoot got too grossly sexual, the women arrived to show them up and take killer, yet hilariously blue steel-like shots, no skin required? What if it were anything else?

Perhaps most baffling in all this is the fact that women barely appear in the video at all. In the beginning, Richards says, "We only had four girls at HARD Summer last year, and we know we can do better than that." Though the festival lineup has dozens of female-identifying artists, this video only shows five, and, collectively, they appear on screen for 38 seconds. That's 8 percent of the total time. They don't even all speak, and it takes more than four minutes for the first woman (Lunoe) to appear. There's more time devoted to boob and wet T-shirt jokes than the actual women this video is supposed to be for. I may be missing something, but I find it hard to understand how excluding women from the conversation, especially when the conversation revolves around, you know, them, creates any sense of crossing a bridge.

I applaud everyone involved for recognizing that there is a problem to be solved, I really do. Their hearts are in the right place. But I wish I walked away from watching the trailer feeling empowered. Unfortunately, the only message to be gleaned from HARD’s video on women in dance music is the one we’ve been repeating for years: Do better.