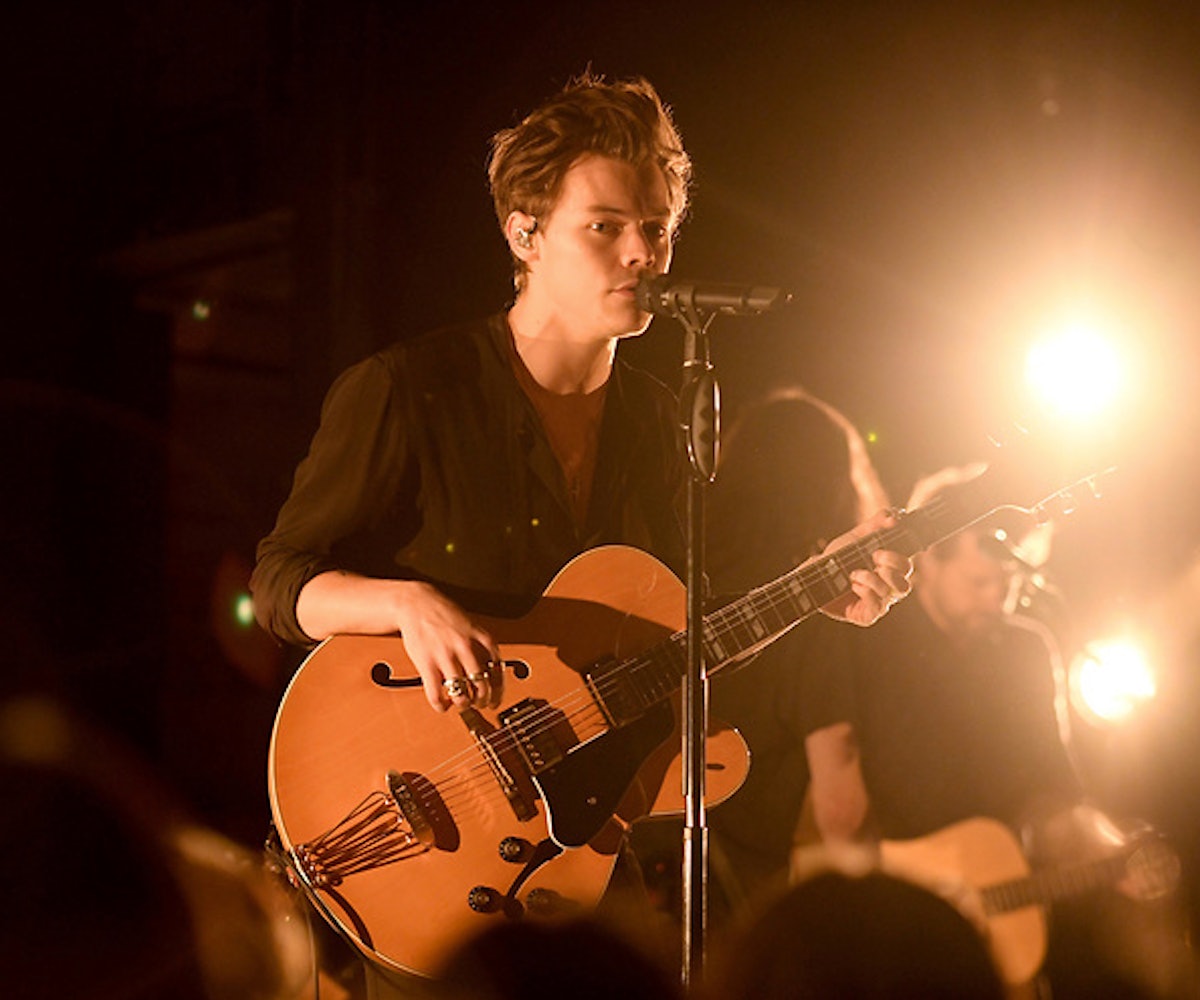 "But there's not going to be any proof that we were here!"

This was the last-ditch plea one young woman made to the security team at Rough Trade, a record store and music venue in Brooklyn, New York, as she emptied out her pockets and checked her bag prior to being allowed inside for the secret Harry Styles show being staged by iHeartRadio.

But the security team was having none of it; we all had to turn off our phones and either check them with our bags or put them in a locked case that guaranteed we couldn't use them to take photos or video of Styles, who, I've determined since seeing him up close and personal, might be the most perfect iteration of a male pop star ever, flawless from the tips of his perfectly tousled hair down to the toes of his rainbow Gucci loafers.

This collective lack of working phones led to a strange environment as we (there was a handful of press present, and maybe about 50 or so very, very grateful Z100 contest winners in attendance; these numbers could be wrong though because I'm terrible at... counting) all stood, clustered closely near the stage where Styles would soon be performing. Without phones, there was nothing really to do but talk to one another.

Unsurprisingly, there were a lot of girls there who had cut school. Later, during a pause between songs, one shout of "I skipped a chem test for you, Harry!" led to a faux stern (even his dimples were tucked away!) admonishment from Styles, "Go back to school!" He's really quite good at stage banter. (There is possibly nothing he's not, at least, quite good at.)

I was standing next to another writer, Noelle Devoe from Seventeen. We talked about the usual things, like the inherent irresponsibility of the show 13 Reasons Why and what our own relationship to One Direction was. I confessed that I didn't know that much about Styles and that I'd never been really into the band itself, though I still had a strange affection for One D, thanks to a ukulele cover I'd once received of their song "Little Things," as well as an epic email from a close friend, which was basically a long personalized annotation of "History."

Noelle said that she was a fan, but not, like, a super fan. I asked, "So on a scale of, like, one to 10, you're a... seven?" And she nodded in agreement. Then, as we talked more, it turned out that Noelle had actually, basically gotten her job post-college based on her own personal One Direction blog, and knew pretty much everything about the group (even though Harry wasn't her fave; that would be Niall), and I had to ask, "So you're really only a seven?" And she said, "Oh, yeah. There are now way more intense fans than me."

Which soon became readily apparent. Because, all around me, women were clutching at their friends and at themselves, with an excitement so pure and fierce that I half expected them to levitate from joy the moment Styles took the stage. They instead, let out a collective scream that will echo in my head till, probably, my dying days.

But you know what? I, like, get it. Because from the moment Styles came out, dressed pretty much in head-to-toe black, save for the ruffled cream cuffs at the ankles of his slim pants and the pops of rainbows and gold on his loafers, to talk with Z100's Maxwell about his new, self-titled album, it was hard not to want to scream... something, anything, just to get noticed, just so that Styles would look in your direction and flash one of those wider than wide smiles; does anyone else in the world have a mouth that, even when it's closed, looks so open? (No.)

I'm not really a screamer, though, so I didn't succumb to the momentary urge. But almost everyone else did. Some screams were just that—wails of longing. But there were also a few coherent things being shouted: "I love you, Harry!" "I'd do anything for you, Harry!" "This is my birthday wish come true, Harry!"

Some were less coherent. At a certain point, a lot of attendees just started shouting out their astrological signs: "Scorpio!" "Pisces!" "Sagittarius!" And Styles turned to the crowd and asked, "Why are you all shouting out your sun signs?"

And then there was the one woman, who didn't shout, but just spoke in a voice that wasn't a whisper but would never have been audible to Styles, "Show us your dick." It was the only, like, "adult" moment of the show, and I was equal parts grateful for and sad about it.

But so: The music. There was the cynical part of me that thought, Is anyone even here for the music? Do they even care? I mean, was it about that at all, or just getting to see the very, very good-looking Styles in person? Which, you know, would totally have been reason enough to go, in my humble opinion. As it turns out, though, the music was really good, and I am maybe now a Harry Styles fan? No, really.

Styles sang four songs from his new album, "Signs of the Times," "Two Ghosts," "Carolina," and "Ever Since New York," which he actually played twice, to open and close the show, and which, he revealed, had been written about an experience in a hotel that was just "a block" away from Rough Trade, so it must have been the McCarrren Hotel, which, you know, good to know where you like to stay when you're in Brooklyn, Harry.

And maybe all you rabid One Direction and Harry Styles fans already knew this, but I didn't because I'm dumb, I guess, but Styles is... really good. His stage presence is insane (and insanely charming), songs are catchy AF (even if you're hearing them for the first time, you can always start singing along with the chorus by the end of the first go-round), and backup band is excellent. Plus, again, his stage banter is on point; prior to playing "Two Ghosts," he revealed that it was the only song on the album that he'd written a long time ago, like two-and-a-half years ago, like after his breakup with Taylor Swift, a fact which I only know because the crowd within which I stood all started hissing to each other about it at the exact same time.

All good things must come to an end, though, and such was the case with this top-secret Styles appearance. But even after playing the final song and bidding farewell to Maxwell, Styles didn't seem like he wanted to get off the stage. I'd like to think he was sincerely enjoying this mini-show, the first he'd be playing before embarking on an upcoming world tour. And so he smiled at the crowd and said, "I dunno, but I really want to do a stage dive. Should I do a stage dive?" His smile was enormous, and the crowd's response was deafening and they all raised their hands as one, preparing themselves to hold their boy band messiah, who had taken off his guitar in preparation for his leap of faith.

Reader, I'd like to say it ended well, but it didn't. Styles' faith was... misplaced.

As it turns out, the young folks these days don't really know how to participate in a stage dive and maybe also, as teenage girls, have limited upper-body strength, and so when Styles jumped into the crowd, rather than being uplifted, he immediately sank to the floor. Instantly the clutch of young women descended upon him. I was worried he might be torn apart, or that, at the very least, one or both of his loafers would be absconded with. It was impossible to see how Styles was actually faring because everyone was on top of him. At one point, his head popped up (his hair was considerably more tousled and so maybe he was even cuter, despite being in the middle of a semi-rabid swarm?), but he was almost immediately pulled back down.

Soon enough, though, security pulled him out of the clamor and back up onto the stage, where Styles stood, clearly taking it all in stride, and grinned his biggest grin yet. He then apologized to the suits in the balcony, who had probably spent the last 30 seconds frantic that something was going to happen to Styles' face, thanked the audience, and walked off stage, gold bees on the back of his loafers sparking in his wake. The room got perceptibly dimmer. It was time to go home.

Harry Styles will be available on May 12.

And the iHeartMedia Album Release Party will be available via radio broadcast on May 12 at 7pm on iHeartMedia’s CHR and Hot AC and via digital broadcast/on demand May 12 at 7pm through May 23 at 11:59pm online via iHeartMedia.com/HarryStyles