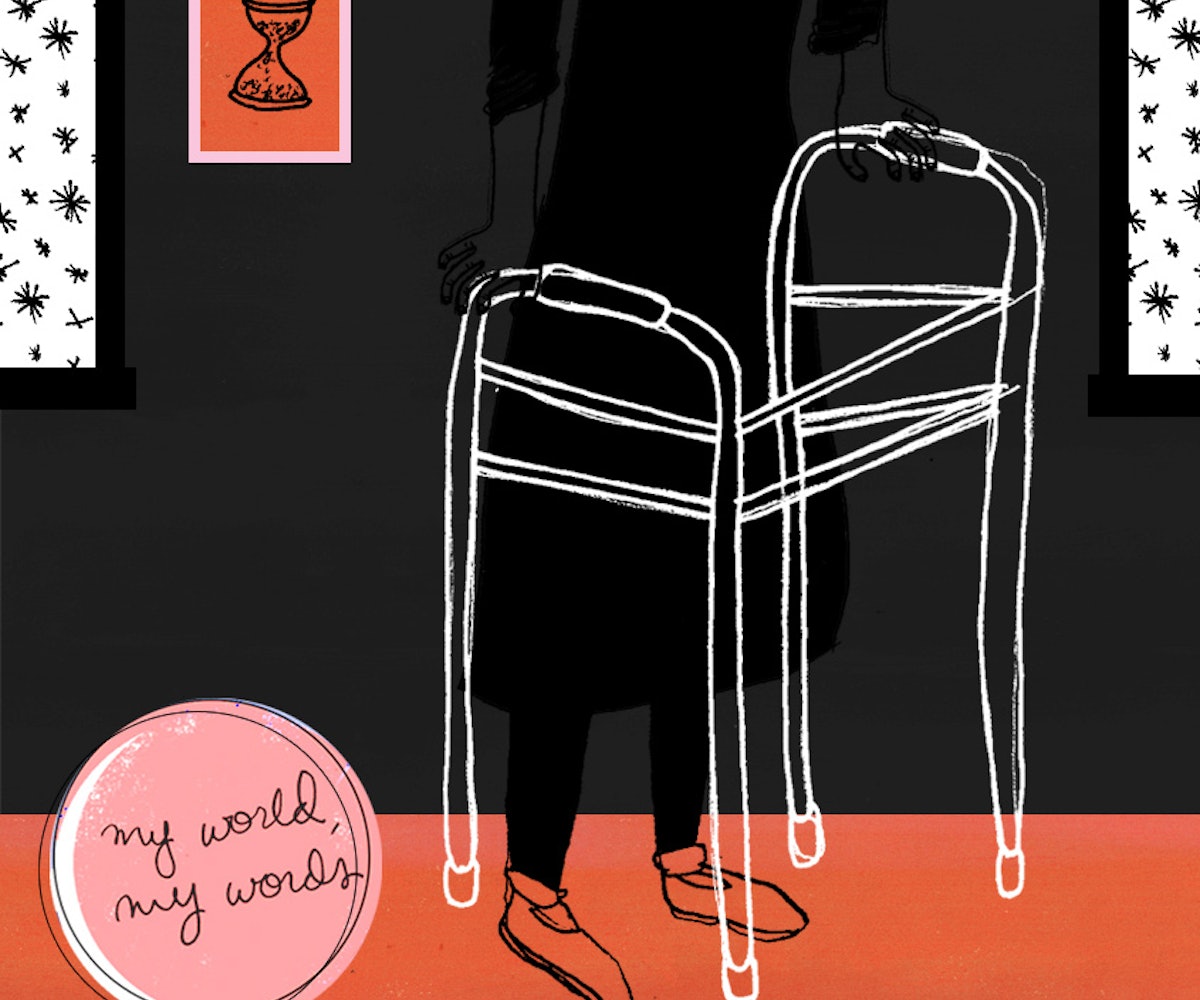 My World, My Words is a series of first-person essays featuring totally unique, inspiring experiences unlike anything you've heard before. The most interesting stories are also often the most overlooked, so we're on a mission to find them and share them with you. Written by people from all walks of life, these essays will move you in ways you might not expect—and that's the point.

My name is Maria Dyer, and I am a storyteller and a filmmaker. I grew up living with a sick parent. My mother was diagnosed with primary progressive Multiple Sclerosis (the worst kind of MS) when I was seven years old. She went from being an amazing energetic mother to just an amazing one, who most of the time didn't have much energy, who couldn’t do the things normal parents did.

The toughest thing about living with a sick parent is all of the anxiety that comes with it. I remember the first time she fell. I was seven years old. It was spring, and I remember the flowers blooming in our front garden. We were leaving for school and our cat ran out the door. My mother followed him, and she fell in our lawn. It seemed like a normal fall at the time. But the ankle brace that she wore around her left ankle never went away. Her ankle never healed. She slowly lost her ability to walk.

In the beginning, I helped my mother walk. She balanced herself by holding onto my shoulders. Then one day, she came home with a cane. I was slightly embarrassed that she had to use it. She took me to my ballet class, and one of the girls saw it.  She said, “What a cool cane.” That made me feel a little better. It was a cool cane (made from a beautiful wood).  My mom was kind of badass with her cool cane. I got used to her using it, and she was able to get around ok with it for awhile. But slowly and surely, her whole left side became numb and unresponsive. She would be walking from the car to a doctor or to a class (she was attending night school) and she would fall and not be able to get up. After that, she got a walker, and she kept on going.

She came to my basketball games and stood with her walker to the side of the bleachers and yelled for me as loud as she could. She encouraged me to be the best person that I could be, to work and study hard, and to follow my dreams.

One night, before a big school dance, my mother fell and hurt herself. I was dressed up and waiting for my date to come. As she was walking down the hallway, somehow she tripped and fell. She hurt herself, hitting her head on the side of a table and falling on her hand. I ripped my dress as I was lifting her up. I remember how worried I was at the dance for her.  Would she be ok? Should I even be at the dance? I wasn't sure. I became constantly worried that she would fall and hit her head, and I wouldn't be there to help her. And I had nightmares that I was at school and couldn't leave and my mom needed my help, and I wasn't there.

Not long after, a wheelchair appeared in our house. Mom couldn’t drive anymore. But that was ok because neighbors, friends, and family helped us out. And honestly, most of the stuff that I helped out with wasn’t that tough. It wasn’t that tough to find a ride home from school, to shop for groceries, to cook meals, help out with the laundry and the bills. That’s just stuff you need to do.  But what I really wished was that she was just normal. That she could still do everything, if she wanted to. I wished she was a mom that was off at work, and I had to do these things because she was in an important meeting. I just wish she was normal and that I could invite friends over to my house and it wouldn’t be weird.

As things progressed more and more, I was unable to take care of my mother, and she ended up in the nursing home, and I went to live with relatives. I felt guilty about this for many years. It's taken me a lot of time to realize that some things were out of my control, and I did the best that I could and that is all I could do.

If you have a sick parent, you're confronted with one of the hardest things anyone ever has to confront: the reality that no one is going to live forever. And your parent, who was your sun and your moon and the earth and the sky, isn't anymore. They are a human, and the specter of their death is haunting. It's an existential terror that becomes a very visceral, a very real one.

There is nothing more difficult and more human than loving someone and knowing that you will lose them.

I wish I could offer some flowery advice about all this but I don't have much more to say other than the fact that is sucks. And the only thing that I've taken from it is that when you know that life isn't going to last forever, you open to the reality of how awesome living is, how it's crazy that we're even alive. We aren't given much time here on earth, so make it count. Be kind to yourself, to others. And know that you're not alone, we're in this together.

MariaDyer is a filmmaker and artist living in Brooklyn. She is getting ready to direct her first feature film BLESS, about a road trip two sisters embark on with their terminally ill mother to find a cure, which is inspired from her own experience.