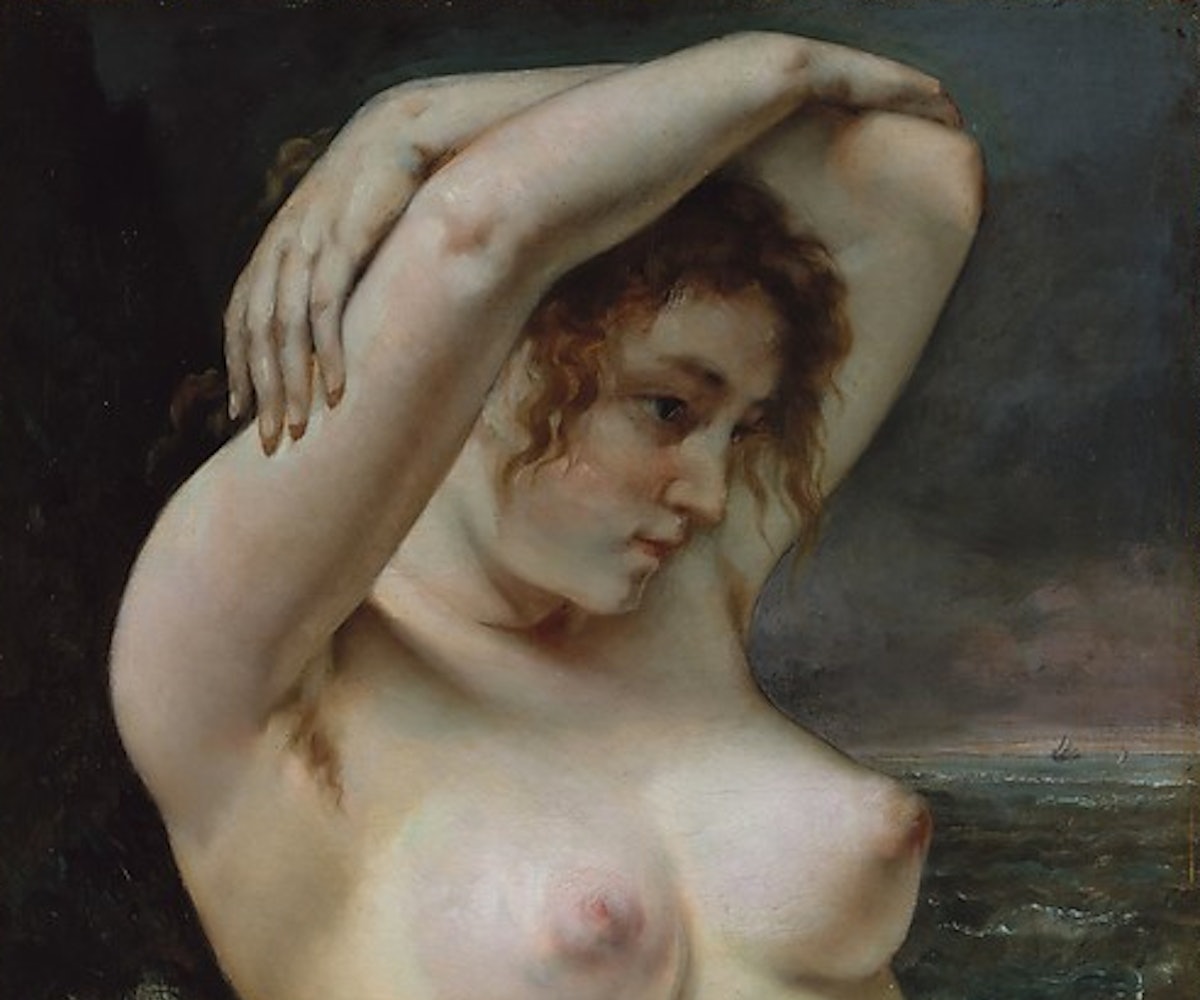 There's a singular pleasure that accompanies growing up in New York City. Namely, one of the world's greatest art collections becomes your go-to rainy day activity. This means countless Saturday mornings running around the ancient stone walls of the Temple of Dendur, with cool, gray light slanting in through towering windows, casting shadows over you as you throw penny after penny into the still reflecting pools. This means stopping short in front of the armor of Henry VIII, marveling at the fact that such a larger-than-life historical figure once fit himself into the gilded metal suit standing right in front of you. This means long minutes spent staring into the softly gazing eyes of Vermeer's young maiden, the one wearing a pearl earring, though not the one wearing a pearl earring. This means obsessing over the pale shoulders of Madame X, and thinking what it means to be a woman, grown. This means exploring the Metropolitan Museum of Art in all its glory.

Growing up surrounded by such beauty is a gift, and it's one that people from all over the world can get a tiny glimpse of each year when the museum plays host to the storied Met Gala. And should this year's festivities inspire you to pay a visit to the museum, I've compiled a list of some of my favorite pieces in the Met's internationally revered collection. While I would never dissuade anyone from seeing the iconic works of art for which the museum is best known, the following pieces are my personal favorites, kind of the hidden gems. Because while, yes, it is totally acceptable to just go to the Met and stand slack-jawed in front of the palpably silky, slippery folds of fabric in Ingres' portrait of the Princesse de Broglie, there are many other pleasures to be had in this art world treasure.

Though just a piece of what once must have been a truly arresting portrait of Egyptian royalty (it's speculated that this fragment depicts the legendary Queen Nefertiti), it's hard not to be stopped in your tracks by the finely wrought, incredibly sensuous mouth of this long-vanished queen. Though more than 3,000 years old, the sensibility of this piece doesn't feel modern, exactly, rather it feels timeless. It's evocative of the way desire and worship and love all work together in the ways in which we see our cultural icons. It serves a synecdochal purpose, standing in, as it does, for the entirety of this ancient society's brilliant dominance, it's unparalleled ability to inspire awe and devotion, even now, many millennia later.

This vividly colored—I mean, this is the kind of blue that pierces through your eyes and into your heart—miniature statue of the goddess Isis and her son, Horus, is one of the most emotionally true renderings of motherhood I've ever seen. From the gentle way she holds her son's head to the firm grasp she has on her breast, the timelessness of maternal love is both contained in and spilling out from the confines of this immaculately rendered sculpture.

Photos simply can't do this towering ceramic sculpture justice. He looms over you, gazing down with wise eyes and a knowing expression. Despite this sculpture being over a thousand years old, its presence is strong and its force feels vital. The craftwork is unbelievable, but beyond its technical wonders, there is a humanity in the folds of the face that makes it feel like, were we to reach out and touch the beautifully honed cheekbones, we'd feel warm blood coursing beneath the surface.

"The Visitation," attributed to Master Heinrich of Constance, ca. 1310-20

Sure, this is the Virgin Mary (pregnant with... a crystal? Cool!) visiting her cousin Elizabeth (also pregnant with a crystal!), and so maybe not altogether that relatable. Except, you know, it's totally relatable for any of us who have gone to hang out with a girlfriend and talk about the new things going on in our lives, like how we're pregnant via miracles and both our sons are going to grow up to be martyrs. Or, what have you.

Forget Diana Vreeland, the real originators of "think pink" were definitely medieval Catholic painters. In this gloriously gory work, full of lurid pink, red, and gold, Saint Catherine tears her own heart out of her chest to give to Jesus. That is hard-core. What's not to love?

This painting's apocalyptically hued sky offers an urgency and feverish luminosity that entrances me every time I see it. The lush pinks and golds are in stark contrast to the barren trees and ominous-looking animals of the wilderness. I'm not totally sure if the point here is that embracing God will lead you to a kingdom bathed in millennial pink, but I'm not not sure that that's the point.

It feels like, if there's any painting in the Met that will start leaking real tears in some kind of modern miracle, this is it. The emotion is palpable, and the humanity of Jesus—despite his godliness—has never been rendered more clearly. The littlest details, the raised veins and the wisps of hair around his nipple, all contribute to the horrific sadness of this image, the grief that accompanied his death, a sorrow that had nothing to do with the fact that Jesus was a deity, and everything to do with the fact that he was all too human.

"Plate with Wife Beating Husband," Made in Dinant or Malines, Netherlands, ca. 1480

The material used for this incredible plate is "brass, beaten," which always makes me laugh whenever I see it. I mean, I'm already laughing because this plate is incredible. I want it. Like, men have always been bad, you know? And this plate proves it.

If you go to the Met, you'll see tons of paintings, sculptures, and drawings of the Madonna and child. This one is my favorite, though, because baby Jesus is holding a bird the way that a real toddler would hold a bird, i.e. as if he were going to accidentally squeeze the life out of it. Also, I'm pretty into that fat cucumber just hanging out in the upper left corner.

Those grapes! They're lit from within, and it's possible to actually inhale their musty, musky odor if you stand close enough. They have a beauty that can bring me to tears.

Probably only temporarily on display (because it's the Year of the Rooster), this amazing little sculpture is a fine example of the whimsy in some Chinese ceramic work. This rooster embodies all of its zodiac traits, standing in its full cocky glory, ready to take on the coming year. (Also, his outfit looks, like, so comfortable.)

This six-foot long panel is quietly stunning. The cherry blossom branches have a breathtaking grace and delicacy, and the vivid green moss on the tree trunk is simply arresting. But the real stunner is the way the trunk fades into the gold background, the same way spring fades, the same way all new life does. The purity of this beauty is exquisite. Try to see it standing next to someone you love.

Okay, so this painting is by an unknown artist and it's of an unknown family. Why is it so great? Because it's creepy as hell. Basically, the cute little girl in the center? Is dead. And that beautiful scene out the window? Is heaven. Because that's where the little girl is going, because she's dead, and her parents are in mourning clothes. And yet they look weirdly happy? What is going on here? Who knows. I love it.

His toes. His toes! Have you ever seen more conflicted toes?! I mean, no wonder Ugolino is conflicted; legend by way of Dante has it that Ugolino was locked up with his sons and knew that his only means of survival was to eat them. The kids knew it too, so they were begging him to do so. Your toes would be clenched too!

The Met has plenty of places in which you turn a corner and find yourself confronted by something that gives you pause, and makes you consider if everything in your life has been wrong, like you never knew what the color pink meant until just this very moment. Just see if that doesn't happen to you with this Courbet masterpiece. Lose yourself in it, and maybe find a whole new self.

If you didn't know this was Joan of Arc, you might just think this was simply a portrait of a beautiful, if melancholic, French farm girl, surrounded by a whole lot of wood. The dreamy quality of her face, the way her limpid blue eyes are staring off into the heavens, lost in thought; these things don't necessarily betray the fanatic fervor which must have been present somewhere in young Joan. But that's why this painting is so incredible. There's no fire and flame to it, there is simply a young girl. But within her lies the power to bring down armies and to change the world. The rosiness of her cheeks belies the swelling heat that will rise up from within her, and that will one day consume her. But, for now, she's simply a girl in the woods, unsure of what comes next.

The gleam of light running down the lengths of these young women's bodies, the lack of specific detail as a means of conveying the hazy glories of the full blush of spring. This work is notable for the ease of its beauty. It is not hard to love it, but that doesn't make it simplistic or reductive. Rather, by eliminating the excess noise and just allowing for the true beauty of spring to shine through, Denis expands its meaning, leaving those who see it feeling enveloped by its grace.

Who knew stone could feel so soft, like the blur of a kiss that grazes your face? And who knew sculptors could have such a sense of humor about the lengths to which they objectify their subjects, pretending that love is an excuse for the total consumption of another being? Stand in front of this sculpture for a while, and ask yourself these questions and, you know, many others. Answers may or may not come, but who cares? You're in the presence of genius.

O'Keeffe's water colors don't get as much attention as they should. Their elegant simplicity is entrancing, and the purity of form feels like a drink of ice cold water on the hottest of summer days.

This vase, with its layered applications of different colors of glazed ceramic, is a technical wonder, yes, but it is also part of a grand tradition, tracing back to Courbet's "L'Origine du Monde," in which the true beginning of the world is celebrated and rightfully adored.