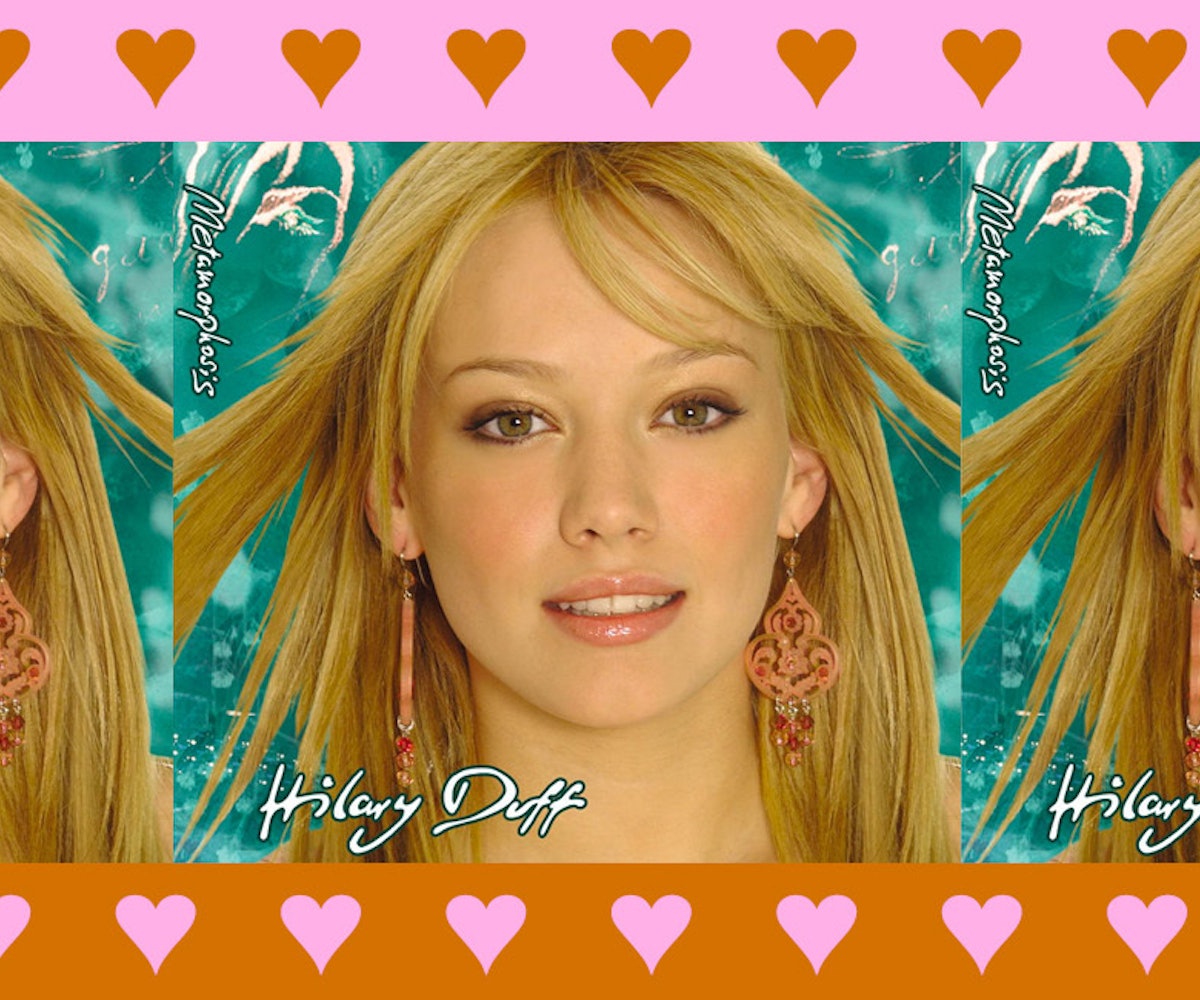 If you can’t do the math, we’ve done it for you: Hilary Duff's Metamorphosis was released 15 years ago. There’s a reason we still can’t help but turn up the volume and throw our head back, scream-singing along whenever “Come Clean” comes on shuffle. (If you say you haven’t heard it since you were young, you’re lying or have a bad taste in music. Sorry, I don’t make the rules.)

The album is inextricably linked to the Lizzie McGuire era. Metamorphosis closes with a single from the movie “Why Not?” which was also Duff's debut single as a recording artist, and a separation from that of her beloved Disney Channel persona. And Lizzie McGuire wasn't just beloved—she was lovable. She yelled about wanting a bra! I wanted a bra, too! (I was seven years old, but still!) And, just like her fictional counterpart, Duff was lovable—she even did her own smoky eye on the red carpet.

It really felt like there was a little bit of Lizzie in Hilary, and Hilary in Lizzie—and neither was even mildly threatening to me in the way that, say, Avril Lavigne was. (Remember, I was seven in 2003, and Lavigne's slightly more grown-up angst was confusing for me still.) Duff, though, with Metamorphosis, gave me the guitars and driving rhythms to which I loved to dance around my room, but with an accessibility I had yet to find anywhere else. Her voice wasn’t that of a seasoned musician but carried an innocent, nasal quality also prominent in her speaking voice. It was uniquely her.

And yet, despite being uniquely her own, Duff's voice still sounded like mine. Not actually, but in the sense that I could imagine her using that voice to complain about the same things that were bothering me, like being upset about not marrying my crush in a game of MASH, or finding out my BFF was transferring to Catholic school after the summer. Duff sounded like someone who also knew that even the trivial things that happen all the time can feel like they have the power to alter your life, forever.

Duff wasn't afraid to sing about truly trivial things—just listen to the admittedly juvenile “The Math,” which features the killer line, “If you can’t do the math, then get out of the equation/ I am calling you back/ This is star 69”). But when Duff sings out, “Don’t need a man to make things fair/ ‘Cause more than likely, he won’t be there/ Listen, girl, gotta know it’s true/ In the end, all you’ve got is you,” it doesn't matter if you're 15, like Duff was when she recorded it, or seven, like I was when I first listened to it—you feel what she's saying. Hell, I still feel it now. In the most Lizzie way, Duff was never going to give her power over to anyone else—especially some boy who could never possibly deserve it. It's no wonder then, that she is also responsible for my favorite unsentimental  breakup track, "So Yesterday," in which she declares, “You made my mind up for me when you started to ignore me/ Do you see a single tear?/ It isn’t gonna happen here.” Boy, bye.

It would be easy to say that it's just simple nostalgia that keeps songs like “Come Clean” forever on our playlists, but listening to it all again, 15 years after its release, reminds us of the, yes, metamorphosis that we've gone through since first listening to the album. Metamorphosis feels at once like a time capsule of the Disney Channel's long-ago charm, as well as a reminder that everything changes, but maybe that's okay. Stream the album, below, and raise a glass to an album that's forever young in our hearts.