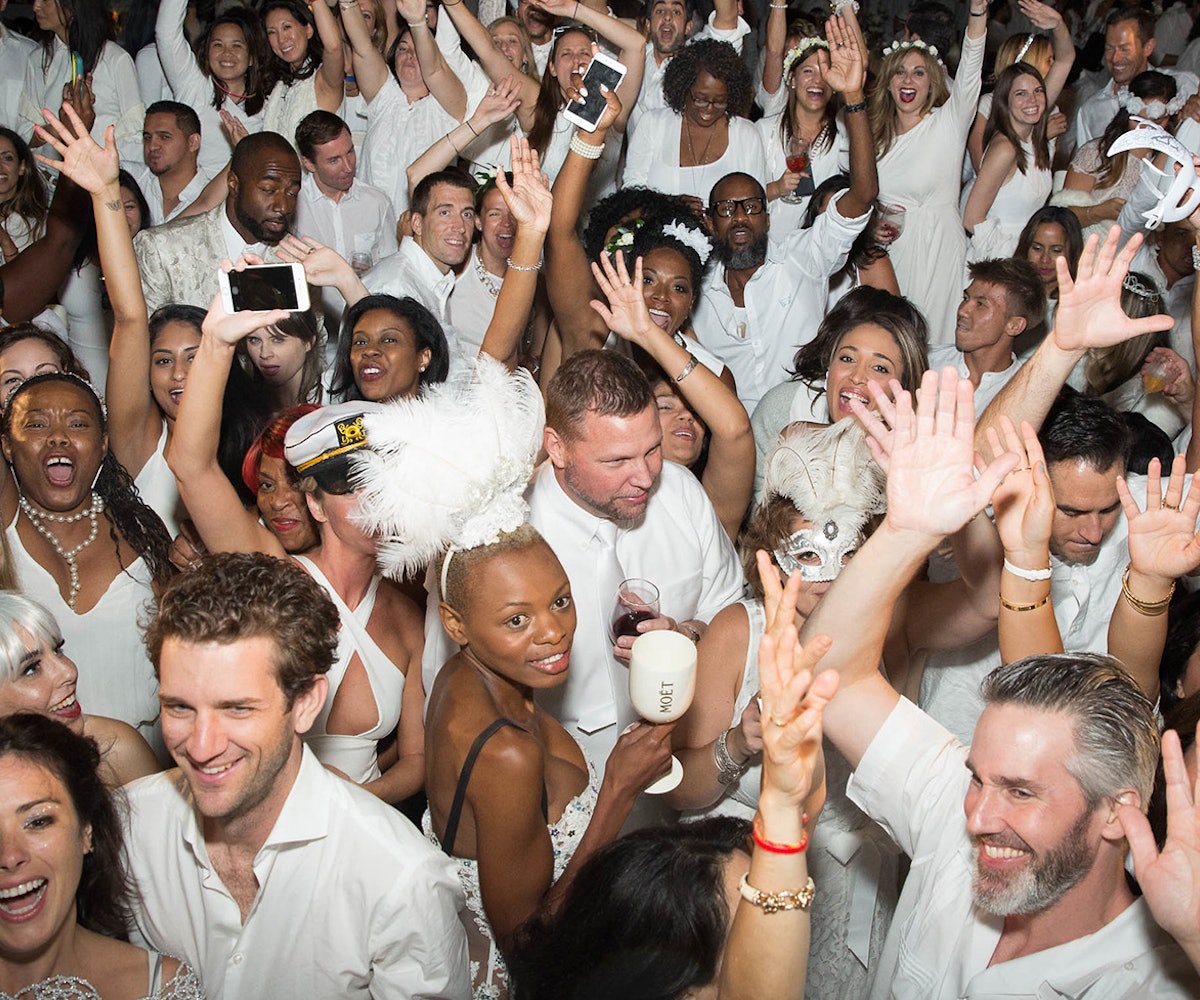 Standing on an elevated overlook in Manhattan's Robert Wagner Jr. Park in Battery Park City, equipped with a bird’s-eye view, I observed a sight previously unknown to me as 5,000 people dressed in head-to-toe white descended on the waterfront landmark last Thursday at 6:30pm. Hauling carts, rolling shopping totes, and planting picnic baskets on the grass, they set up tables and chairs, pushing them together to form long rows that took over the park and its surrounding grounds in their entirety. In a matter of minutes, the fairly empty park became the site for the world’s largest secret outdoor pop-up dinner, also known as Le Dîner en Blanc.

What once started as a friends-only dinner, has become one of the most coveted food events of the year. Born in 1988, Dîner en Blanc began when founder François Pasquier returned to Paris after a few years abroad and decided to throw a reunion dinner party to reconnect with all his friends. After many expressed their wish to attend, he hosted it at Bois de Boulogne, a large public park in Paris, and asked all attendees to wear white so they could easily find each other on the grounds. With each guest instructed to bring a friend, the dinner ended up being a hit—so much so that it was hosted again the next year with even more attendees.

Four years (and dinners) later, Pasquier took the event to the iconic Ponts des Arts, the bridge known for its “love locks,” in Paris. Fully aware that such an occurrence could be frowned upon by the authorities, the founding group kept the location secret until the last minute, sparking a tradition that is in place up to this day. Since then, the event has taken place along Paris’ most scenic landmarks including the Champs-Élysées, garden of the Palais Royal, Le Louvre, and, most visually memorable, in the garden of Trocadero situated in front of the Eiffel Tower.

In 2009, Aymeric Pasquier, son of François, hosted the first international edition of Dîner en Blanc in Montreal, Canada, where he was living at the time. Two years later, with the help of Sandy Safi, Dîner en Blanc made its debut in New York City on the current Brookfield Place grounds. “I didn't know if it would work or not because the French culture is a bit unique,” says Aymeric. A thousand attendees that made it out proved that the event would become an international phenomenon, though. As Aymeric says, “If you’re going to make it in New York, then you're going to be able to compete in the rest of the country."

He was right. Following the success of the North American celebrations, Aymeric and Sandy established Le Dîner en Blanc International in 2012, which has since hosted dinners in more than 70 cities and 25 countries worldwide stretching from New Zealand and Israel to Sweden and Vietnam. Aymeric links the popularity of Dîner en Blanc to the comradeship and participation of the attendees. “It’s a special event where everybody contributes to creating the magic. The guests are not passive, they are really active in their event, and so it brings a special vibe,” says Aymeric. “It becomes like an annual rendezvous where best friends of best friends gather, and it gives a special energy to the group gathered together.”

Despite the rapid expansion, the cornerstones of the original Dîner en Blanc stayed the same: the location remains a secret, the most picturesque settings are chosen, everyone wears white (down to the accessories), and once registered, participation becomes mandatory regardless of weather conditions. Yet, from city to city, no event looks like the other. In New York, Aymeric points to the fashion. “New Yorkers are unique in their way of dressing. I'm impressed every time I go to New York how fancy and good-looking they can dress,” he says. “They have style, and they really commit, they don’t do it halfway.” That says a lot considering the fact that most lug a folding table, chairs, and a picnic basket comprising of food and non-plastic stemware, dinnerware (also white), and utensils to a meeting place, and then on the subway to the venue. Picking the location, according to Aymeric, is no easy feat, particularly in New York. "We look for locations that are private and that can make room for all the people attending. We also want a venue that is central, in Manhattan, and close to one or two subway stations" he says. "It's very restrictive, especially for the price we charge [$35 per person to cover the venue, security entertainment costs, plus $5 membership fee], and which we really want to keep low."

This year’s Dîner en Blanc not only had its share of memorable fashion (men in tuxedos and hats, women in gowns and masks) but also had some pretty picturesque views. Overlooking the Statue of Liberty and accentuated by the most scenic sunset New Yorkers have seen in a while, Robert Wagner Jr. Park was at its peak glory. As a live jazz band set the mood, the attendees primped their tables with white linens, napkins, flowers, flameless candles, elaborate centerpieces, and even a makeshift pergola in one seemingly coordinated move. While some opted for their own four-course meals (ranging from oysters and caviar to elaborate charcuterie plates and restaurant-worthy main courses and multitiered desserts), others bought catered picnic baskets courtesy of four-time James Beard Award-winning chef Todd English. While in New York guests are prohibited from bringing their own alcohol to a public park, they were able to purchase wine and Champagne from Apothic Wine and Moët & Chandon respectively. "After everyone has arrived, and it's more relaxed and quiet, a special vibe takes over," says Aymeric. "This is an event for people who love fashion, eating well, and a nice occasion to drink Champagne."

That "special vibe," which could probably be credited to the planning paying off, is one that I felt observing the scene a few moments before the evening’s beginning was announced at sundown. As a harbor unit ship sailed by, ringing its bell and spouting water, all the guests got up to wave their napkins in the air and cheer, a tradition that makes for one spectacular visual and the feeling of being in a different place and time. It’s incredible, given the size of the event and current climate, that the authorities allow for such an event. Aymeric attributes that to the organization and planning (often as long as two to three months) involved. Registration to participate happens in three stages: Phase one is for members who attended the previous year; phase two is for new members who are referred by phase one attendees; phase three is for people who signed up on the waiting list (currently 45,000 in NYC) on a first come, first serve basis. To ensure that the location is kept under wraps, groups ranging from 100 to 300 people meet at assigned meeting points (23 of them in Manhattan) and are escorted by volunteers down to the venue, ensuring an air of mystery and thrill of the unknown up to the last minute. “Specific preparation is very important to contribute to the experience and to add a bit of flavor the night of the event,” says Aymeric.

For first-timers, he recommends getting a cart to carry all the items and bringing a camera to “capture the magic.” In true Francophile style, he suggests women wear white flats while walking from the subway, opting for a pair of heels once they reach the location. As guests begin to dine, they are encouraged to engage with other guests sitting next to them and even share their meals. “Grab a seat and you will have other friends at the end of the night,” he says. “It’s part of the evening, to create a new group of friends.” Eventually, the lighting of the sparklers signifies the opening of the dance floor, already occupied by pairs of swing dancers that help set the of-a-different-era atmosphere. The quintet is soon replaced by a DJ, and guests end the night by dancing under New York’s City’s stars.

When the evening came to an end, as signaled by a trumpet, as quickly as the crowd descended, it disappeared, picking up all belongings, leftovers, and litter. With every trace of the party gone, the park is dark and once again empty, and you are all but left wondering if the event ever happened at all.

Scroll below for photos from this year's event.