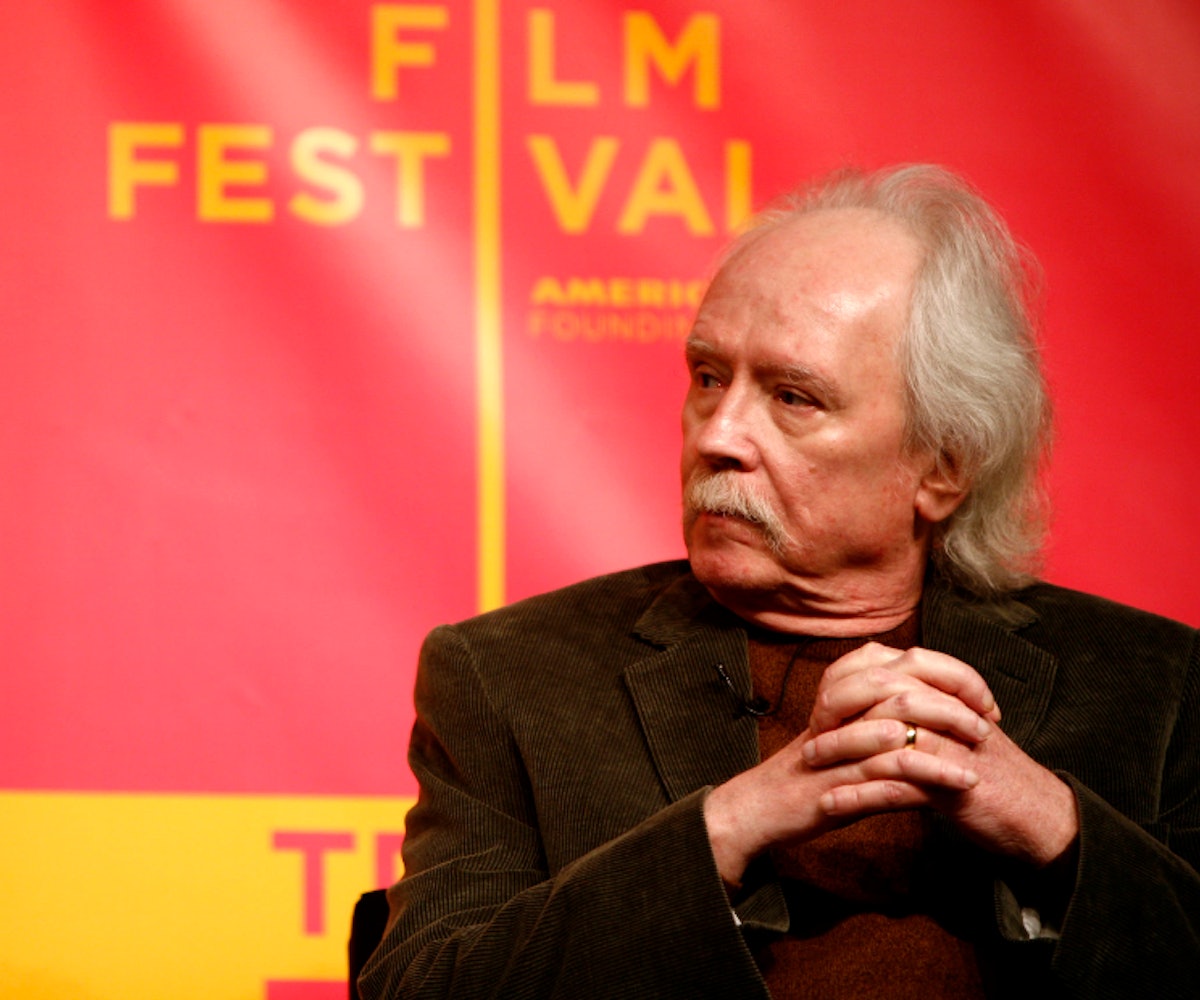 On some level, every day is a John Carpenter movie.moreEven if we’re not fending off knife-wielding psychos in whitewashed William Shatner masks or running through dystopian metropolises, we all face challenges that can make us feel like protagonists in the iconic filmmaker’s sci-fi and horror classics. Now, there’s a soundtrack for our daily adventures.

It’s called Lost Themes, and it comes complements of Carpenter himself. Over the years, the director has scored most of his own films, including Halloween and Escape from New York, and he’s developed a sparse, icy, synth-driven sound that can be terrifying and thrilling in equal measure. Lost Themes is the 66 year old’s first non-soundtrack album, and while it arrives sans accompanying images, its nine tracks of propulsive blips and chilly atmospherics evoke car chases, prison breaks, kung-fu fights, and other hallmarks of his cinematic canon.

Lost Themes drops Feb. 3 via Sacred Bones, the killer Brooklyn indie label behind records by Zola Jesus, Crystal Stilts, and Carpenter’s contemporary, David Lynch, among others. In advance of the release—as well as next month’s retrospective of his films at the Brooklyn Academy of Music—Carpenter talked with us about his songwriting process, his fondness for synths, and when he might make his return to the big screen.

At first, due to the title, people thought this album was going to be made up of film-score outtakes. But it’s all original stuff, right?It’s all new. A couple years ago, my son Cody and I, we’d get together, and we’d play video games for a couple hours, and then we’d go downstairs to my Logic Pro setup and play music for a couple hours. Over a period of time, we developed about 60 minutes of improvised music. Basically themes—a little bit like music that is designed for the movies in all our heads. Everybody seems to have a movie in their mind. Around the same time, I was looking for a music lawyer. When I found one, she said to me, “Do you have any new music?” I said, “Well, I’ve got this stuff Cody and I did.” I sent it to her, and a couple of months later, I had a record deal. That’s it.

Had you heard of Sacred Bones?I’d never heard of it before, but they’re really nice people. I like them a lot.

In the last few years, people have cited you as a major influence on stuff like the Drive soundtrack. Were you aware of your influence on electronic music?I’ve heard that before. I’m not that aware of it. It’s nice to hear. I’m not sure I totally agree. I don’t hear the same things others hear. But I accept it. I like it. I’ll take it.

There seems to be something timeless about minimal synthesizer music.That’s good to hear. I like that. I like everything you’re saying.

Back in the day, you used synthesizers as a matter of necessity. You could get a big sound with one piece of equipment. What draws you to them now?The principle still goes. You get a big sound out of a keyboard. And you can sound good, which is very appealing. It’s just really fun to play and create. This is the first time I’ve been working without an image. I don’t have to worry about taking care of any images. I don’t have to score to an image. I can simply score to whatever I feel like. It’s just freeing. It’s awesome.

When you were improvising these tracks, did you picture movie scenes in your head?After it’s done, yeah. But it’s all improvised. It’s made up as we go along—working out and putting together melodies and songs and ideas. They just grow. They start, they begin to grow, and it takes on a life of its own.

Would it begin with a riff, generally?A riff sometimes. Sometimes a beat. It’s all different. All of a sudden, you start going, “That sounds pretty good. Let’s try a little more of this.” I can’t tell you how much fun it is. It’s just fun. Man.

You’ve said that you’d like these songs inspire people to create their own visuals. Do you hope people send them to you?Not necessarily. I just hope I can be of service, or I can stir something up. That’d be fun to do.

Do you have any ideas on what types of scenes these songs should inspire?No, that’s up to you to do. I don’t want to do any work. Hell, I already work hard enough.

Any plans to take this record on the road?Well, you never know. We’re not thinking of that yet, but it would be fun, wouldn’t it? It would be an expensive proposition. You can’t do that on the cheap.

You were in a band in college, before you started making movies. Did you ever tour?I was, yeah. No, we just did cover songs. We played locally. We played a lot of fraternity parties and watched all the fraternity members get really drunk.

Did you like being onstage? Is it something you still think about?I don’t know about that. There’s good and bad to it. Playing music is definitely pressure—without stress, without having to meet a deadline, without having to score a movie and turn it in. That’s the biggest thrill of all of this. It’s all pure—I’ll put it that way. It’s all for the sound of the music.

Working with your son, was it totally collaborative, or was it mostly your ideas that he’d help you flesh out?Totally collaborative. A lot of that stuff in there is his sketches we branched out. I also worked with my godson, Daniel Davies. It’s a whole family deal. I’m trying to exploit these kids so I can retire.

Your last movie, The Ward, came out in 2010. Do you have any film or TV projects on the horizon?Maybe. I’m working on a couple of things, but I’m in no rush. There are a lot of interesting projects that are circling around right now. It seems like an interesting time. We’ll see. That’s all I can say. We’ll see what the gods bring us.

David Lynch is another director who hasn’t made a feature in a while, but he’s gone off in other directions, doing digital shorts and things. Is that something you’d pursue?I don’t know yet. I don’t think so. I’m just happy to be doing what I’m doing right now. We’ll just have to see. It’s all in the future, my friend.

Is it harder to get a feature made nowadays?Oh yeah, it’s different nowadays. It’s always been pretty hard to do. You have to pretty lucky, and you have to be in the right place, and all these clichés people talk about. It was hard then; it’s hard now.

It seems like it should be easier for someone considered a legend like you.The movie business has always been and will always be for the young. And I’m not young anymore, unfortunately.

Has filmmaking become like music, where, thanks to technology, you can make something pretty great on your own? Or do you still need a pretty massive budget to make something that looks decent?You don’t have to have a massive budget. You can make low-budget music and low-budget movies. You just have to scale your expectations. But now, it can still be done. It’s hard, but it can be done.