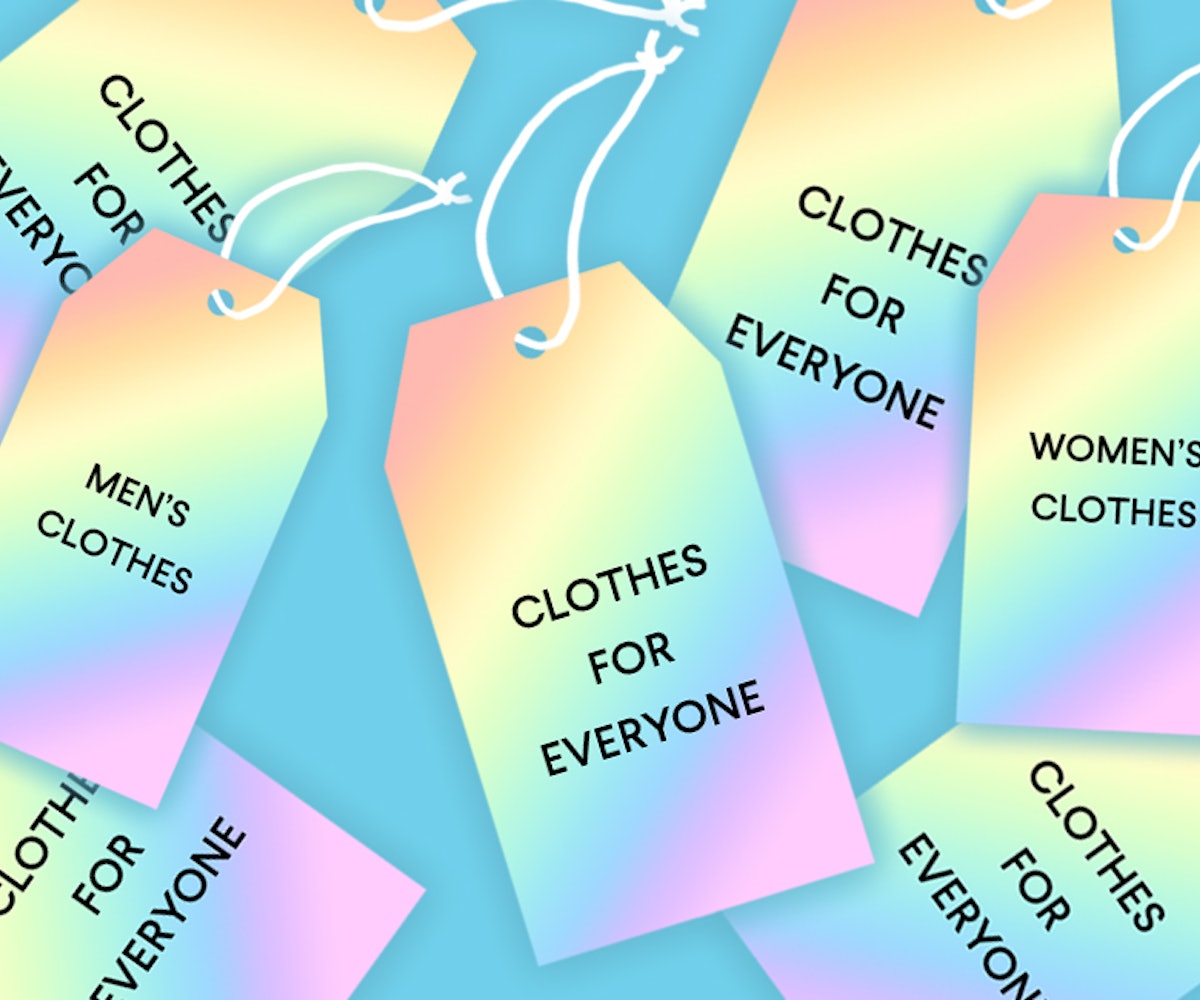 My partner was looking for that perfect pair of summer shorts: black jeans that cut off at the knees and loose, but not too baggy. We headed to Herald Square in Manhattan, where we were met with a barrage of rainbows. I felt a familiar sensation of dissonance as I passed Pride signage hanging in Levi’s, American Eagle, and the Gap. Major retail brands are not often queer-friendly, as alienating binary gender norms are built into the fabric of how clothing stores operate. My partner, who is gender non-conforming GNC and frequently misgendered in stores, has a particularly frustrating time. Yet here we were, passing a poster of cis and trans people alike wearing shirts that read End Stigma. As they described what they were looking for to an employee, I had hope that maybe this time would be different.

The employee looked my partner up and down, and I surmised her familiar calculation. Men’s or women’s section? Finally, she pointed us to the women’s section, where she recommended the “boyfriend jeans.” We thanked her and moved on. Our experiences at American Eagle and the Gap yielded similar results. We were immediately ushered to the women’s section both times. At the Gap, an employee earnestly persisted in asking what gender the shorts were intended for, despite us specifying our indifference as to which section the article of clothing came from. My partner took it in stride, but it was frustrating all the same. I love my partner, and they deserve to go into a store feeling confident and come out with clothes that make them feel great. I decided to do some digging.

I had to wonder if there was any training that teaches employees how to assist LGBTQ+ customers. The irony felt potent: Brands were adamantly promoting LGBTQ+ people, but they didn’t have the language to communicate with the demographic. The next day, I decided to find out. I called the Levi’s, American Eagle, and Gap corporate lines, customer service lines, and 34th street store lines and asked one question: “During Pride Month, do you offer offered training to your employees to help assist LGBTQ+ beyond the content provided in the Pride signage that is put up in stores?”

“We tell our employees to be friendly and open,” a voice at the 34th street Levi’s store responded. “We try not to make assumptions about people in general.” While this sounded like an honest effort, the answer was ultimately a no. Telling employees to be open is not the same as giving them vocabulary with which to communicate with LGBTQ+ people. I then called the American Eagle corporate line and was told that no extra training exists for educating employees about helping LGBTQ+ customers. In lieu of answering my question, a Gap customer service representative encouraged me to read about their partnership with the United Nations Foundation, as Gap will, to their credit, donate 30 percent of their net sales from Gap brand’s Pride T-shirts to the UN’s Free and Equal organization.

Some basic research into retail pride promotion was similarly encouraging. American Eagle, for example, is stepping up by partnering with and donating proceeds of their campaign to the It Gets Better Project. Across the street, we saw Levi’s, which has contributed more than $70 million to HIV/AIDS organizations over the years, which is nothing to sniff at. Many brands are making strides in supporting the LGBTQ+ community, both ideologically and monetarily, but there is still progress to be made.

Despite the lack of malicious intent, covering a store in rainbow signage while neglecting to make the store queer-friendly is not only painfully ironic—it’s disingenuous. This signage signals to queer people that an establishment is a Safe Space. Safe Spaces have been fundamental to queer organization since the Stonewall era when being LBGTQ+ was criminalized. Markings like rainbows were essential not only to signal that queer people would be physically safe, but that they would find a space of like-minded people. If the employee standing beside the rainbow display doesn’t have the training to assist a person represented on the flag, there’s a problem. Our symbols of safety lose their meanings.

With this obvious dissonance between message and practice, I decided to go to the source and ask queer people working in retail about their experience. Jess Flore*, a sales associate at Marshalls in Austin, Texas, says that when she sees someone who appears “uncomfortable going to the section where they want to look for clothes,” she springs into action. “Especially in pretty binary stores like Marshalls, I love being ‘other’-looking enough to help them feel comfortable being themselves while shopping,” Flore says. “Strength in numbers can be really important, especially in Texas!”

Former Abercrombie manager Sue Owen* explains that institutions themselves need to change. “Giving people of different identities staying power by displaying them both in ads as well as having them work in-store would be a way to affect change,” Owen says. “By normalizing it, they can show that they are accepting of people regardless of gender identity and expression.”

Brooklyn-based sex toy boutique employee Ariel Martinez also says that “the most striking thing about mainstream retail is how aggressively language is often gendered when there’s no need.” Corporate clothing brands could certainly take a page from sex-positive retail spaces, as employees are trained to facilitate an atmosphere where desire can be expressed openly and non-judgmentally. “Although it's polite to greet customers with 'ladies' or 'sir' or 'gentleman,' that's also completely unnecessary,” Martinez adds. “I'm a huge advocate of 'y'all'—I’m from Texas—but know other people use 'folks.'”

There are obviously no easy fixes to the gendered way in which society functions. Making sure employees know how to help customers navigate around these structures during Pride Month, however, is essential if one is going to cover their store in Pride signage. A flyer on respecting people’s non-binary pronoun usage would be a start. Directing visibly non-binary customers, or any customer for that matter, to the men or women’s section without asking what they are looking for is another idea. Corporate Pride efforts must transcend the message that LGBTQ+ people have the right to exist, and a right to be seen.

* some names have been changed to protect the identity of interviewees