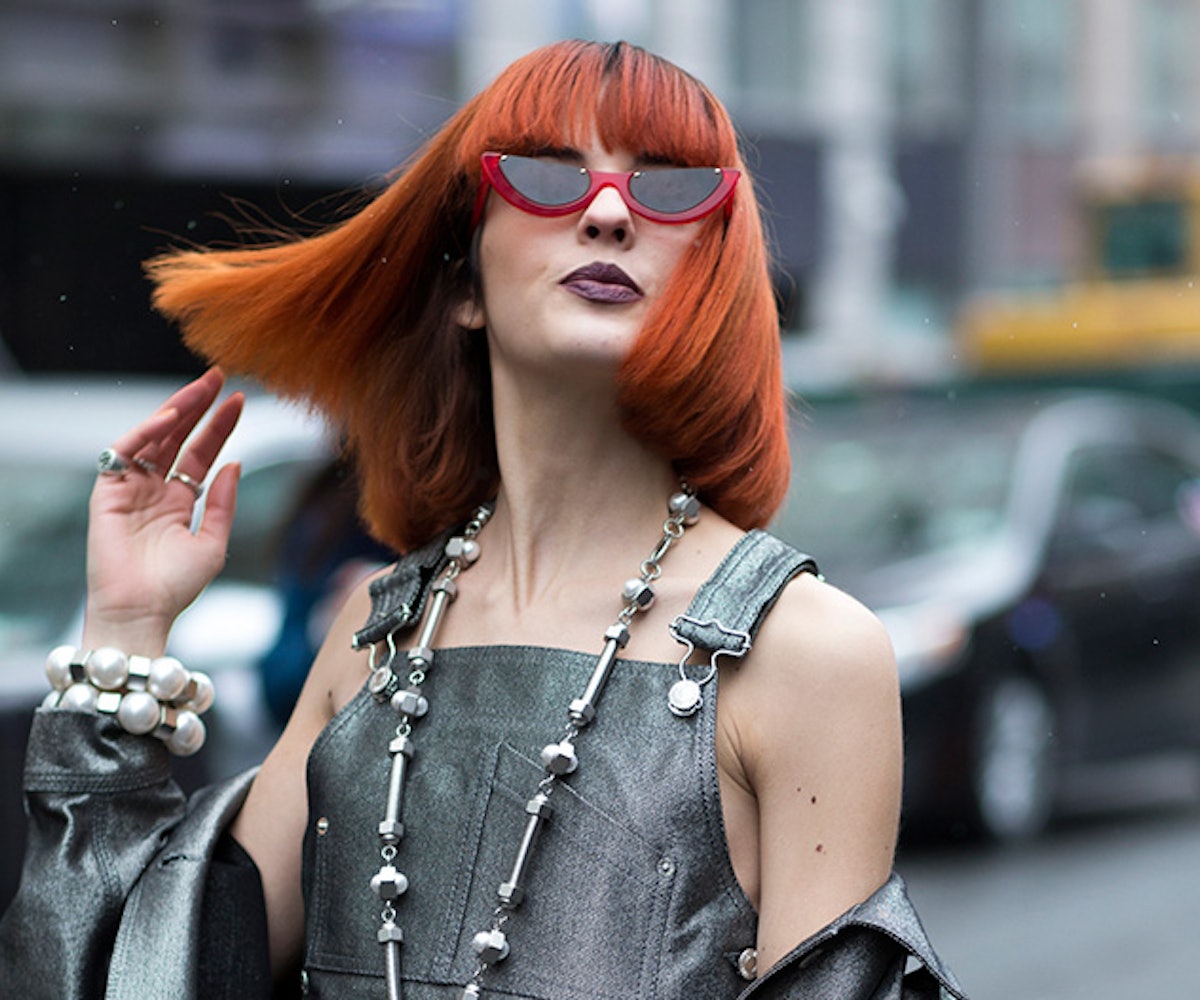 To outsiders, New York Fashion Week probably seems like one big, well-dressed party. It is, but it's also a nightmarish seven days of running around, not sleeping, panicking over low batteries, and answering the same question over and over again: How's your fashion week? The response is usually some variation of "I'm surviving," before taking another big sip of some free alcohol at an after-party filled with somebodies. It's also an incredible privilege that no one can really complain about. Getting behind the proverbial velvet rope is exhilarating. Seeing so many people who are so committed to their style is inspiring. It's those moments that make surviving easy. Of course, there are also essentials we've come to swear by. Everyone has their own routine for staying sane, some more complicated than others. Ours is pretty simple—like five steps simple. In fact, these tricks worked so well, we just might carry these rituals over into life outside of fashion week. See for yourself in the gallery ahead.

How anyone manages to get around in heels all day is a mystery I have no interest in solving. Give me comfortable shoes or give me nothing. Dr. Martens' Jadon boots are my go-tos. There is close to zero chance of me slipping in the snow and these boots can take whatever you throw at 'em and, despite being a little heavy, are pretty comfortable. Plus, the platform is a nice bit of edge. Thanks for noticing street style photographers.

With all of the running around during the day and late nights writing recaps and producing social content, sleep becomes a luxury that simply does not exist. We all have our secrets to making it look like we've slept the night before, but I've narrowed mine down to two, very important steps: Clinique's Pep-Start Eye Cream and eye drops. Peptides are things your body naturally makes that affect collagen production. Eye creams tend to use synthetic peptides that mimic the real deal. Some creams are heavy, but Clinique's is the lightest one I've ever used. It went on smooth, brightened my eyes, and didn't leave the skin feeling too oily. About halfway through the week, I was told to try keeping the cream in my fridge at night. I started doing that and almost instantly, the fatigued puffiness surrounding my eyes went down. Drop a few eye drops in, and those four hours of sleep will look like a rockin' seven. Talk about a miracle product.

This should be a given. The iPhone's battery is not anyone's friend—especially when you're Snapchatting, Instagramming, and Periscoping show after show. Firing off all those emails in-between sucks the juice life out of your device, too. mophie really nailed it with its new design. The battery back is slim, lightweight, and protective. Charging my phone at the end of the day was such a relief. No more worrying about packing a charger in my bag because the charger's already on my phone!

A lot of NYFW shows happen near Manhattan's Meatpacking and Chelsea districts, mostly around Milk Studios. Right next door is Blue Bottle Coffee, which makes some of the most delicious blends out there. I brew a cup in the morning, before heading out, and usually pick up a cup whenever I'm nearby. The caffeine kick from its Giant Steps dark roast blend is welcome, but it isn't harsh or jittery like other coffees. Blue Bottle's on to something real neat with its goods.

Based on all the street style shots, fluffy clutches were in this season. Backpacks free up your hands, though, which makes using your phone a whole lot easier. This lil' backpack also has two thick studded straps that fit nicely, not to mention conveniently, over a big coat. The interior manages to hold all the essentials, too: planner, passes, makeup bag, keys, and a notebook or two. It's also lightweight, which made getting around a breeze. For reasons I won't disclose, I discovered that it's fairly waterproof, too. This bag was basically the yin to the yang of NYFW.