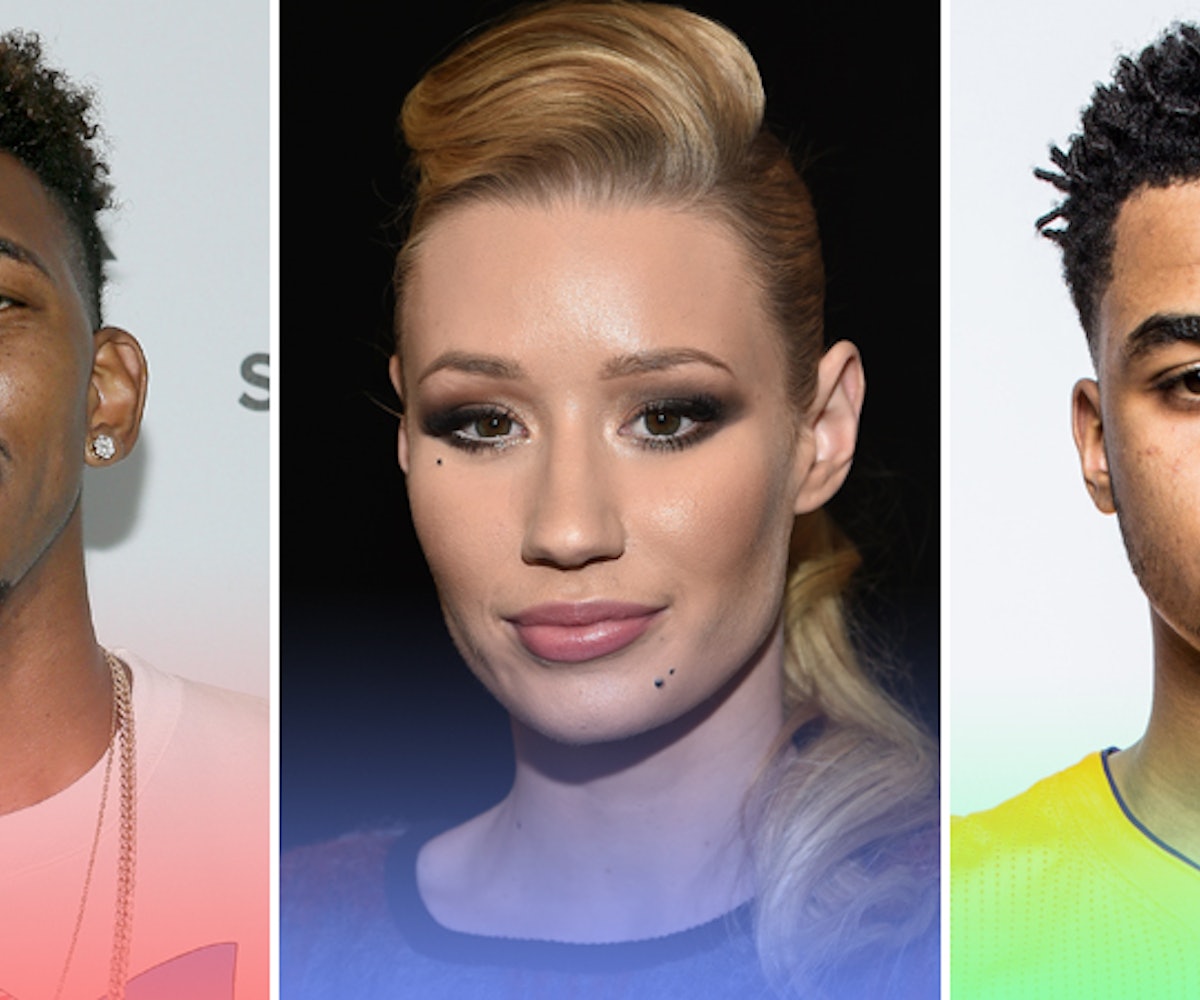 In today's "big celebrity news," there's some ugly stuff about slightly problematic and possibly appropriative Iggy Azalea. As unseemly and tawdry as it is, it’s making us ask a some legit questions about what it means to be a person with decency.

Let's recap: Recording artist Iggy Azalea is (or was) engaged to Nick Young, of the Los Angeles Lakers. Also on that team is the somewhat better basketball player, D’Angelo Russell, who allegedly leaked a video of an encounter with his teammate in which Young appears to admit to having sex with a 19-year-old woman outside his relationship with Azalea and without her knowledge. You can go over here for more including the video and what Azalea has tweeted since.

While it’s just still so unclear how this video became public, we had a heated discussion about where and when we all draw the line at fidelity. While a public leak isn’t how anyone should find out they’ve been betrayed, when does a friend need to step up? Or when does a friendship come under fire because one party decided to stay mum on the subject of relationship tomfoolery?

Leaking a video is kind of an extreme example, but we've asked ourselves some hard questions. Stepping forward is hard, but sometimes necessary. Or is it? Here's what we thought.

In the past, my friends have merely given someone their number and then nothing happens from there. In the few cases where a line of betrayal has been crossed like, let's say a kiss, I didn't tell their significant other because I did not have a relationship with them. (Literally, we're not friends on Facebook, Instagram, Snapchat, Twitter, or IRL.) I especially don't feel obligated when I know that said person will not be in the picture long-term. It sucks, but that's how it is for me.

It's really tricky if your friends date each other and you're all in the same friend group though. This one time in college, a former friend of mine was dating this guy she met at a frat party—she was starting to develop strong feelings for him and really saw a relationship blossoming before her eyes. Over the weekend, I found out that her roommate had hooked up with the same guy during some sorority field trip thing. She didn't tell my friend, but I found out because the guy was in the same fraternity as one of my friends. Now mind you, this guy and my friend were not in an official committed relationship, but I didn't want my friend rushing into something serious with a guy that she clearly didn't know as well as she thought she did.

Personally, I would expect the people I surround myself with to come forward and tell me if something shady was going down with someone I'm involved with so I try to do them the same courtesy. I went to my friend and told her about what happened because I cared about her and didn't want her to get hurt. I mainly expected her to terminate her relationship with the guy, which she did, but unfortunately she ended up having a big falling out with her roommate too. It was so bad that she had to move out (which I did not see coming) and I felt terrible because I basically caused the end of a friendship.

Shortly after this all happened, I made amends with the roommate. She wasn't mad at me for what happened, but wished that I had come to her first when I found out about it. After that experience, I started to re-think how to approach these types of situations. If the relationship is serious, I think someone has to step in for the sake of that human being. Nobody deserves to be treated like crap. If being directly involved isn't how you want to go about it, you can try to find another way. If someone was cheating on my friend and I had evidence, I would show and tell them without hesitation. If one of my friends was in a relationship with another one of our friends and cheated on them in front of me, I would have to say something but would probably try to approach the cheater first. Obviously, don't leak their business on the Internet though. That's very immature.

Personally, I've got to say that Young made his own bed on this one—and I meant that pun. The pain he caused Azalea, if this is all true, is all on him. Yeah, Russell is also an awful human being by leaking it to someone who leaked it (or whatever actually happened), But Young had to know that, in being famous, this was kind of bound to happen.

That said, I don't know if I would out a cheater. Certainly, I would feel no fear about confronting a cheater, but I don't know if it's actually up to me to reveal what's going on to the victim or, for that matter, the world at large. I would prefer to spend my energy and time badgering the cheater until they confessed themselves (I'm good at badgering). Victims of cheating have the right to know—I just don't know that I have the right to tell them.

I think ultimately everything depends on the situation and my relationship with the person, the significant other, and the person who is pursuing/being pursued by my friend. As someone who has been cheated on multiple times, has cheated myself, and had been the "other woman" when involved with someone else (gosh I sound awful, don’t I)—I know that the act of cheating really sucks. Still, it really depends on the situation and my relationship to all parties involved whether I would take action or not, because at the end of the day it’s really not my business. I am protective of my friends, no matter what side of the situation they are on, and would do anything that’s in their best interest.

My best friend cheated on her boyfriend with whom she has a very serious, strong, and happy relationship with. I watched the first signs of it, and I tried to veer my friend in a different direction, but ultimately I have no control over her. She has gotten past it without telling her boyfriend, and I would never cross my friend even if I don’t think it was the right thing to do.

The more you intervene, the more you risk pissing people off. If your friend is getting creeped on, ask them how they feel about it and go from there. If they don't care and have handled the situation, leave it be. You know your friend best. If they don't care but aren't doing anything about it, step in, if you feel comfortable. If they're doing the creeping, offer your two cents. You can't change a human, but you can influence one. If shit hits the fan, pulling the "Told you so" card is the kiss of friendship death.

The only way I would tell my friend they were being cheated on is if they asked me if they thought their relationship was okay, and even then I'd probably be vague. That's one time I don't think I could handle being the bearer of bad news.

I'm vaguely in that situation at this very moment—sans Iggy, fame, or a sex tape. My two dear friends are breaking up, and in the past year both of them have had emotional affairs with other people. Since my loyalty is shared, and on some level I knew they'd either come back together for good or keep drifting to a split, I kept their secrets to myself. I don't think I'll ever tell the two of them about their respective "things." If I felt like it was uneven—in love, or care, or if someone was feeling suspicious/confused, I'd badger the person doing the most harm.

I find infidelity is almost always a symptom of something else—deep distrust, insecurities, or resentment. I've cheated on partners. Likely related, I don't ascribe to "cheaters are forever awful" rule. It makes me pretty patient when someone I love is cheating on their person, but I also push people to make a decision sooner rather than later. Why are you cheating and what does it mean?

I agree that it was potentially inevitable for her to find out—but I don't necessarily know he "had it coming," and personally, I don't care to form an opinion on that. Who is to say what someone has coming? People cheat on each other all the time and I just couldn't care. The only thing that matters is what you decide with your partner and whether or not you remain honest to that—no one else should get involved.

I appreciate letting your friends know—and I actually think in the early stages, that makes sense. If you see your friend getting wooed by some DB, by all means, get in there and give your honest opinion. But in something long-term, where people have been together for several years, I think it makes much less sense and one should stay away (outside of something very serious, say, witnessing this person committing a crime or assault of some sort that will actually put your friend in physical danger).

Long-term relationships are extremely challenging and maintaining notions of loyalty creates problems. Loyalty can be mistaken for appropriating your own view of the world and pushing opinions onto someone else, when they very well might not want to know or hear your opinion. In other words, you don't like knowing that someone is cheating on someone else because you think about how wronged you would feel if you were that person and someone were cheating on you. But this feeling is completely hypothetical—you are not the one being cheated on, you are the witness—and in some ways this makes telling the other person a selfish act. Wouldn't you want to know, because if I were you—I would want to know? Shouldn't you live and think just like me? I would.

Going further, the very notion of there being a moral obligation to "tell the person" is too closely tied to the puritan roots of our American heritage, and for that, I wholeheartedly reject the idea that anyone should get involved at all. By "telling" the other person, you are reinforcing traditional contexts of relationships and societal values which say that monogamous relationships are the only type of relationship—and that rules must be followed accordingly.

This is a counterproductive use of human intellect and energy. Why should you, someone not in the relationship, be the enforcer of the rules? They have been completely made up, mostly by misogynist Christian egomaniacs who have shaped our history far too much to begin with. The debate over this particular apple doesn't fall far from the same tree that said the only type of relationship was between a man and a woman, and that eternal damnation awaited all else. Fuck that noise.

It's totally possible that Iggy and Nick have an open relationship. And if they do, then the fact that this video is out in the public eye may put them in an uncomfortable situation as a couple. But if they are in a closed, monogamous relationship, then it's probably better for Iggy to know before she takes the next step and marries him. Still, the fact that this video is circulating about is upsetting. Everyone deserves some semblance of privacy.

NEXT UP
Fashion
Balenciaga Will Reward You For Selling Your Vintage Bags Back
Entertainment
Soccer Mommy, Wet Leg, & 48 More Artists Made An Album For Abortion Rights
Life
NYLON Newsletter: October 4, 2022
Beauty
Kristen Stewart Brought Back Her ‘The Runaways’-Era Mullet