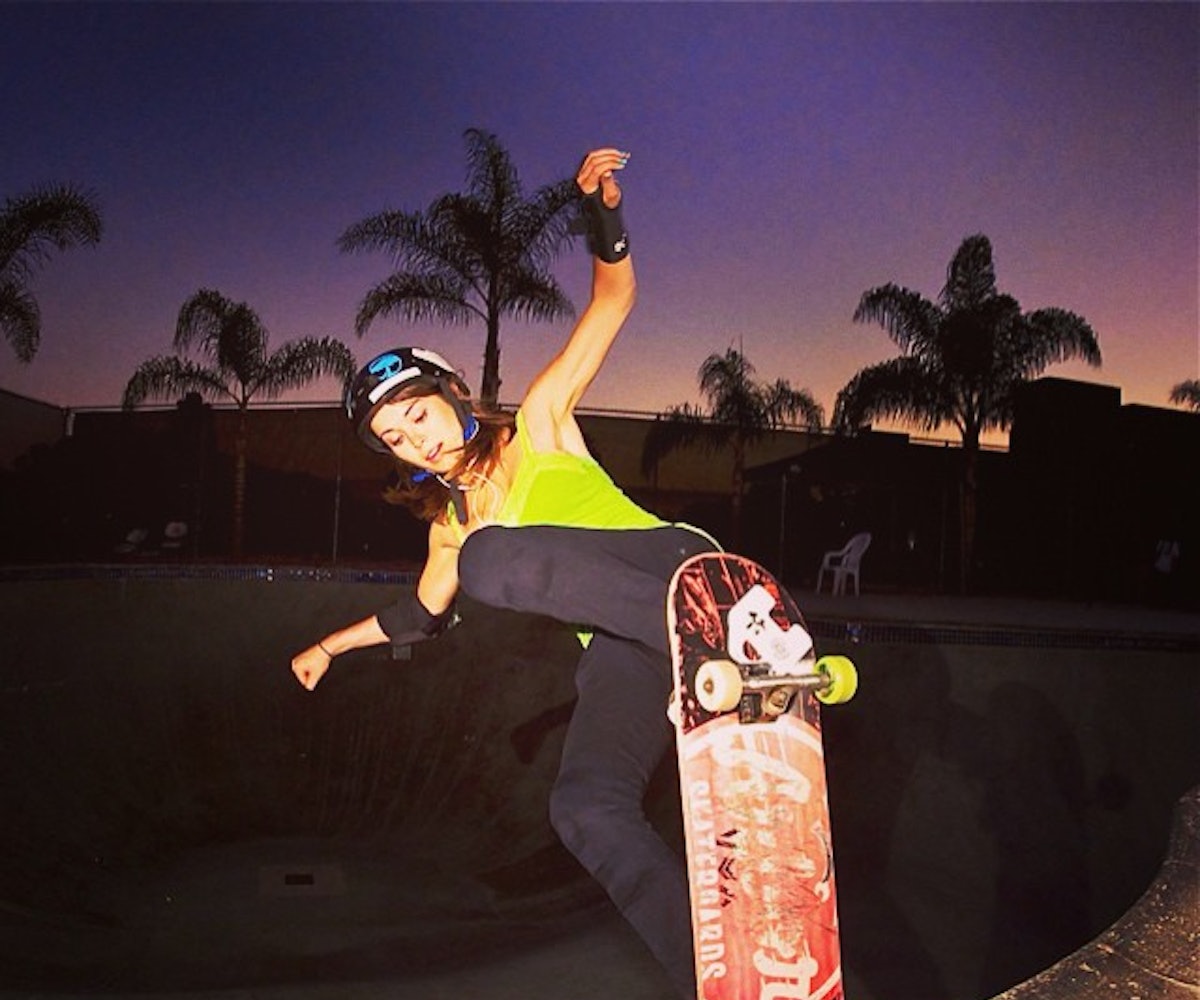 Avril Lavigne may have once sung an ode to a "Sk8er Boi," but that was then and this is now. Skater girls are in, and that's just how we like it. For a long time, skateboarding has been regarded as "too extreme" for girls, but it's time to debunk that myth for good. These 10 rad skater girls prove that this traditionally male-dominated sport is quickly becoming a stomping ground for women to show off their own skills. Their photos will leave you wishing you could skate like a girl.

Cara-Beth Burnside is not only an awesome pro female skateboarder, but she is also one of the very first to prove that women are also capable of participating in extreme sports. She began professionally competing against men at 23, and she has since paved the way for other skater girls to pursue their passion for skateboarding professionally.

Alana Smith doesn't let her age stop her from getting what she wants. She competed in her first X-Games when she was 12, and holds the record as the youngest X-Games medalist ever. She also has some awesome words for other young, female skaters: "Seeing younger girls starting to skate has made me the happiest person alive. Knowing that they can do a guys' sport—it's amazing."

Julz Lynn's aerial shots prove that she is second to no man. We're crushing on her not only for her unmatched skills on the skateboard but also for her badass ink.

Amelia Brodka has combined her two talents–filmmaking and skateboarding–to create Underexposed: A Women's Skateboarding Documentary, which sheds light on the female skaters within a sport traditionally regarded as one for men. Through the documentary, she hopes to "promote an increase of opportunities for girls and women who want to pursue skateboarding."

Lizzie Armanto found her love of skateboarding at age 14 and has racked up an impressive number of awards since then. Also, extra points for her mermaid hair.

Allysha Bergado may be petite, but her presence on a skateboard is enormous. Follow her instagram for incredible shots like this one as well as photos of her adventures with fellow skater girl, Lizzie Armanto.

As the first woman to win a gold medal at the X Games back in 2003, Vanessa Torres is pretty legendary. You can channel her badassery by playing her character in the Tony Hawk video game series.

If you've got a case of wanderlust as well as a hankering for athletics, you need to start following Eliana Sosco. Her skateboarding skills are incredible on their own, but when in front of colorful, dreamy landscapes, they reach a whole new level of inspiring.

If you're looking for your next fitness inspiration, Lauren Perkins is your girl. Not only is she a pro skateboarder, but she is also a snowboarder, a yogi, and a biker. The photos of her sporty adventures are enough to make you want to lace up your sneakers and get active too.

17-year old Beverly Flood turned pro last year, and she clearly has no intention of slowing down any time soon. Her skateboarding stills prove that she's got nothing but skill.