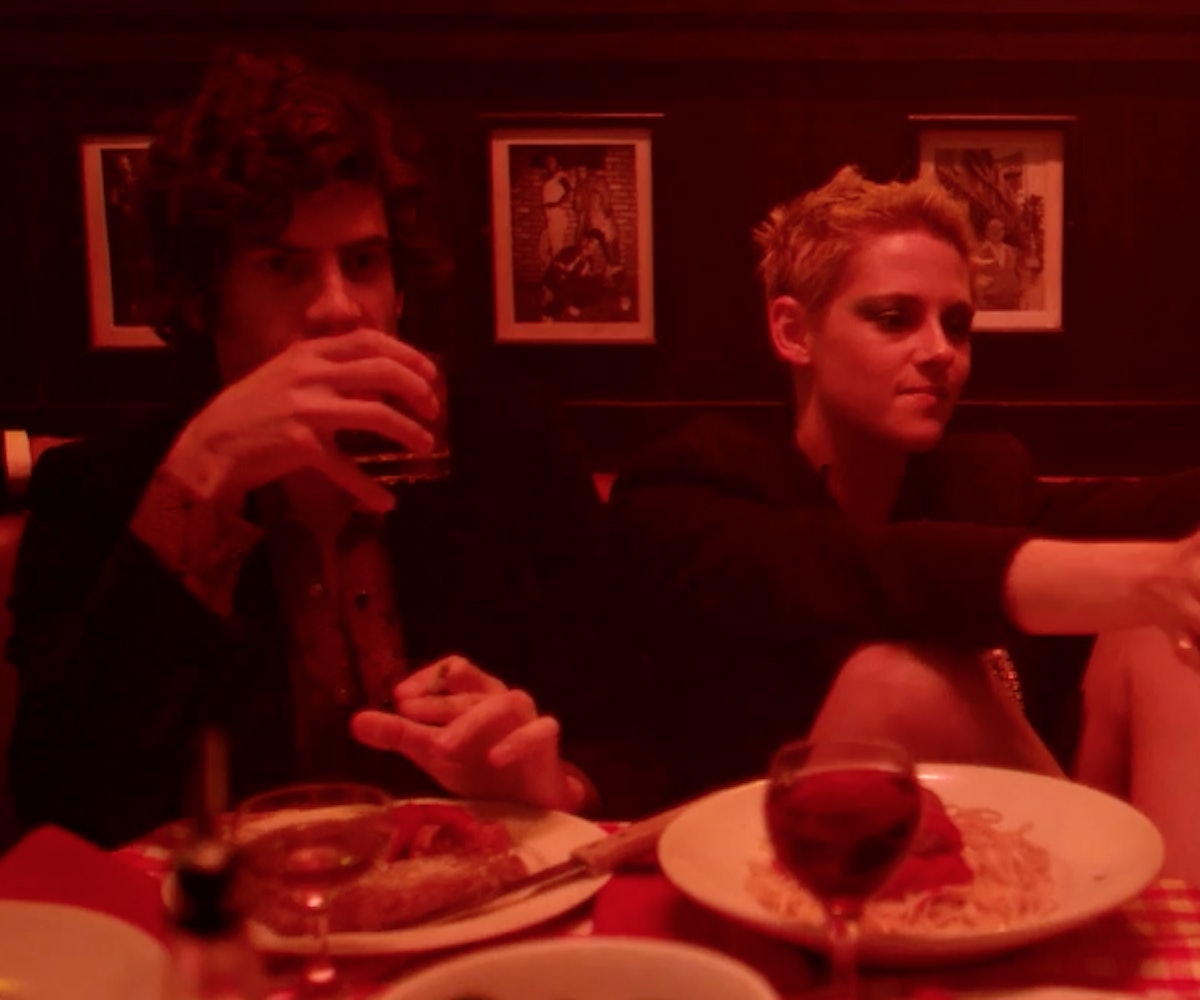 Going on a date with Kristen Stewart is no longer something that has to be left to the imagination, thanks to Interpol’s brand-new video for “If You Really Love Nothing.”

The Hala Matar-directed video follows Stewart’s character as she kisses her way through a red-lit Italian restaurant that’s equal parts slick NYC club and an episode of The Sopranos. Nihilistic and irreverent, Stewart’s character is a force to be reckoned with, especially for her downcast date, played by Finn Wittrock. He seems to be the last thing on her mind.

It’s a gorgeous video, so ahead of its release, NYLON sat down with Interpol’s Paul Banks to chat about everything from the band’s new record, Marauder, to his (frankly terrifying) vision of our future. Read our Q&A, below.

This record is a big shift away from the sound you’re known for. Why decide to do that?

It was our second record as a three-piece. So it feels like the continuation and evolution from [our last record] El Pintor, which was me on bass and just one less guy in the room. I think that this time we sort of had the confidence of knowing we could make a good record because we feel like El Pintor was a good record. I think we carried on with that creative confidence. I think that part of why it became so stripped-down was working with Dave Fridmann, who encouraged us when we'd send him demos. He was like, “These songs are written, and they sound good when you play them. Why would we add a bunch of bells and whistles if they sound good in the room?” We're such a rehearsed band before we get to the studio, I think he was really smart to say, "Why not just go straight to two-inch tape," which is a very committal way of recording. Normally you go into ProTools, and you can manipulate everything and overdub and take the best bits from 50 guitar passes and stuff.

Just as a band, we're also getting along better than we have in a long time. The vibe between us was really good on this record. I think that comes through as well.

Was it strange stripping away all of the bells and whistles though? Were there points where that felt somewhat uncomfortable?

No. I feel like we get used to playing the songs as a three-piece with me on bass. We sort of record my bass take while we're rehearsing and I switch over to guitar parts [for recording]. I felt like, I don't know, I'm making it my beeswax. If we want another harmonic angle, I'm doing it. We didn't even need the second guitar.

I think we just kind of have more confidence that the pieces that we create are enough and we don't need to lay too many multiple vocal tracks or too many guitar tracks… [Also, doing it this way], we were like, "Yeah, that's really human and really live and really interesting." It's actually a quality that you couldn't even simulate in ProTools because it's so human. No one would ever err on the side of that particular imperfection.

If you listen to old recordings or even Led Zeppelin, it's loose. I think that we were trying to be mindful of, “Hey man, you don't need the safety of all the corrected shit in ProTools.” If you're a competent band and the songs are written, just play them.

On another note, I know there are a lot of themes about surveillance and free speech, and it all feels pretty dystopian to me. Why choose to tackle something so bleak?

I think the world we live in now is a very fascinating place in terms of everything being recorded. On a song like "Surveillance," it's not quite so dystopian so much so as I got fixated on this idea that if we can go back and find a termite in amber that's three million years old and we can find out what it ate for lunch now... With all this data, artifacts of what our phones are recording and what satellites are recording and what CCTV is recording, in two million years, I feel like your ancestors are going to be able to flip through your life like a book. Even moments when you thought you were alone. I feel like if we can piece together that, they might be able to reconstruct even moments where you thought you were alone of August 13 of 2003 and just sort of watch your life.

What that kind of means to me, is that it's sort of like someone actually is able to see everything that you did and theoretically pass judgment on you. That's basically our concept of what God is, and Santa Claus. It's someone that can hold you accountable for everything that you did. The idea that through technology, that's actually possibly a pragmatic future—that could happen—it blew my mind. That through technology, we could be brushing up against what our own concepts are of judgment and religious examination of a life.

I just think that was just kind of interesting. Also just social media and the way people's careers keep ending, I don't know, man, it's a strange time with some very righteous movements in culture and some kind of weird ones.

Maurader is out on August 24 via Matador Records.

NEXT UP
Entertainment
Raye Explicitly Speaks Her Mind On Debut Album, ‘My 21st Century Blues’
Entertainment
Annie DiRusso Makes Indie Rock For Your Growing Pains
Entertainment
Muni Long On The Grammys, Burnout & Not Worrying About The Labels
Entertainment
Harry Styles Is Performing At The 2023 Grammys
Style + Culture, delivered straight to your inbox.