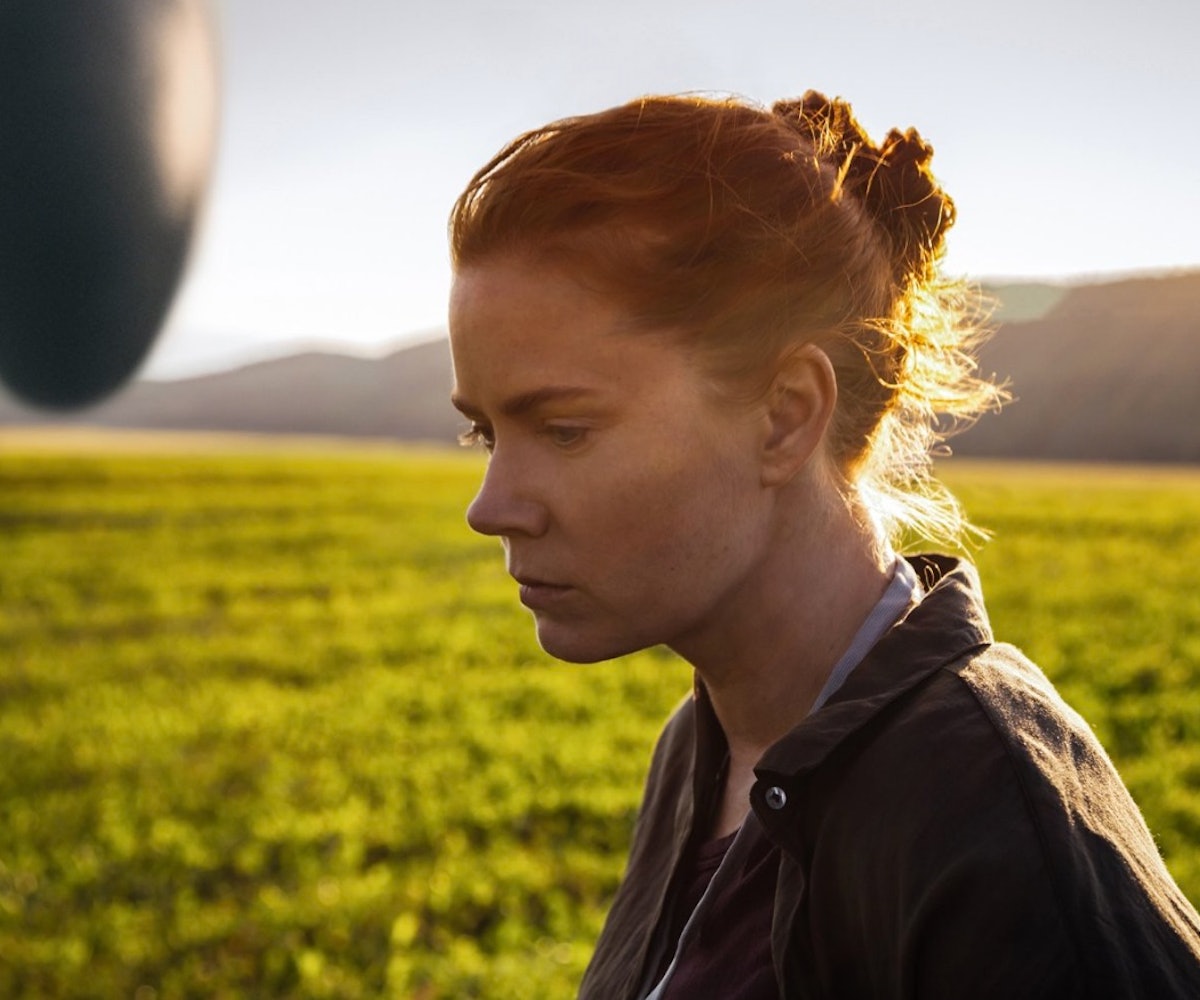 In the new movie Arrival, a sophisticated take on the alien invasion genre, large, unidentified objects descend through the earth’s atmosphere at 12 different locations around the globe. Their intent is a mystery. Are they hostile? Do they want to enslave humanity and harvest our organs? Or do they just want to meet the people who voted for Donald Trump and ask them what in the fuck they were thinking? After it becomes clear that the aliens are trying to communicate with humanity through indecipherable signals, the U.S. government recruits the linguist Dr. Louise Banks, played by Amy Adams, to figure out how to DM the extraterrestrials in the hopes of discovering what their deal is.

The movie, directed with precision and smarts by Denis Villeneuve, is basically an alien invasion movie for grown-ups. Whereas the visitors in movies like Independence Day and War of the Worlds seek to destroy with impunity for no other reason than because they can (and so directors can blow stuff up), the creatures in Arrival have motives that are unclear, and the movie, which poses philosophical questions about love and loss, tries to envision in a semi-realistic way what aliens arriving on Earth might actually look like.

But that begs the question: What might aliens arriving on Earth actually look like? Conspiracy theories involving extraterrestrials visiting our planet are nothing new, and the iconography surrounding them—grainy photos of flying saucers; little green men with oversized craniums—is pulled directly from the post-war science fiction of the ‘50s and ‘60s. Stories of alien abductions, secret government labs, and UFO sightings have peppered the public imagination for over 50 years. (The first reported abduction occurred in 1961.) And many alien invasion movies, from classics like The Day the Earth Stood Still to more recent examples like Mars Attacks! have shown extraterrestrials rolling up in spacecrafts of all shapes and sizes. How else would they get to earth from other galaxies that are million of lightyears away?

However, Jean-Luc Margot, an astronomer and professor at UCLA who specializes in planetary sciences, says that if we were to make first contact with another lifeform, it would likely not involve spaceships. “Interstellar travel is hard,” he told us. “Electromagnetic waves travel at the speed of light. It is far more likely that we will detect the presence of other civilizations by receiving a signal than by direct contact.”

That echoes the approach taken in the 1997 Robert Zemeckis-directed Contact, in which Jodie Foster’s scientist, Ellie Arroway, discovers radio signals from a distant, intelligent alien race who transmit a blueprint to build a complicated transportation machine. The movie was based on the book by pop astronomer and author Carl Sagan, which Jason Wright, an associate professor in the department of Astronomy and Astrophysics at Penn State, calls one of the most realistic depictions of alien contact in science fiction. Wright says that the species in Contact, like the aliens often depicted in the work of Arthur C. Clarke (2001: A Space Odyssey), is so far advanced that we can barely comprehend their existence. He says that any species human beings are likely to encounter in the real world would be just as advanced. “The planets in our solar system are over four billion years old, and you look at how quickly life arose on Earth, and life is billions of years old,” says Wright. “There’s no reason to think that if there is an intelligent alien species out there, that it recently came into being. So if there is intelligent life elsewhere in the galaxy, it seems very reasonable to assume that it is going to be much more advanced, technologically, than we are.”

That means that contrary to Margot's point about the difficulty of interstellar travel, it is conceivable that an ultra-advanced alien race could one day reach earth from the outer reaches of the universe. "It seems reasonable that if you give an alien civilization a billion years to develop technology, that its travel between the stars wouldn’t be a hurdle they haven’t overcome at some point," says Wright.

Oliver Fraser, who teaches Astro 101 at the University of Washington, believes that, should unknown spaceships ever reach earth, society would look to astronomers to figure out where they came from, a task he views with some skepticism. “Our skillset could extend to figuring out where the ships came from if we had observations from before they landed,” he says. “We do this with meteors already—if we have a track in the atmosphere we can make a pretty good guess about where in the solar system the object came from.” But Fraser says that large spacecraft, such as the monolithic ovoid vessels depicted in Arrival, seem unlikely to ever touch down on Earth. “Speed of light and all that,” he says, before offering an altogether different scenario. “Maybe it's much more likely that if we get colonized, it'll be on the microorganism level. Those beasties are much hardier than larger organisms, they can exist in extreme environments, and they (perhaps) can travel through space unprotected already. I keep hearing about how much our gut biome changes the way we eat and think already, I wonder if we were colonized by bacteria from another world, if we'd only notice if humans started to eat weird things.”

Some scientists we reached out to didn’t feel comfortable speculating what aliens arriving on Earth might look like from a scientific perspective, because that kind of speculation is in direct opposition to their evidence-based research. But if a spaceship the size of a football field were to some day—say, in the next four years—creep into our atmosphere and position itself over the White House, Independence Day-style, can we maybe suggest not blowing the whole thing up? Instead, maybe just grab the president—and the vice-prez—and take 'em along for the ride. Please and thanks.